Each year as we get more creative with our Halloween and fall decor, we sometimes forget the basics…like orange pumpkins!

When I was a kid, orange pumpkins were the only type we ever bought…Who knows, maybe they were the only available kinds of pumpkins way back when.  Nowadays, we have so many varieties to choose from that I think we tend to overlook the classics.

Today, let’s appreciate the simplicity and beauty of those traditional orange pumpkins! 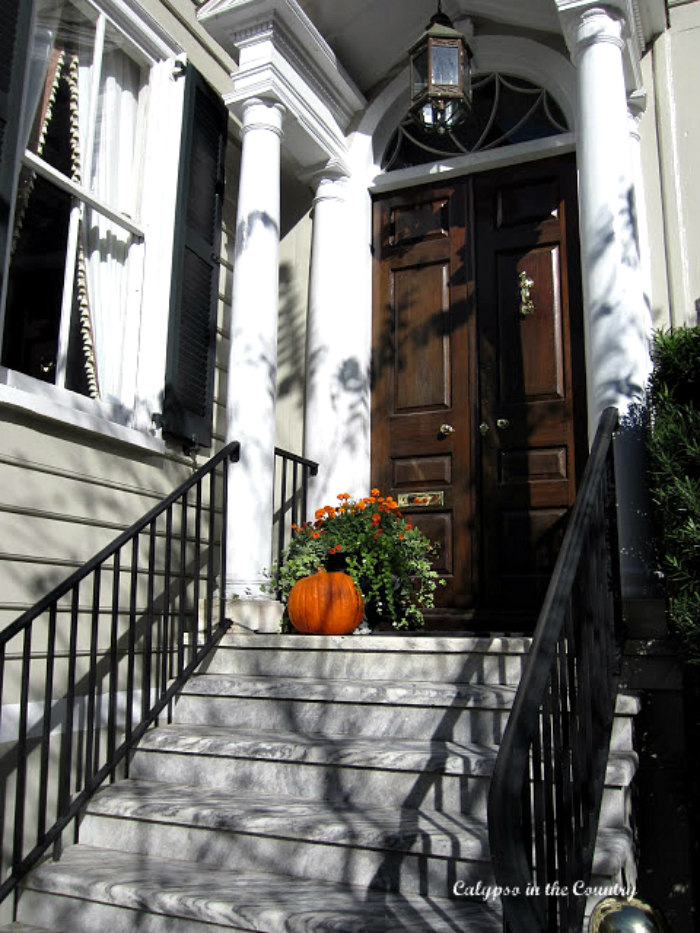 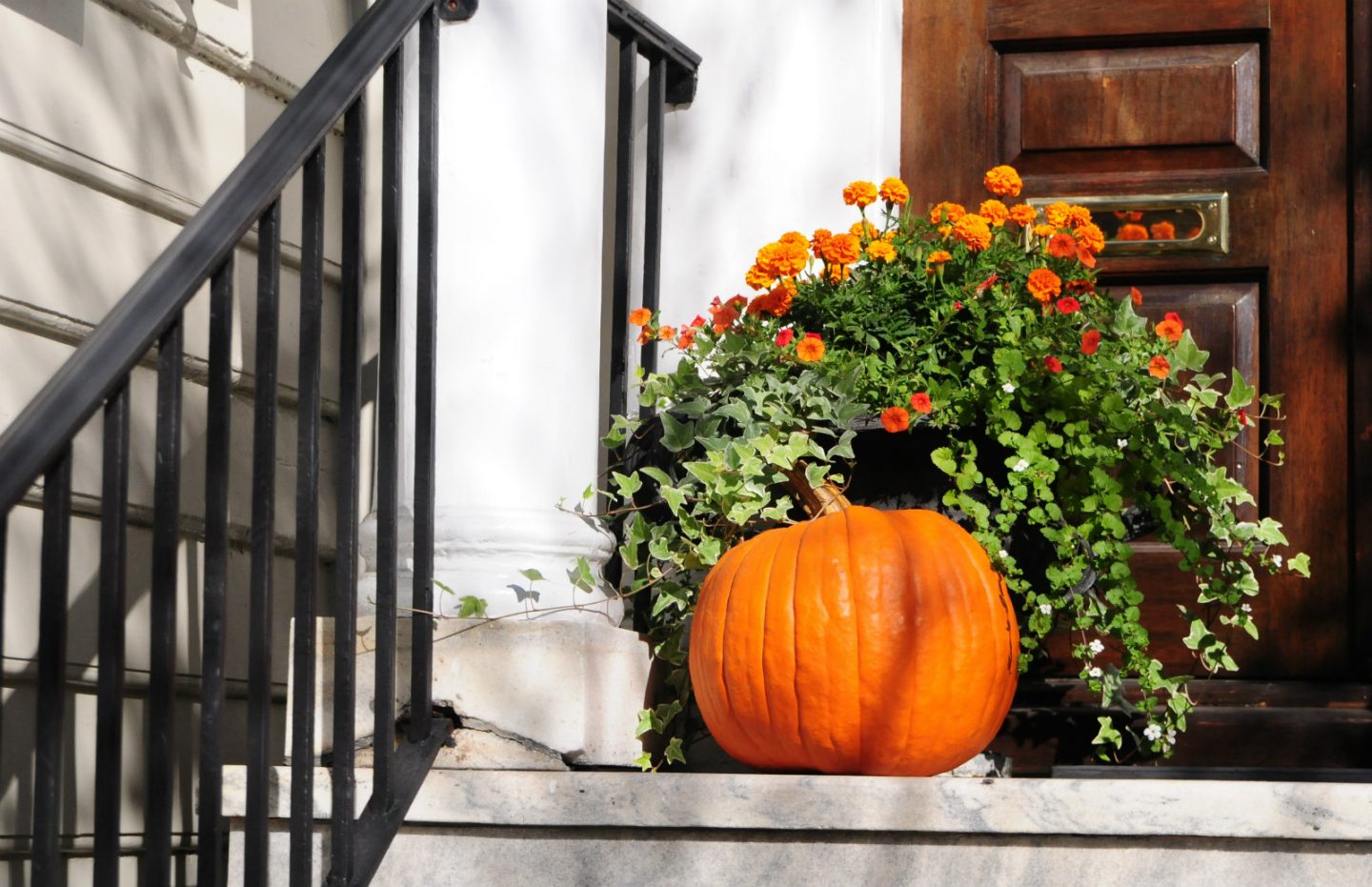 Sometimes, that splash of orange is all you really need to make a porch festive for fall or Halloween. 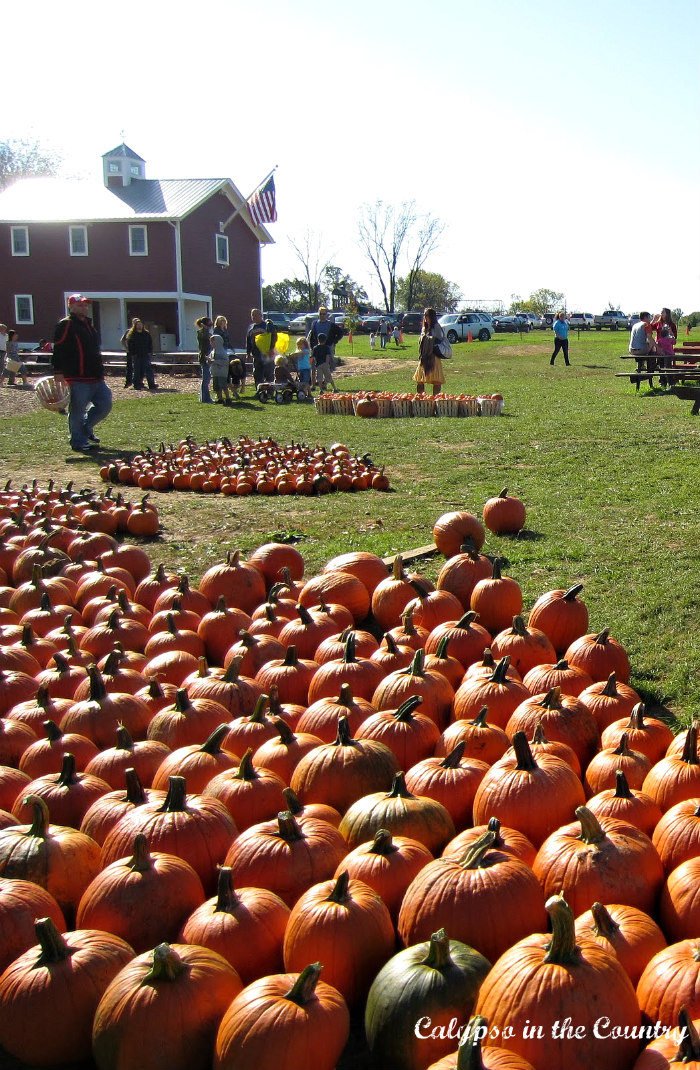 After all, orange pumpkins are what you would expect to see at a farm stand. 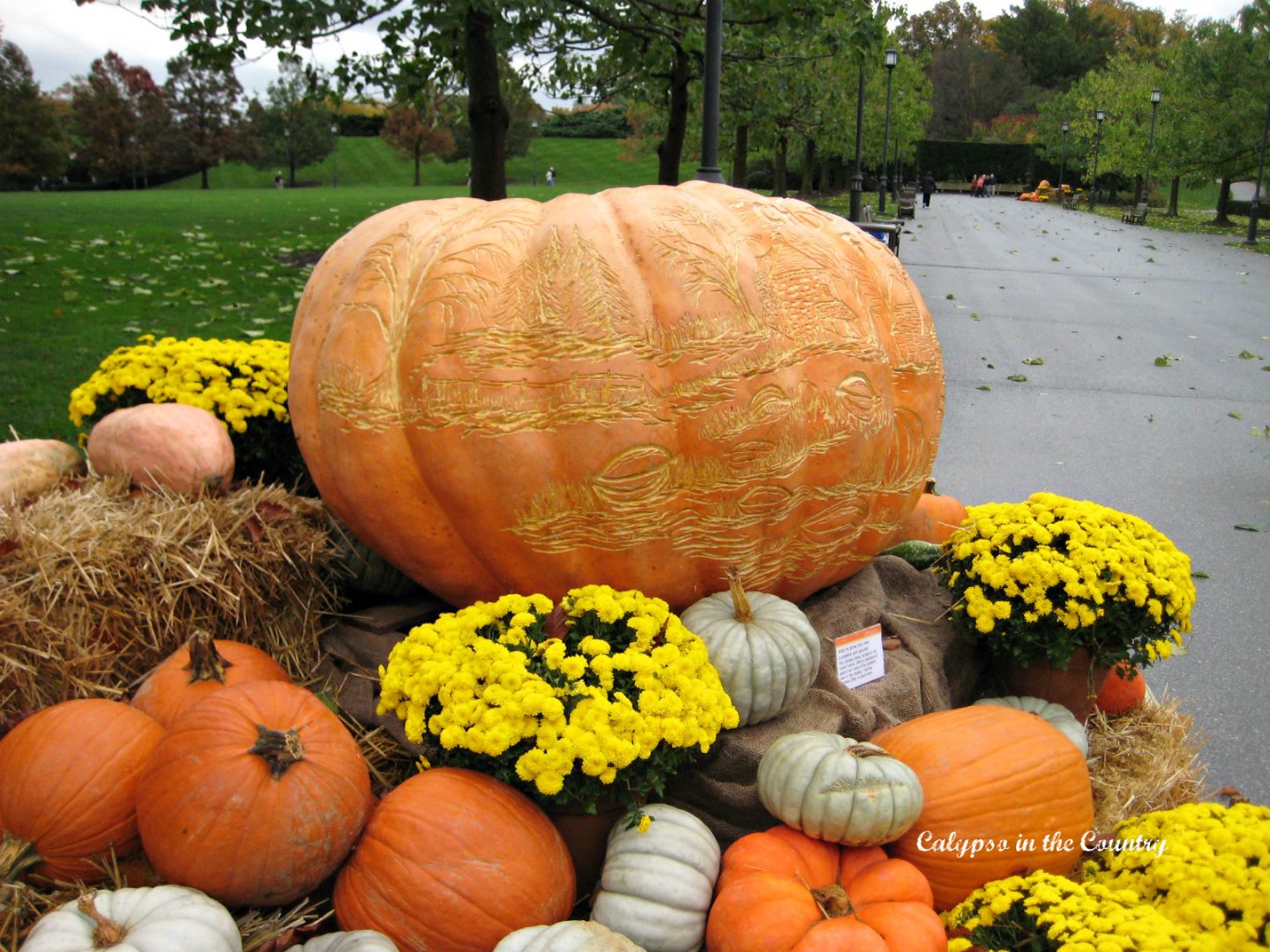 Look at the etchings…amazing, isn’t it?  This was one of the many beautiful pumpkin displays at Longwood Gardens near Philadelphia a few years back.

Although, orange pumpkins have made there way into my fall decor as well.. 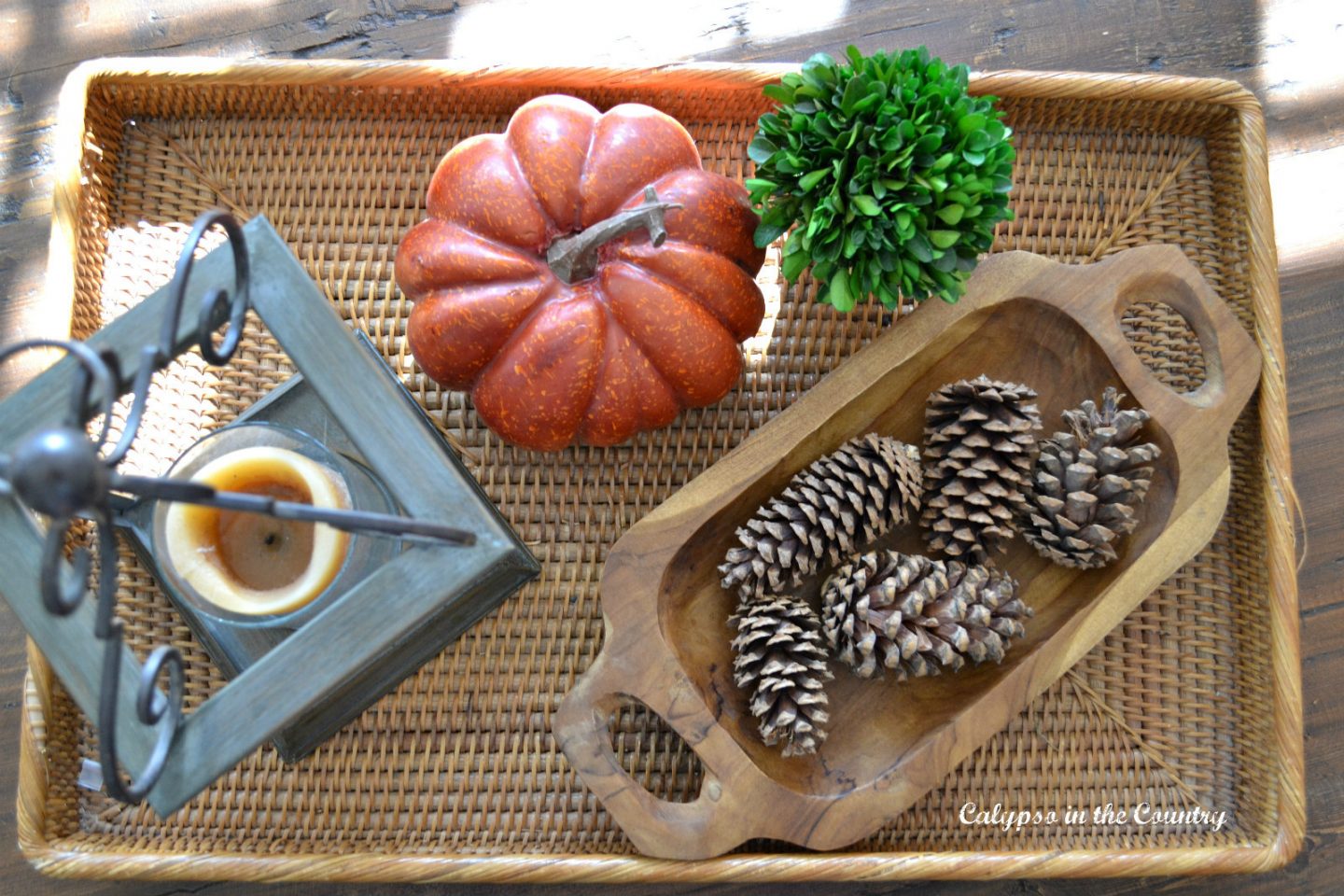 Orange brings the coziness of fall into our homes.

Using artificial pumpkins are great for indoor vignettes because you don’t have to worry about them rotting. 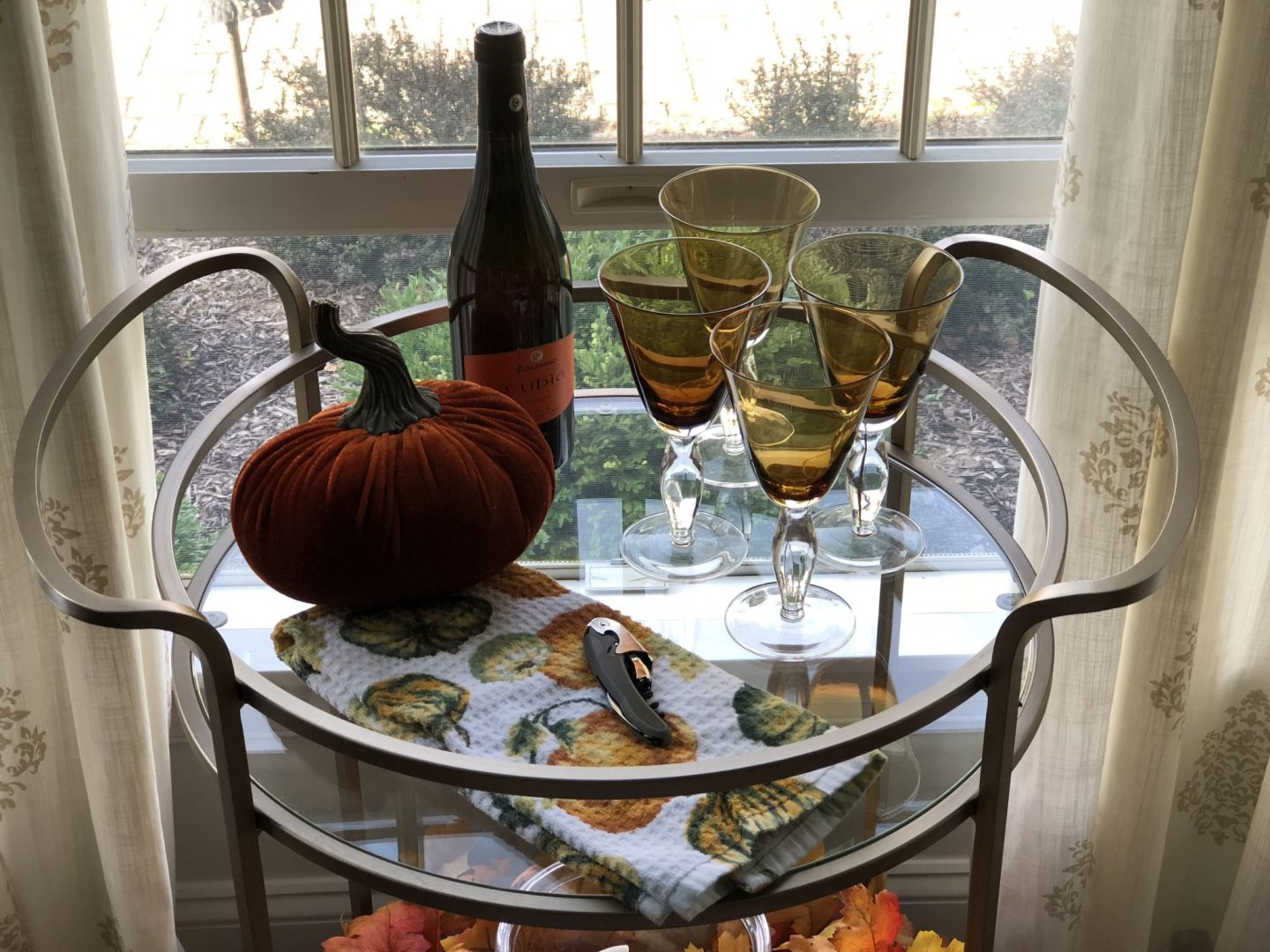 Of course, I still love the velvet ones like the one in my recent bar cart post. 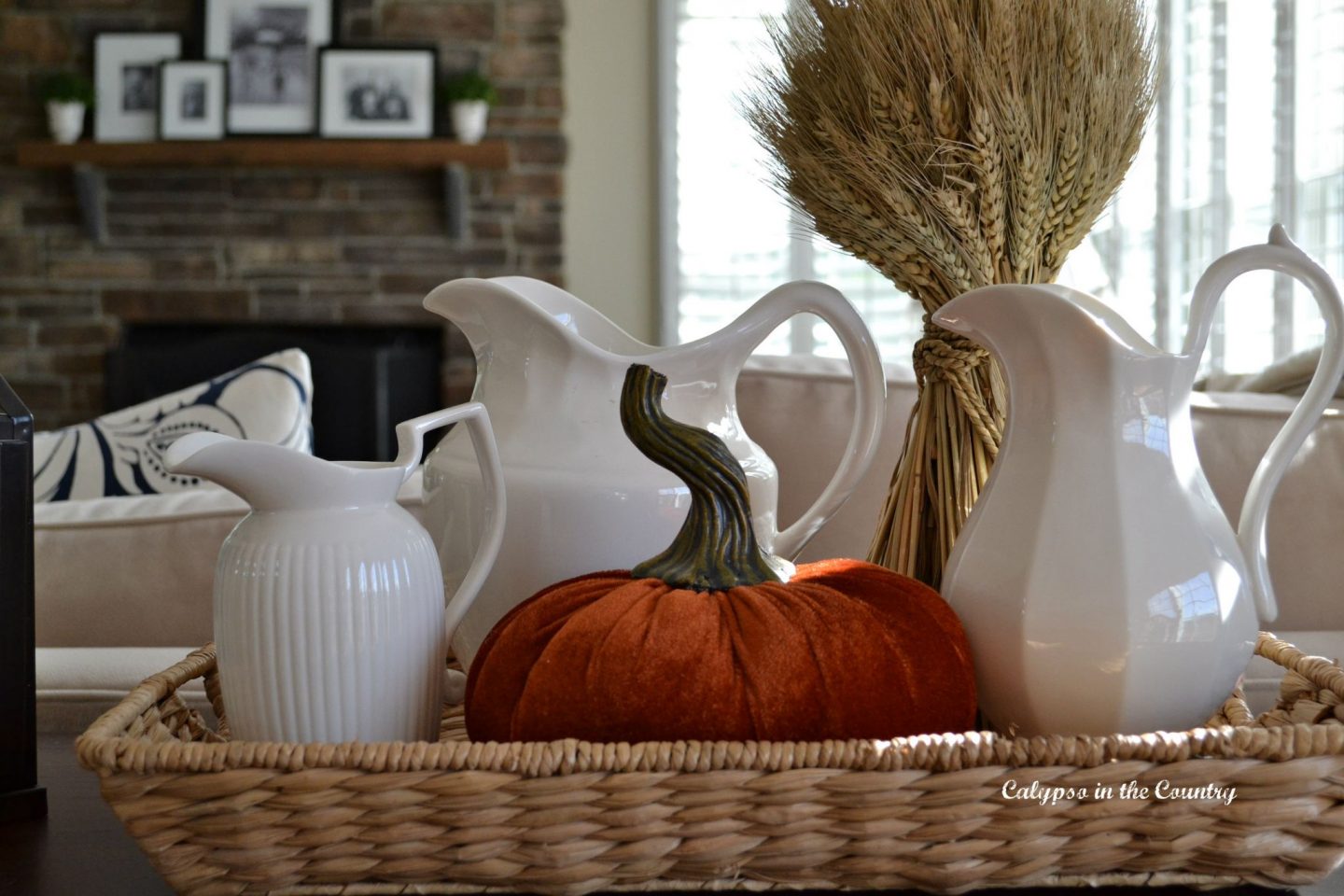 Previously, I used it in my family room console table – A Festive Fall Vignette on the Console Table. 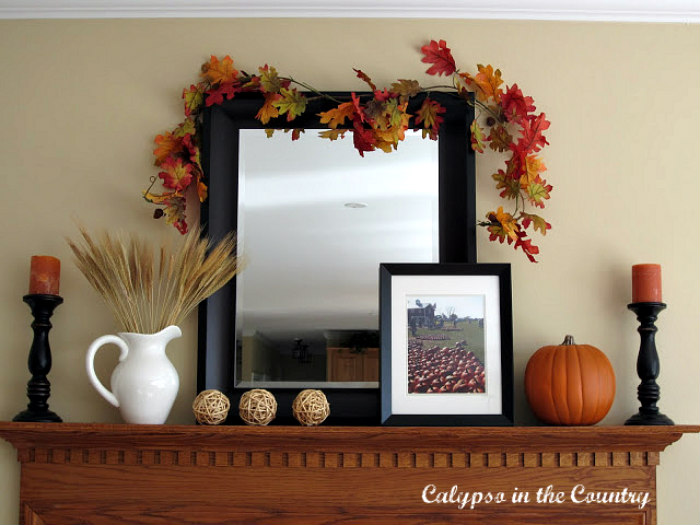 I’ve used artificial ones on my mantels as well…Fall Fireplace Mantel.

There’s no denying that orange and black are great for Halloween!

Though, I know some people don’t like to use orange in their homes but I say bring on the color!

Most people won’t hesitate to use orange outside though… 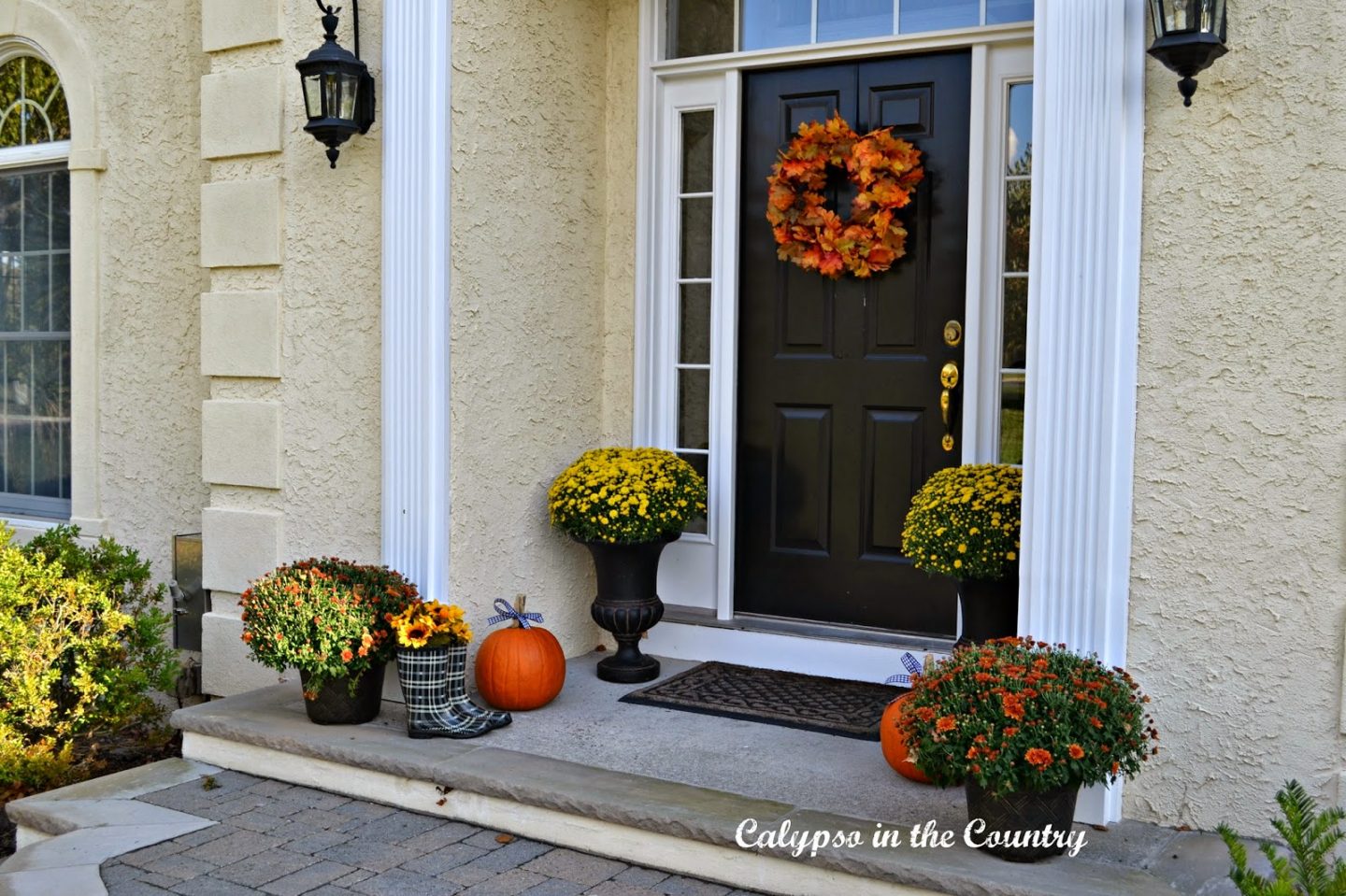 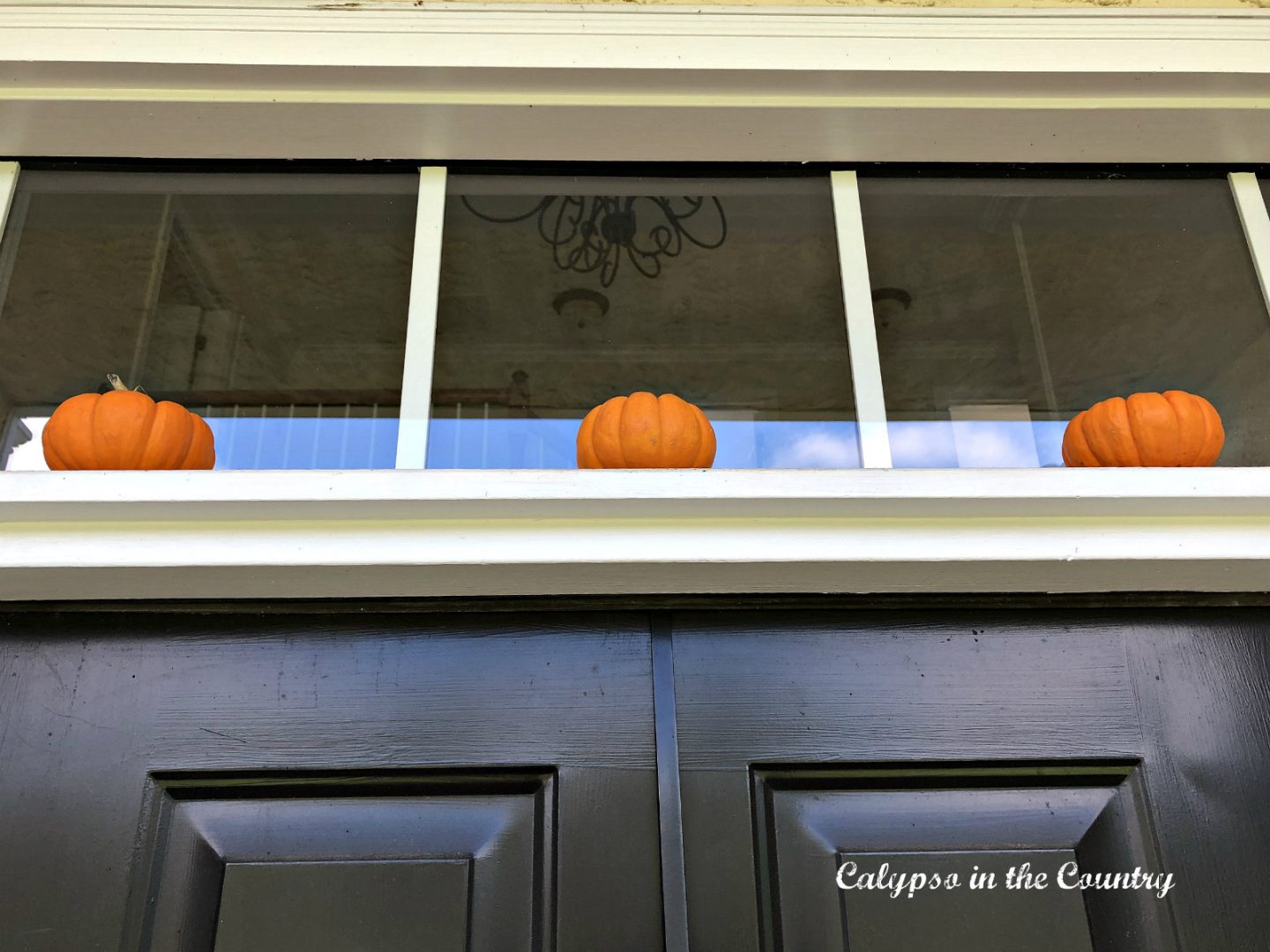 One of my favorite ways to display mini orange pumpkins is above the front door.

Only orange pumpkins would look good in this spot.  White ones would just disappear! 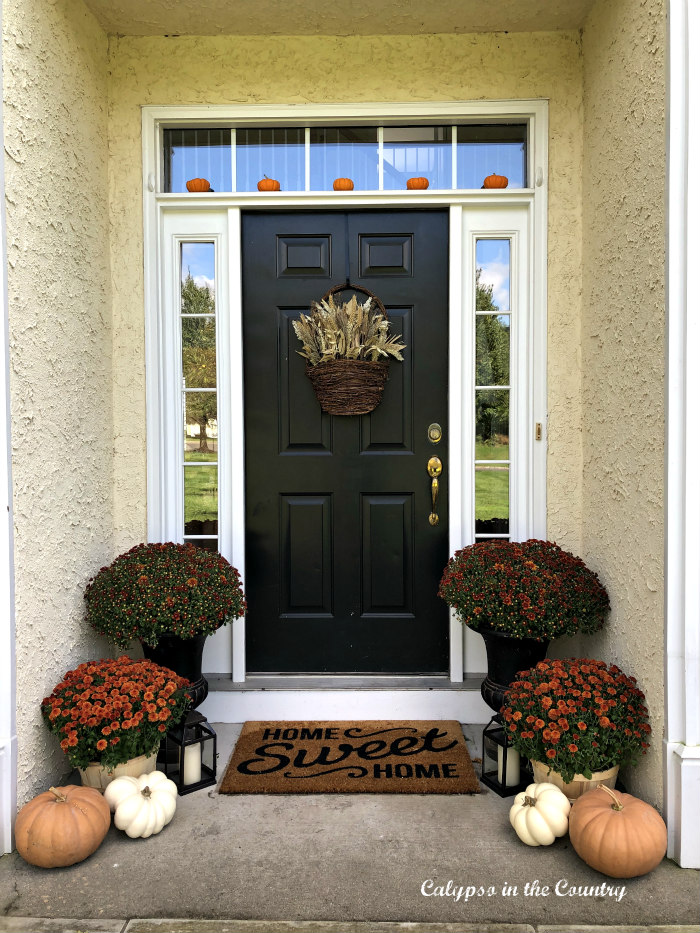 What better way to appreciate orange pumpkins then to carve them up for Halloween!… 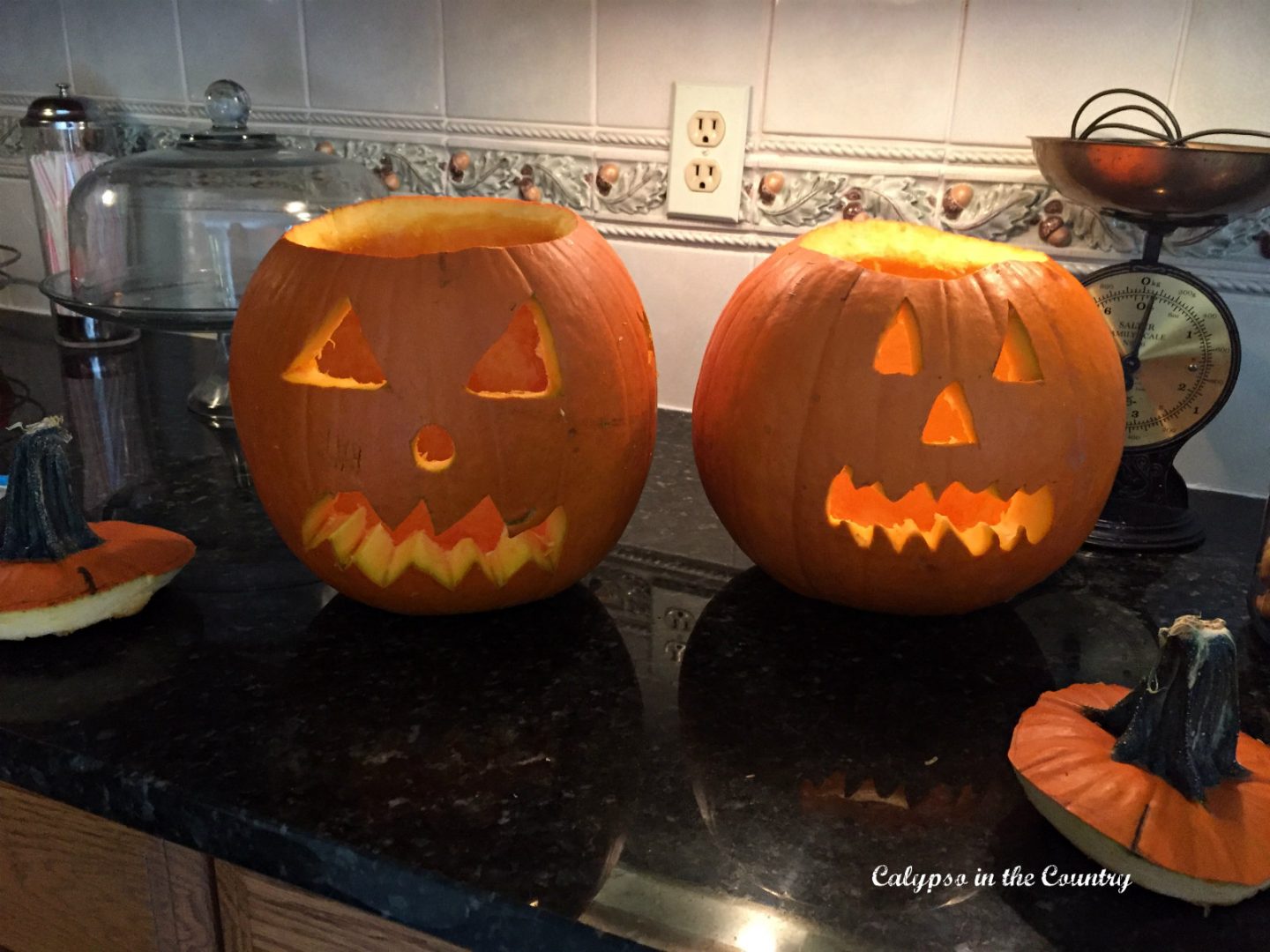 My mom invites my kids over for a pumpkin carving day each year.  That reminds me, we still need to do that this year! 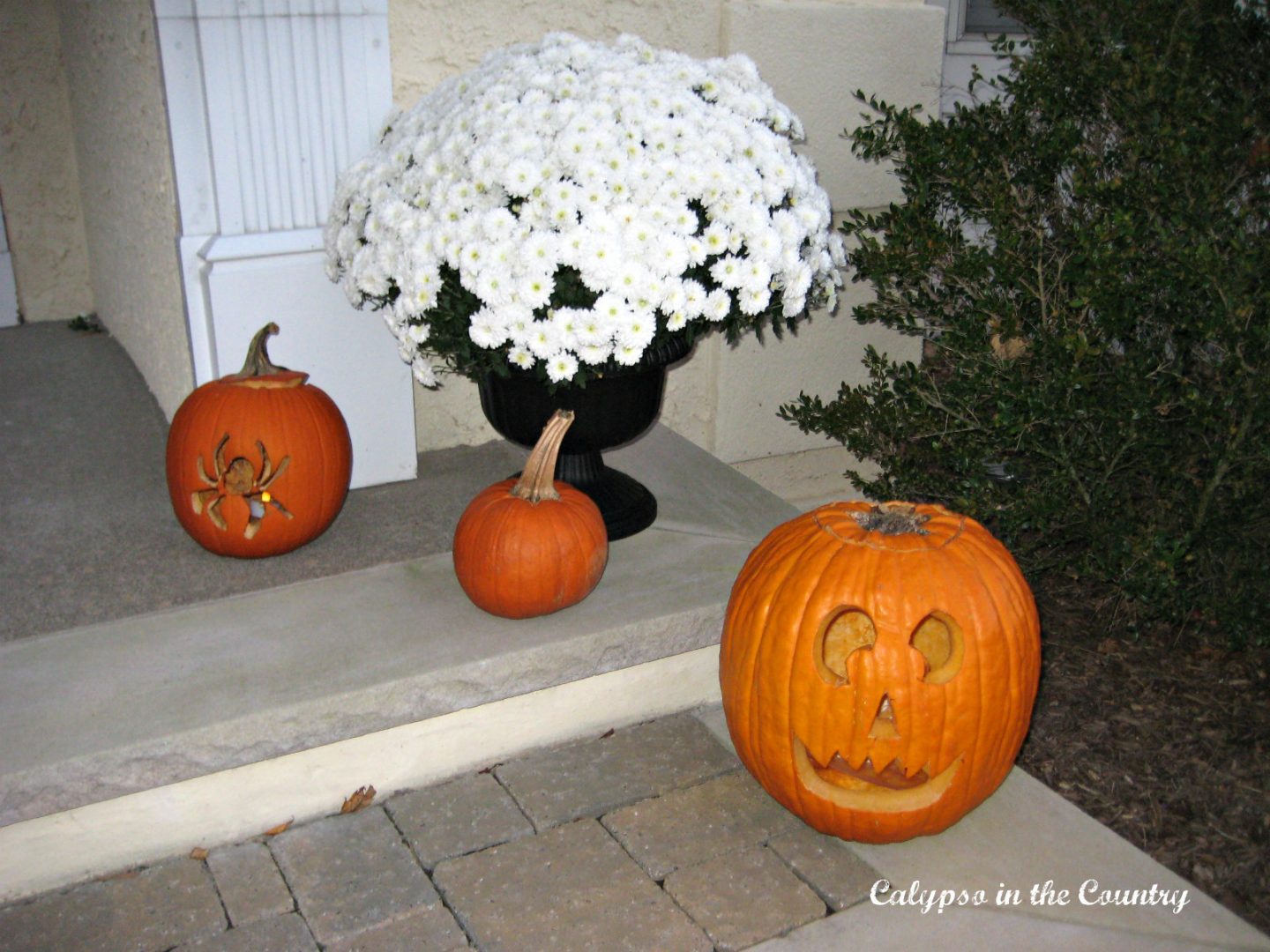 It’s always fun to display the creative carvings on our porch and give those orange pumpkins the recognition they deserve!

Of course, we have to be careful with our pumpkins out here in the country… 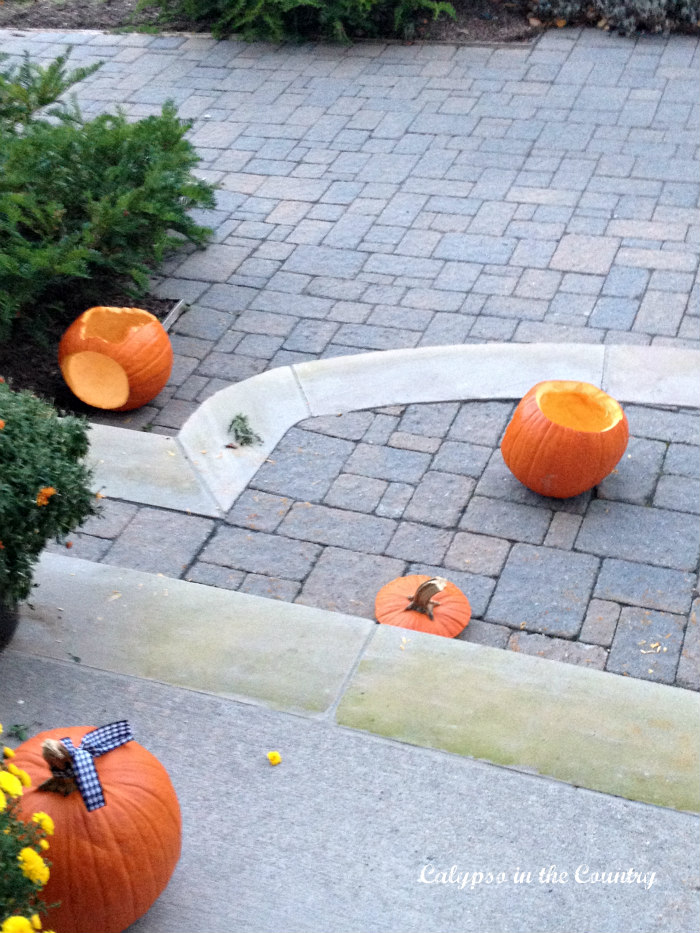 Luckily, we have a “great watchdog” on patrol… 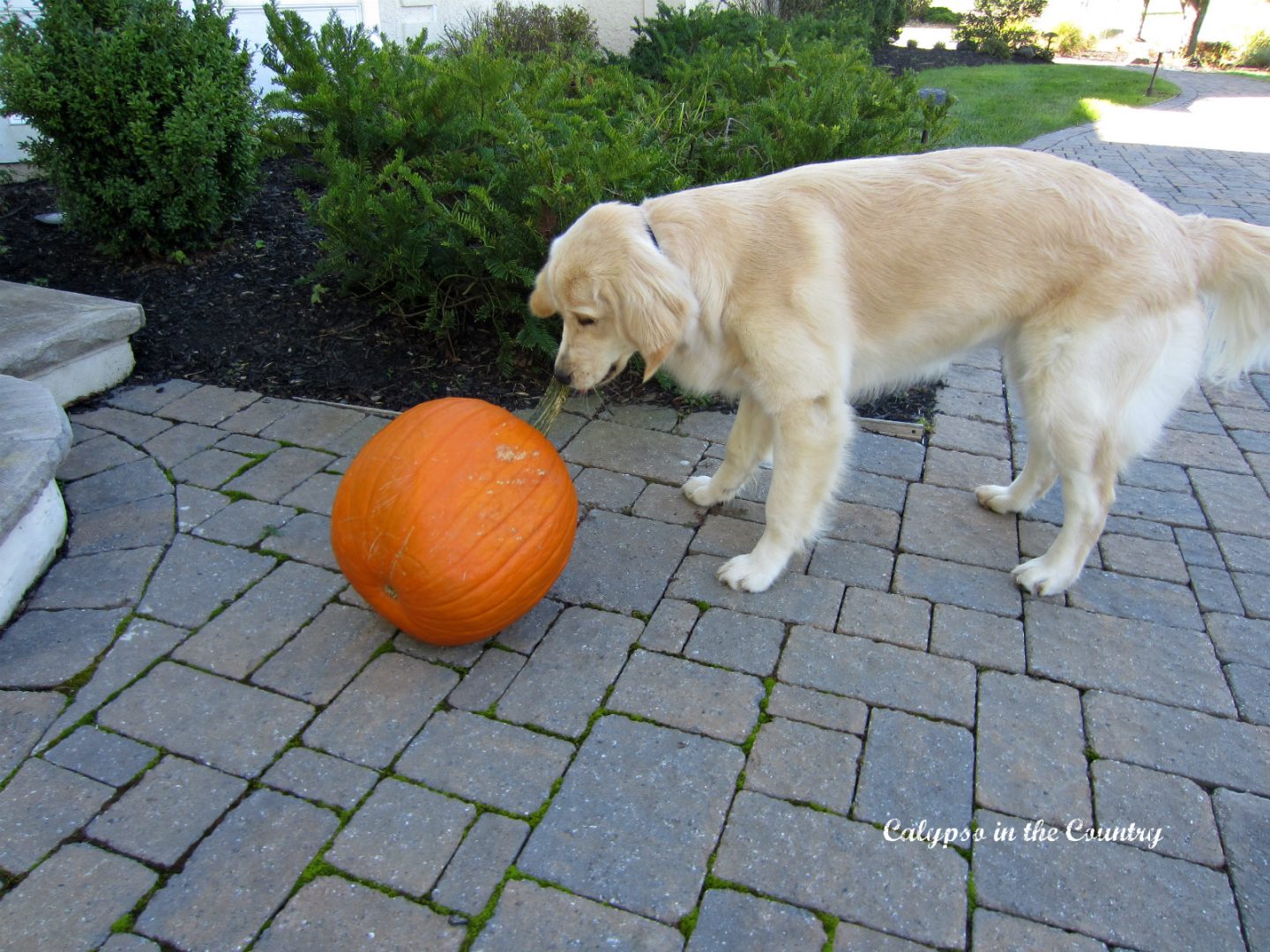 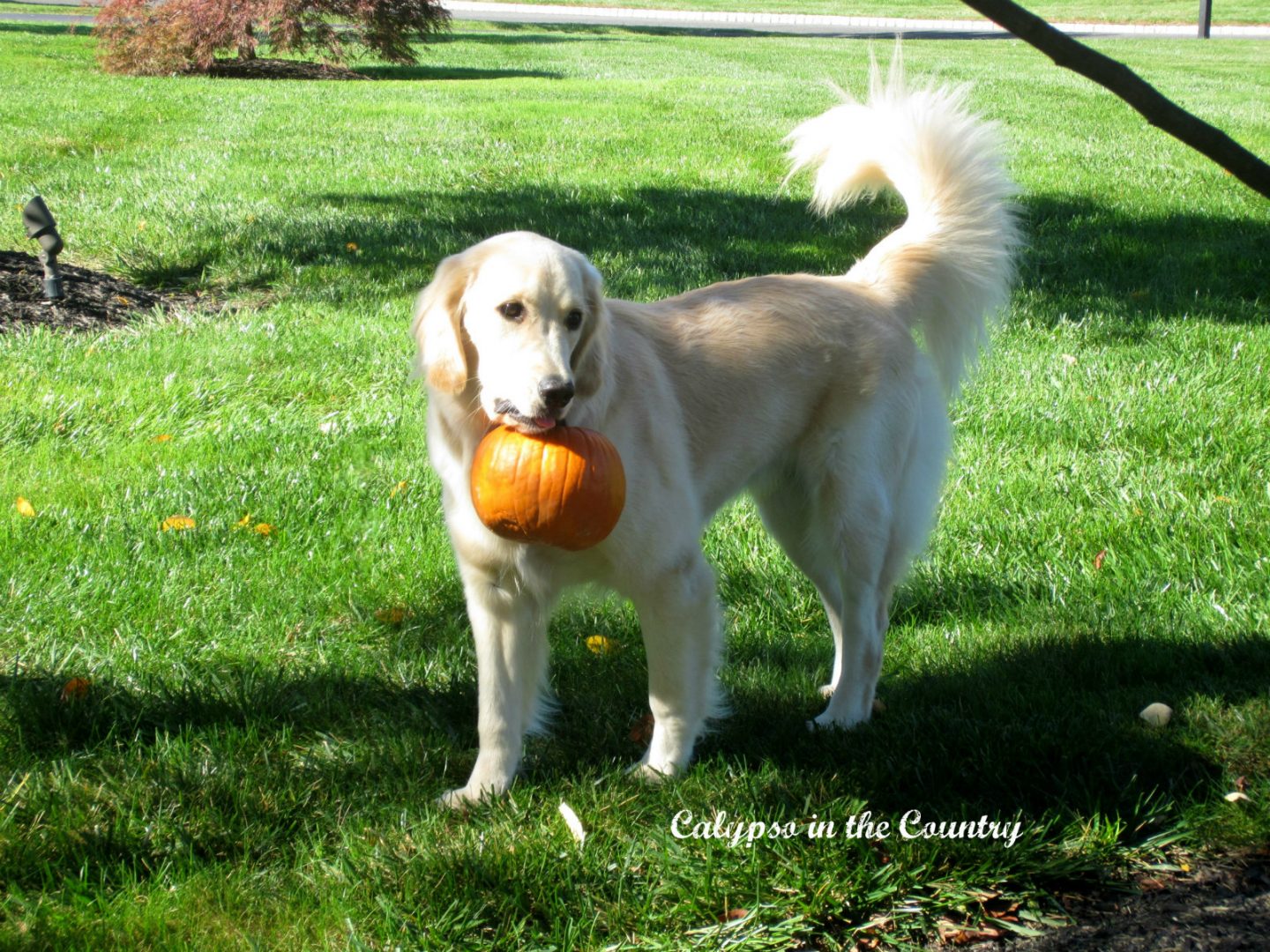 She has been known to carry them around.  Recently, she has also been known to eat one of the mini pumpkins…ugh, that’s a whole other story….

As much as she loves the orange pumpkins, she wasn’t thrilled when we dressed her up as a pumpkin for Halloween!  Go figure… 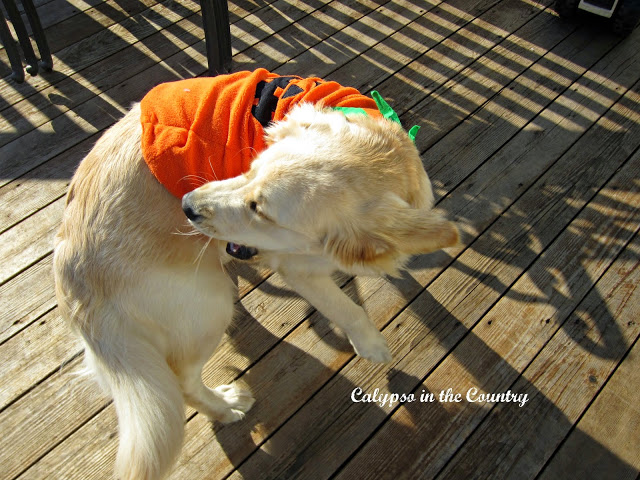 For even more ideas, including orange pumpkins and white pumpkins, read – How to Decorate with Pumpkins for Fall.

Have you bought any orange pumpkins this year?

We had our beadboard ceiling installed in the laundry room on Saturday…and I couldn’t be happier! Well, I could be happier if I didn’t have to strain my neck painting it tomorrow.   Either way, I am thrilled with how it turned out! At one point, I was on the fence about which way to run… 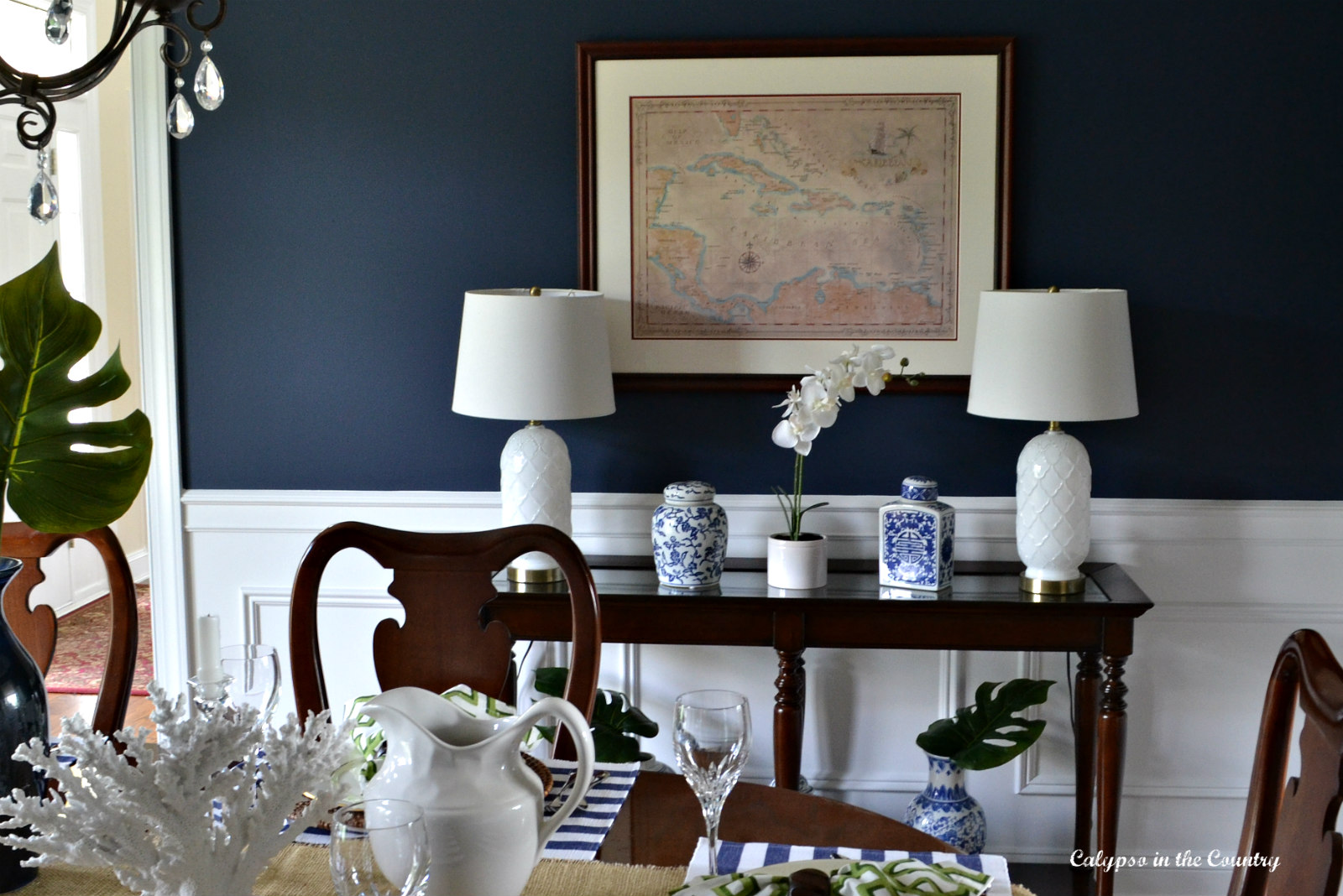 Thankfully, I survived the 6 weeks and finished my navy blue dining room! Yes, It’s reveal day for the guest participants of the Spring One Room Challenge!  I must say, there’s nothing like a deadline to get me moving… Navy Dining Room Reveal: In case you are not familiar with the One Room Challenge, it is…

While many of you are giving beautiful house tours of your completely decorated homes, I am still deciding where I am going to put things! I have always wanted two small trees for my front porch and I scored these 3 1/2 foot ones on Home Depot’s website on Black Friday.  They were regularly $69.98… 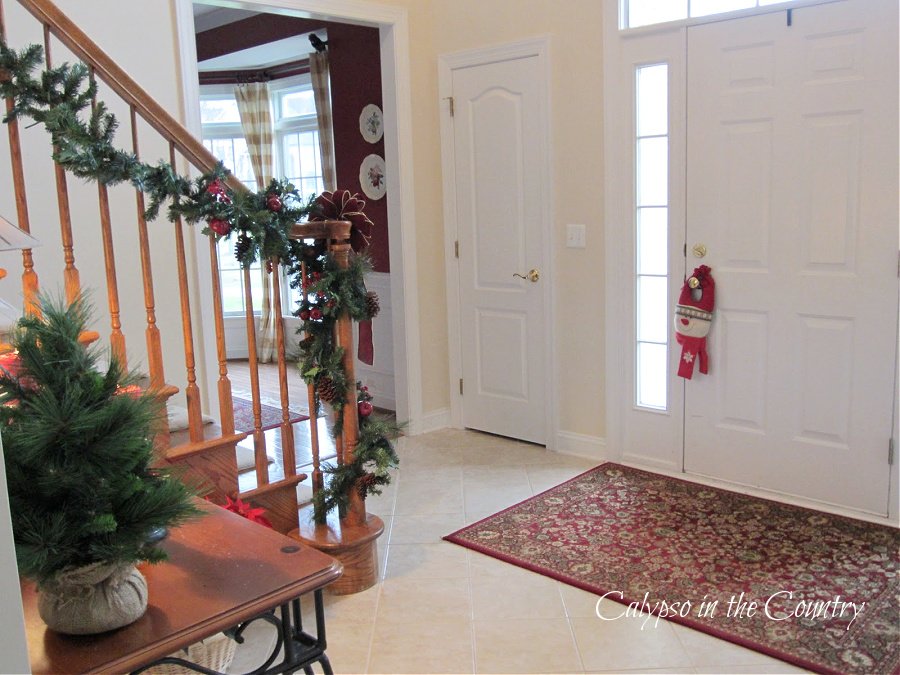 Having an open staircase makes it fun when it comes time to hang the Christmas garlands. Since, this is the first place guests see, I feel like this is one of the most important areas of the house to decorate. Of course, most of my close friends and family arrive through the garage when they…

Today let’s take a look at my living room windows and some window treatment ideas… Maybe some of you might be wondering how I can have such open windows with no privacy in my living room. Well, I really do enjoy the view of my front yard. And I really do have some privacy. In…

After my recent obsessing over paint colors for my foyer, I ended up choosing Benjamin Moore White Sand…. Even though it would have been fun to try a totally different look from what we had before, I went with a very similar paint color. In fact, we previously painted our foyer Bone White so there really…