A few months ago, I was so excited to show you my new kitchen that I forgot to do a follow up post showing you the before and after from every angle.

Let’s take a before and after tour of my kitchen…

This is what my kitchen used to look like when you entered the room. 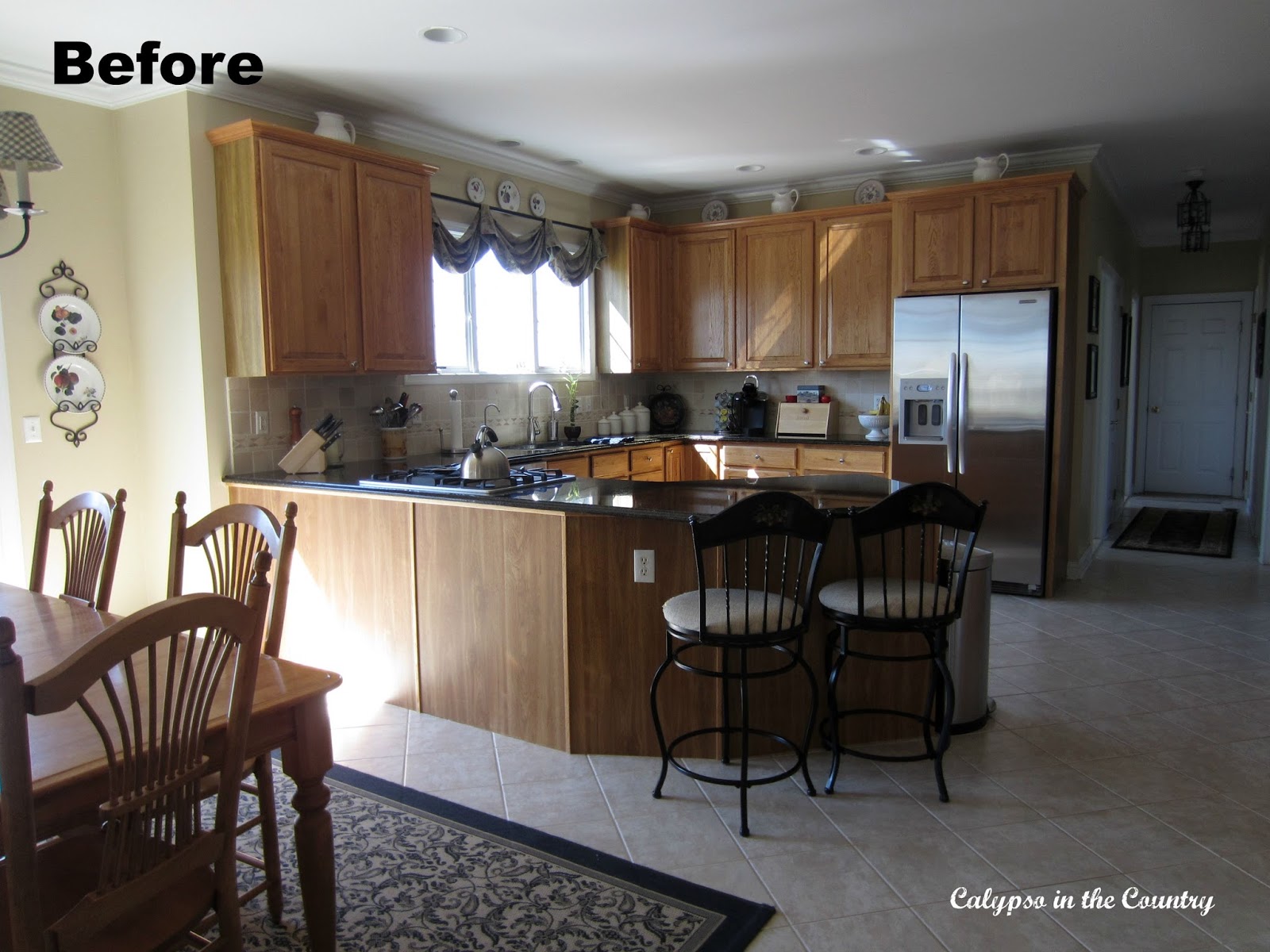 Basically we gutted the room from top to bottom.  What a project!  (And when I say ‘we’, I mean the contractor and his crew.  This was no way a DIY project!) 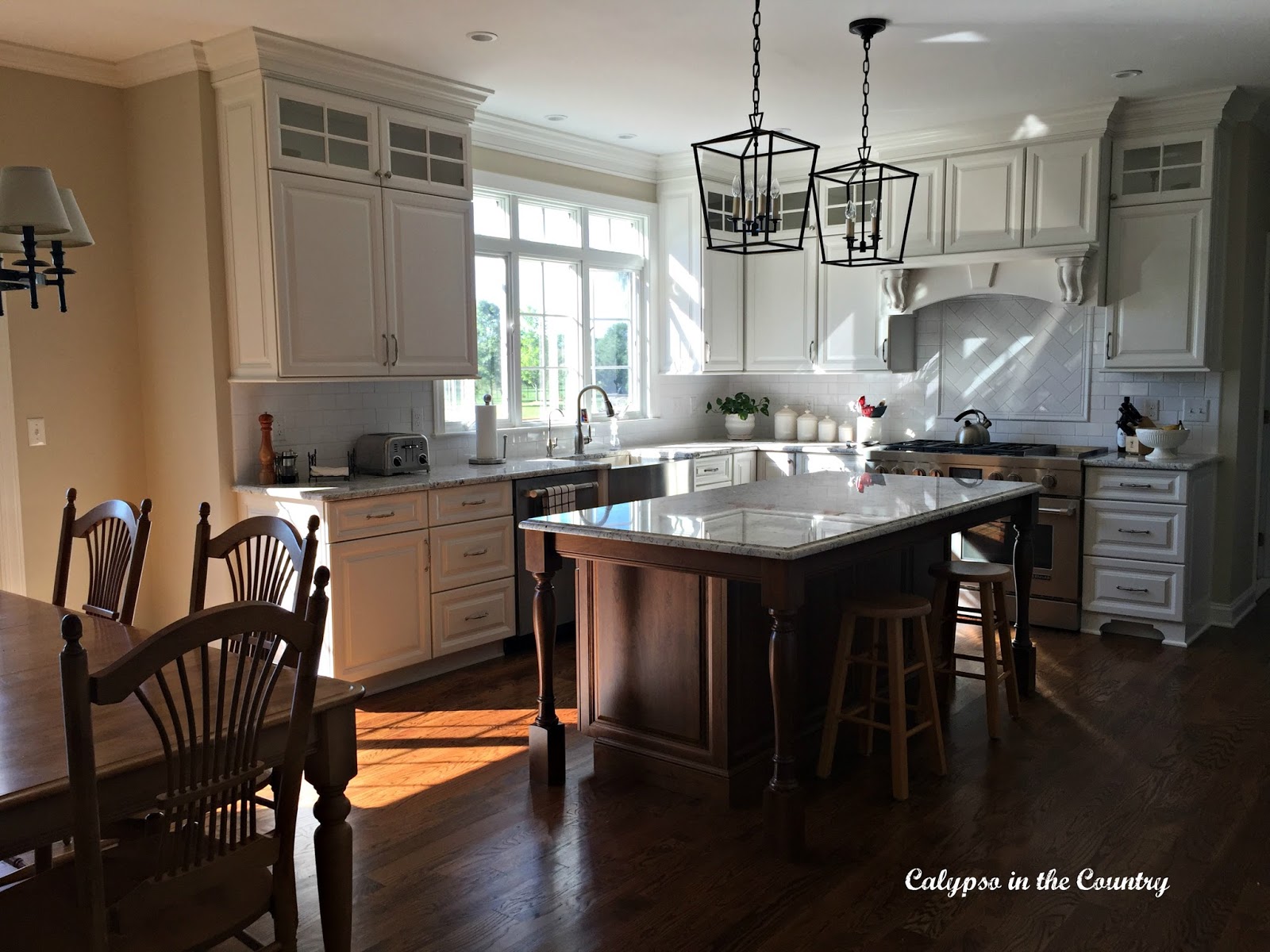 I had always wanted a white kitchen and was thrilled with the results!  I still have to buy new bar stools and eventually a new table and chairs, but basically we are finished!

Here is the view from the kitchen table.  As you can see we changed and added lighting as well… 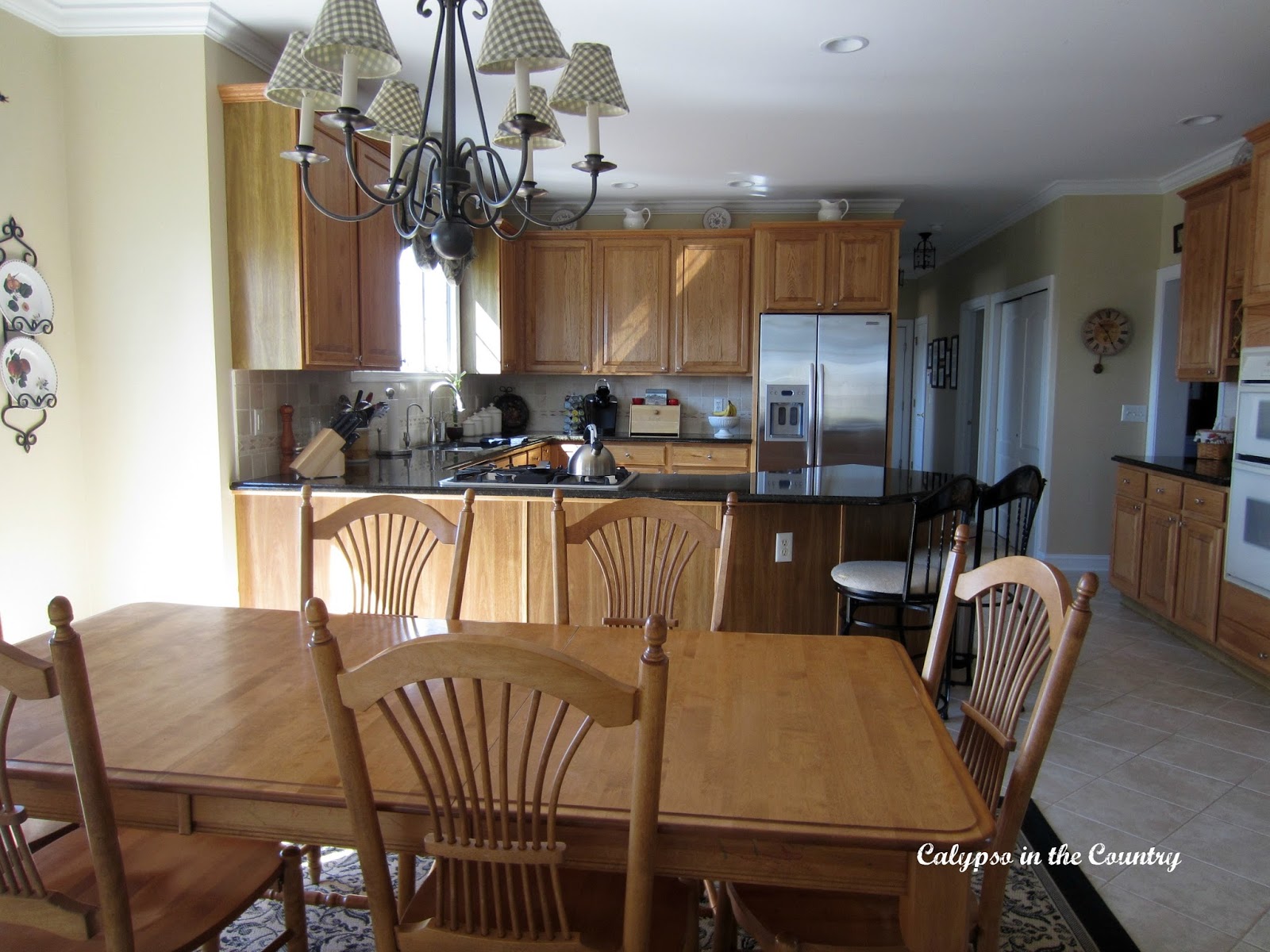 The refrigerator used to be on the far wall and the peninsula divided the room.  The stove top was on the peninsula.  Those things have changed! 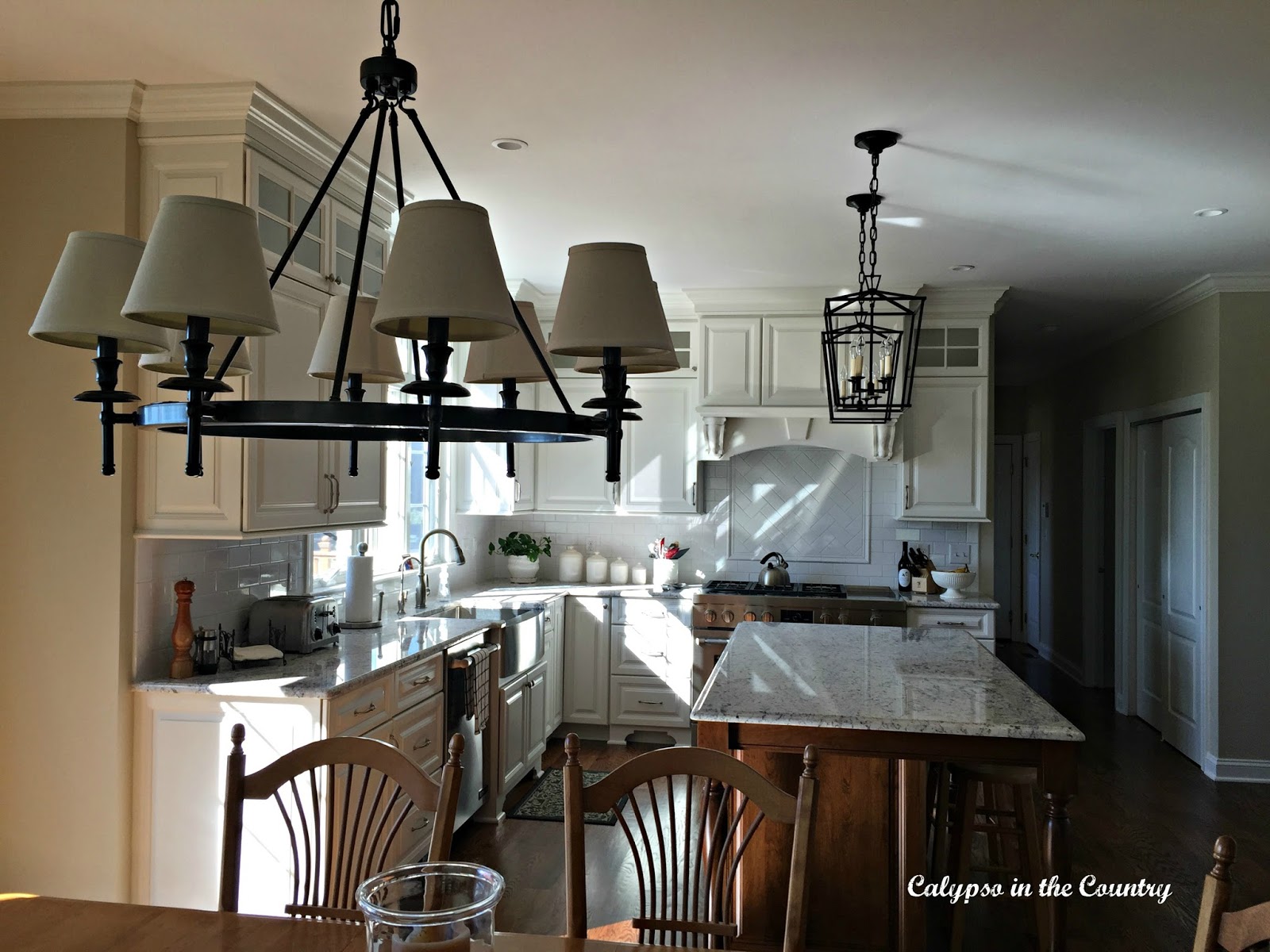 One of the best things we did was remove that peninsula and put in an island!  It’s so much easier to move around in here now!  The refrigerator is no longer on the far wall.  Now that’s where the new stove sits!

The one thing that annoyed me from the day we moved into our house 16 (almost 17) years ago was the size and placement of the kitchen window!  Changing the window was one of my top priorities!  This view is looking in from the dining room… 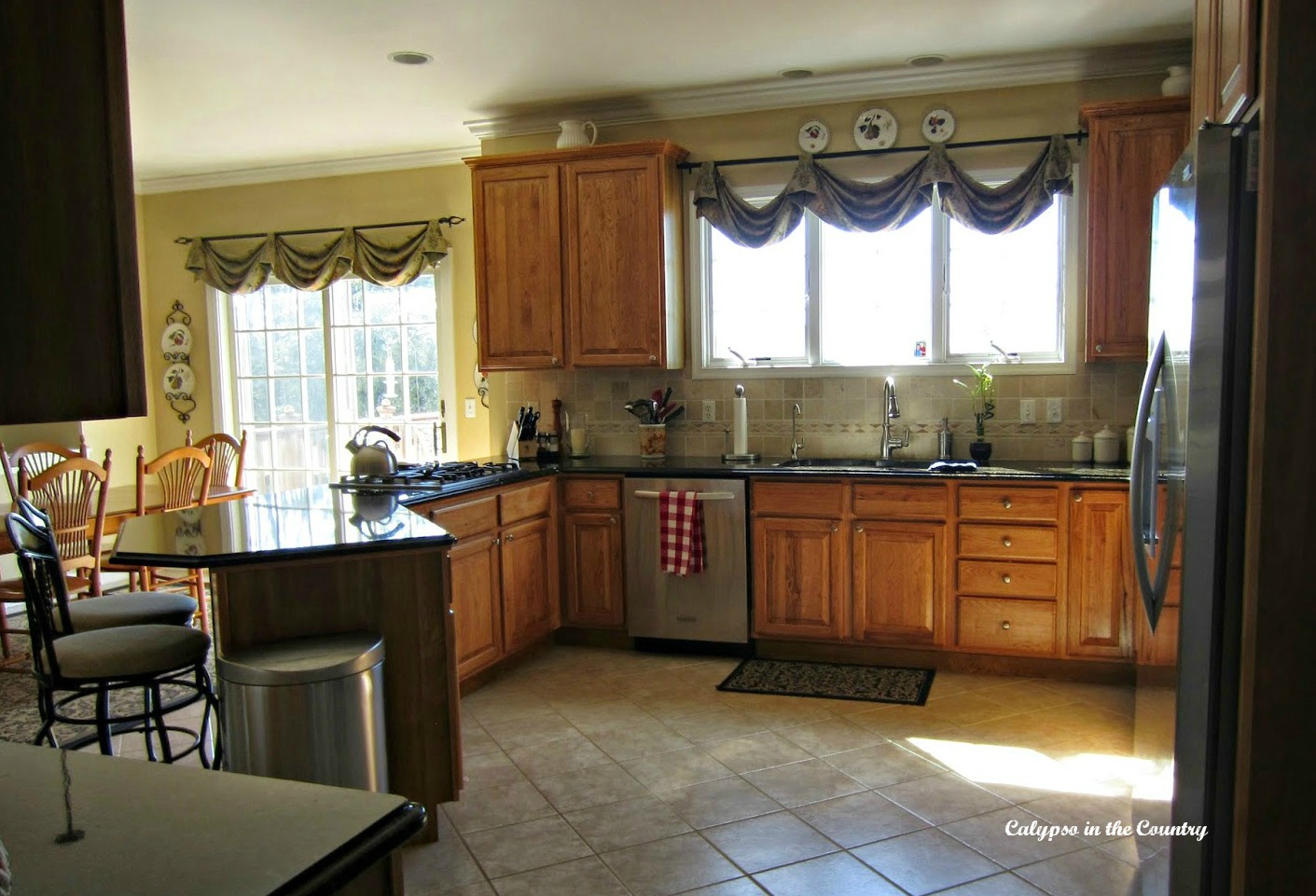 The windows were just too high.  I would have to stand on my toes to really get a good view out the window!  And I always hated having that garbage can as such a focal point! 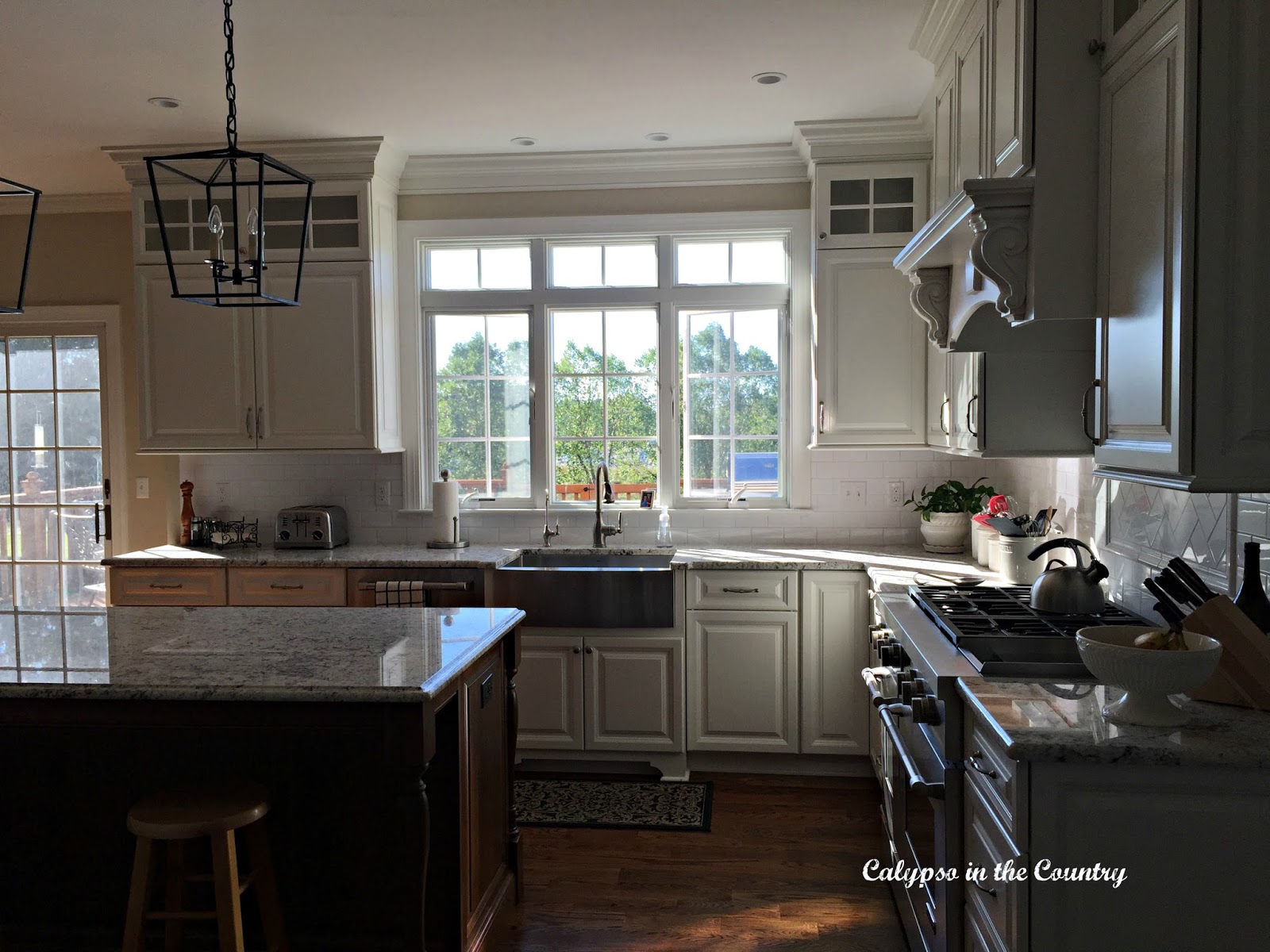 I am in love with my new windows!  They ended up being even bigger than I originally ordered due to a fortunate mistake!  Now they are the right height from the sink and they let in a ton of light!  And the garbage can is no longer a focal point.  I have two cabinet trash cans now!  One is below a drawer in the island and the other just to the right of the sink.  That one is my favorite because it is right below counter height which makes it easy to empty garbage right in as I am clearing plates at the sink.  It also has a recycling bin behind the trash can.

And here is a better view of the island – no more peninsula! 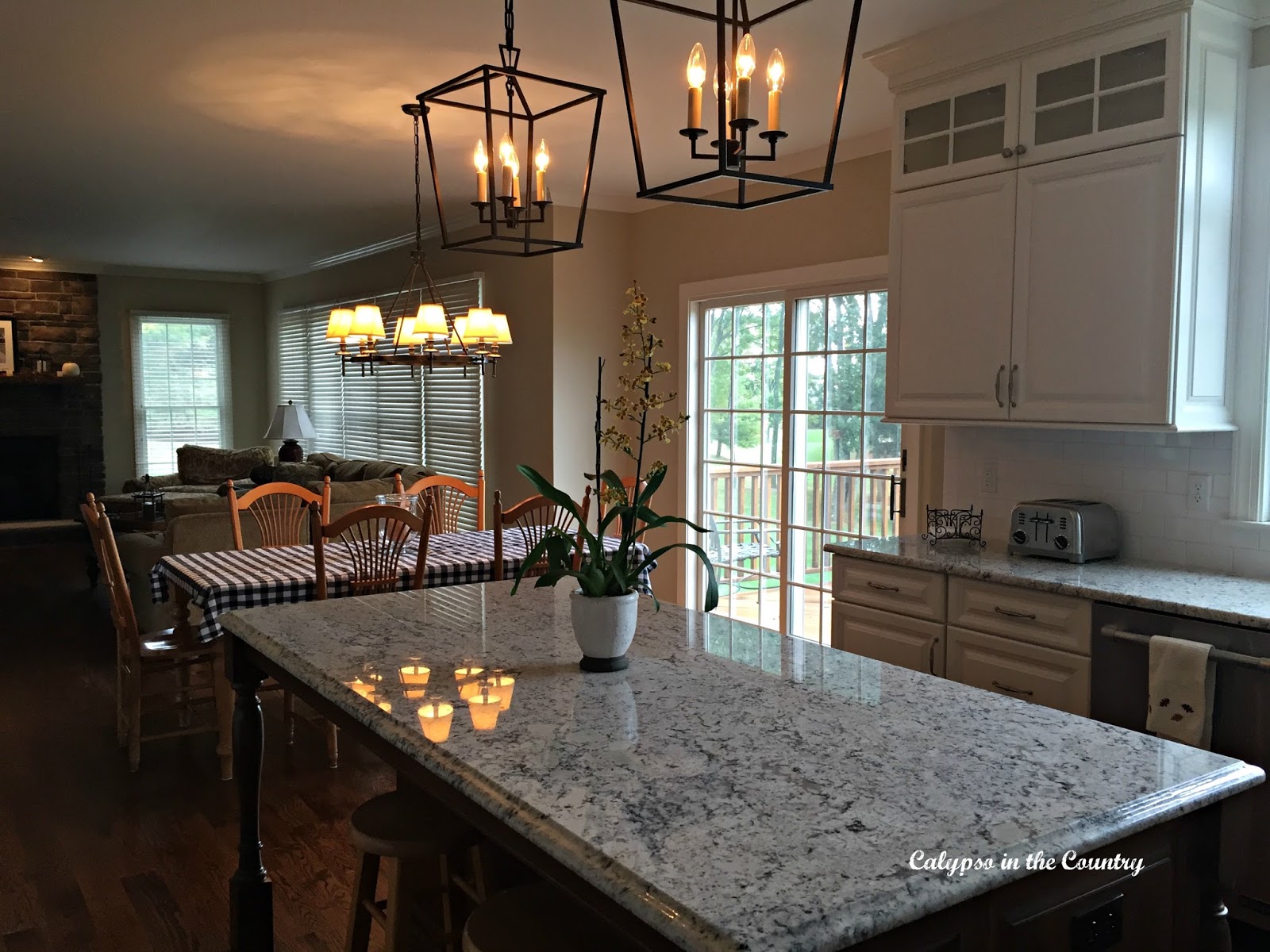 I can’t believe how much the traffic flow has improved!

As we swing over to the other side, you can see where the wall oven and microwave used to be. 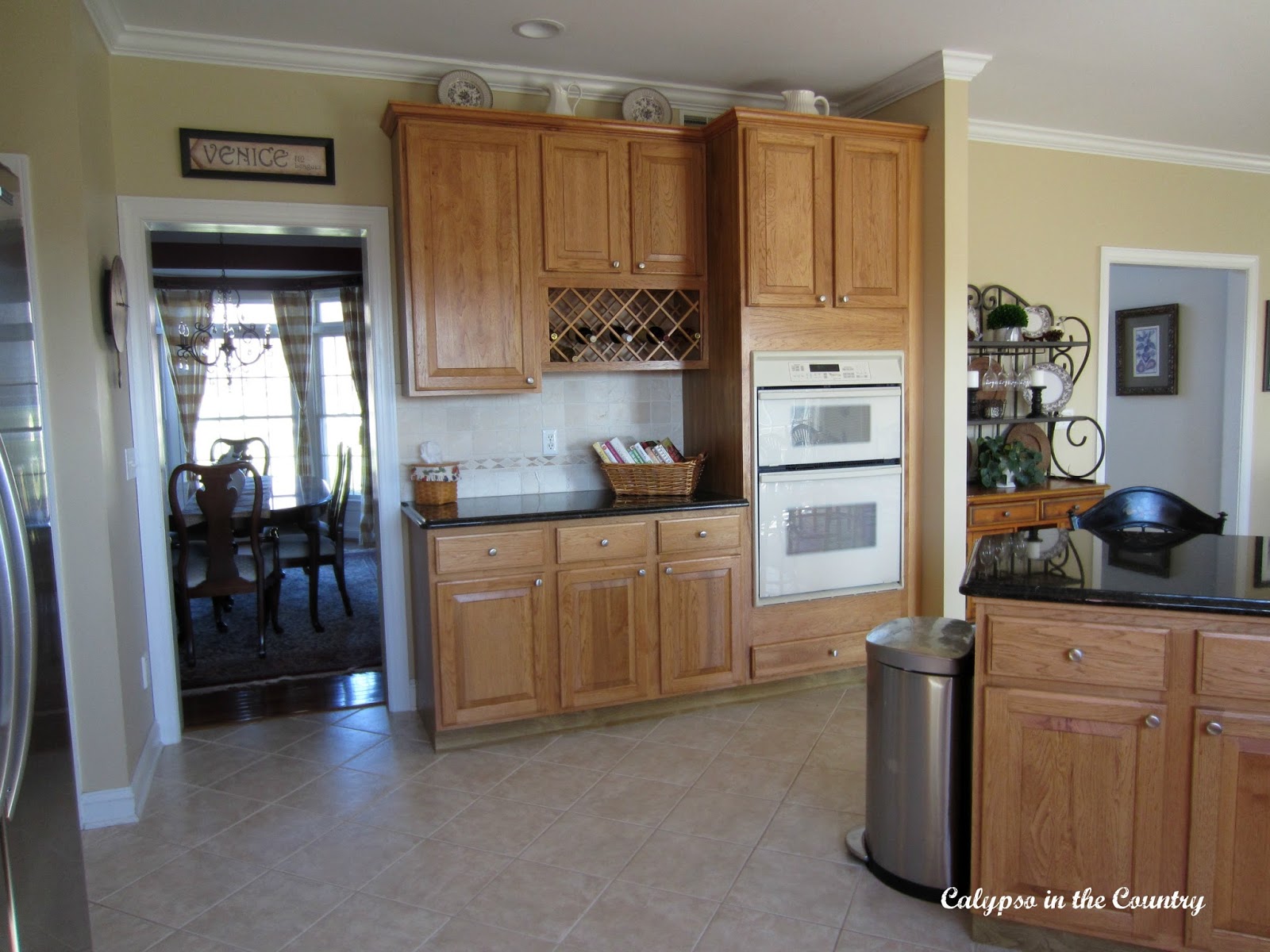 That wall to the right of the ovens wasn’t load bearing and divided the kitchen too much.  Although I miss having my baker’s rack in here, I am much happier with the new use of space! 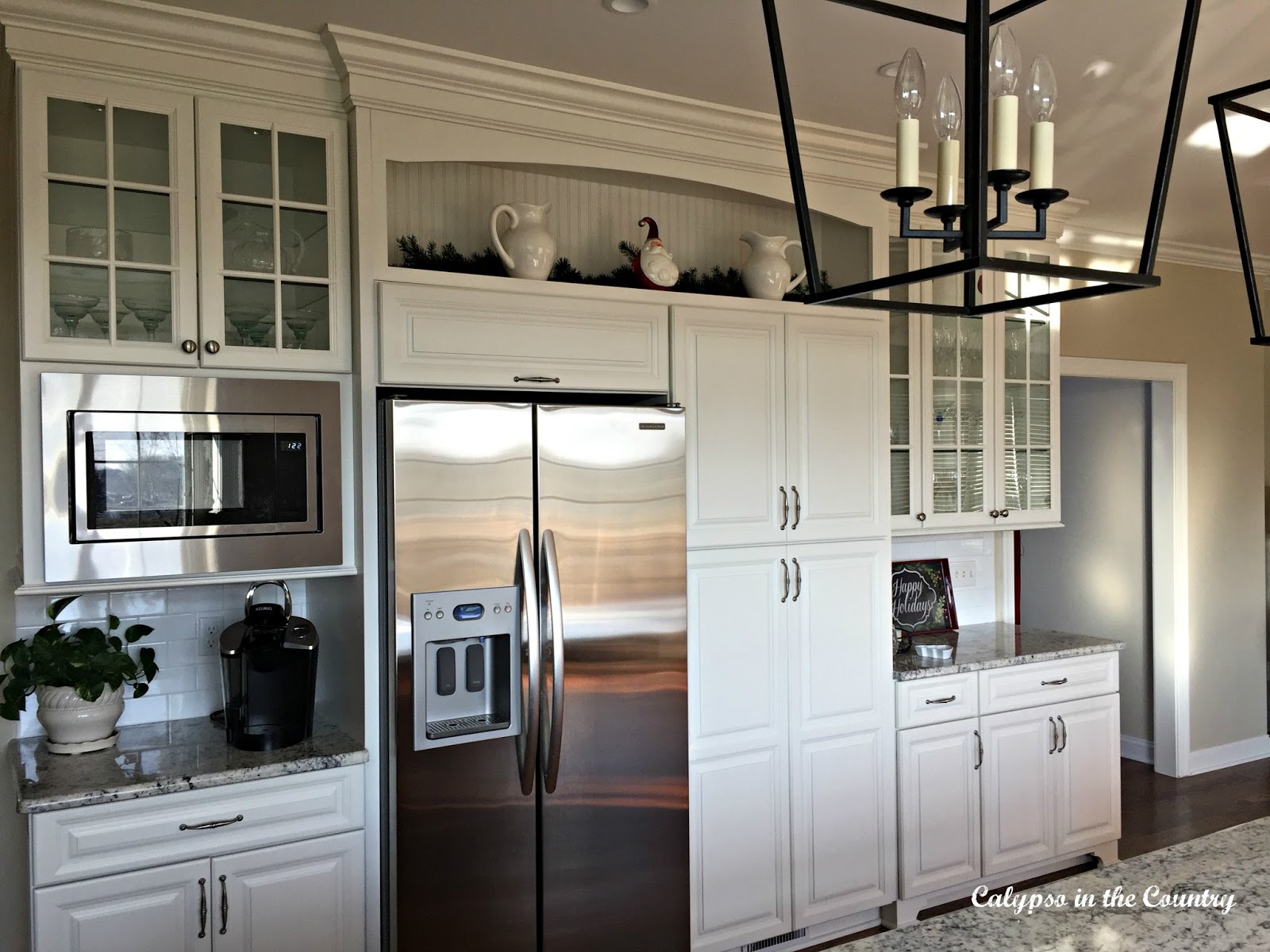 I was so worried about disrupting the ‘work triangle’ by putting the fridge on this wall but it hasn’t bothered me one bit!  In fact, now it’s easier to grab something from the fridge when you are already sitting at the kitchen table!  We also made sure we left enough space between the fridge and the island so people can walk through.

Here is another shot of the same wall (minus the Christmas decorations!) 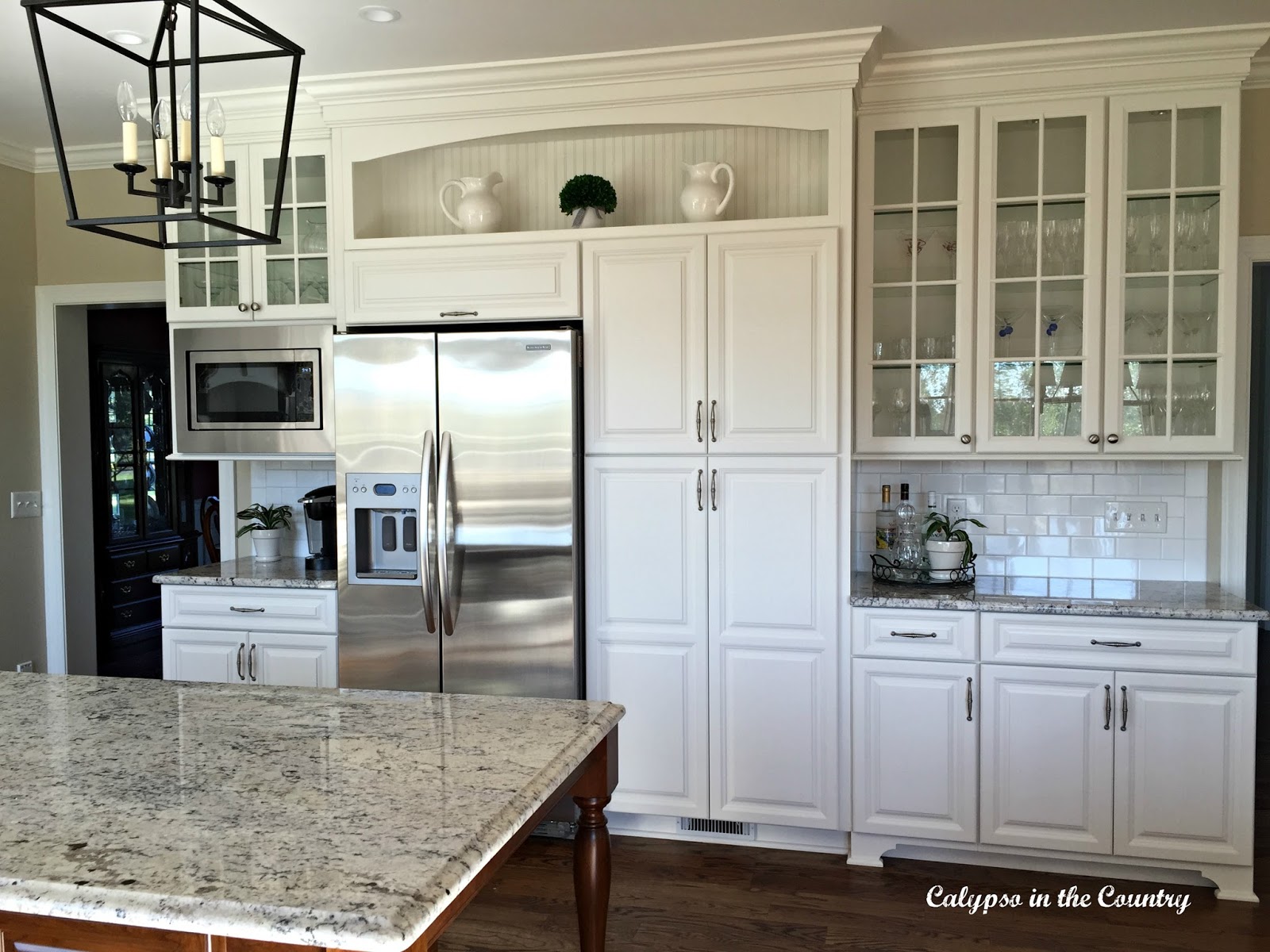 The tall cabinets next to the fridge have slide out drawers.  We already have a pantry so this is additional space for pantry items.  I am still working on rearranging that stuff to make it more efficient.

Here is another view of the kitchen if you were walking in from the back door. 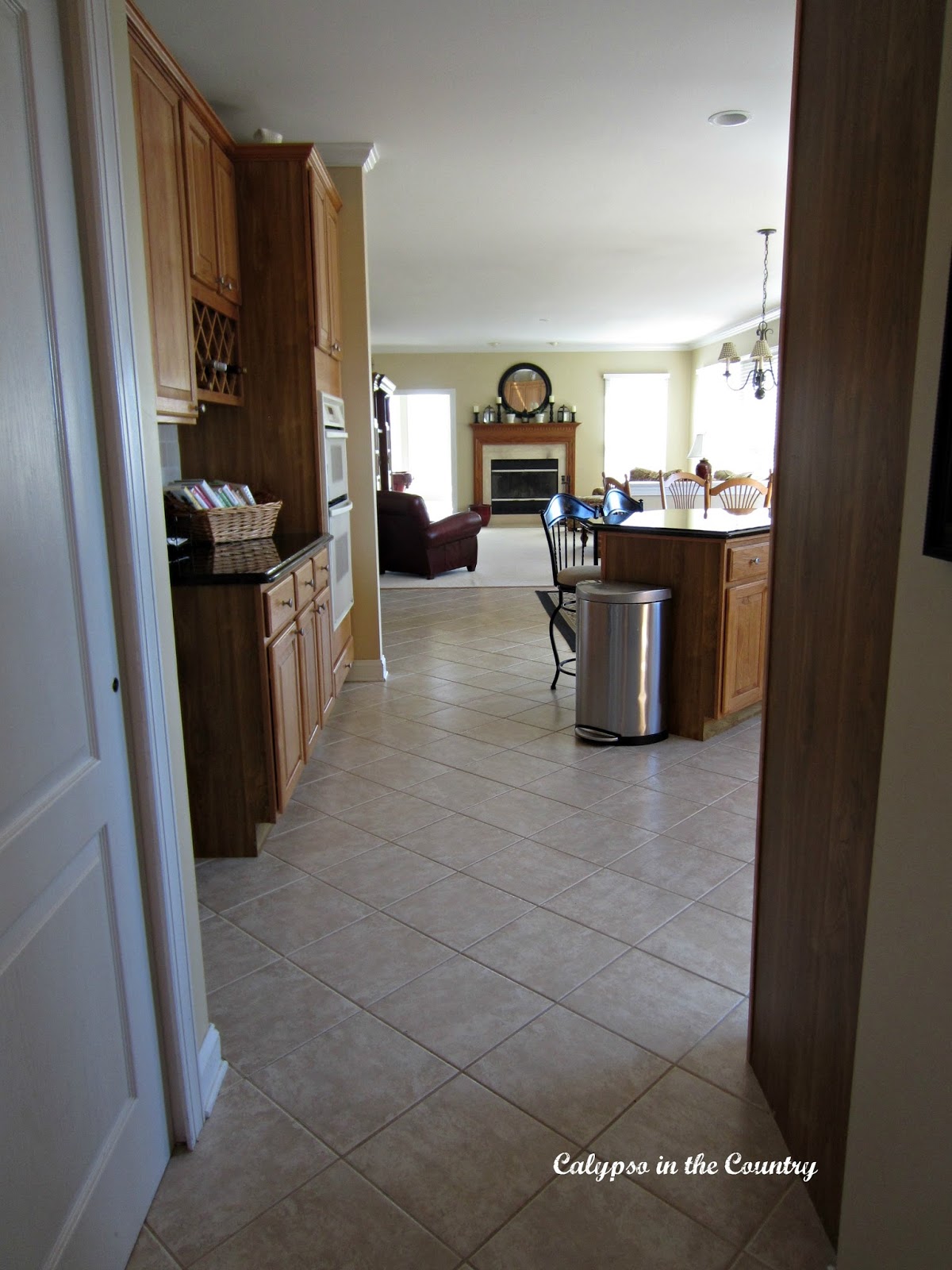 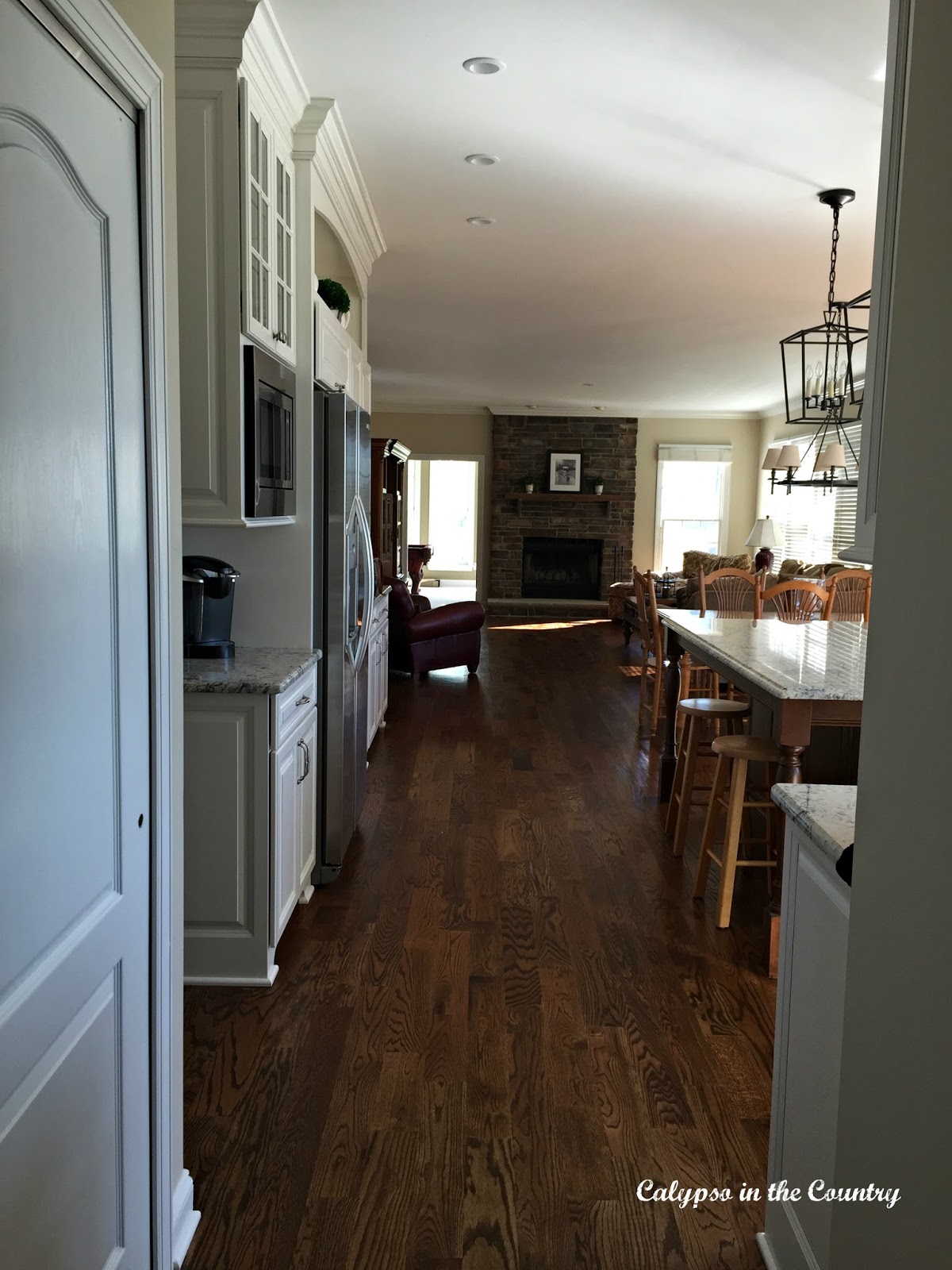 No more tile, no more garbage can!

This photo was taken from the center of the kitchen, looking into the family room. 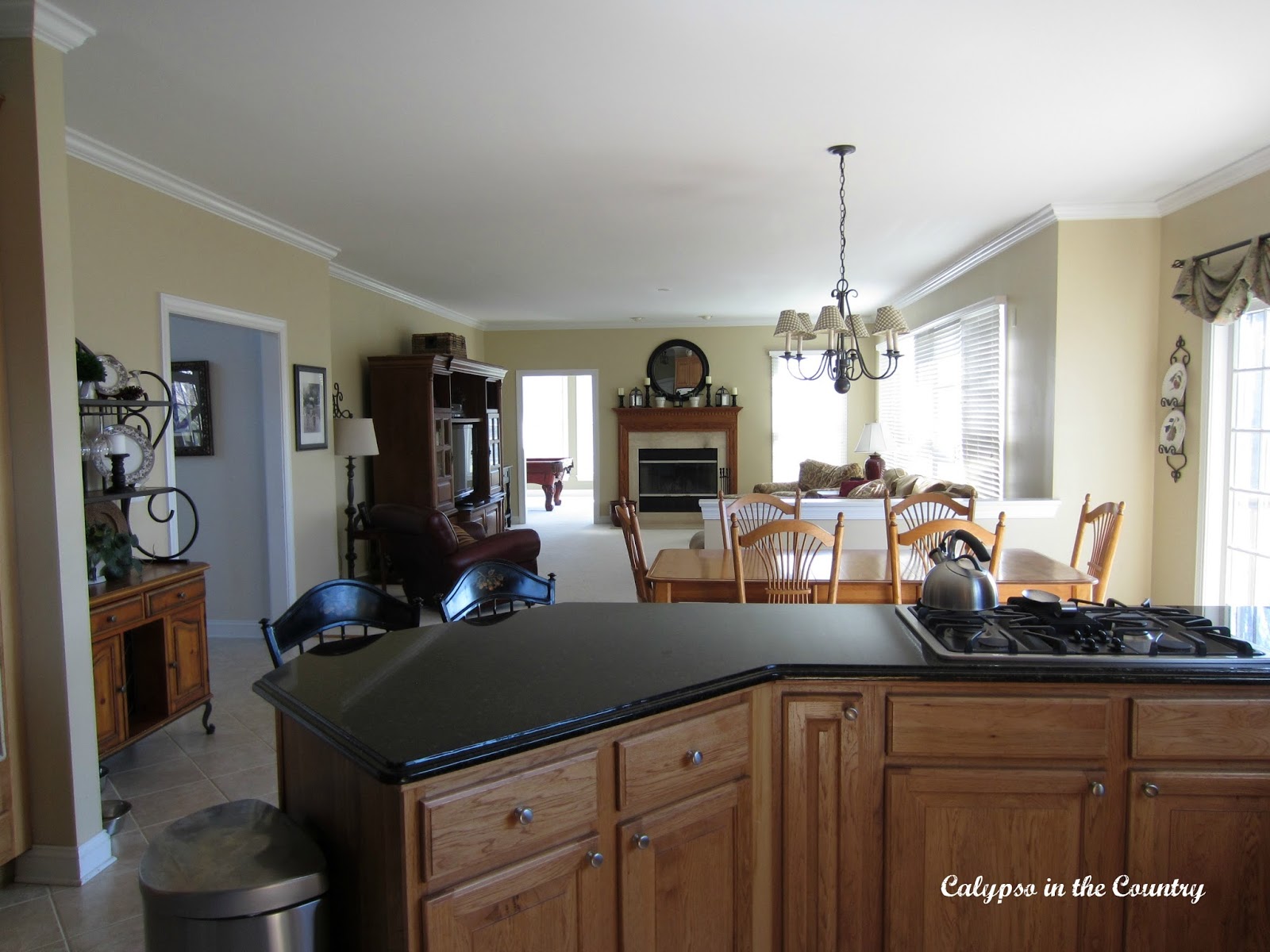 The peninsula cut the room in half and made it difficult to serve food when we had large family gatherings. 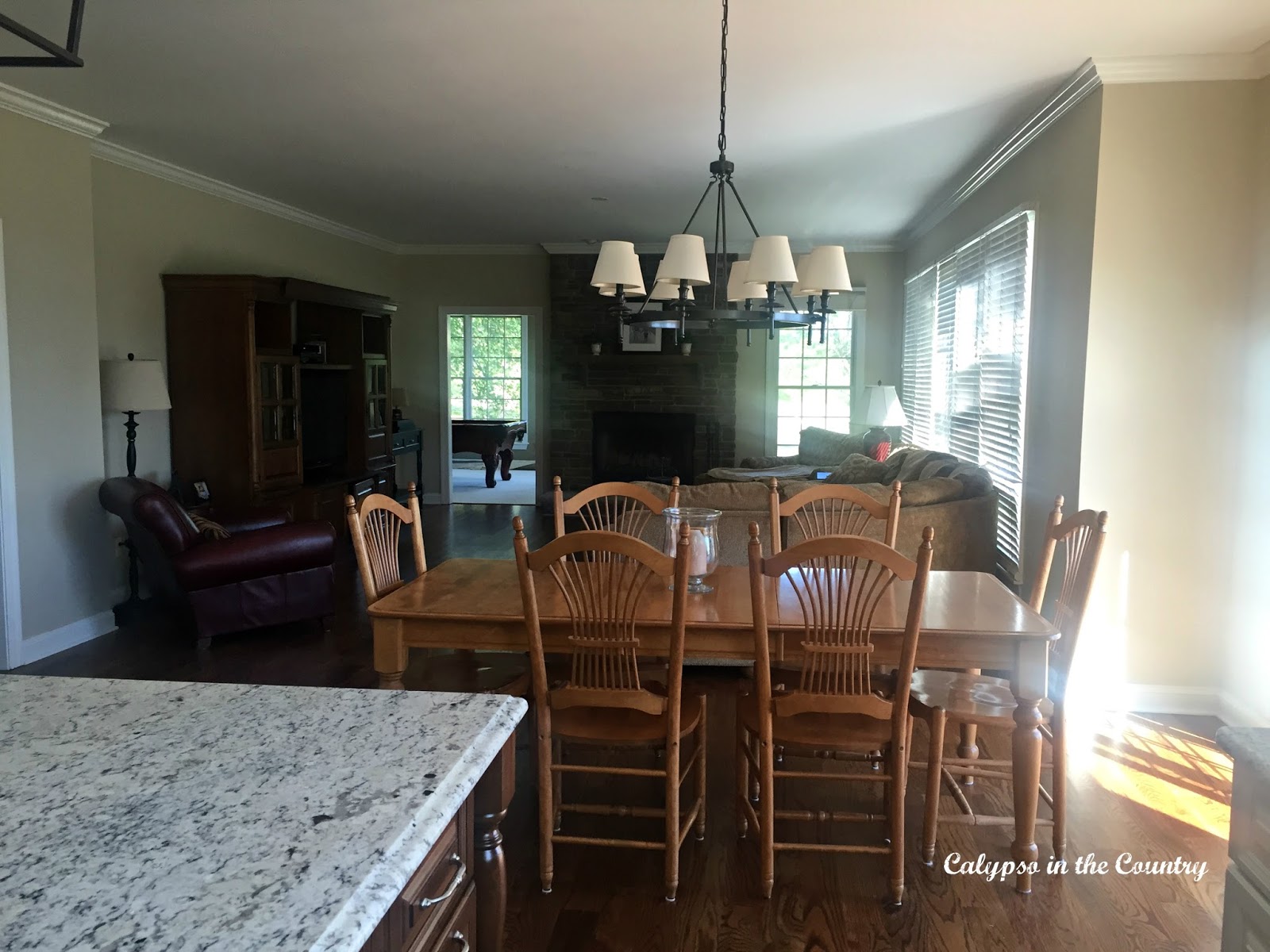 Now it’s so much easier to move around the island!

And this last angle shows the wall we ended up removing.  You can also see down the hall to the back door. 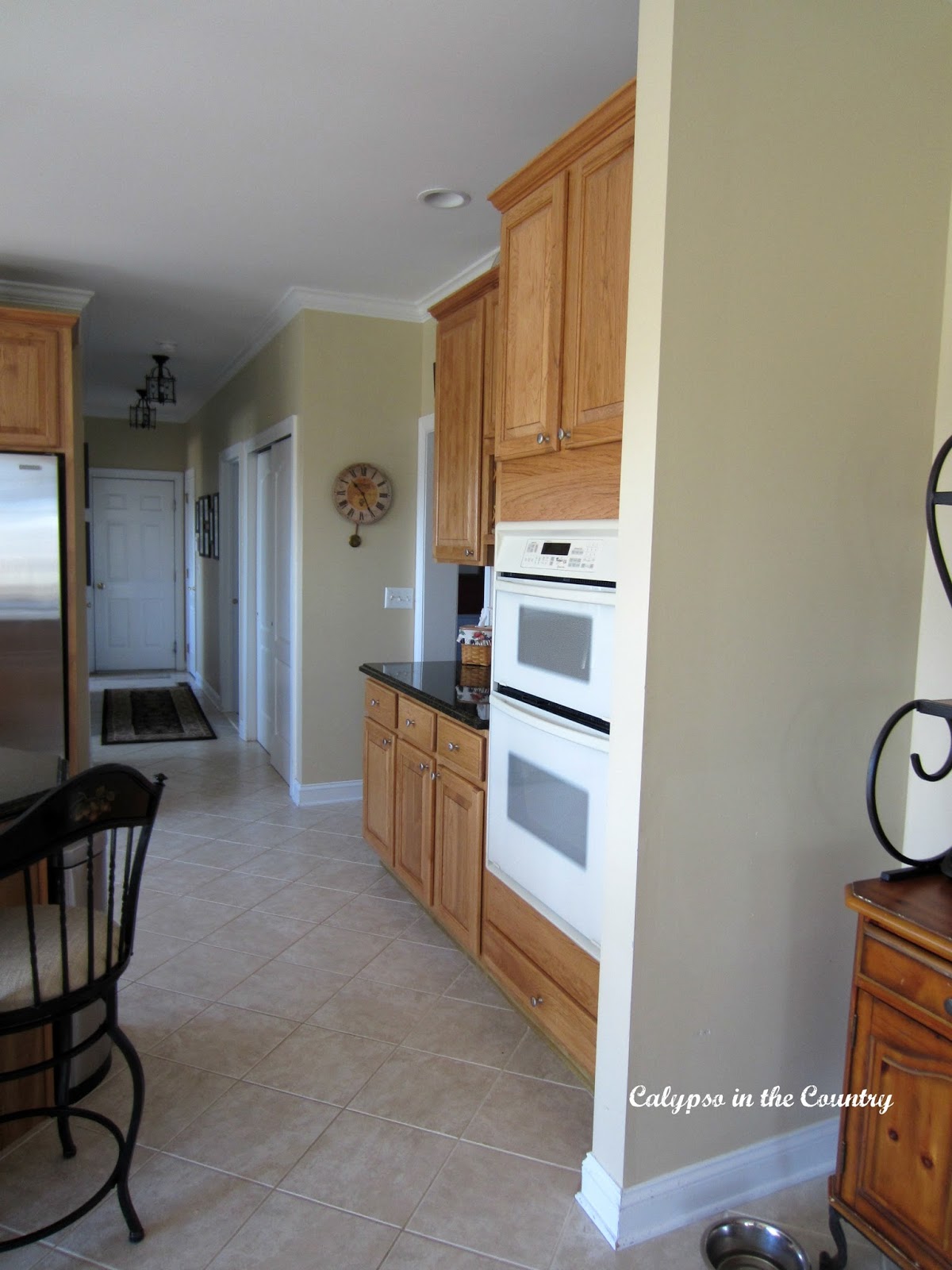 We used to have hanging lanterns in the hallway for lighting.  I was never happy with the way they lit up the hallway though. 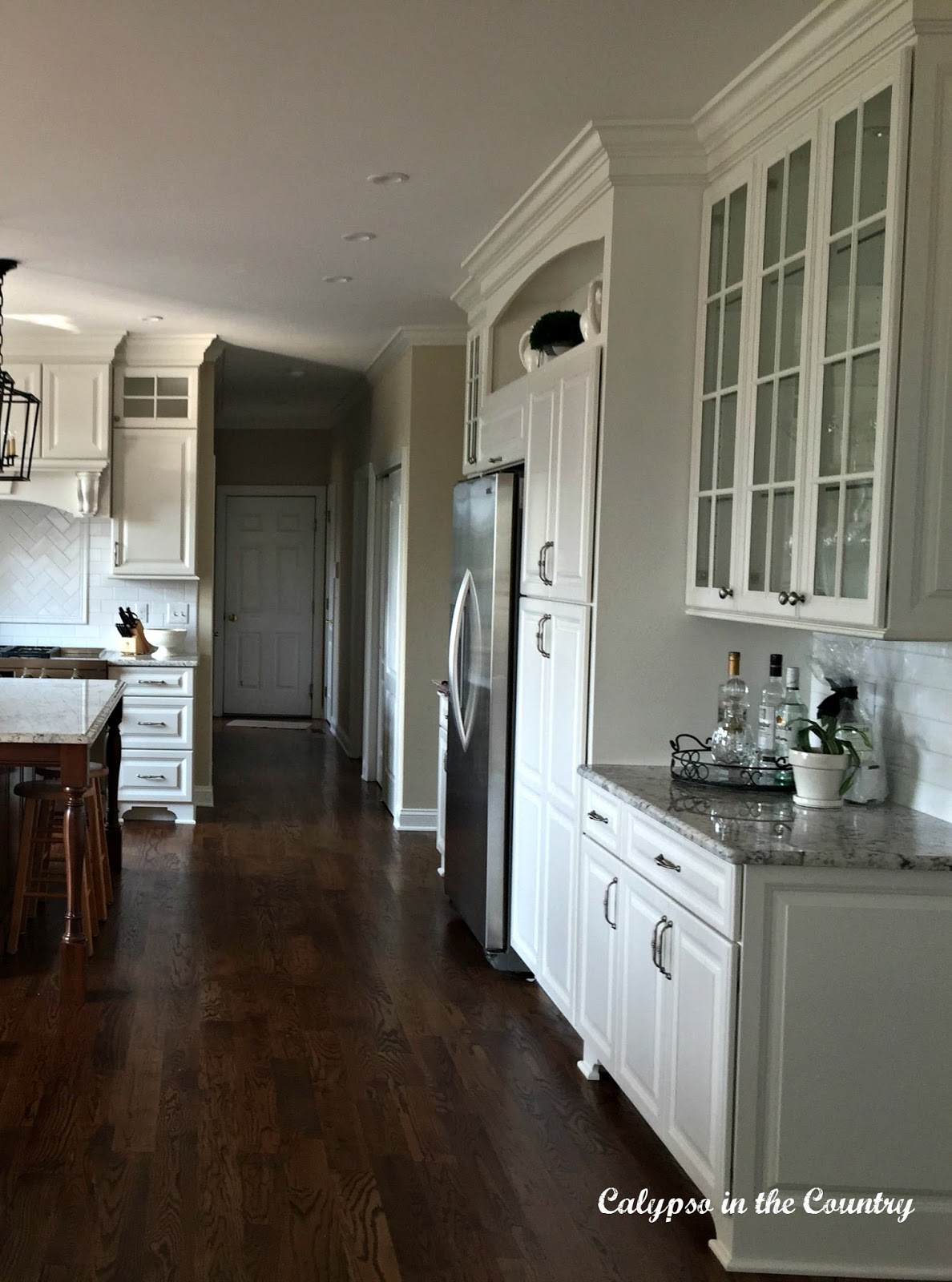 We changed the hallway lanterns to recessed lighting which doesn’t compete with the large lanterns over the island.  And no more wall sticking out to divide the space!

And that’s the full before and after from every angle!
Took me long enough, huh?
Thanks for taking the tour!

You can see more of the kitchen reveal here – My New White Kitchen(and at the bottom of that post are links to all the renovation posts and sources!)  And by the way, I finally bought new counter stools! 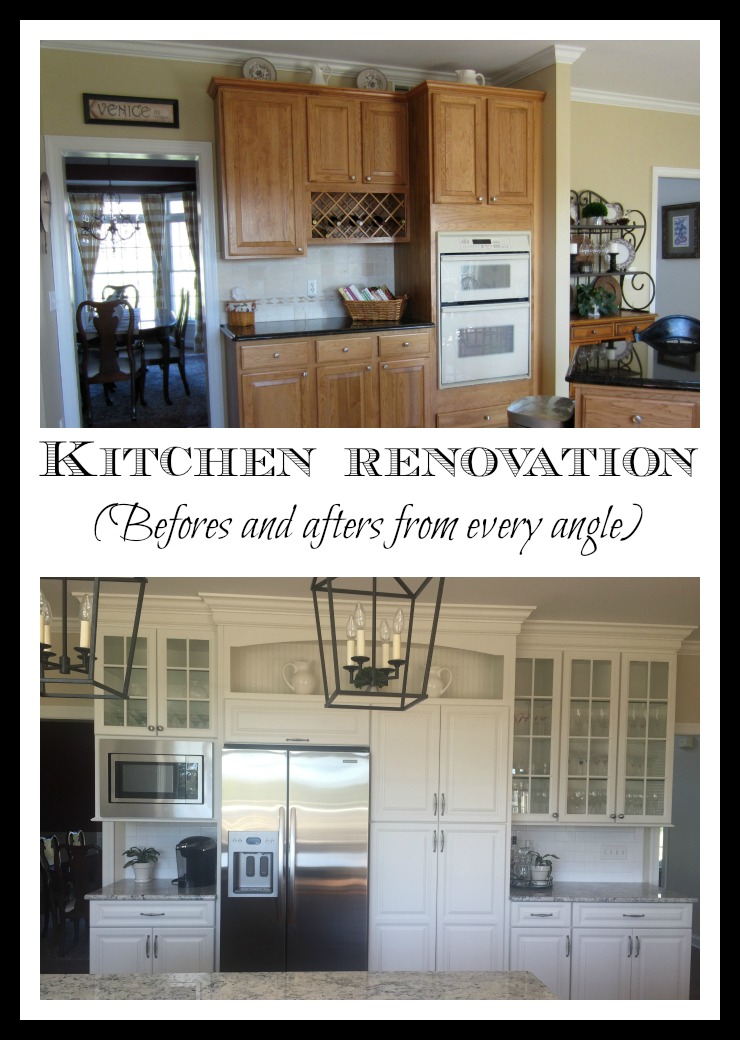 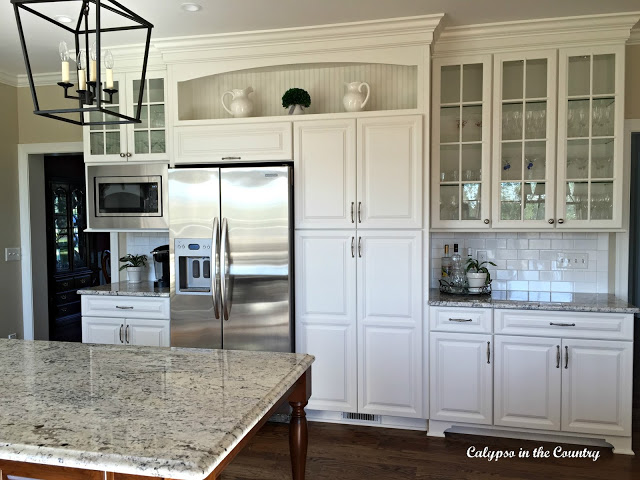 Yesterday, I began putting together some plans for my future office.  Since I was working on this plan while my sweet little boy rested between attacks of a nasty stomach virus, it was hard to stay focused.  Everyone in the school seems to be coming down with this stomach bug.  My 9 year old had…

Yes, we are moving right along with the renovation over here.  Our contractors just installed our new 4 inch red oak floors!  After the cabinets and appliances are in place, they’ll come back to stain and poly the floors. Here are a few rooms…  The foyer view from the living room. Standing in the kitchen…

I am sure we will be bringing lillies or tulips to my in laws for Easter Sunday Dinner. But at home, I tend to keep things more tropical. The coffee table in the living room needed some freshening up. So I picked up a bromeliad at Lowe’s the other day. I wonder how long I…

Happy Weekend and welcome to the Saturday Spotlight!  Are you hosting Thanksgiving this year?  After last year’s intimate family dinner, we’re back to our big extended family celebration this year.  Hooray!  In preparation, I’ve started purchasing my non-perishables already…because who knows what the stores will run out of next!  So, if you’re looking for decor…

Hello friends! Welcome to the Saturday Spotlight, where each week, I like to highlight a different theme or topic to inspire you.  Wow, we’re at the end of October already!  Hopefully, you’re enjoying some beautiful fall foliage where you live.  Here in New Jersey, the leaves have been pretty amazing!  Now as we head into November,…

It’s that in-between stage where the Christmas decor is down but I haven’t yet decided what to do this time of year.  What better time to experiment with my fireplace mantel! Let’s look back at my mantel decorated in 4 different warm weather themes: (Please click the link below each photo to take you to…