If you’re a regular reader of my blog, you might remember my endless search for counter stools. Well, I’m happy to report that I finally decided on new wooden counter stools and I couldn’t be happier.

Wooden Counter Stools – the Search is Over!

After all, we completed our kitchen renovation over a year ago.  It’s about time I finally made a decision!  Even Rosie was wondering what took me so long! 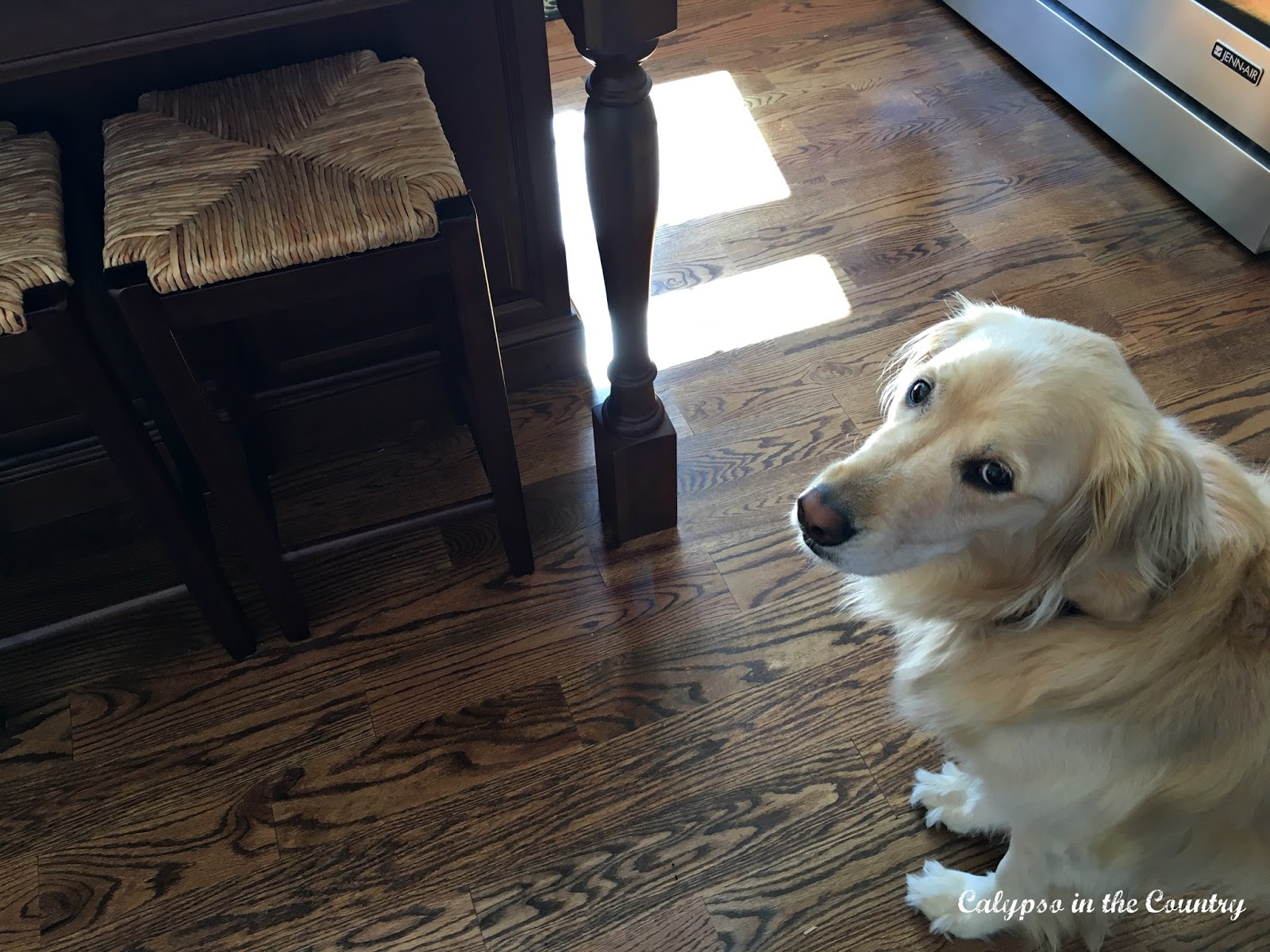 Please note, this post contains affiliate links.  If you click my links and make a purchase, I will receive a small commission at no additional cost to you.

As you can see, the new wooden counter stools have arrived… 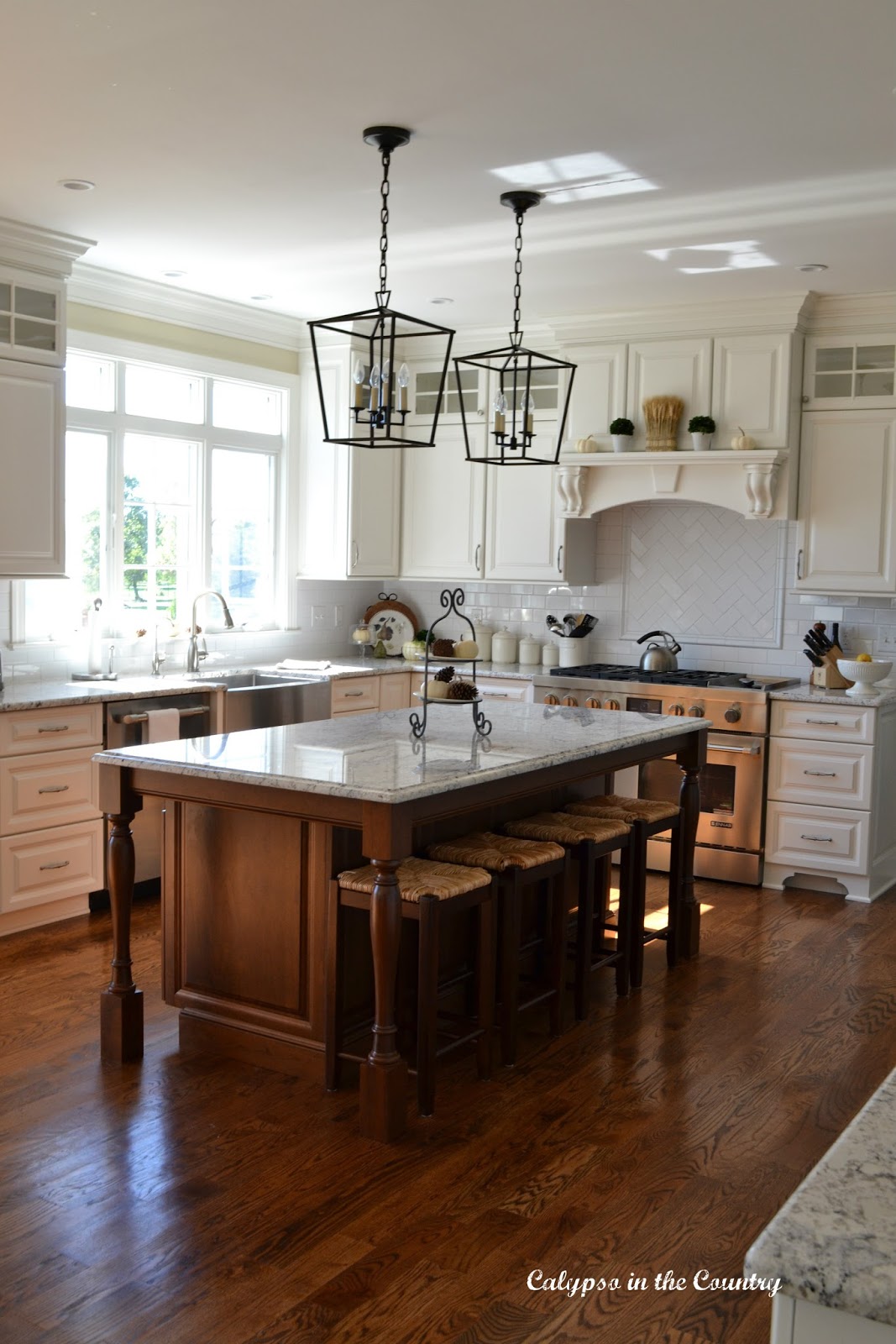 After way too many hours spent obsessing, these counter stools were the winners!

Not only do these stools work well in the space but I am almost embarrassed at how ridiculously inexpensive they were!  I have seen similar looking wooden counter stools at Pottery Barn and Grandin Road that are nowhere near this price! 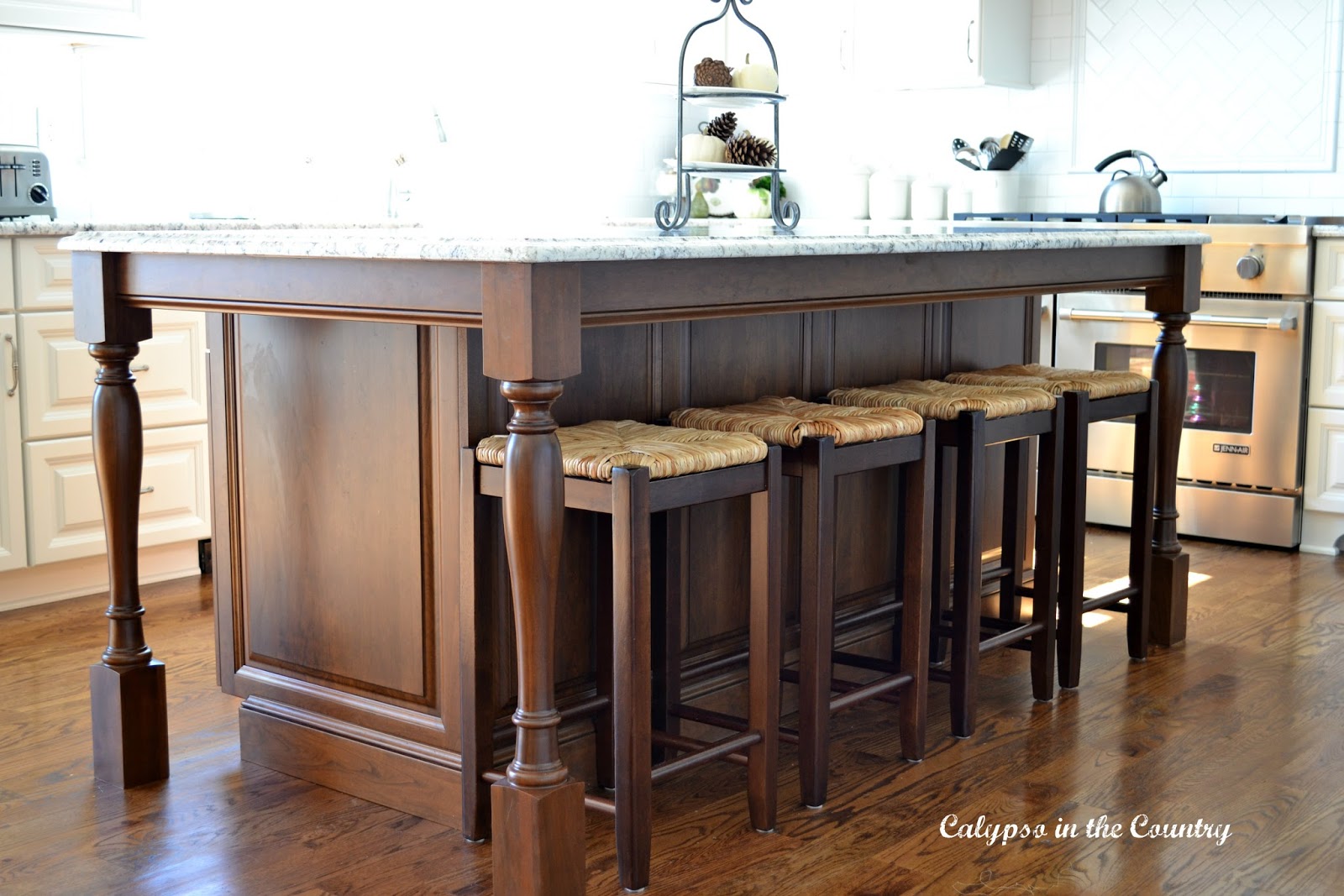 Not only was the price amazing but these stools also came assembled!

I didn’t know what to expect before they arrived because some of the reviews stated they were easy to assemble and some reviews mentioned how they came assembled.  Luckily, mine arrived assembled.  All I had to do was open the box and place them in the kitchen! 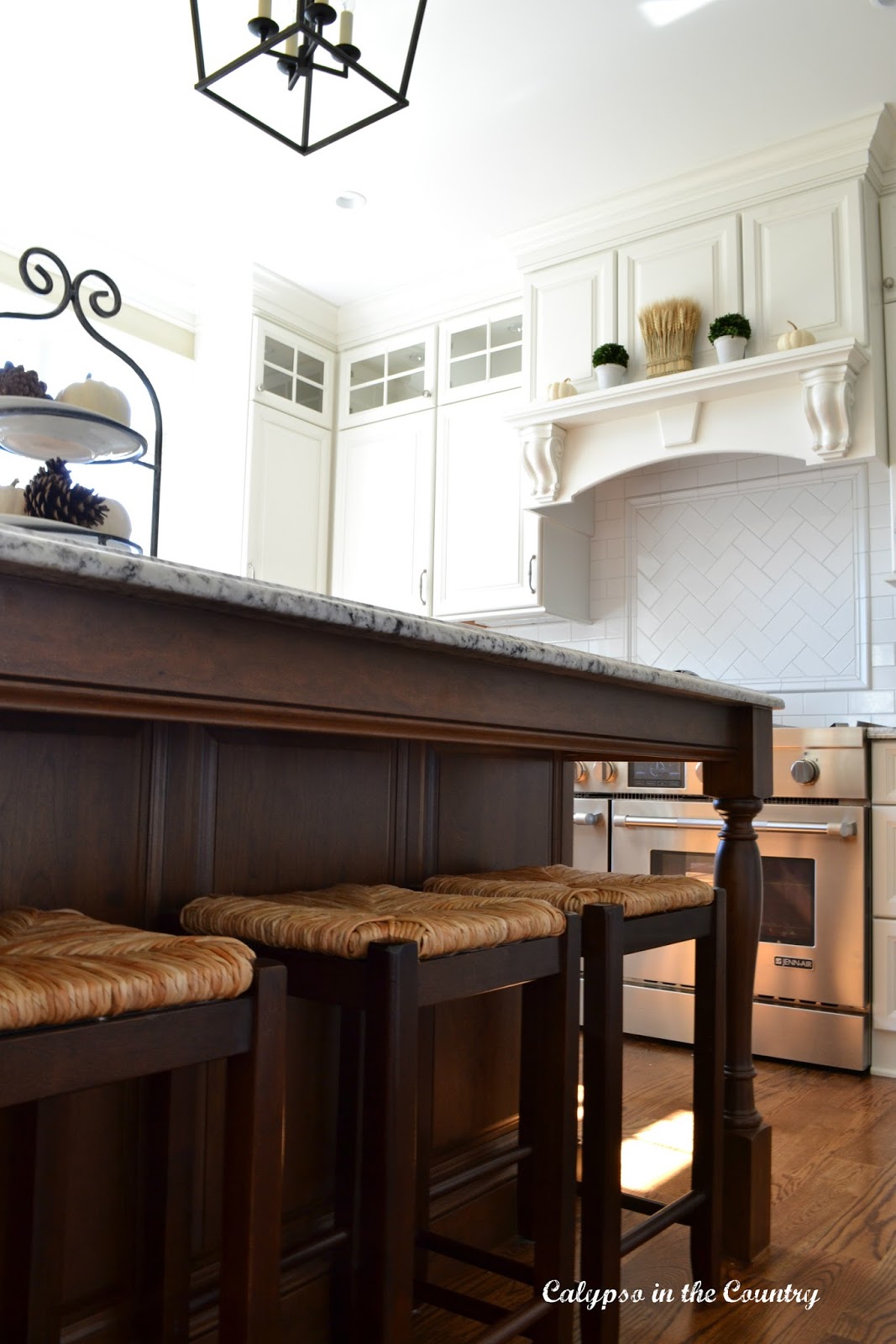 I was also pleasantly surprised at how well the wood color matched my island. 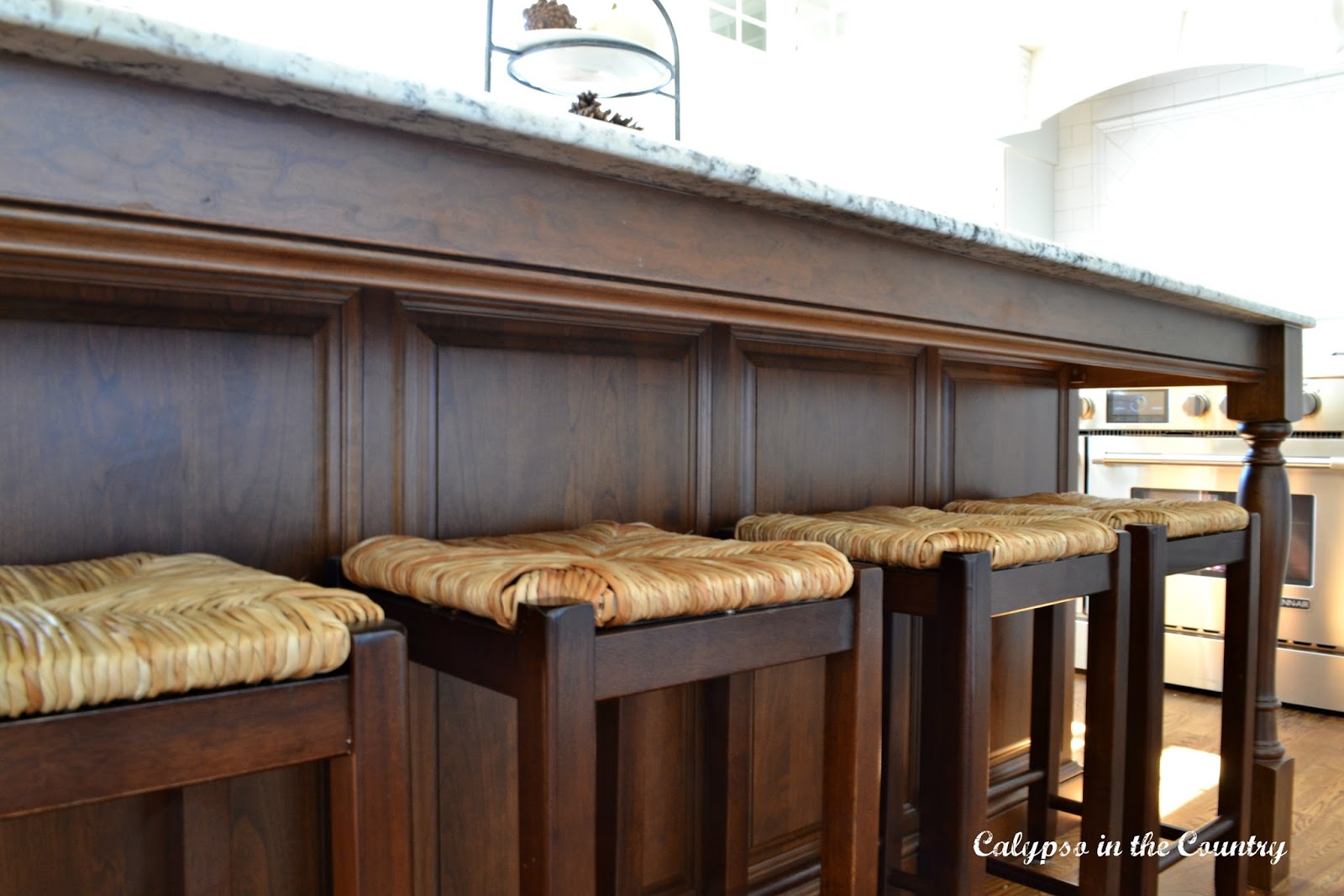 They are slightly darker than the island but I am not going to be that picky!

Actually, I like the little bit of contrast.  I also like the rush seats which weren’t even one of my requirements when I began my search.  Now that I have them, I love the texture of the rush seat and the way they give a casual cottage feel to the kitchen. 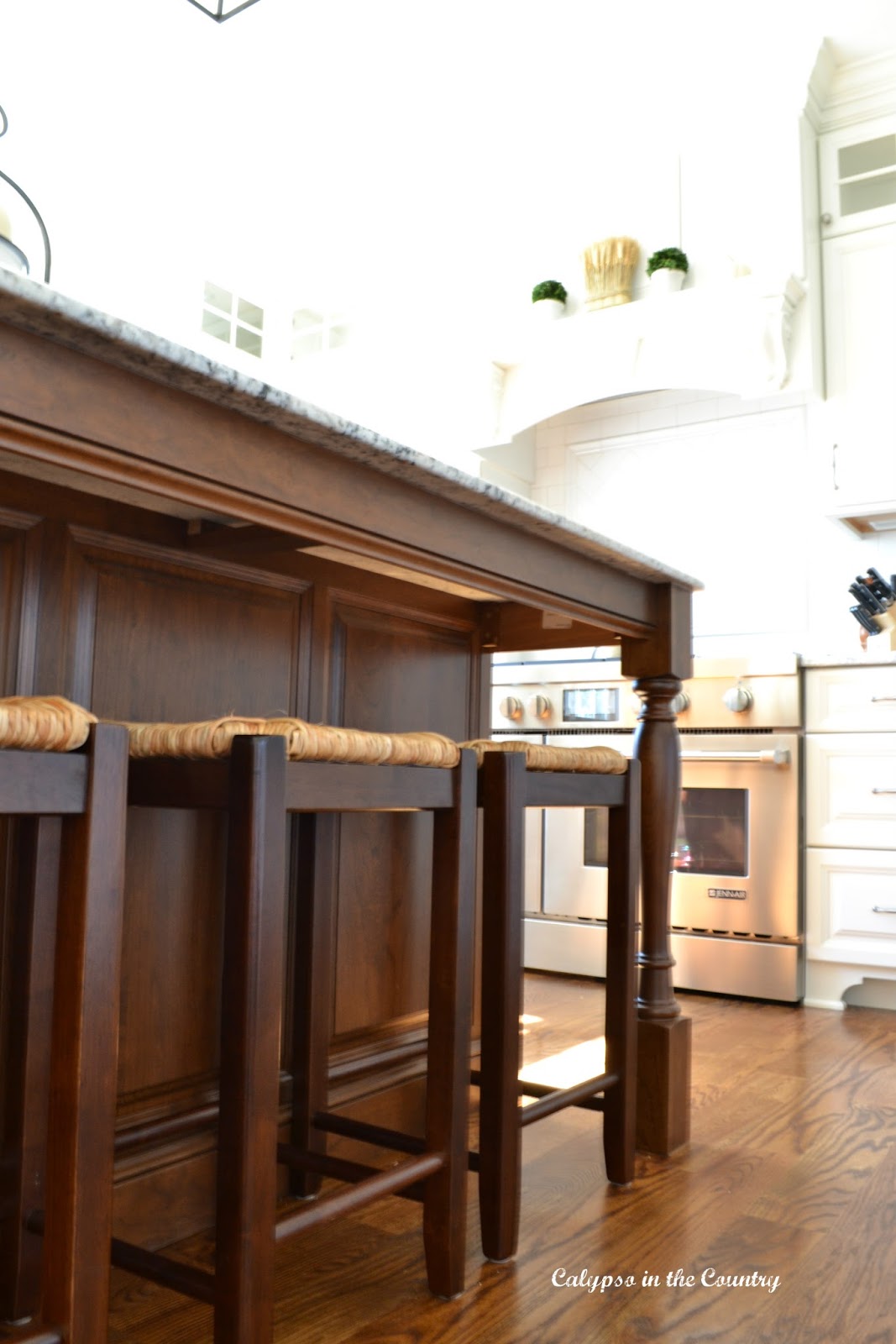 For the longest time, I wasn’t sure if I wanted counter stools with backs or backless.

It took a lot of ‘family observing time’ to decide which type of counter stool was right for us.

These were the temporary stools we used until we decided… 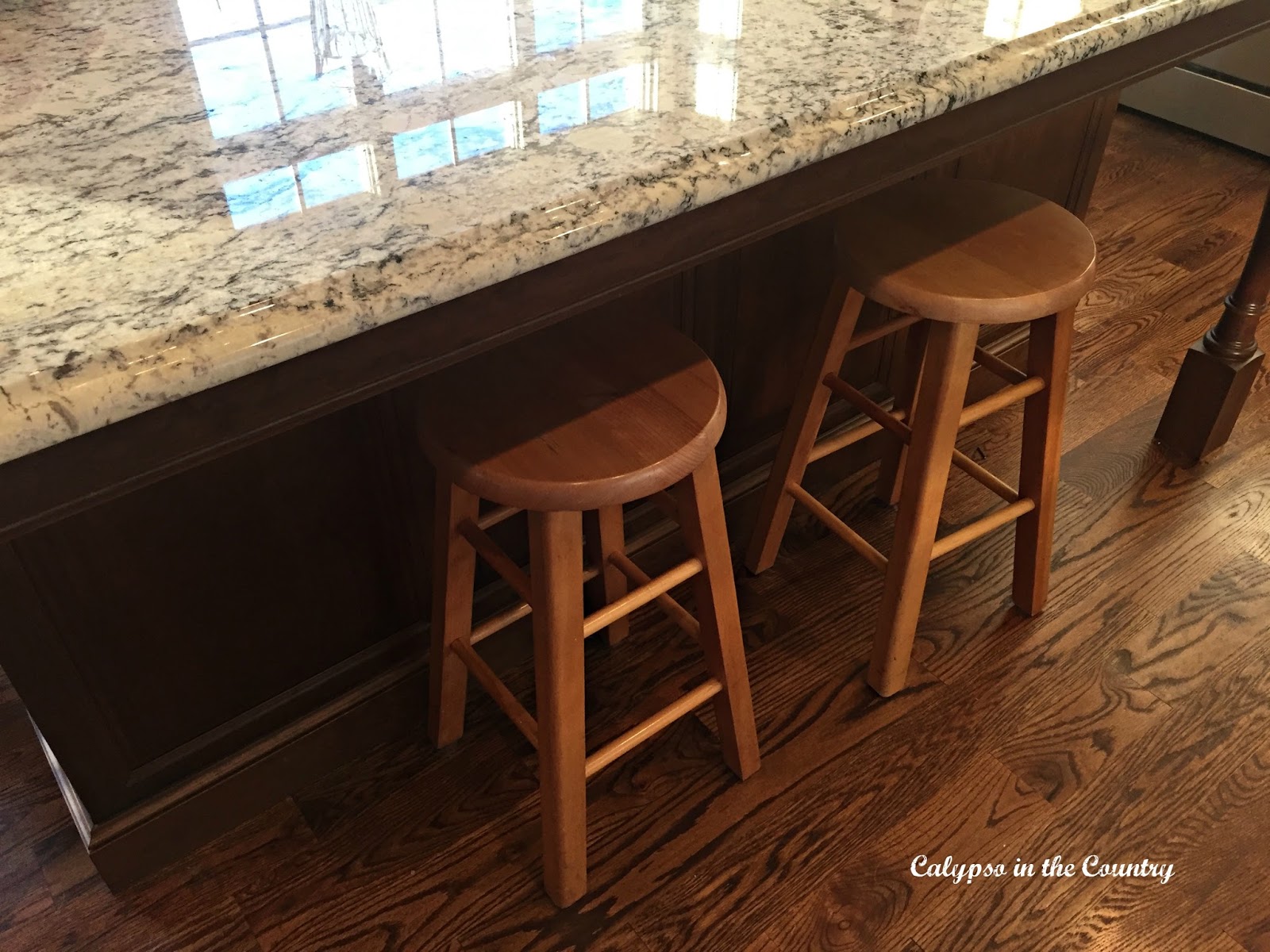 From the beginning, I liked the way we were able to tuck the old wooden counter stools easily under the kitchen island.  I also realized that my boys are the ones who used them the most.  They like to just grab them and hop on.  Most likely, they wouldn’t use the stools as readily if they had to carefully pull them out.  Boys don’t seem to do anything “carefully”. 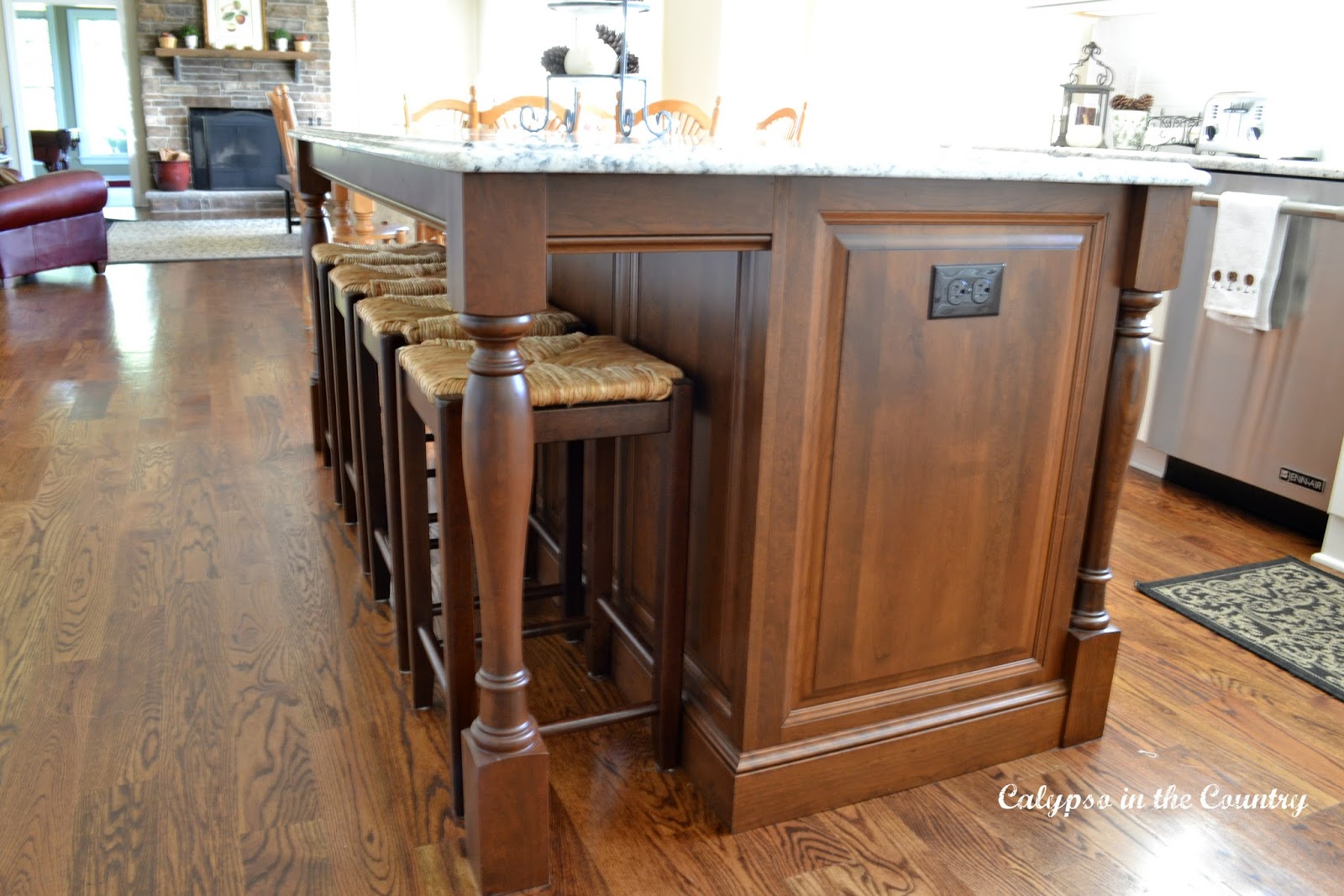 Plus, when I mention boys, I have to mention messes!  Many of the counter stools I loved were upholstered and that is just asking for trouble!  I could just imagine the first time something got spilled on them.  Not a happy thought!

Now I don’t have to worry about destroying fabrics.

With the way the new stools tuck neatly under the counter, it’s less likely something will be spilled on them anyway.

Plus, if it happens, who cares?

I can wipe them easily or replace them if needed.  No headaches there.

Ironically, I was the one who spilled something yesterday morning when I grabbed a gallon of milk out of the fridge.  The container slipped out of my hands, bounced on the floor, split down the side and splattered milk in every direction possible.

Yes, I now have milk spots on my ceiling!  Milk actually hit the glass sliding doors and even the coffee table in the family room!  I kid you not!  Only a few drops splashed onto the side of the new counter stools.  But needless to say, I spent most of yesterday scrubbing every inch of my kitchen.  Did I mention, I was on Day 3 of a migraine headache?…yeah good times… 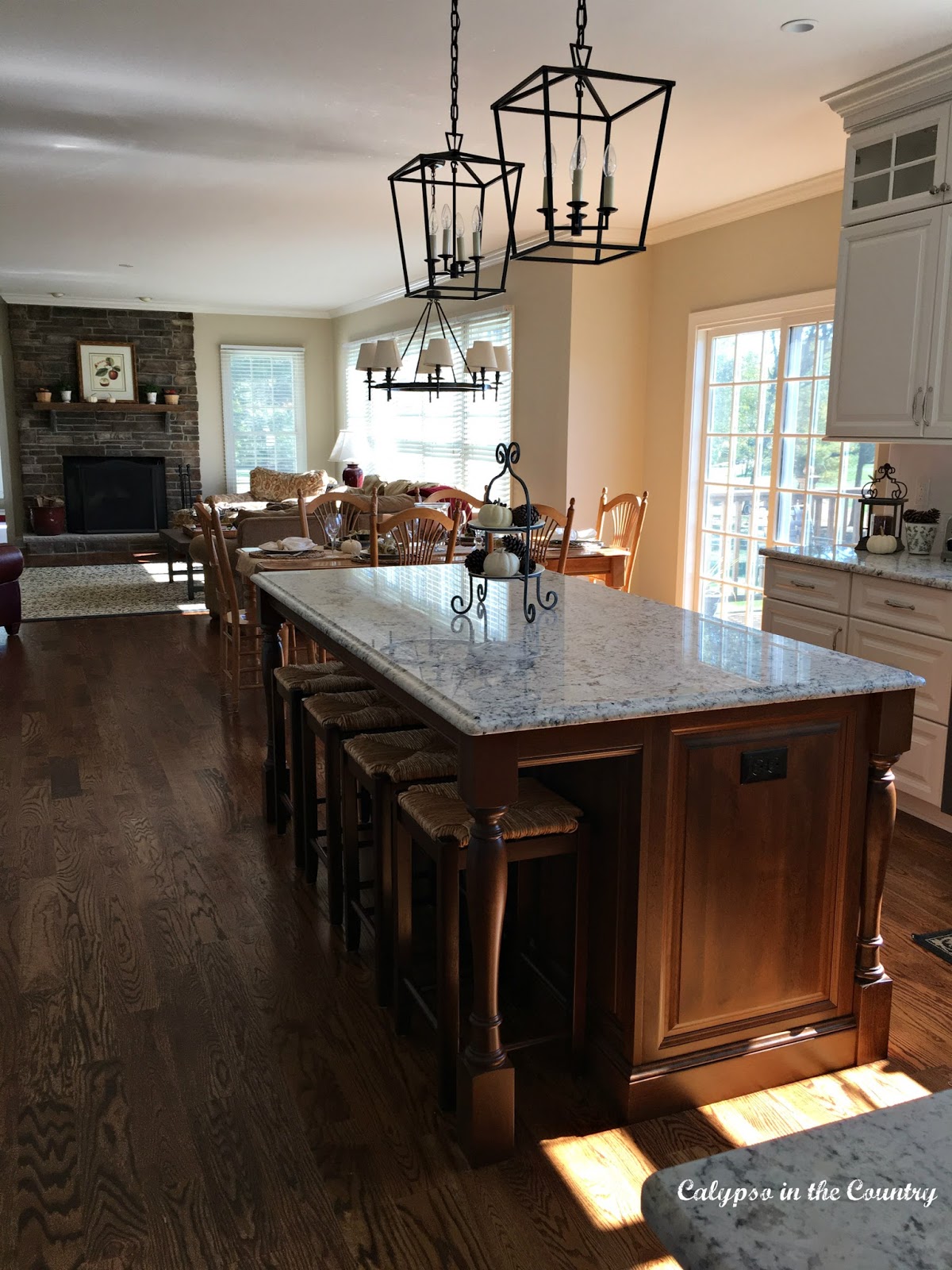 These wooden counter stools really do look and feel more expensive than they really are! 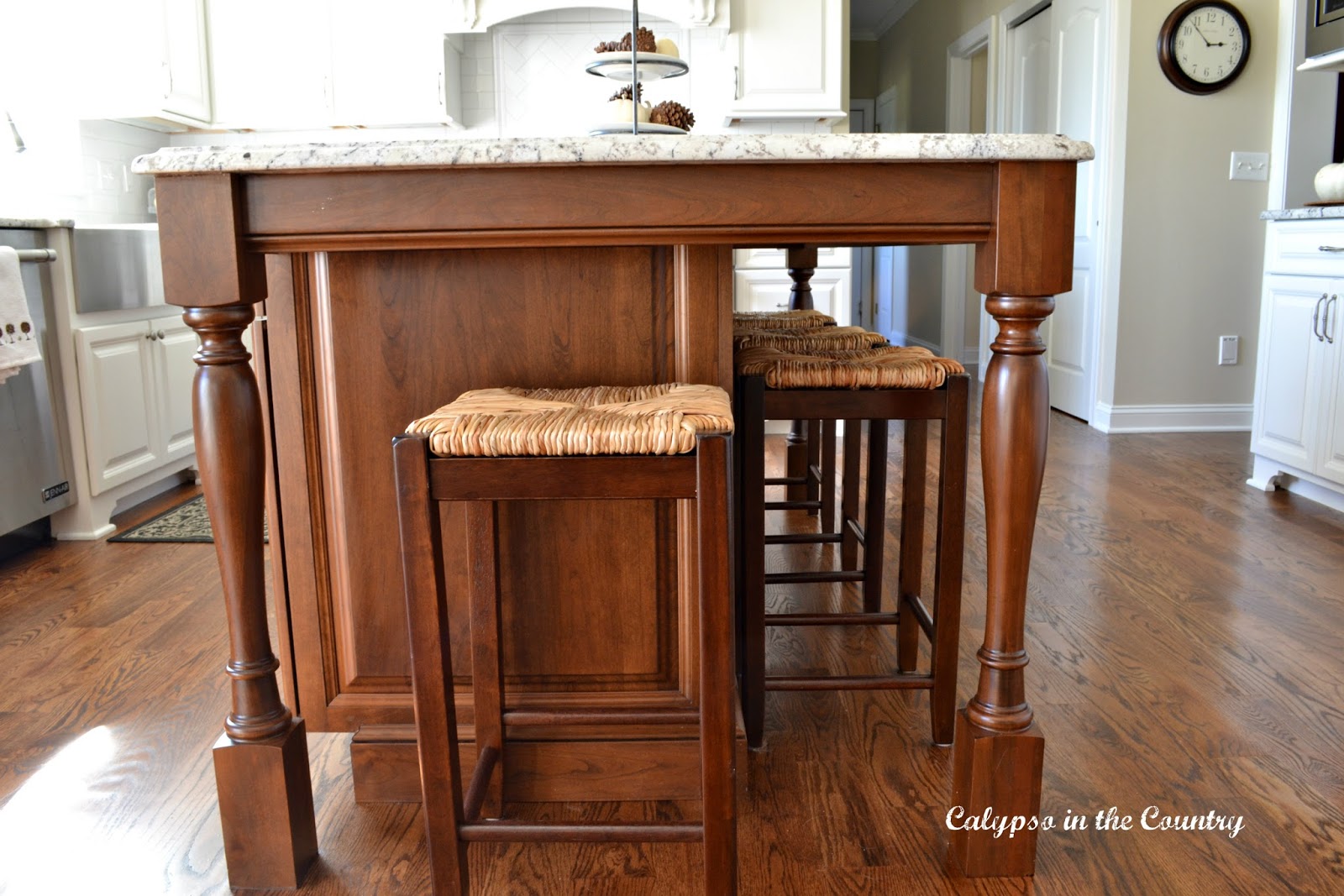 Another consideration when buying stools focused around this end of the island.

Most stools I looked at were much larger but these are only 13.5 x 13.5 wide.  And why was a smaller stool important?  Well….I kinda made a mistake when we set up the kitchen by not making the overhang large enough on this end.

My kitchen designer planned it correctly with a few extra inches but at the last minute I panicked and wanted more space at the other end by the stove.  I had my contractor move the island down a few inches but we didn’t want the island to extend past the end of the perimeter cabinets.  We had to sacrifice a few inches on this end and I have regretted it ever since.

Moral of the story, listen to the professionals.  Anyway, I haven’t decided if we will actually keep a stool here or if we will just move it there as needed. 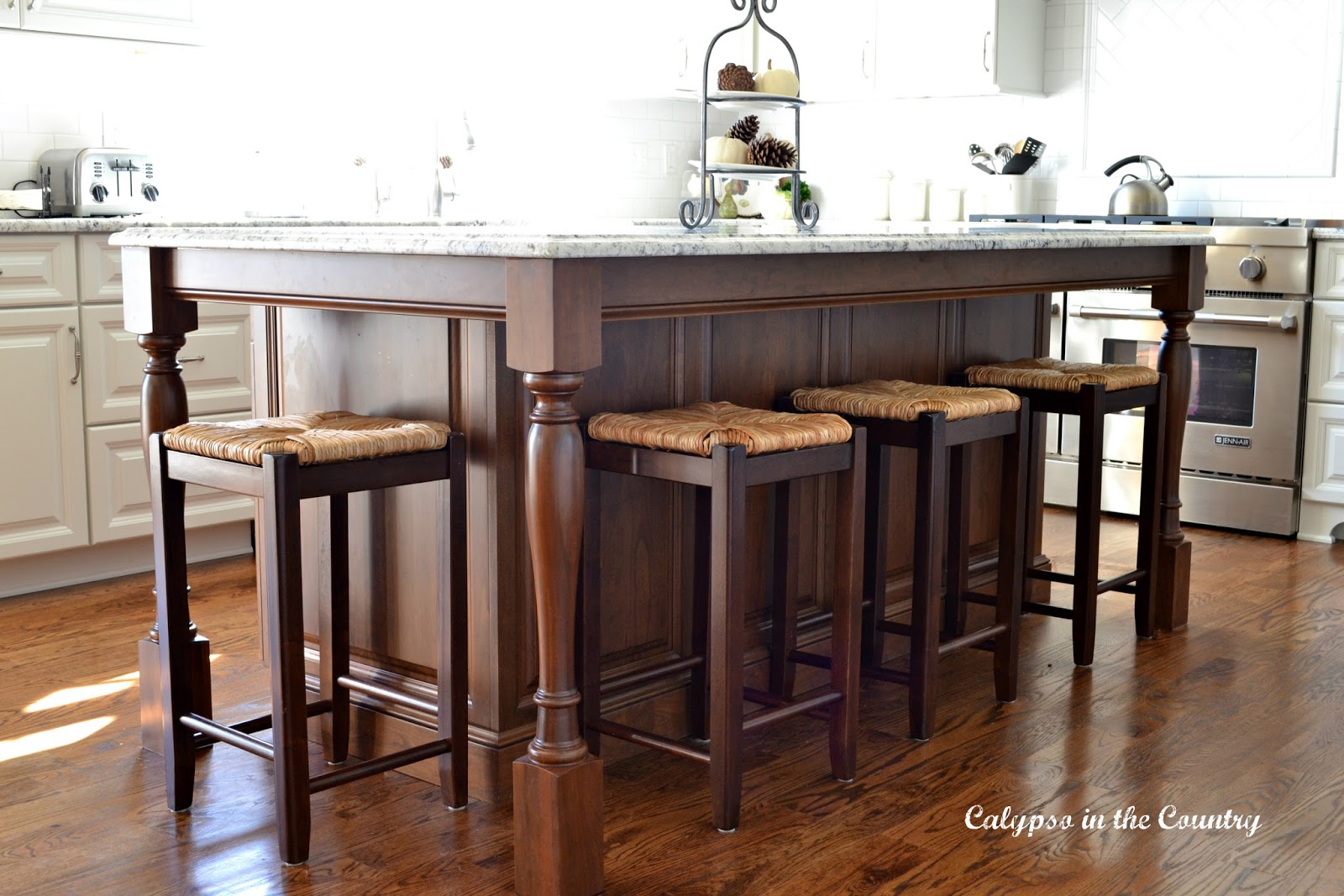 Here is how the counter stools look with one on the end. 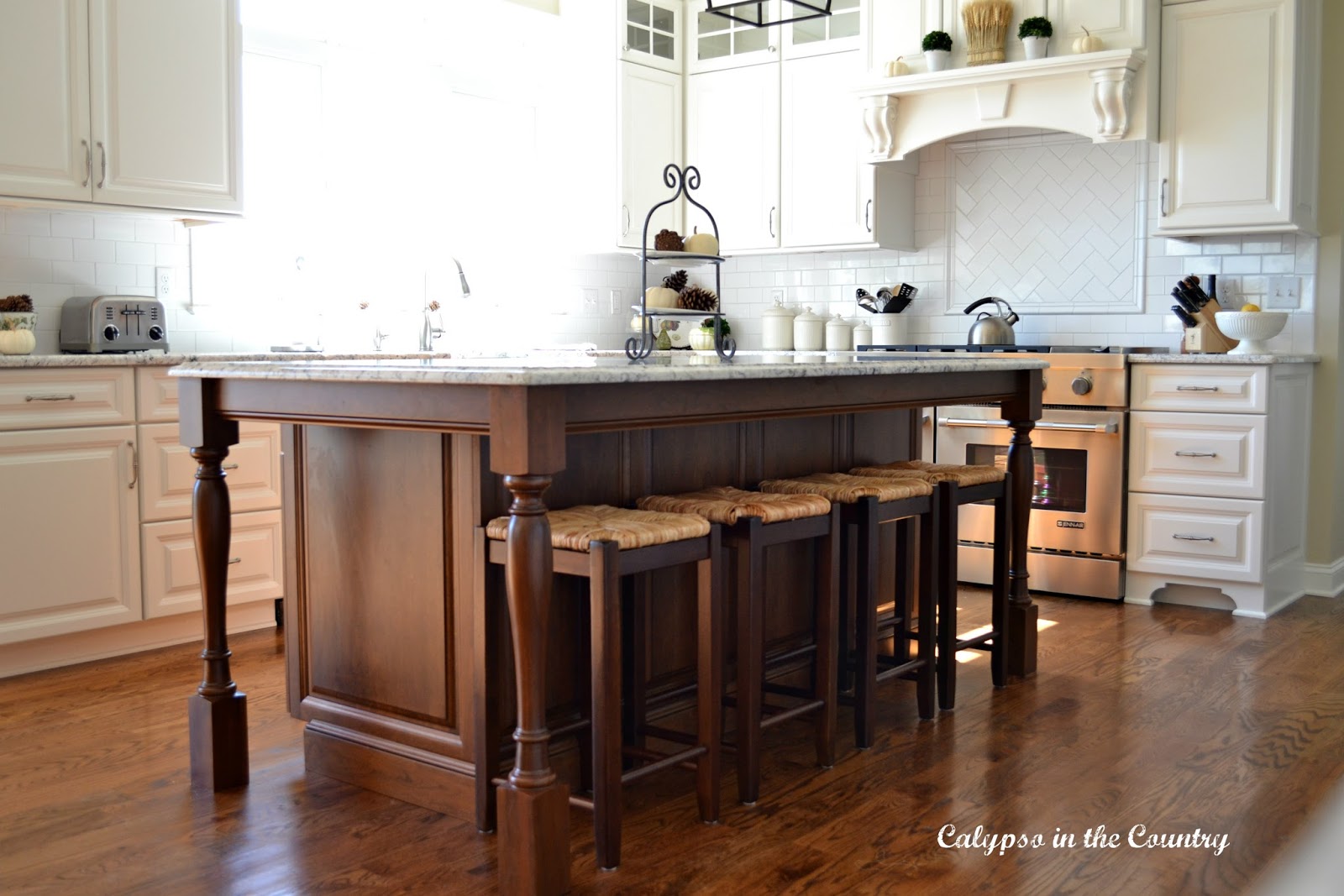 And here again is how they look with all of the stools neatly tucked under the long side.  I think this is the way we will store them and then move it to the end as needed.  It would be a bit crowded if four people sat next to each other on that side.

Anyway, I’m so happy with the new wooden counter stools!

In case you got lost in all my long-winded explanations above, here are the reasons I chose these counter stools:

If you really want to see how obsessed I was about buying stools, you can check out my Counter Stools Pinterest Board or even my Kitchen Pinterest Board!

So yes, finally I have my new wooden counter stools!

Have you ever taken a year to decide on furniture? 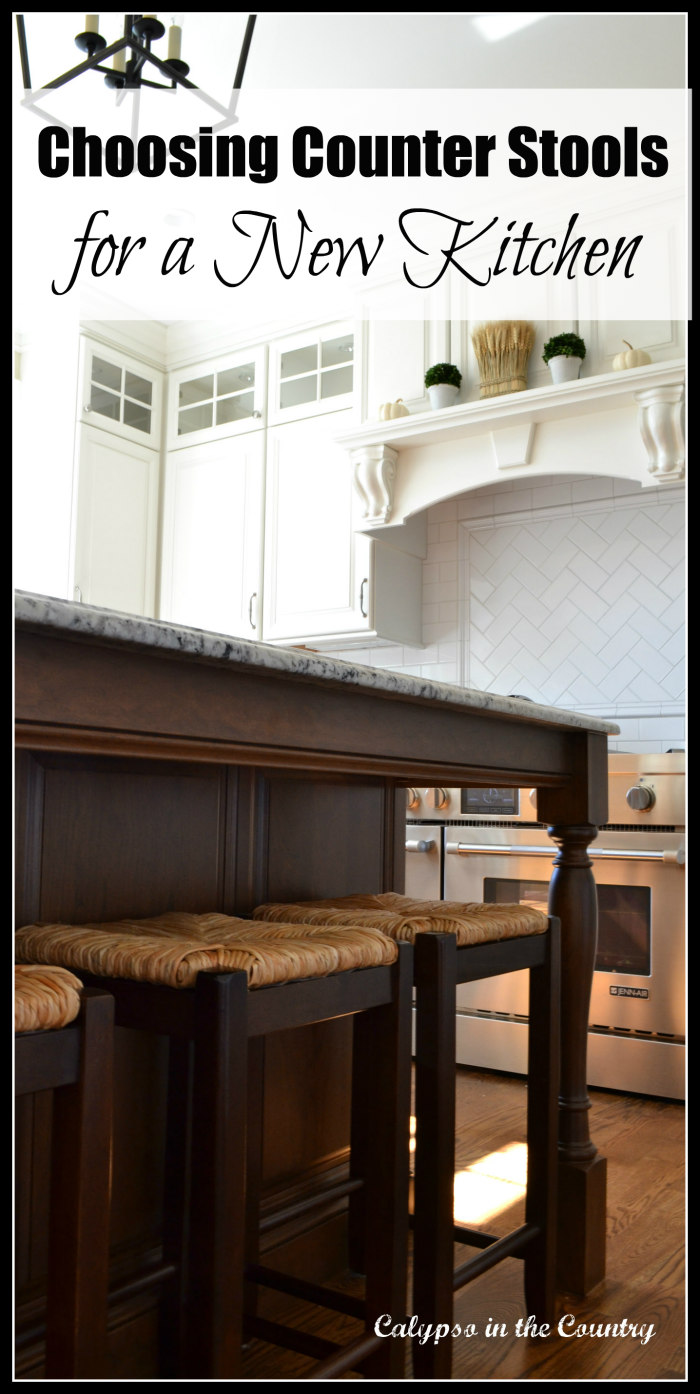 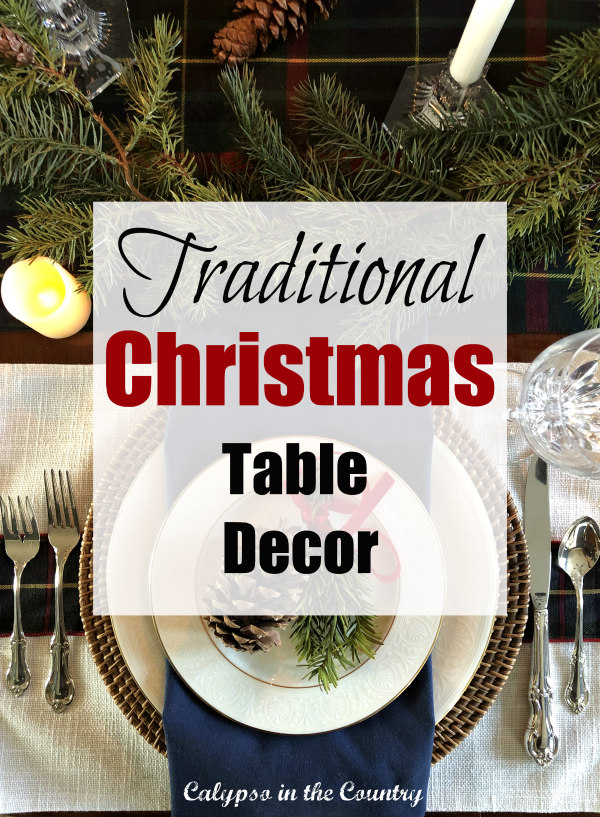 Happy December everyone!   Have you started your Christmas decorating yet?  Well, if you’re looking for table inspiration, I have a bunch of beautiful ideas for you!  Today, I’m joining a group of talented bloggers for a Christmas Tablescape Blog Hop hosted by Chloe of Celebrate and Decorate.  Each of us will be sharing our latest holiday tablescapes. … 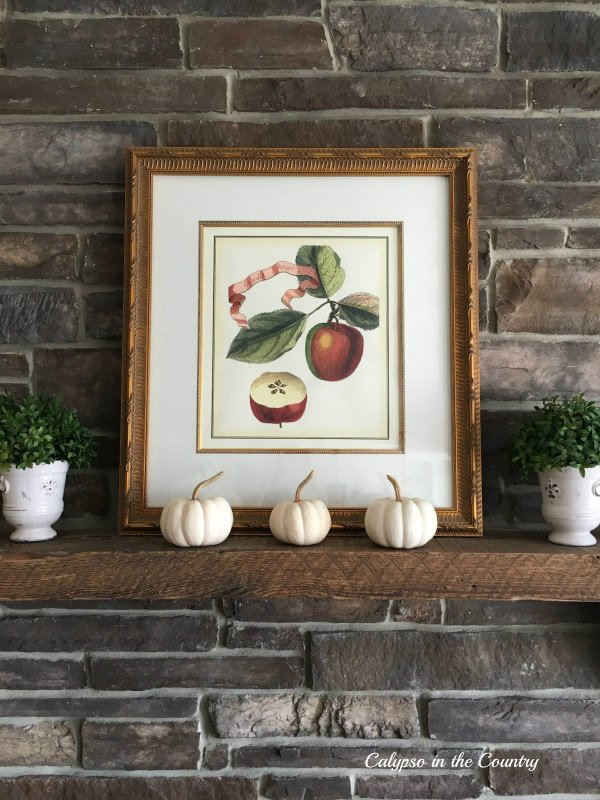 Since, we are finally getting some cooler days, I thought it was time to decorate a fall mantel with apples and pumpkins!  After all, this is only the second year we’ve had this stone fireplace.  I have been eager to play around with it a bit… *Please note that this post contains affiliate links.  I…

My son’s room went through a bit of a transformation recently as shown here…My Son’s Room – Before and After When I posted the change, I still needed to add some wall art and accessories. He wanted a US map… and today it arrived! As you can see, I didn’t hang it yet. I propped…

This is the first year we added a Christmas tree to our foyer. Come on in and take a look! I have had this artificial tree in our basement for years.  We always get a real tree for Christmas so this was the extra tree for those years I wanted two.  (I only put it…

Well, Fall has officially arrived!  Though, you would never know it around here with these warm temperatures.  So far, I’ve started some fall decorating.  Of course that feels strange with the air conditioner on…but what can you do? You can try a delicious banana muffin recipe…that’s what you can do! *Please also note that this… 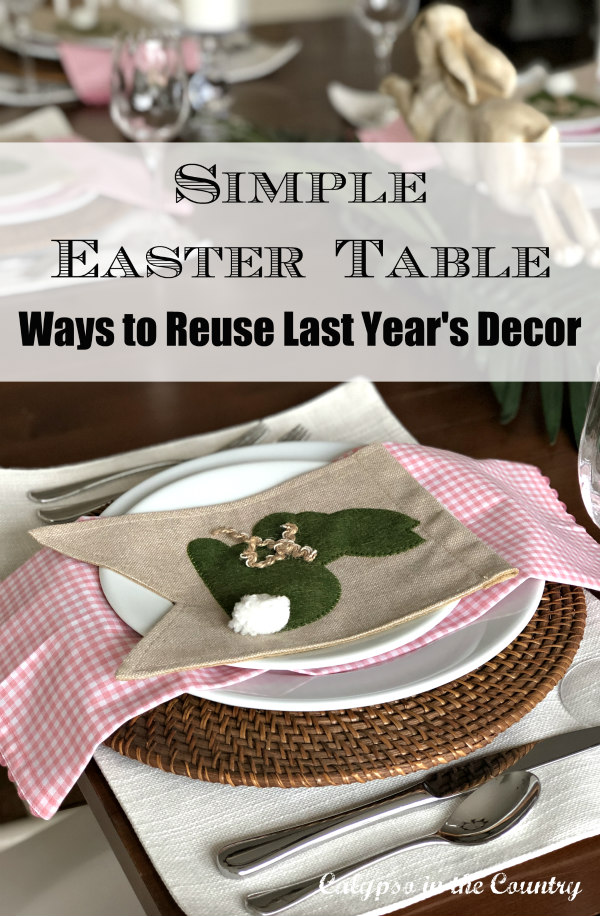 Well, it looks like this Easter will be very different from every other year.  Like most of you, we won’t be hosting any guests but would still like to set a pretty table for our immediate family.  Needless to say, this year we have to get creative with the Easter decor. Since I won’t be…