I swear my husband blames me for our younger son being the class clown.  Not that I was ever a “class clown” by any stretch of the imagination!  Actually, I was a shy, quiet child.  Although, I guess I have always been pretty silly and I can appreciate good humor when I see it.

So, when my sweet son showed signs of being very funny, maybe I encouraged him just a bit!  Honestly, the kid makes me laugh every single day – most of the time without even trying!  We even keep of list of funny things he says or does.  When he recognizes he has come up with another gem, he will say, “Mom, we should add that one to the list!”

When he was a baby, I dressed him up for Halloween as a spider.  But when I was changing him out of his costume that night, his little black turtleneck and leggings reminded me of the Saturday Night Live character, Dieter.  (Click HERE if you don’t know the character.)  Needless to say, I slicked back his hair, grabbed a pair of glasses and a monkey… and Baby Dieter was created.! 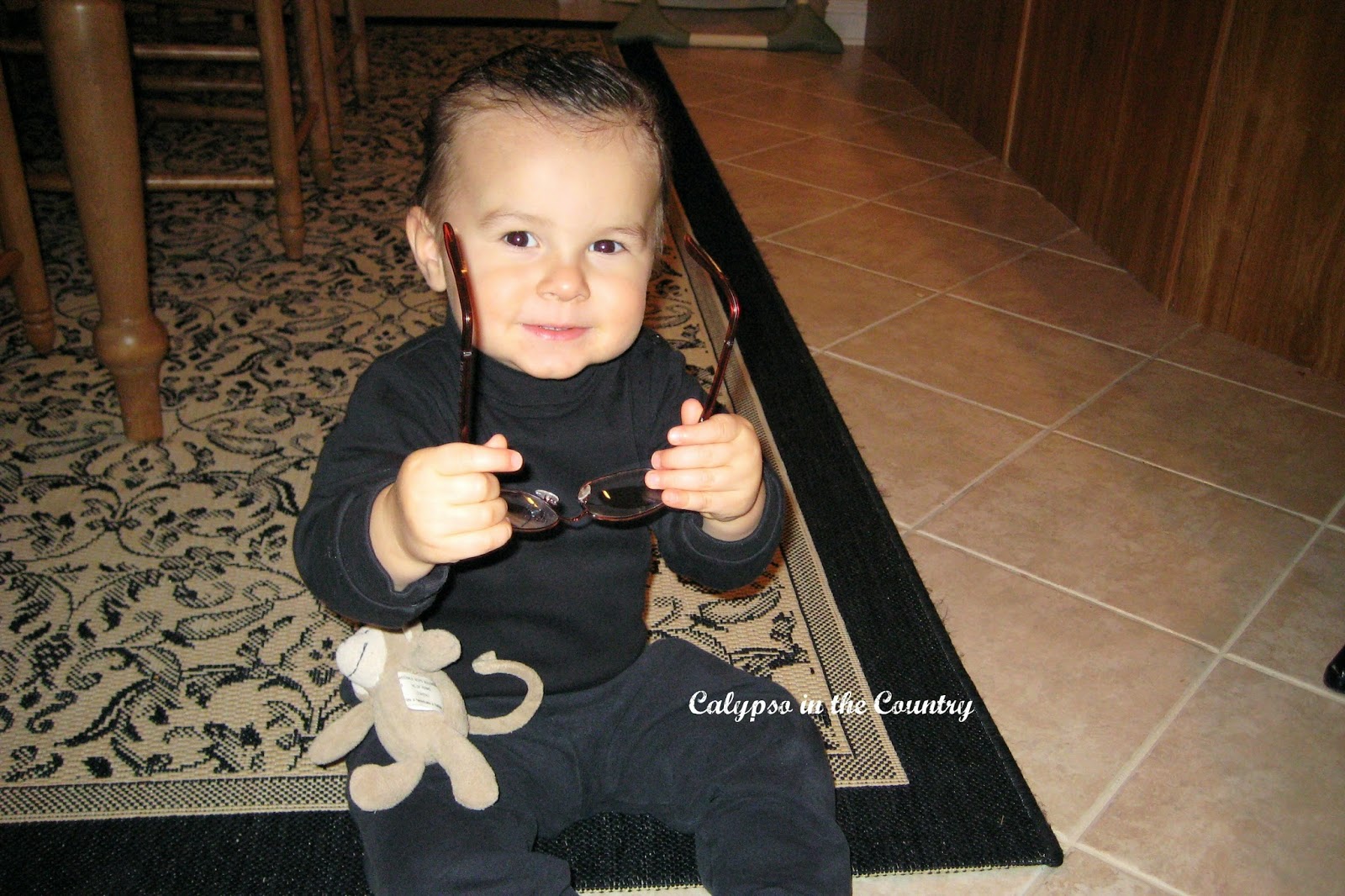 Yeah, maybe my husband is right.  Maybe I did encourage him to be the class clown…

Well, I am proud to say (or embarrassed to admit) that my little one has now perfected the Dieter character with the dance moves, German accent and facial expressions to go along with it!  (He has only seen the one video because some of the Dieter material is a bit inappropriate for a child!)  I literally cry laughing when he does his Dieter dance!  If I can ever convince him to allow me to record him, I promise to share the video with you.  You will die laughing…

This is the kind of silliness that goes on in my house on a regular basis.  We go back and forth with lines from movies and TV shows all the time.

Lately, my son (yes the baby above who is now almost 9!!!) has been obsessed with the show, Henry Danger on Nick.  Since I always need to know what my kids are watching, I usually sit down with him to watch each episode.  Even I think the show is hilarious!  I wish they recorded the episodes in New York instead of Los Angeles because I would love to take him to a taping or something!  Either way, the show has given us plenty of material to add to our already silly repertoire! 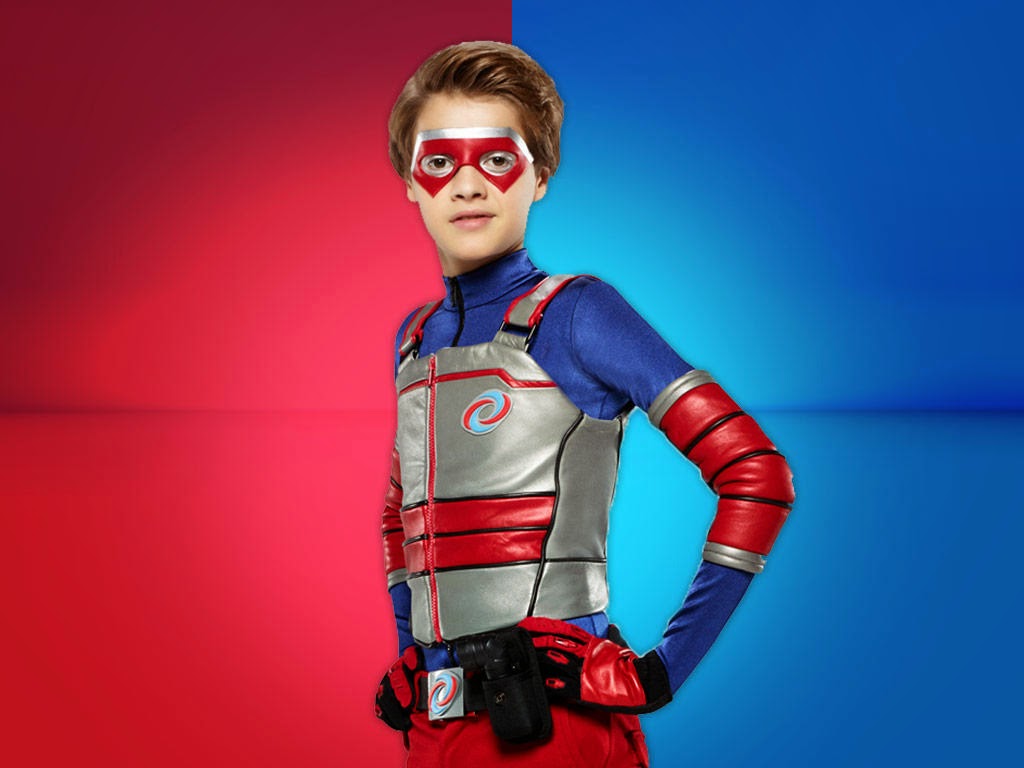 Speaking of super heros…As you might have seen on my blog, our dog, Rosie is not immune from our shenanigans! 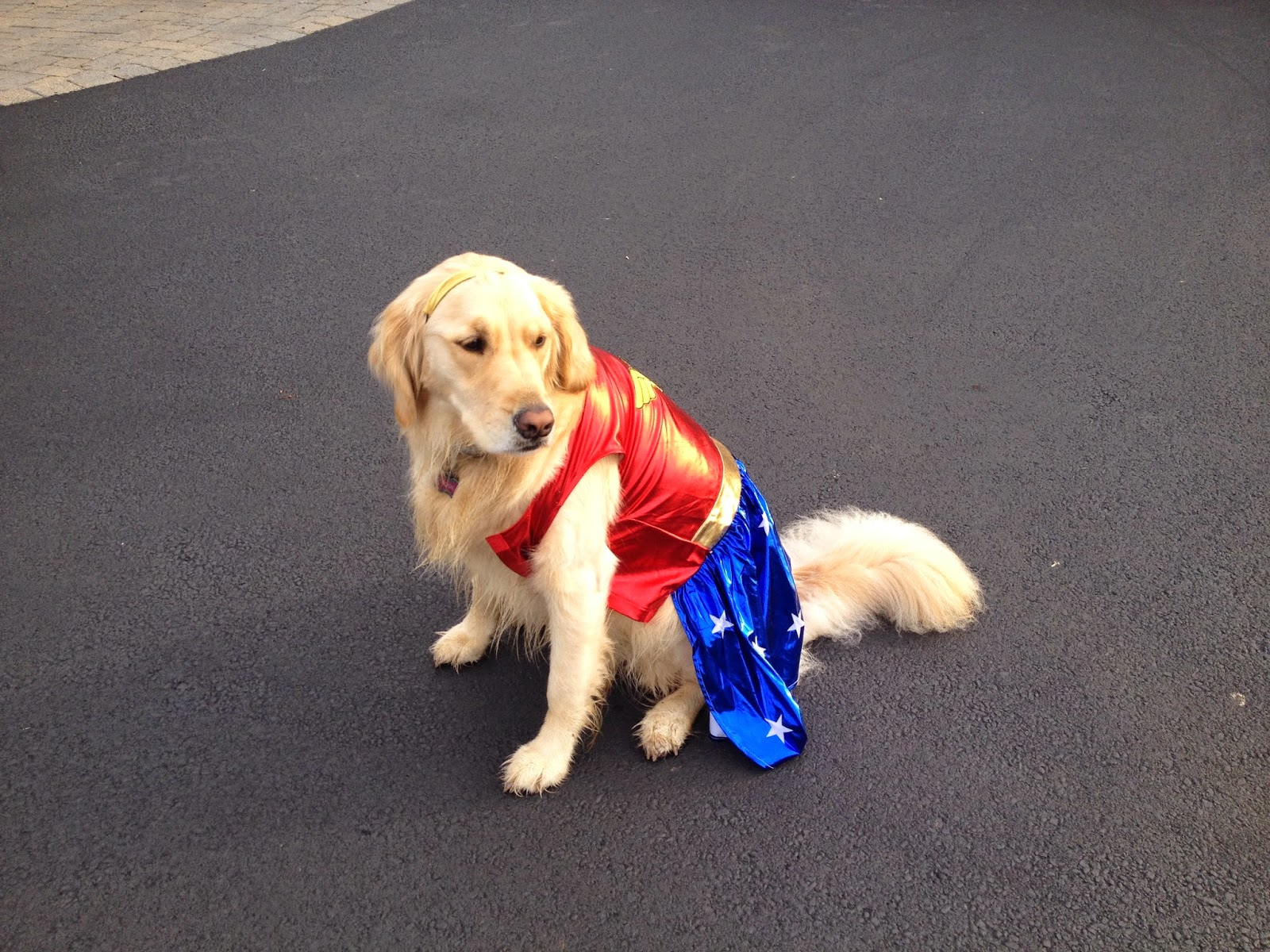 The time I tried to fit her in a too-small Wonder Woman costume!

(Could she look more annoyed?)

I think I inherited some of my silliness from my uncle.  He used to encourage my sister and I to do mischievous things like put a cup of water at the top of a door so it would fall on someone when they walked through.  I am sure my mom was not happy with our crazy antics.  She is the more serious one…in fact, she never could understand the Far Side cartoons.  I always had to explain them to her and she still wouldn’t laugh!  But I have to give her credit for being a Seinfeld fan!  A sign of a true sense of humor as far as I am concerned! 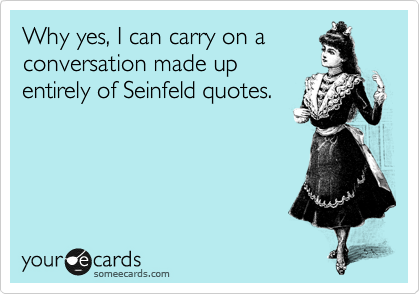 Besides seeing every single episode of Seinfeld (multiple times!), I was exposed to Saturday Night Live at an early age (my uncle’s influence again).  No wonder I had such an early appreciation for those ridiculous characters like the ones played by Bill Murray.  The man can do no wrong.  Not only is he absolutely hilarious, but he is a brilliant actor as well.  He has also been known to crash parties.  In fact, figuring out a way to have Bill Murray crash a party at my house is on my bucket list!  You hear that Bill?!!  I am waiting for ya!

I also love David Spade!  How much fun would it be to hang out with him?  Such a crack up.  Loved him on Saturday Night Live, Rules of Engagement, Tommy Boy (loved Chris Farley too!).  Actually all of those Saturday Night Live alumni are hilarious!

In addition to the movies, TV and my crazy uncle, I think my sense of humor has been influenced by my friends.  There are always those few people who cause you to keel over laughing every time you see them. 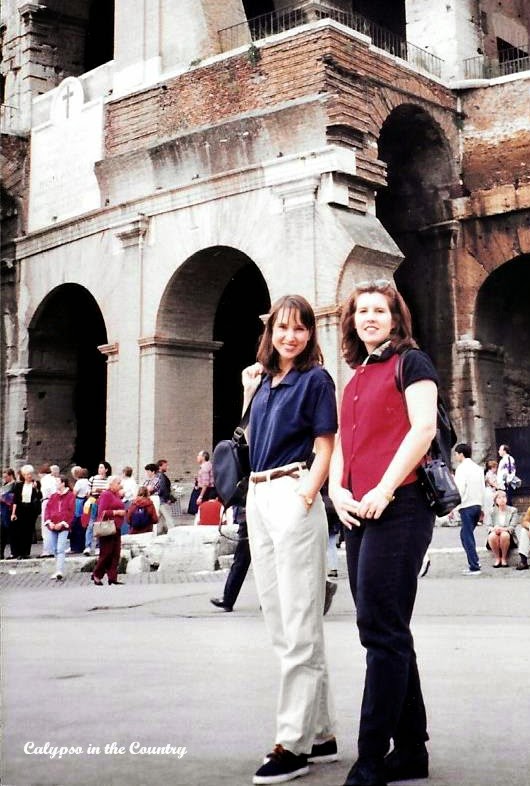 I have been friends with this crazy girl since 4th grade and you can pretty much guarantee there will be some kind of ridiculousness going on if she is around!  Usually when we get together, there is trouble – not anything bad, just a good story to tell later on.  I am laughing right now as I recall the predicaments we have gotten ourselves into over the years…definitely some ideas for some future blog posts…with her permission of course!  Anyway, I am sure you have some of those friendships in your life.  Cherish them! 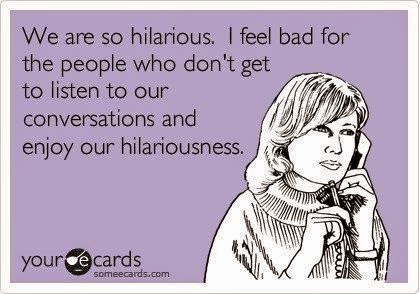 And last but not least, I must mention my husband.  Although, he may not have been a major influence in the development of my sense of humor since I met him as an adult, he does make me laugh on a regular basis.  He has been known to play some practical jokes on me over the years as well – (The Frankenbike Story)  He also is careful to keep his eye rolling to a minimum when I go overboard embellishing a story or retelling a tale he has heard a hundred times! 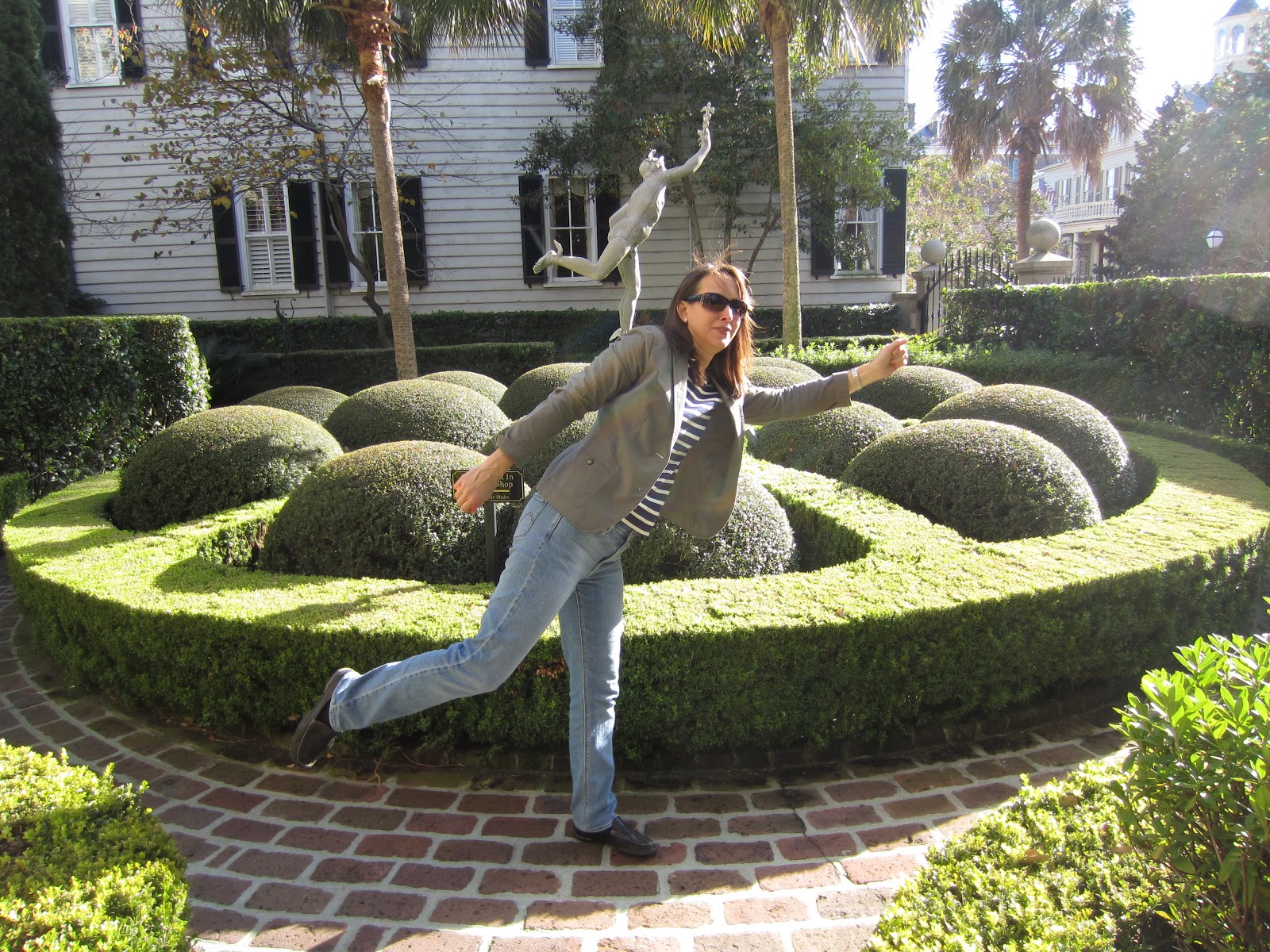 One must always pose with statues… 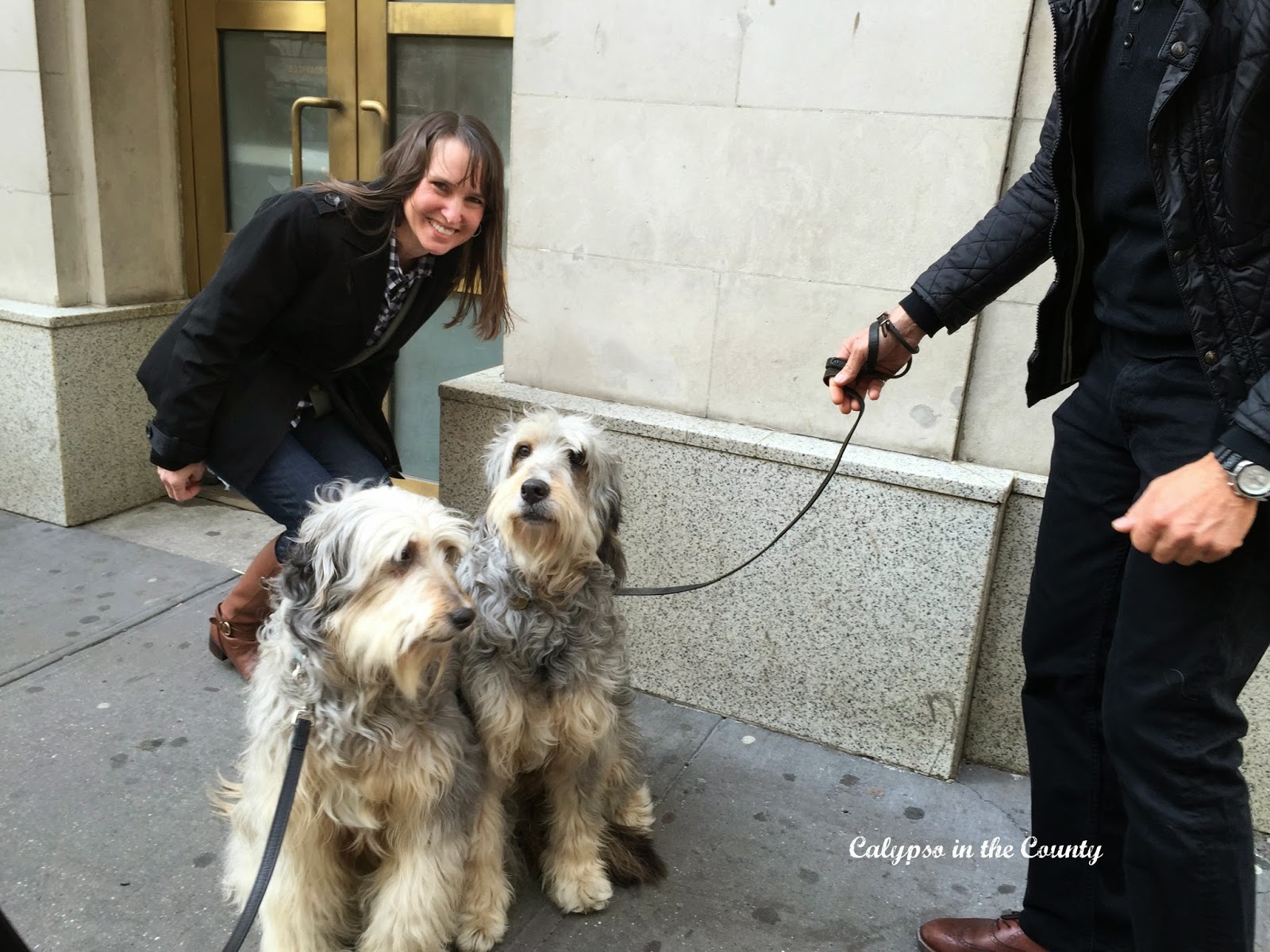 (Except when you are in Germany and follow one into a pub kitchen to pet it and it bites you.  You then have your German friend write you a note to the owner the next day to ask if the dog has had rabies shots.  You then are not sure if you got the correct answer so you worry for about a year…good times.)

Where did you get your sense of humor from?

What are some things that make you laugh?

I need to break away from all my kitchen planning and get moving on some organization in my office! I am in the midst of working on a school event for March and the piles have started everywhere! Sure, I might have storage baskets And believe me, these baskets have helped so much with everyday…

Hello October 2021 and welcome to the Saturday Spotlight!  Yes, I know it’s no longer Saturday but I just returned from a long weekend of college tours throughout the Boston area.  Of course, I was hoping to be there during peak fall foliage season but the leaves were just starting to change.  Oh well…I guess…

If you’re planning a trip to Los Angeles, you’ll see that there are plenty of attractions for families.  During our long weekend, we visited as many as we could. Today, I’ll share Days 3 and 4 of our trip.. *For your convenience, please note that this post may contain affiliate links.  If you make a purchase…

Don’t you just love those tried and true family recipes?  Years ago, my sister in-law was kind enough make me a book from her collection of family recipes. Occasionally, I like to include some of those recipes here on the blog.  That way, you can enjoy them too.  Today, I’m sharing one that’s always a…

We finally decided as a family last night that we are getting a dog! Our dog of choice:  A Golden Retriever! My kids spent most of the summer with my in-laws’ Golden Retriever and have been wanting one of their own for several years. For years, my husband has complained about the hair all over….