It all started with a bug… 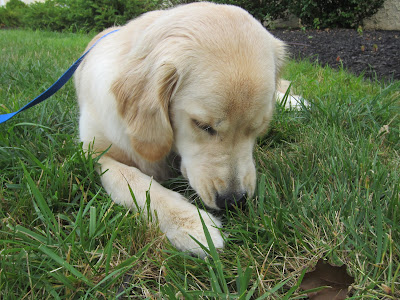 In fact, my little Rosebud should have been named “Rose-Bug” because of her obsession with the darn things. 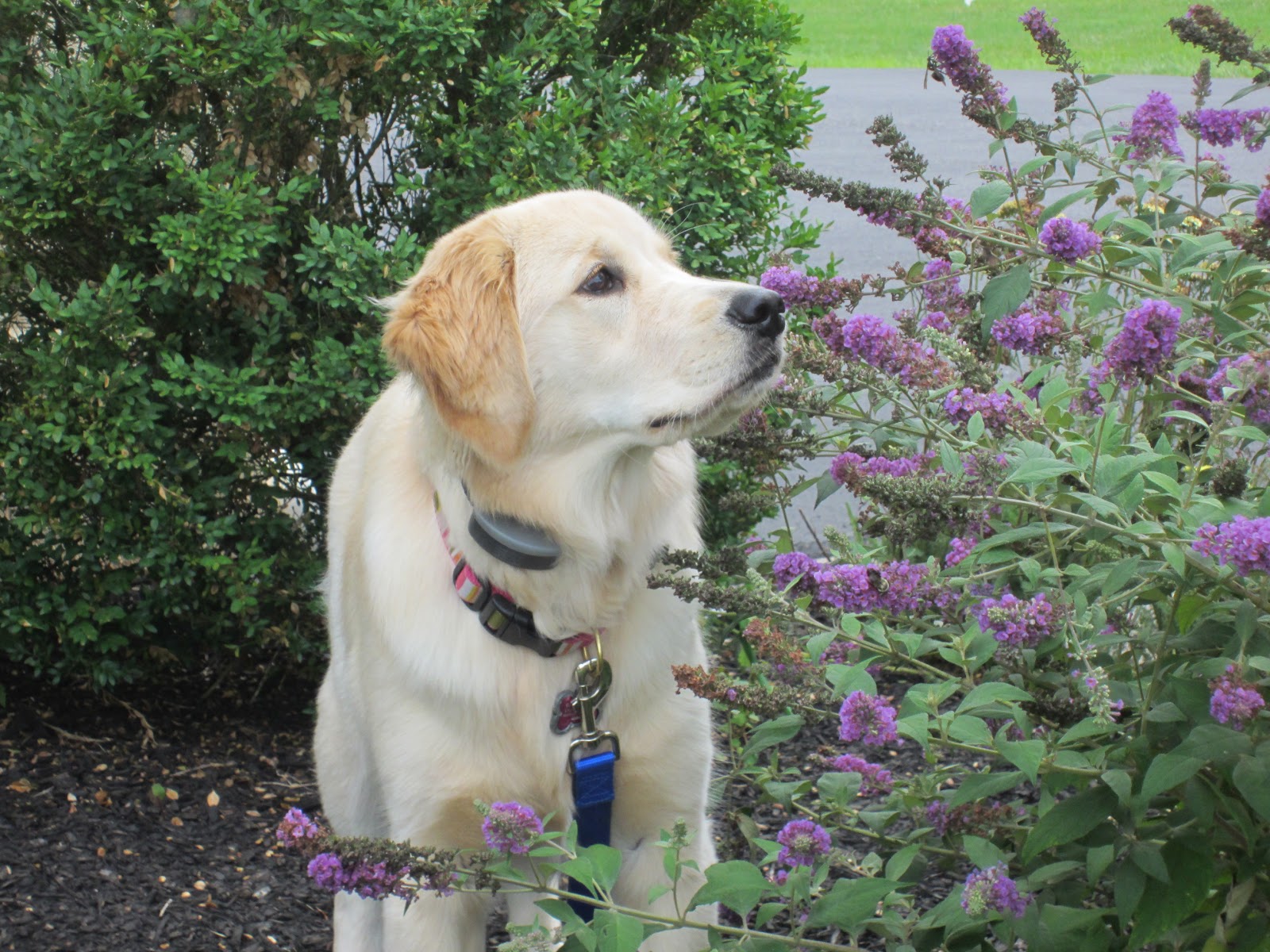 She loves to spend her outside time scanning for bugs in the butterfly bush. 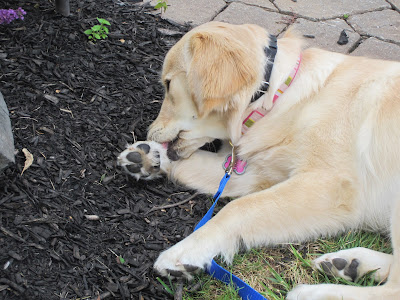 At one point, I think one of the bees stung her because all of a sudden she started tending to her paw.

But that didn’t stop her. 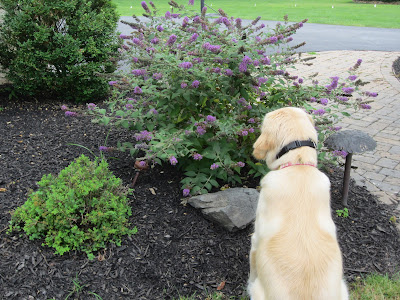 Before long, she was looking for butterflies and bees again! 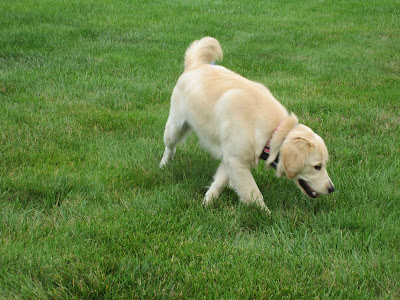 Besides rummaging through the landscaping, she also loves looking for bugs in the yard. 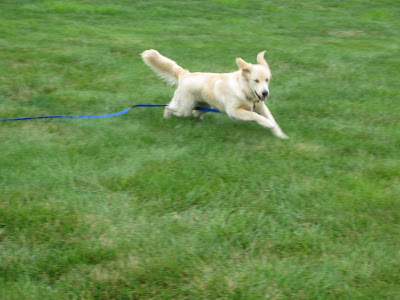 Look at that fool running around!
Now that she has the invisible fence, I can let the leash go.  Though, I haven’t taken her completely off-leash yet…but we are getting there. 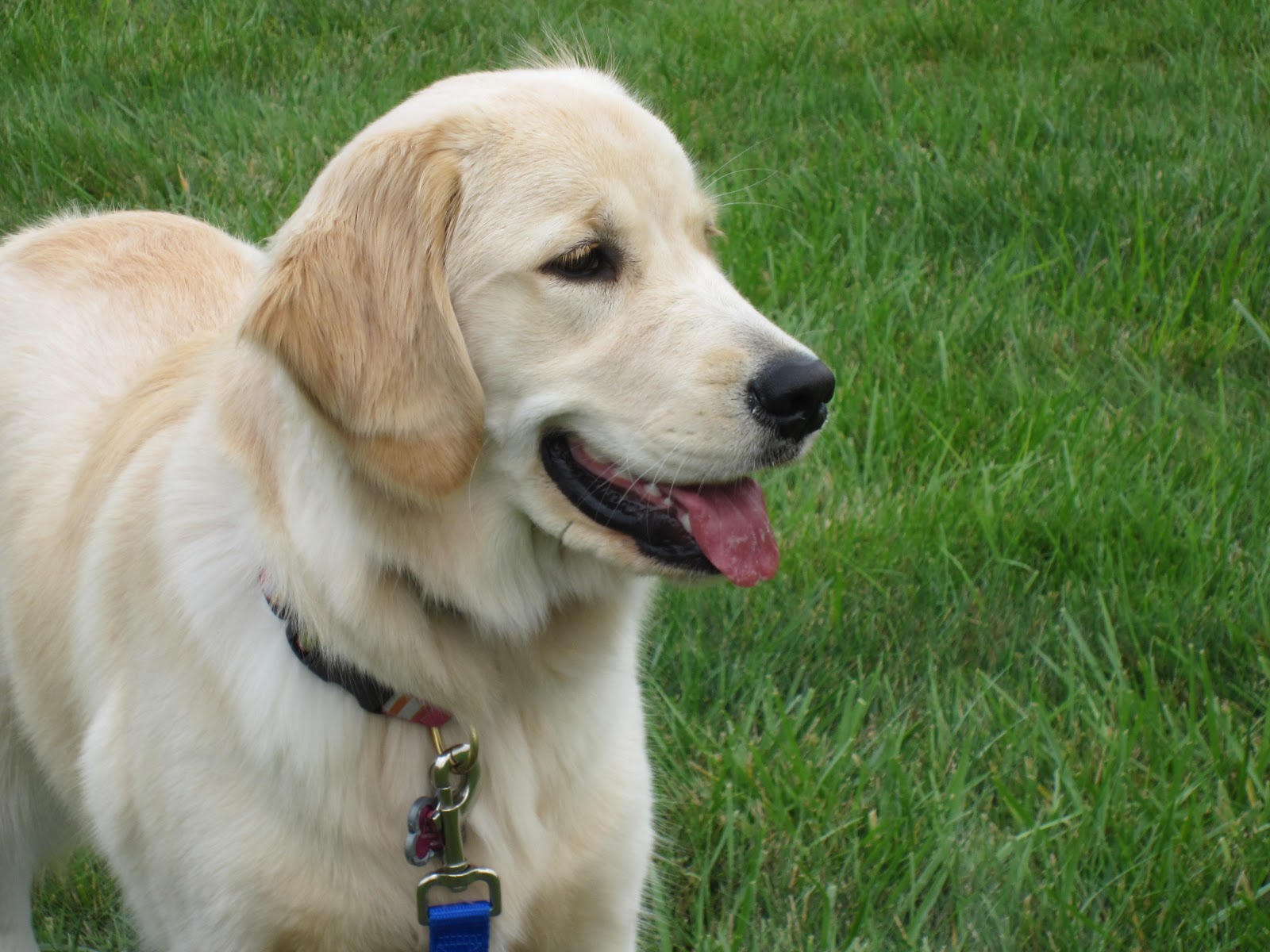 But this week, things went too far!

On Tuesday Rosie brought one of her bugs in the house to play.  Then the kids and I left for about an hour.  While we were out, Rosie made a bit of a mess.

She ripped up the corner of the carpet in “her” room (the former playroom and my future office).  Before we left, she had been playing with the bug in that exact spot.  From what I assume, the bug got away and she did everything she could to capture it.

Of course we scolded her when we got home and she acted guilty.  She knew exactly what she did wrong…so I thought.

Then the next day, she went back to that spot to pick at it a little.  She couldn’t help herself. But after some more scolding
she seemed to lose interest.

So, the rest of the week I tried to keep her as busy as possible.

On Thursday, I thought I really tired her out.  We ran around outside for quite a while, catching bugs and leaping in the air.
(actually only Rosie was doing the catching and leaping – LOL).

Surely, this amount of exercise would wear her out and use up any destructive energy she might have.  By the time I went up for bed that night, she was passed out on the floor in the kitchen.

But it must have been the calm before the storm because sometime after midnight all hell broke loose!

My husband had been traveling all week (and missed the earlier disasters). His flight had been delayed so he didn’t walk into the house until 2 am to find this… 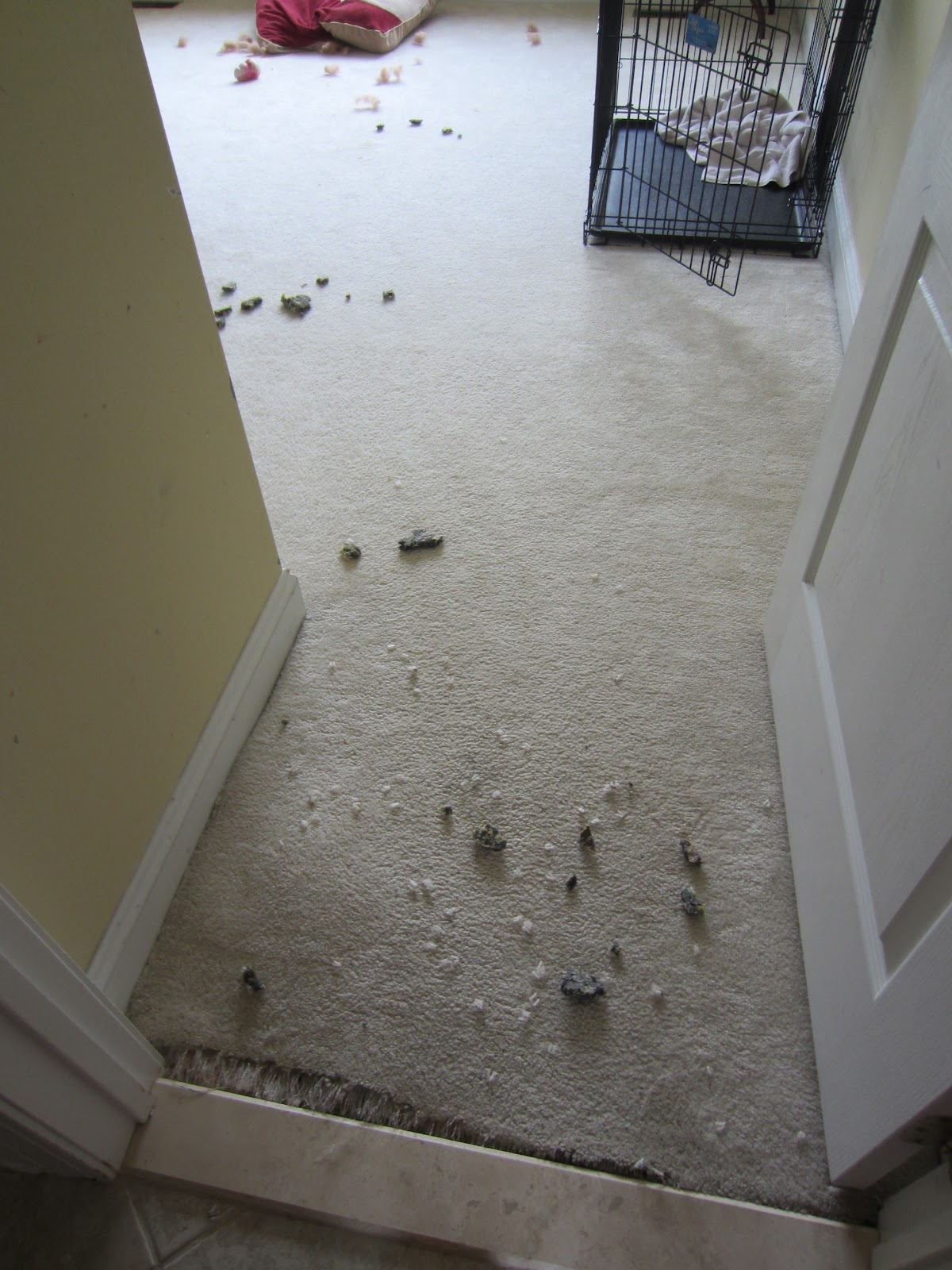 Obviously, the picture was taken the next morning…He would have thought I was insane if I took out my camera during the yell-fest!

Yes, those dark things are pieces of the rug pad. 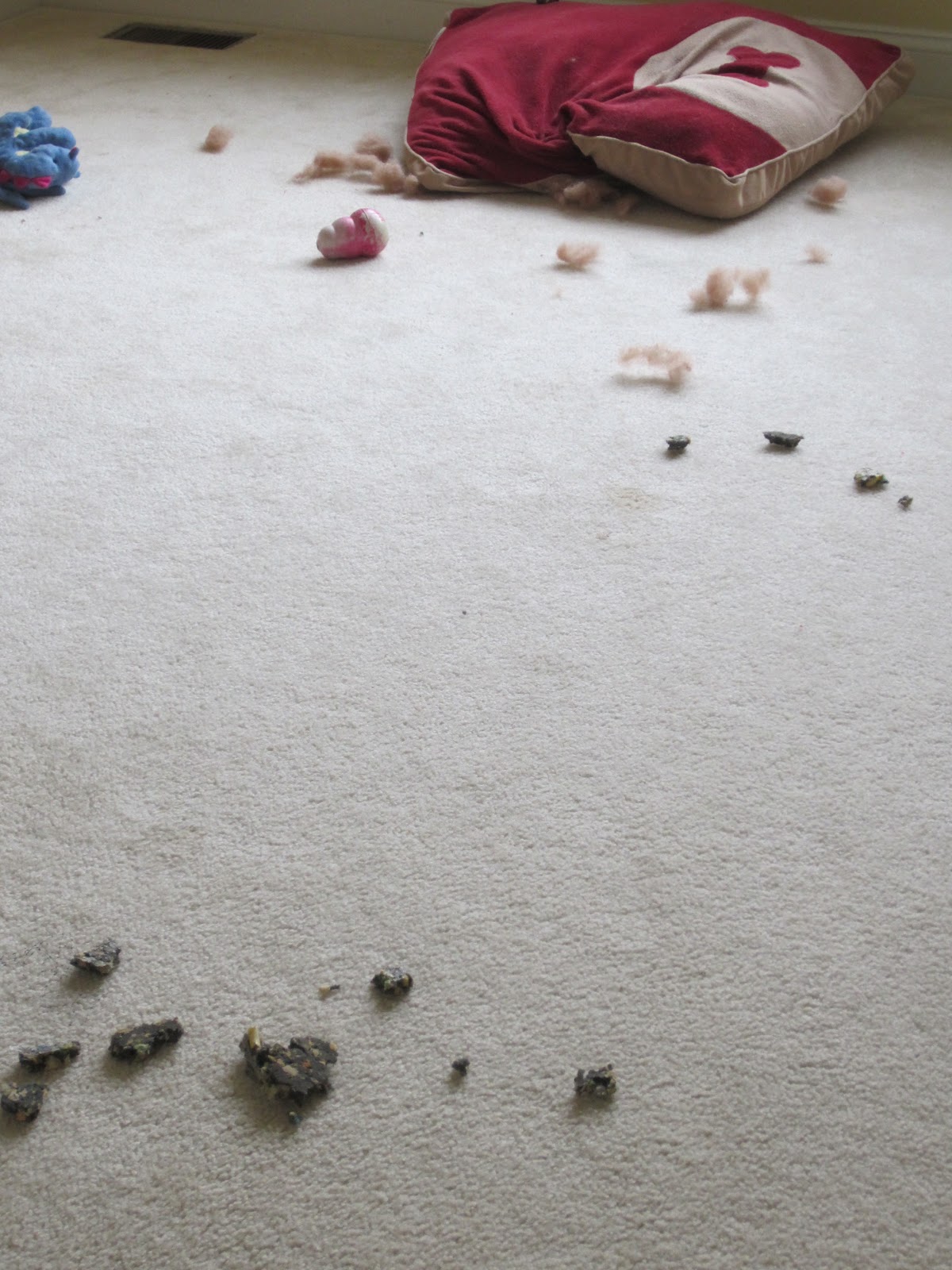 As you can see, during this rampage Rosie also ripped up her bed for some reason.

Why not just destroy everything in sight!

I seriously do not know what got into her! 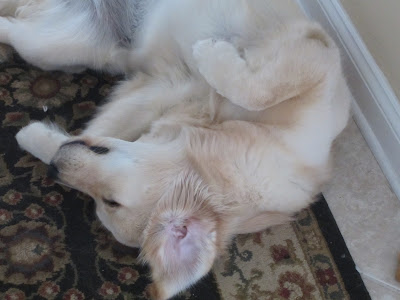 But the good news is that it looks like I will be getting hardwood floors in that room sooner than expected!

For now we are just keeping the door shut!  She doesn’t use her crate anymore anyway…although maybe she should!

Now I am worried that she will destroy something else in the house.

And I am sorry to say, the week ended with a bug too…a stomach flu bug!

My poor son was sent home from camp on Thursday and missed Friday due to a stomach bug running rampant through the camp. Now I am walking on eggshells waiting for the bug to start spreading through our house…

Any “bugs” in your house this week?

A few months ago I mentioned that The Travel Channel show, Hotel Impossible filmed a makeover on a beach playground in Seaside Park, NJ. My kids and I were there for the filming of the reveal… and it looks like the episode is airing tonight! Part One of this Hurricane Sandy Relief special, (shown last week)…

Recently, I caught a cold from my husband and spent most of the past week resting to get better.  For some reason, my version of the cold ended up much worse than his and I was pretty much useless.  Just in case, I went to the doctor on Wednesday to get a strep test.  Luckily,…

We are making some progress in my office renovation…. The hardwood floor and crown molding is installed  and the room is painted! I mentioned this room was once an office when we first moved in.  It was never fully decorated.  I had a desk and bookcase from Bombay Company and the walls were still builder…

April is here and I am sure many of you have spring trips planned.  Unfortunately, we don’t have any travel to look forward to this spring.  Since my boys are involved in spring sports, we have practices scheduled that week…so no vacation for us!  Oh well… At least we took advantage of that time off…

I am always checking out furniture when I go on vacation and I try to recreate the look in my home. I love the coastal look of this chair. This particular one was at a hotel restaurant in Turks and Caicos, but Stanley Furniture has some similar ones which LOVE! Here are some great island looking…

Happy weekend and welcome to the Saturday Spotlight!  Each week, I focus on a different theme or topic to inspire you.  As we get closer to summer, we’re beginning to think about summer entertaining.  Now, is the time to start planning your Memorial Day decoration ideas for your barbecue or family get together.  Here are some festive…