At the beginning of January, I publicly declared

that I would keep our house temperature a little cooler

than our usual balmy 71 degrees. 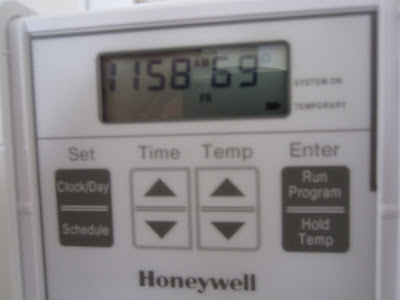 Anyway, for the month of January we tried  keeping the thermostat at 69 degrees.  I know, wow…big deal, two degrees.  Well two degrees is a big deal for someone like me who is always chilly.  I think on a few occasions I even allowed the thermostat to be turned all the way down to 68!  Anyway, I have yet to hear the report from my husband on the difference (if any) in the heating bill but I am happy to say, I survived the chilly temperatures!  I have noticed I wear socks more than I used to though – so I guess I am saving money right there on not having to get pedicures in the winter to keep my feet looking cute – LOL!  I am like a money saving machine!

The funny thing is, I  inadvertently started cutting back in other areas as well during the month…

The kids and I had been slipping into a routine of grabbing dinner at Panera every Tuesday evening after tennis.  But ever since I have been driving our neighbor’s son with us, we have come straight home afterwards and I make dinner (or leftovers).  Cha ching…. 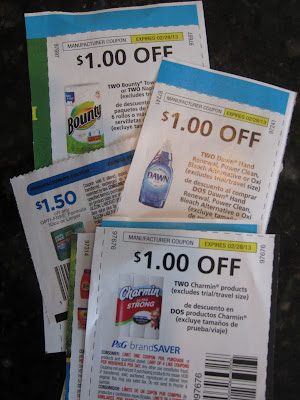 I have always clipped coupons.  Not in the crazy obsessive way you see on TV…I just cut what I normally use.  Well, now instead of cutting them and leaving them home on the kitchen counter and realizing this after I have arrived at the store, I now put them directly in the side pocket of my hand bag so I can actually use them.  Cha ching…

Now I can’t take the credit for the next one, but we recently changed our land line phone from the local phone company over to the cable line.  We knew about this option awhile ago but at that time, the cable company was not letting you keep your old phone number.  Don’t ask me why, but I am quite attached to my phone number for some reason.  Then recently, my neighbor switched theirs and was able to keep their old number.  Finally we got around to it and changed ours the other day.  Now we can make long distance calls and not be charged long distance fees.  Overall the switch will definitely save us some money.  We just have to be careful because if the cable goes out, then we can’t dial 911 in case of emergency.  But we discovered during Hurricane Sandy that our local phone line was down even longer than the cable lines, so I guess it doesn’t matter – plus we always have our cell phones.  Cha ching… actually two cha chings because I think this one will add up to some legitimate savings!

So this plan to cut back on the house temperature managed to snowball into a few more money saving situations.  And speaking of temperatures, my older son has been home from school yesterday and today with a fever, sore throat, headache…Luckily his fever only hovered around 100, which I don’t think is even technically a fever but he really hasn’t felt well.  I don’t think it’s the flu though because I think he would actually have a high fever with that.  Plus I am hoping the flu shots worked.  A few weeks ago when the news was bombarding us with flu statistics, we all went out and got flu shots.  My kids got theirs 3 weeks ago and my husband and I got ours 2 weeks ago…so I am keeping my fingers crossed.  Flu season technically lasts through April and we have that Caribbean trip coming up, you know.

I hope you all have a nice weekend.  Oh, and here is a money saving tip – If you go to Macy’s today, wear RED (to support the American Heart Association) and you will get 20% off!  Cha ching again!  Or is it ka ching?  Anyway – you’re welcome!

What have you done to save money or energy recently?

Let’s face the facts…most of us aren’t traveling any time soon.  Well, who says you need to go far away to escape?  Today, I’ll give you tips to create your own vacation at home…a backyard staycation! *Please note that this post contains affiliate links.  If you make a purchase after clicking my links below, I…

In about 5 weeks we are bringing home our puppy. But every spring (except last year), we try to take a family vacation in the Caribbean. We usually go in March or April. Last time we went, my older son was just in kindergarten so it really wasn’t a big deal taking him out of…

Due to the heat earlier in the week, Rosie spent a lot of time indoors enjoying the air conditioning and cold tile floor… and her toys. She gathers them up to sleep just like my younger son does at bedtime! With the high temperatures, it was hard to be outside working on the Invisible Fence…

There are 52 weeks in a year and do you know what that means?… Today is the last official “Weekend Pupdate.” Rosie will still pop up in my posts from time to time but I think documenting her first year with us is probably enough. I mean really, how much adventure can one golden retriever…

We finally decided on a color for my son’s bedroom! After trying many samples from light grays to dark blues, we ended up choosing Amsterdam by Benjamin Moore. As you might remember, this was one of the colors in the running and this is also the color of my master bathroom. Here is how it…

My back hall closet was getting a bit out of control… The hats, scarves and gloves  were overwhelming the little baskets on the shelf. I also wasn’t properly utilizing the hanging shoe rack on the right.  The coats were looking sloppy…. and this picture was taken after I already got rid of a few!  …