Hello, all you dog people! 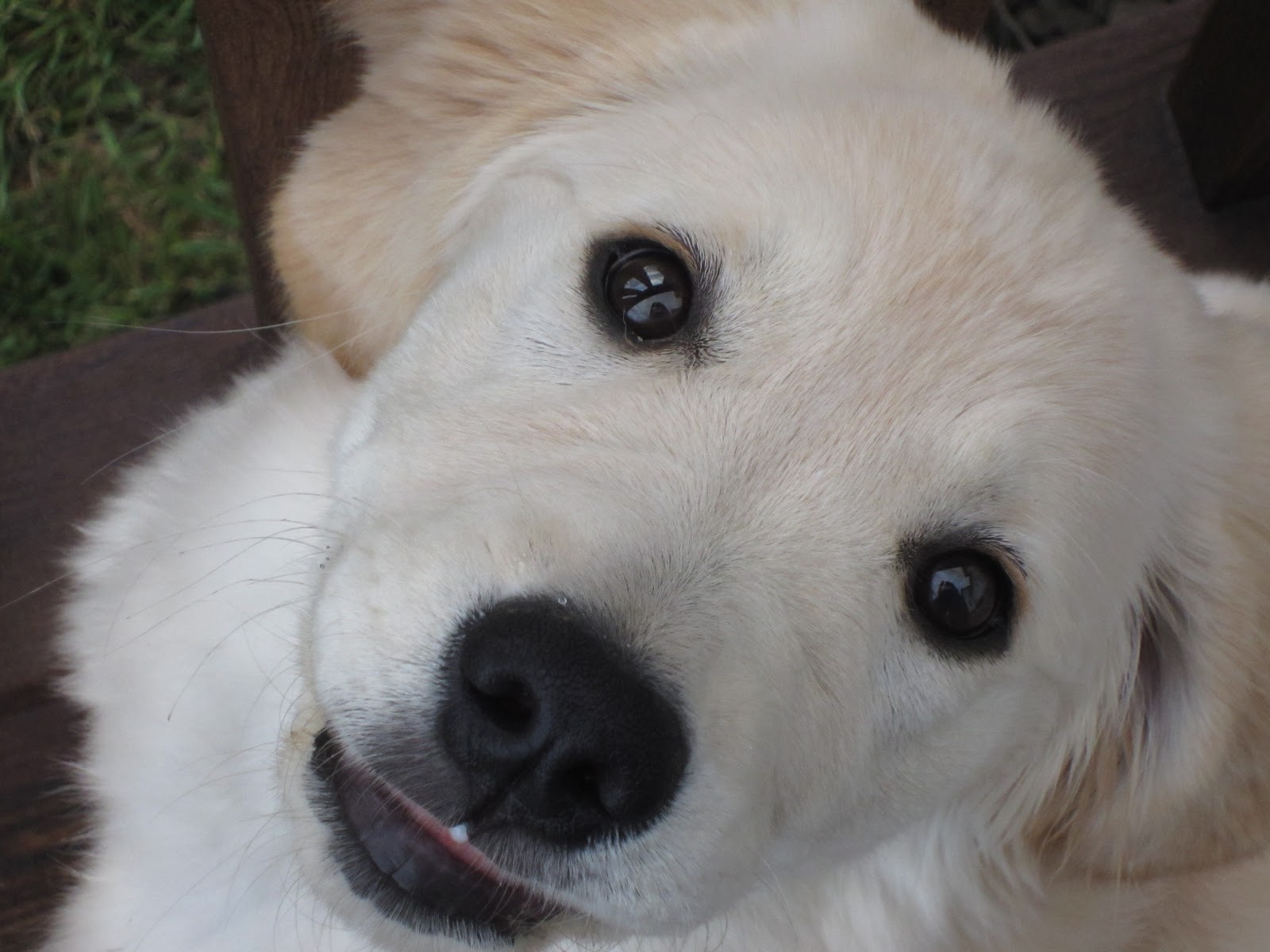 I figured if you have stopped by each week

to catch up on the Rosie update,

you must be a dog person!

This week, Rosie had a great time

watching the boys hit baseballs in the yard. 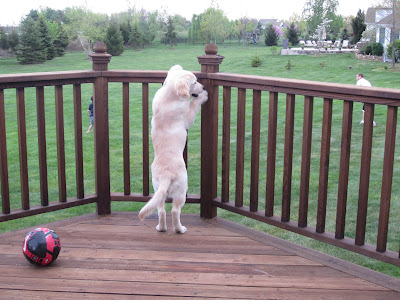 She wanted to play too. 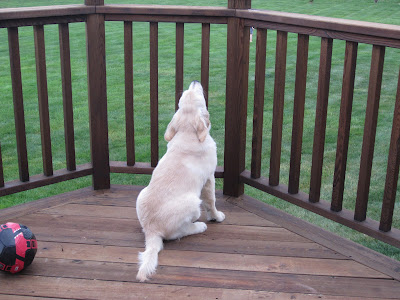 She spent most of the time barking at them. 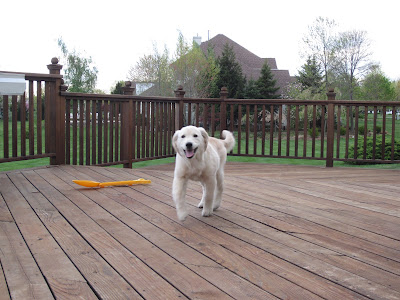 And running all over the deck. 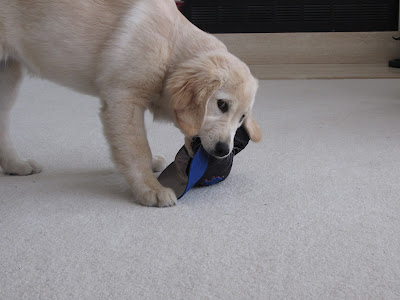 I think she liked baseball

because she stole one of their hats later.

She also helped me clean the house this week.

Well, she actually messed up the house

with her toys and hair.

I did the cleaning. 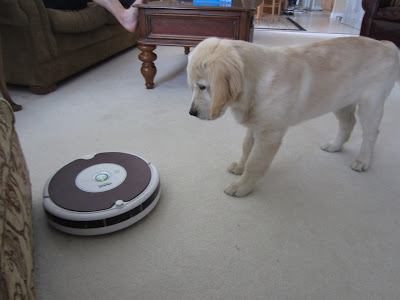 But she did enjoy following the Roomba around!

I had some returns to pack up. 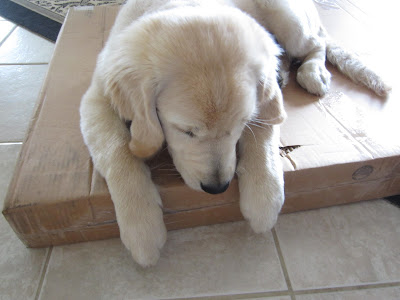 Rosie tried to help with that too! 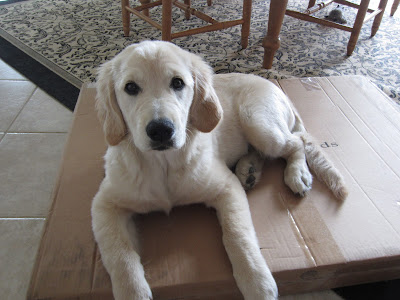 Can I come with you to UPS?

But the highlight of the week had to be

her doggie playdate with her Aunt Rosie! 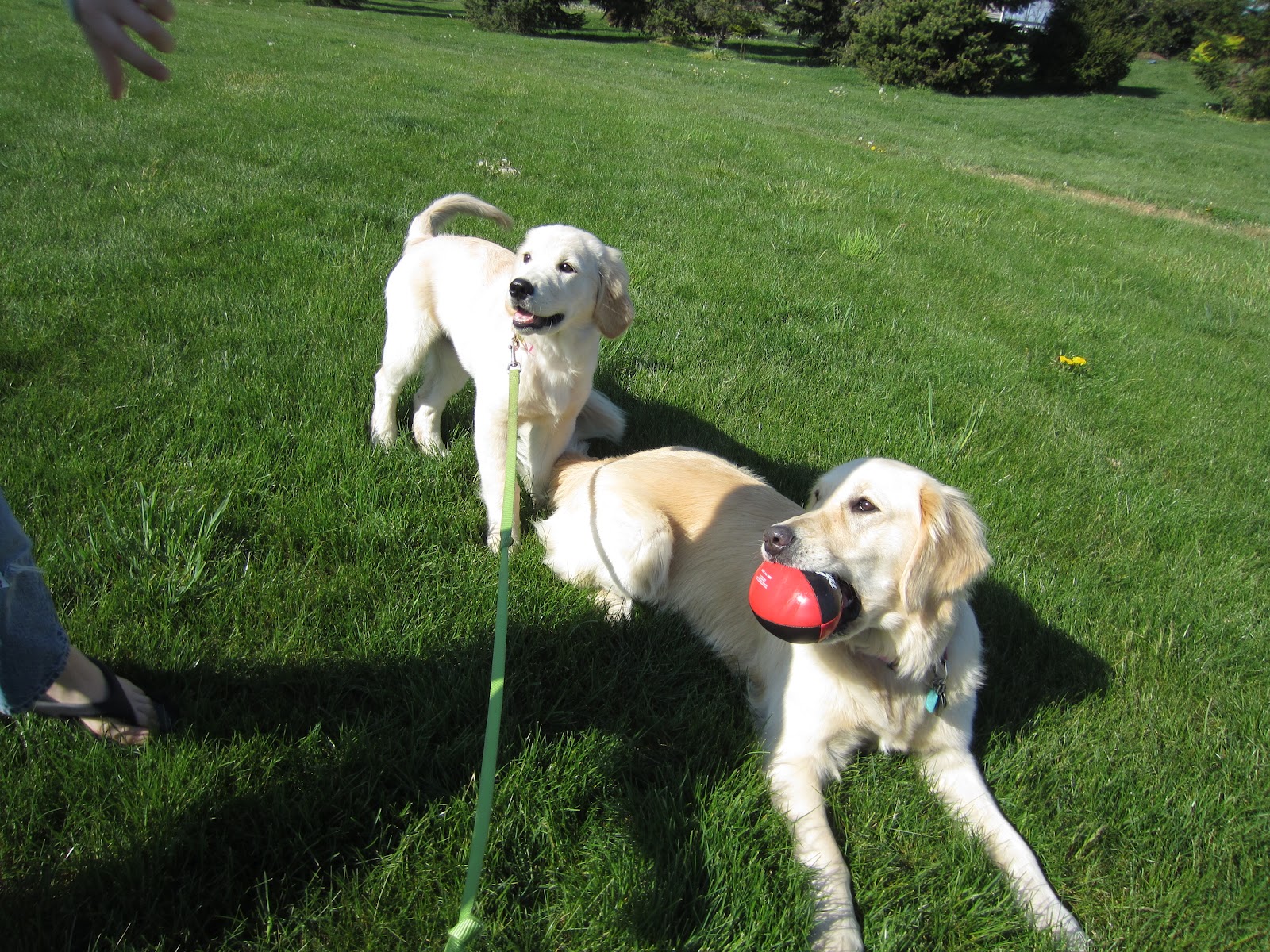 Yes, her aunt is named Rosie too.

Kind of funny isn’t it?

When my kids were naming the puppy

they wanted to call her Rosebud

after the puppy in the Air Bud movies.

and I knew we would end up calling her Rosie

But that’s just how it turned out! 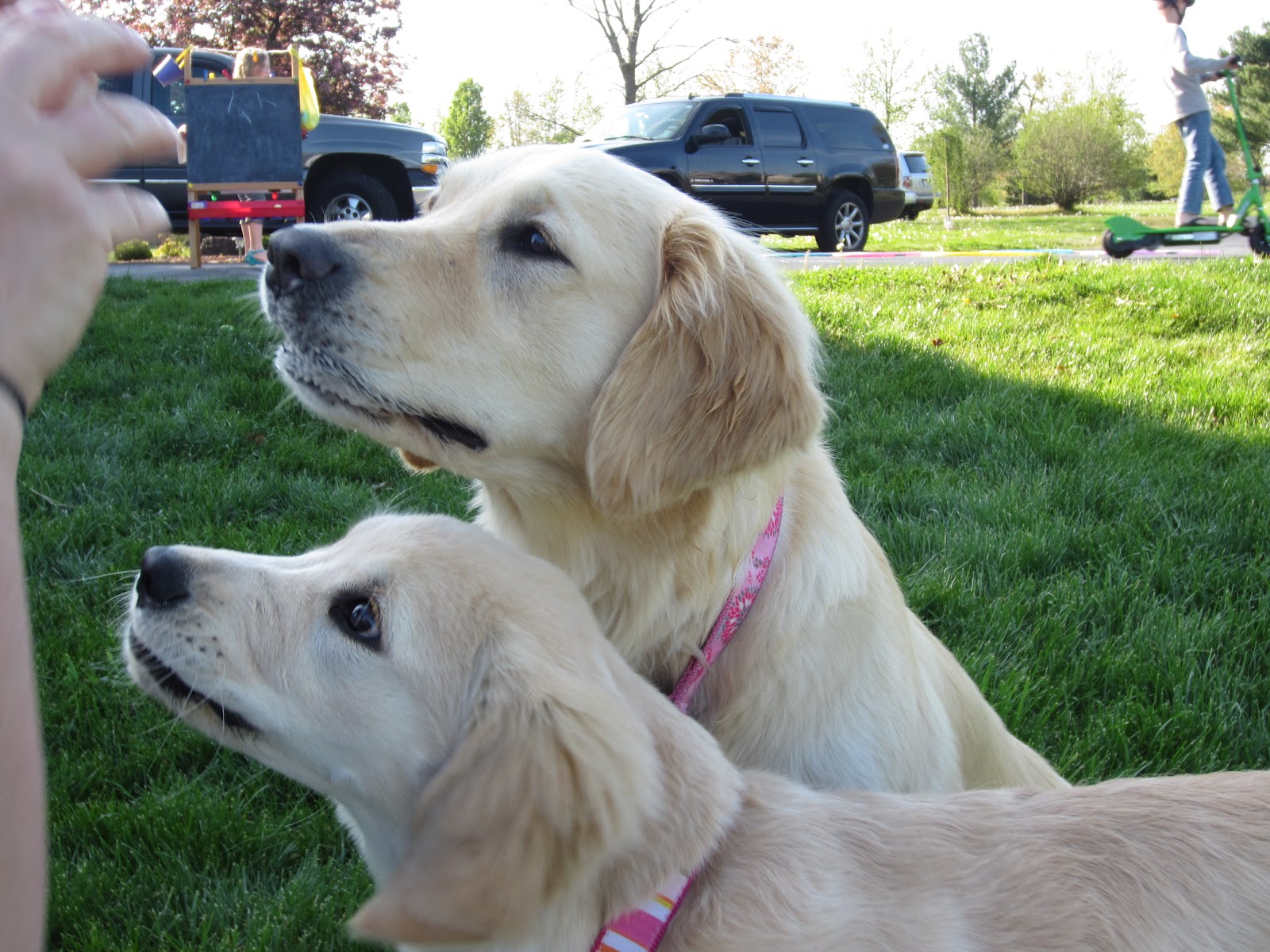 So the playdate with Big Rosie and Little Rosie went well. 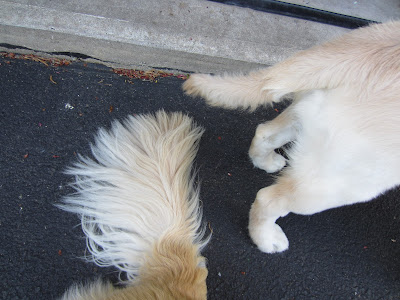 We did some tail comparing. 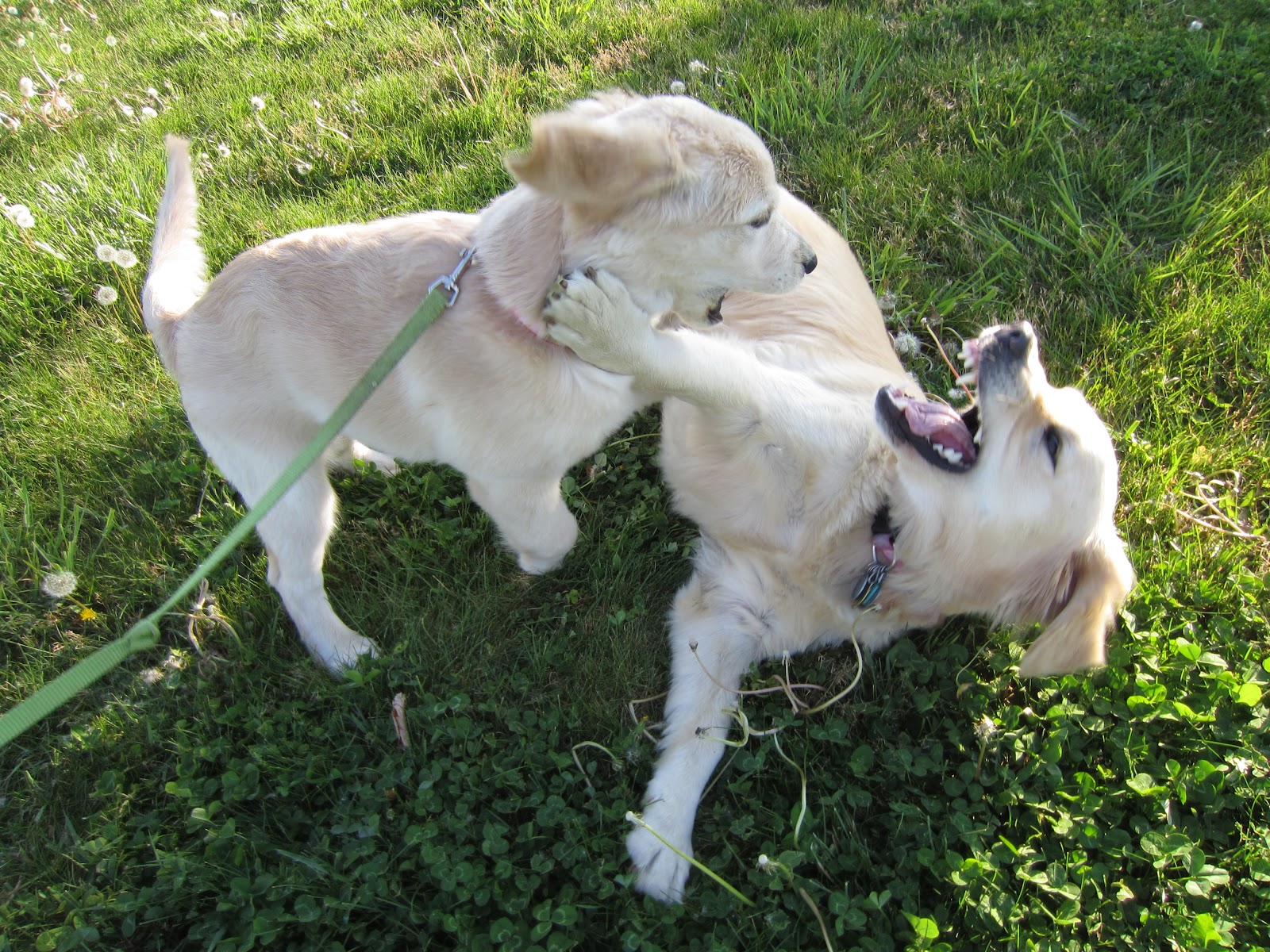 And some doggie wrestling.

Look at those faces! 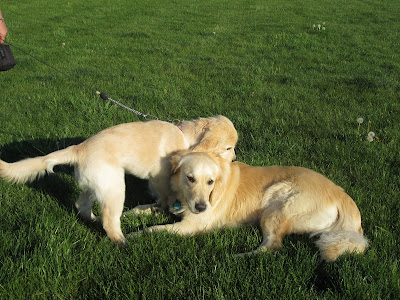 They had a great time together

and Big Rosie was very welcoming to Little Rosie!

So it was a nice week.

I am glad we spent so much time outside

because now it is supposed to rain for the next few days.

How is your weekend weather?

How is it already Wednesday?  This week is flying by isn’t it?  I guess I am going a little crazy trying to squeeze in as many chores and activities as possible before the kids are off for summer.  Luckily in New Jersey, schools don’t get out until mid-June.  Still, time is ticking by… Last week,…

Sure, for Mother’s Day I’d love a new kitchen, I nice vacation… But… What I Would Really Love for Mother’s Day is for time to stand still. At least for a little while. At this very moment in my life, things are just the way I want them to be.  Everyone is healthy, the boys…

As exhausted as I was Sunday night, I couldn’t miss the Golden Globes!  And I couldn’t have been more thrilled to witness the movie, “Boyhood” winning the Best Drama – Motion Picture!   As I am sure you heard, it also won for Best Director – Richard Linklater and Best Supporting Actress – Patricia Arquette!…

Like most of you, I shop online all the time.  Usually, websites are easy to navigate and I am happy with my overall shopping experience.  But sometimes shopping online can be frustrating.  Here are a few of my suggestions for any retailer who would like to listen… Dear Online Retailers, For the most part, you…

When I started making a list of projects I would like to accomplish in 2013, I took a look back over my favorite projects in 2012. Here are a few… At the beginning of the year, we installed a beadboard ceiling in my laundry room. I still smile every time I go in there! Beadboard Ceiling And…

Like many of you, I’m always looking for ways to simplify and organize my home…especially in the new year.  As I’ve been working in my kitchen, it occurred to me that I have a few favorite kitchen items that make my life easier.  Since these products work for our family and the way we live,…