As I mentioned in yesterday’s Weekend Pupdate, the kids and I built a boat this weekend. 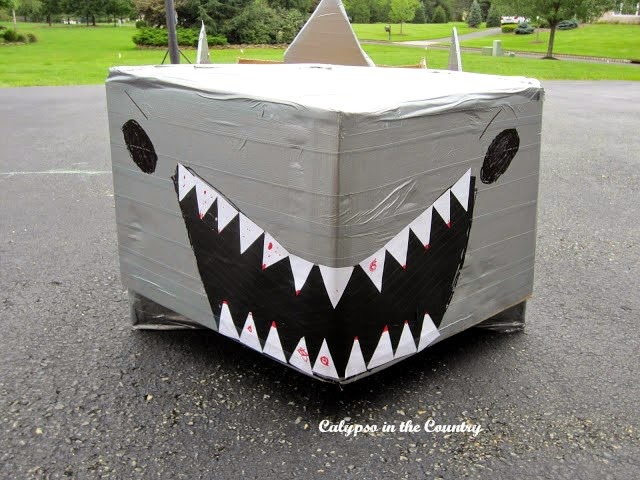 But not just any boat…a shark boat!

We signed up to race in a cardboard boat race at our pool and spent part of Saturday and all day Sunday putting it together. 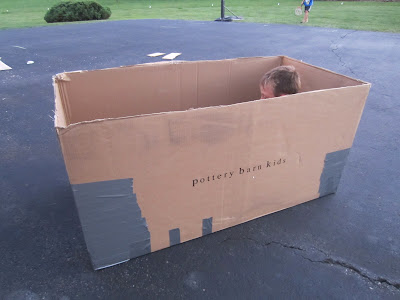 At first, we really didn’t have much of a plan.  We had a large Pottery Barn box from my son’s recent desk delivery.

On Saturday we removed the staples from the corners (staples were not allowed in the race) and we taped up the bottom.  Our first plan was to make a train, then we decided to make a rowboat, then we thought a shark would be the best idea.  (We are a real decisive family!) 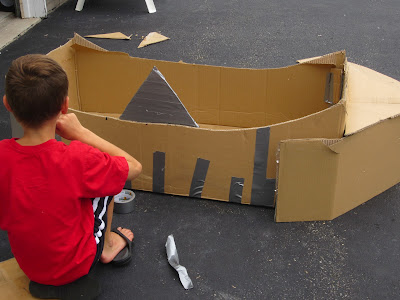 As you can see here, we already cut the boat to make a rowboat so we had to add the fins on.

The front part was an add on too. 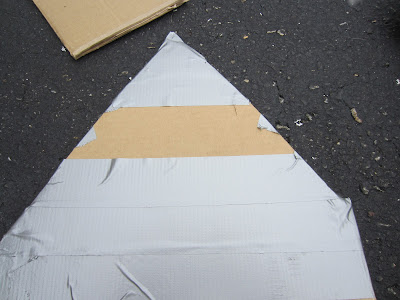 We spent all day Sunday taping and taping…

We could use duct tape or clear packing tape.  We used both – and lots of it, especially on the bottom! 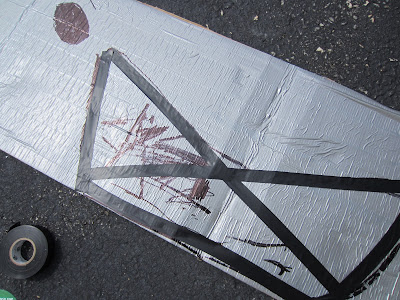 While I taped, my son started coloring in the mouth with a Sharpie.

We weren’t happy with the results so we found some electrical tape in the garage  and made the mouth with that.

Already, it was starting to look better. 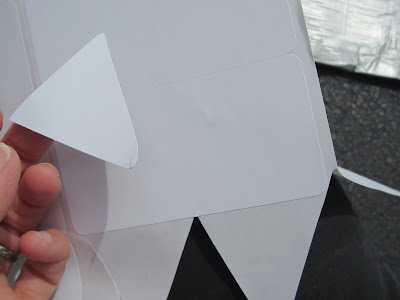 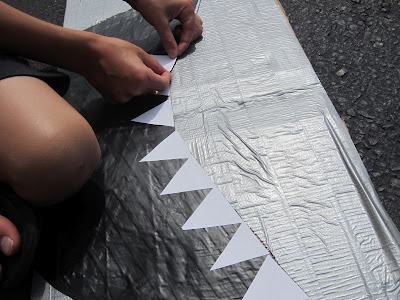 And my son added them on. 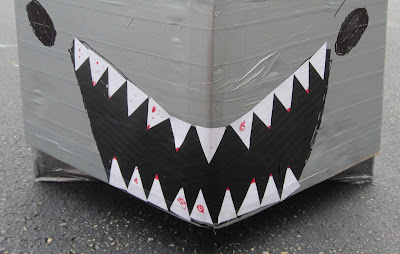 Both kids enjoyed adding the “blood”to the teeth! 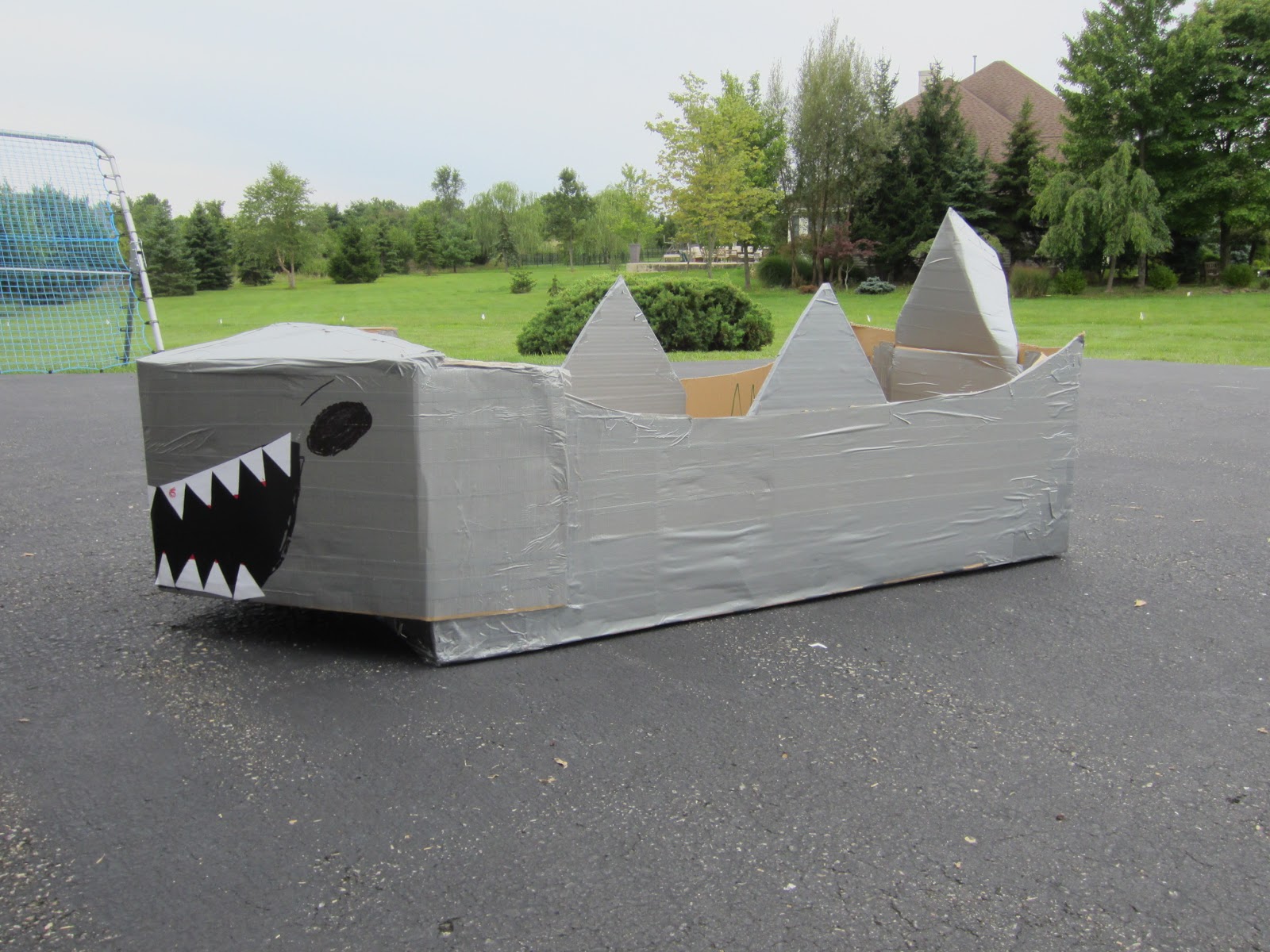 Then it was time to load the shark in the car for the big race!

The question was…”Will this thing float?”

I had my doubts and my husband was sure it would sink! 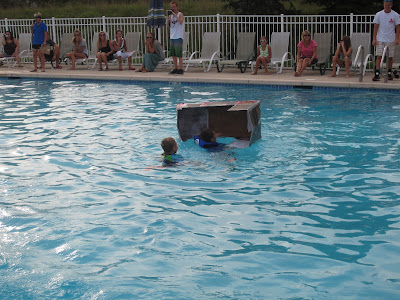 In fact some of the boats did sink…or flip! 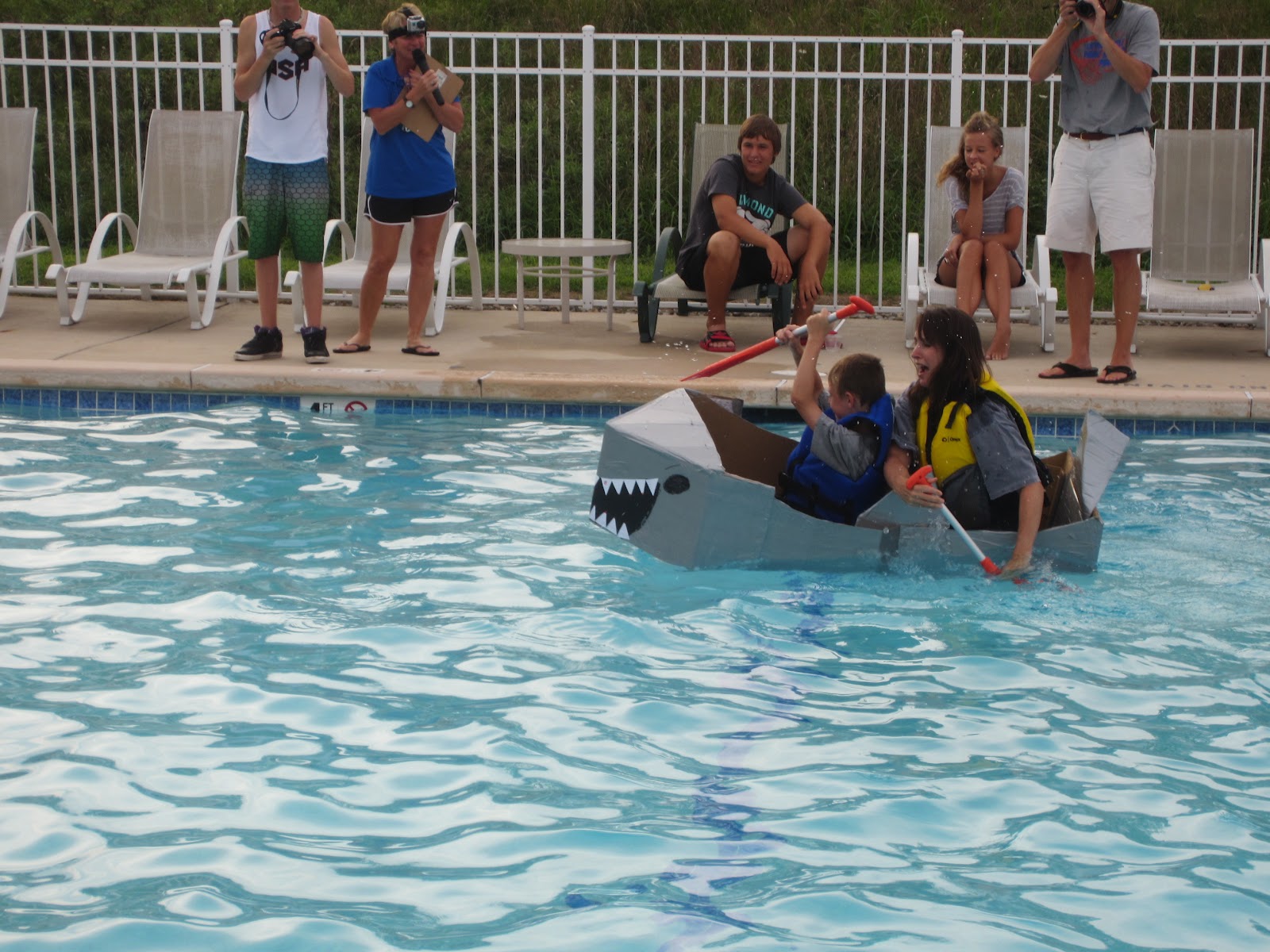 But we didn’t let that scare us!  We could only race two boats at a time, (because there weren’t enough paddles or life vests) and almost right away our competition flipped over.

So at that point, we were just trying to get a good time on the stopwatch.

We were laughing hysterically as we paddled along. 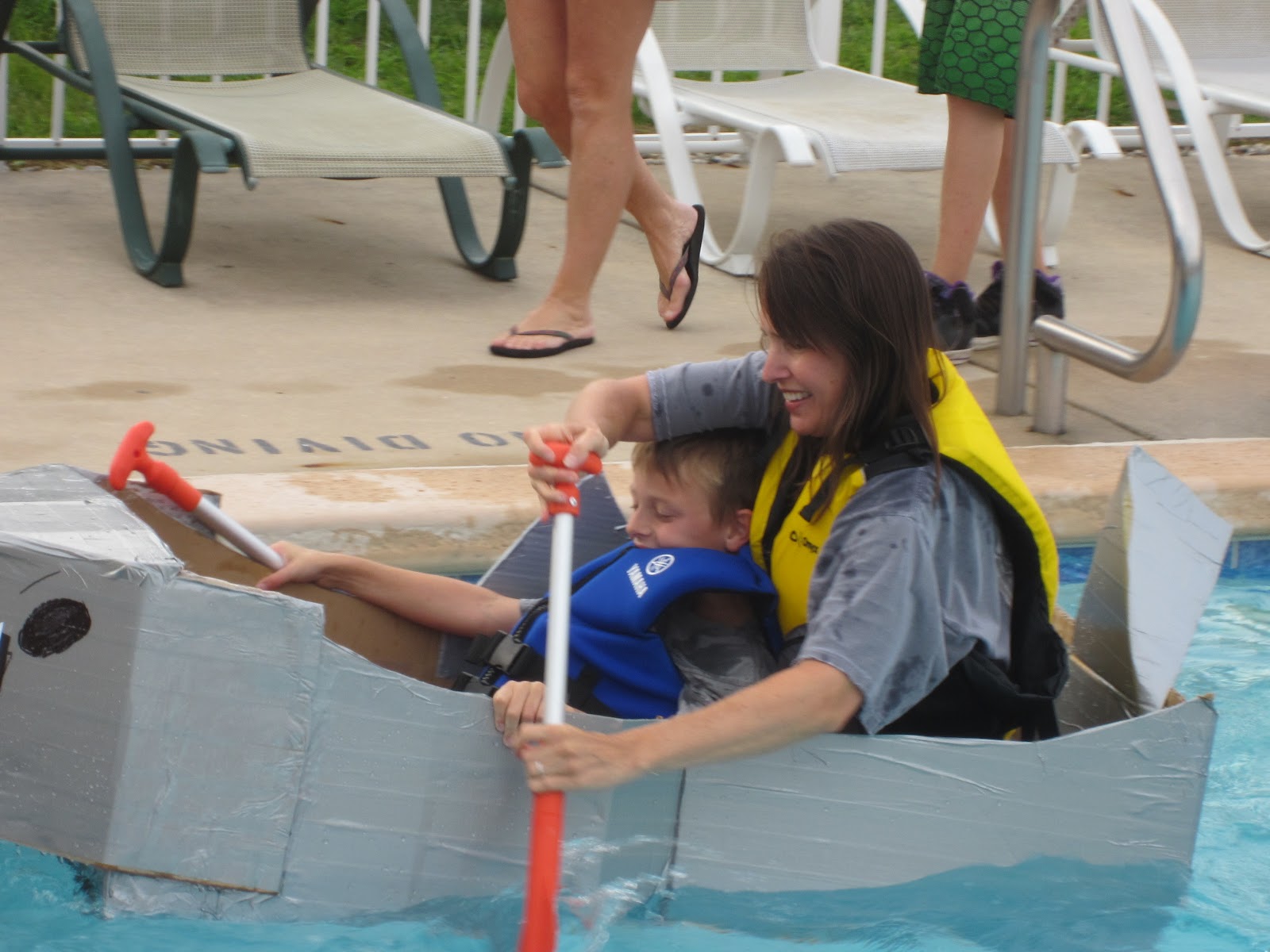 Near the end, I was starting to get wet but we made it across the pool! 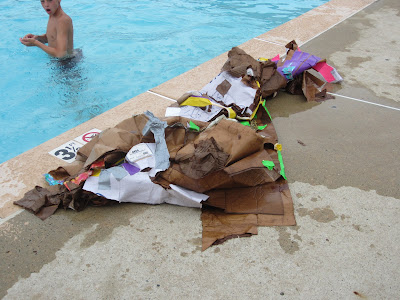 Which is more I can say for one of the other boats! 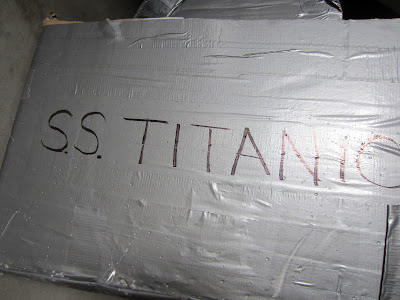 I guess we shouldn’t have listened to my husband when we named our boat!  Now of course my kids won’t let me throw this thing out.
Where am I going to put a huge cardboard shark?!!

Anyway, it was a memorable evening and a fun way to end the weekend!  These summer days sure are dwindling down!

Did you do any “boating” this weekend? 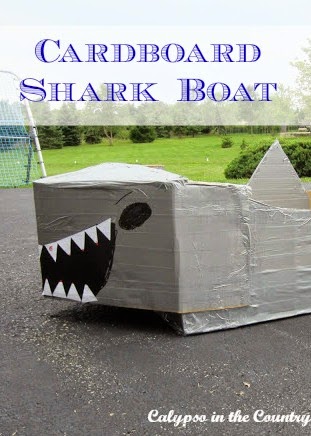 We had our beadboard ceiling installed in the laundry room on Saturday…and I couldn’t be happier! Well, I could be happier if I didn’t have to strain my neck painting it tomorrow.   Either way, I am thrilled with how it turned out! At one point, I was on the fence about which way to run…

Currently, I’m in the process of buying new tile flooring for my laundry room and bathroom.   Since I’m focusing on tile lately, I’ve suddenly started paying attention to how dirty all the grout in our home has become!  Let’s just say I’m not proud!  During my back and forth trips to the store, I discovered…

To celebrate my son’s 9th birthday, we hosted a Lego Themed Party…at our house…with 15 boys. Yes, 15 boys…Inside…I can’t believe I agreed to it.  But somehow we managed to survive the crazy day!… Welcome to the Lego Themed Party: As they guests arrived, the Lego door sign welcomed them and set the tone for…

Do you ever have a decorating idea but can’t find the exact item you want in the store?  Sometimes, you just have to create the look you want yourself.  Today, I’ll share my tips on how to dye a slipcovered headboard! *For your convenience, please note that this post contains affiliate links.  If you make…

I mentioned last week that the kids and I were working on this year’s cardboard boat for the annual Cardboard Boat Regatta at the pool. We worked on the boat last Thursday before hopping in the car and road-tripping to  Washington D.C. for the weekend with the family. We made it home yesterday just in…

Are you loving the cane trend we’re seeing in home decor lately?  As a fan of the tropical- British Colonial style, I’ve always been attracted to furniture and decor made with cane.  So needless to say, I’m thrilled to see more of a selection in the stores.  Of course, I’m always looking for ways to…