Since I don’t want this to turn into a dog blog, I decided that I will just post a puppy update once a week…probably on Sundays.

Today, I will start by showing some pictures from yesterday. 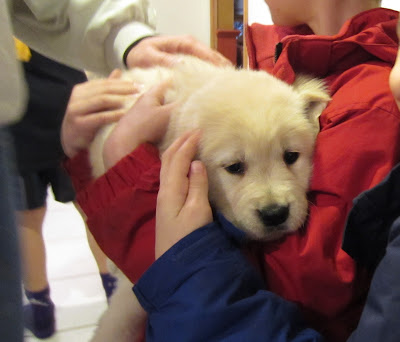 Here we are, picking her up from the breeder. 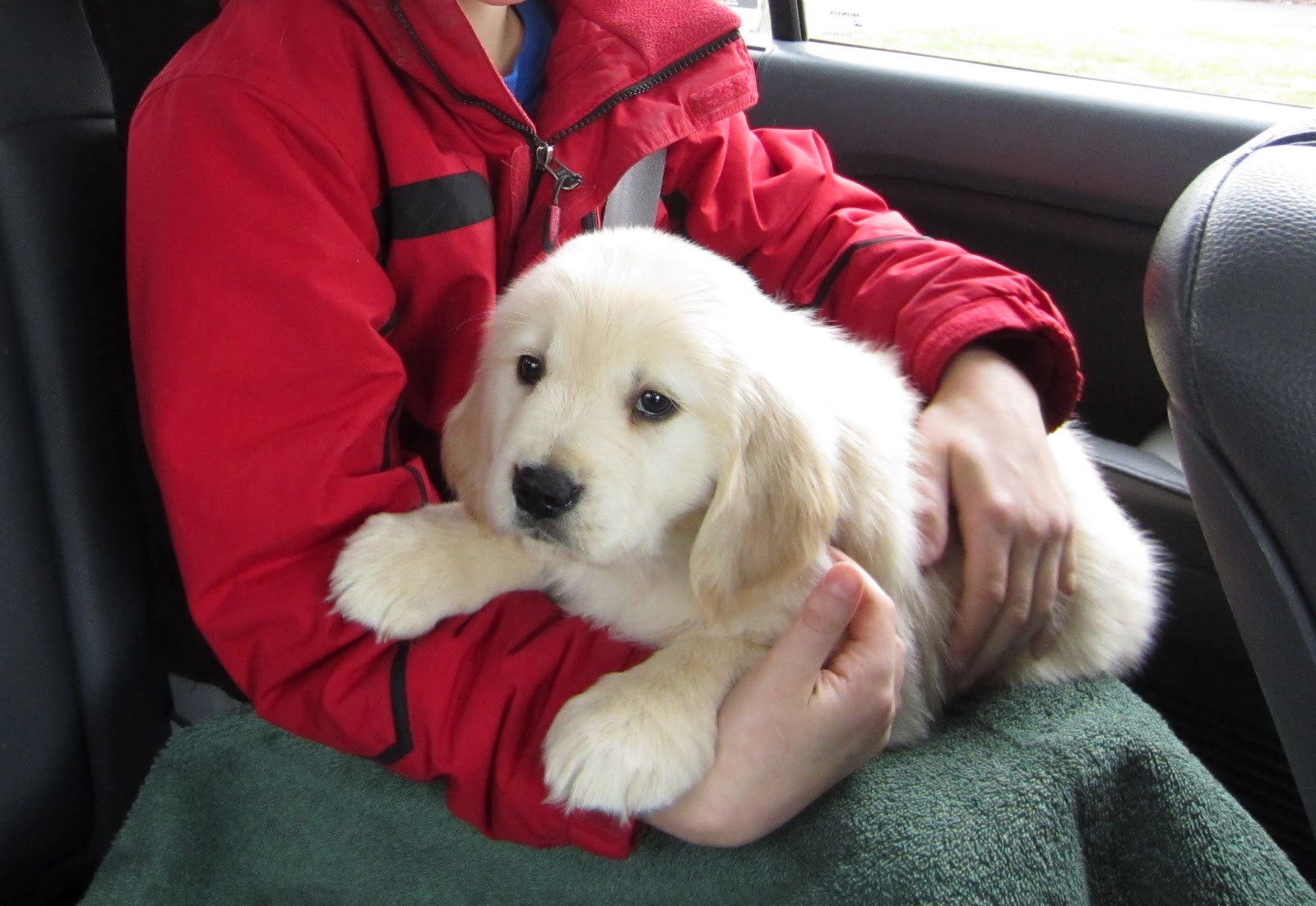 Her car ride home….Is that the saddest face you’ve ever seen?  The poor baby already missed her mommy. 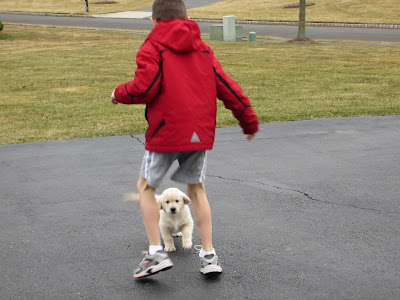 Although, she was very playful when she arrived home. (It really wasn’t warm enough for shorts but my son had basketball that morning) 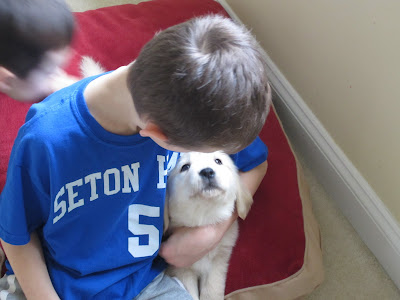 She had plenty of bonding time. 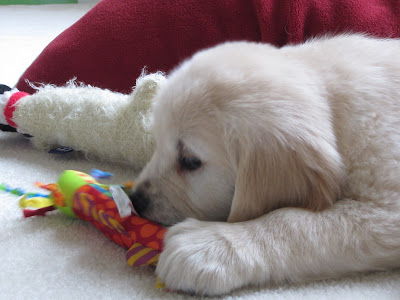 And lots of play time. 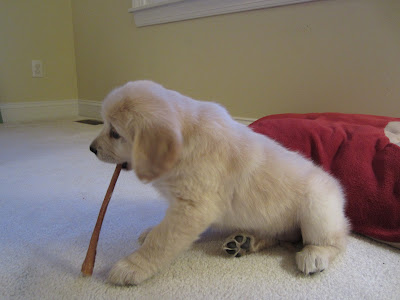 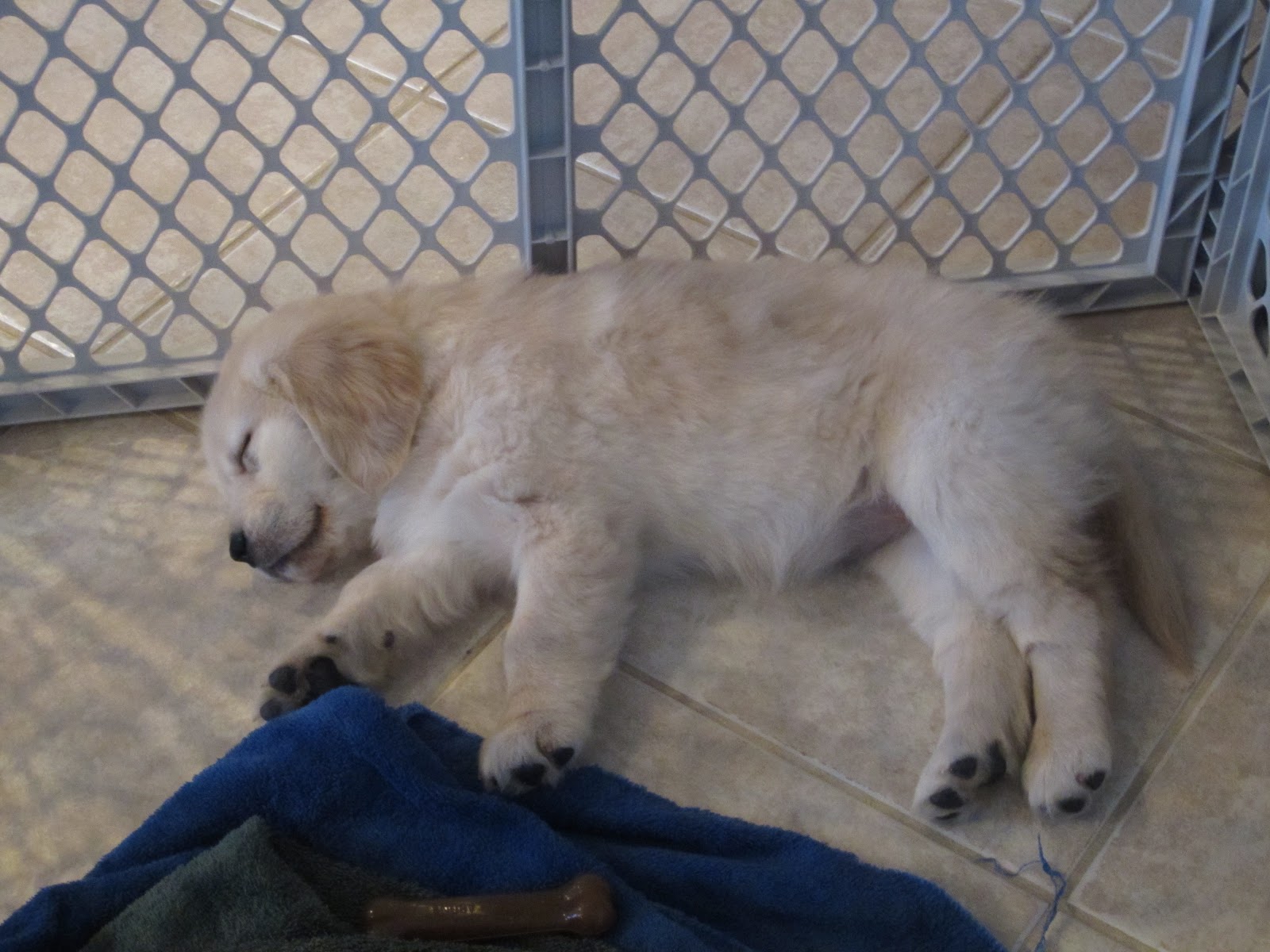 Obviously, she was exhausted by the end of the day.

Oh, but don’t be fooled, my friends…That little innocent face was not trouble-free.

She threw up 3 times in the car.

Pee’d two times in the playroom.

Pooped once in the playroom.

And I was bringing her outside probably every half hour.

First, she fell asleep peacefully in her crate.

My husband took her outside around 11:00 p.m. while I tried to sleep.  Oh, did I mention that Friday afternoon I came down with a fever, chills, sore throat -general flu-like symptoms.  My fever was gone yesterday but I still feel terrible.

Then around 2:00 a.m. the crying and howling began.  Apparently that downstairs playroom where she sleeps is not far enough from our bedroom.

Previously, I read that you are supposed to let her cry and when she is calm and quiet then you can let her out.

So, I came downstairs and reclined on the couch in the family room until she settled down…

After awhile, I finally went to her when she was nice and calm and discovered she pooped in her crate.

Apparently I got the whole crate training thing wrong.  I guess I should have just taken her outside when she started crying and then if she cried when I put her back in the crate, THEN I should have let her cry.

So I brought her directly outside where she pee’d once and then I put her in the fenced play-yard in the kitchen while I cleaned out the poop with this: 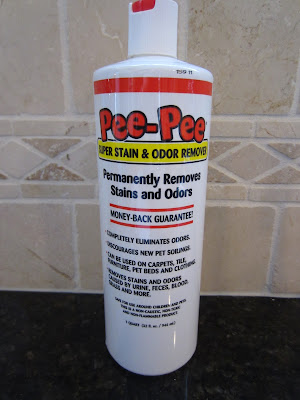 Thankfully, it really worked and got rid of the smell.  I then finally got her back to sleep at around 4:30 a.m. and I went to bed.

When I heard her howling again around 6:30 a.m. I ignored her a bit and then she abruptly stopped.

Since I was suspicious, I came down to find my 8 year old comforting her and talking to her in the sweetest voice.  First, I wasn’t thrilled that he went to her while she was crying because I didn’t want her to think she can cry to get attention.  Then my heart kind of melted about because I realized he thought he was doing a good thing.

And actually he was because she pee’d as soon as I took her out.

It really was wonderful watching him bond with her…a real reminder of why we have this puppy.

But I can honestly say, I am not thrilled yet.  Yes, I think she is adorable and snuggly but all this running outside and cleaning up accidents is not fun.  It’s not like I didn’t know what I was getting into.  I read tons of books and asked friends for advice.  It’s just an adjustment for me.  I loved my life the way it was before and I am not dealing well with the change.

We’ll see how I feel in a few days though after my flu/cold goes away and I get some SLEEP!

Do you have any advice for housebreaking?

Do you have anything positive to tell me to get me through these early weeks?

It’s official! We have lived in our house for 15 years now! Can you believe it?  That sounds like forever to me! I thought it would be fun to show you a few before and after photos.  And when I say “before” I really mean “before”! Starting with – before there was even a house!…

It’s been a beautiful fall weekend. The perfect weather to play in the leaves… or in Rosie’s case, carry them around… and chase them across the driveway. It was quite the adventure for her. And even more fun to carry around branches. Autumn can be such a blast! Did you enjoy the fall weather this weekend?

Well, I might be a little dramatic using the word, ‘disastrous’, but then again I tend to get a bit extreme when I obsess over things… Recently, we ordered bar stools for the kitchen of our ski condo in Vermont.  The old stools were a bit worn out from many years of renting the place…

Happy First Day of Summer Everyone! Ahh…June 21st The longest day of the year… I love how the summer sun illuminates the front rooms of my house. The light streams in from every angle. This is the most perfect time of the year to me. There is light in places that would stay dark all winter. I…

There are 52 weeks in a year and do you know what that means?… Today is the last official “Weekend Pupdate.” Rosie will still pop up in my posts from time to time but I think documenting her first year with us is probably enough. I mean really, how much adventure can one golden retriever…

Since I will be up to my eyeballs in turkey tomorrow, and will not have a chance to get near my computer, I would like to say Happy Thanksgiving to everyone a day early! And not only will I be enjoying the Thanksgiving festivities, but tomorrow I will also be celebrating my birthday! Yes, I…