Recently, I mentioned that Drew and Jonathan Scott AKA The Property Brothers were making an appearance at the grand opening of World Market in Livingston, NJ.  Well, my kids and I managed to get ourselves out of the house in time for an exciting day meeting The Property Brothers! 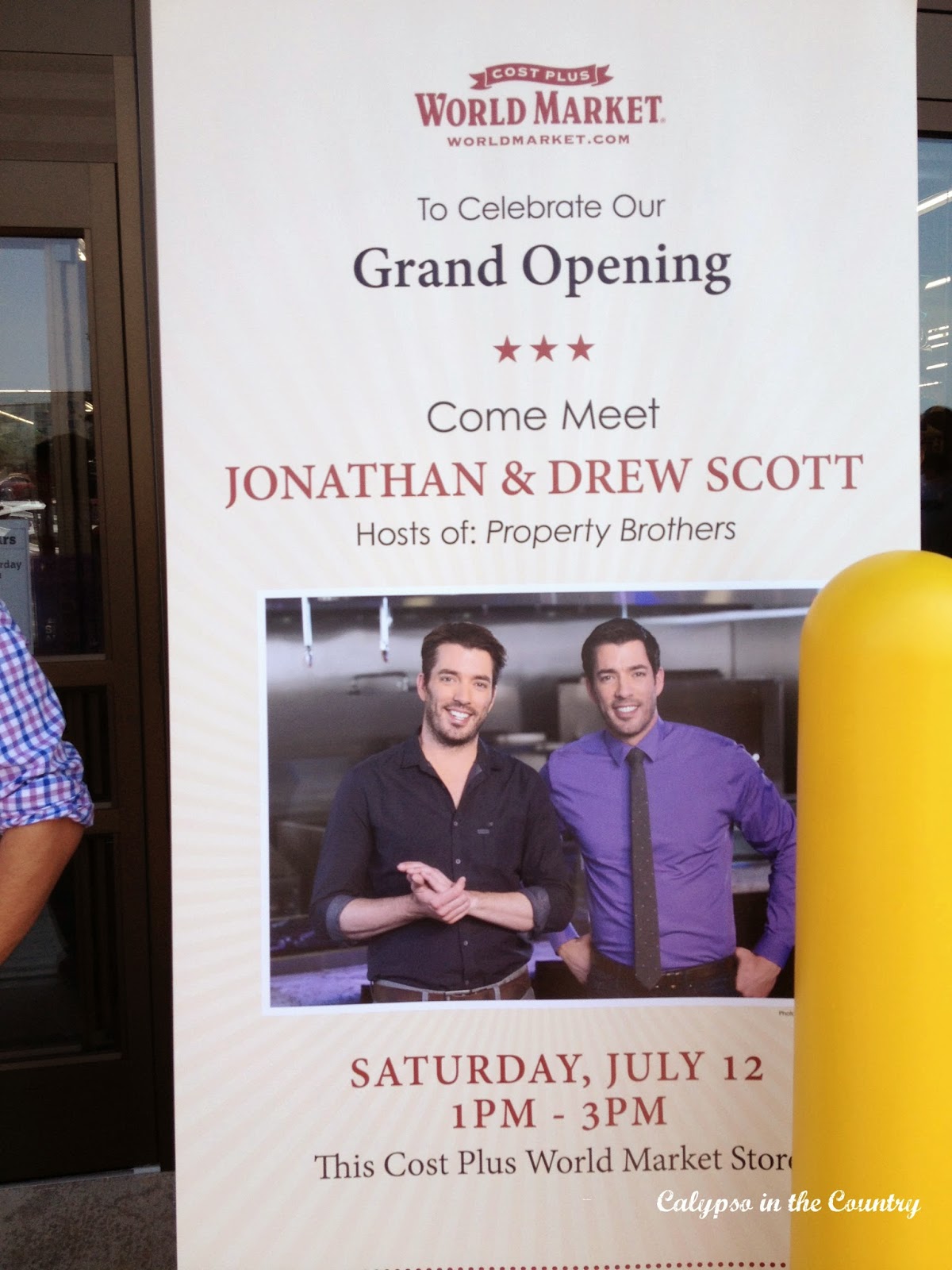 For this event, the first 200 people who donated 5 non-perishable food items were given a ticket with a number to stand in line.  We were number 161.  After the first 200 people, they gave out sticky notes with numbers for all the extras.  Those people were not guaranteed to get in but it looked like the store was going to make an effort to accommodate everyone. 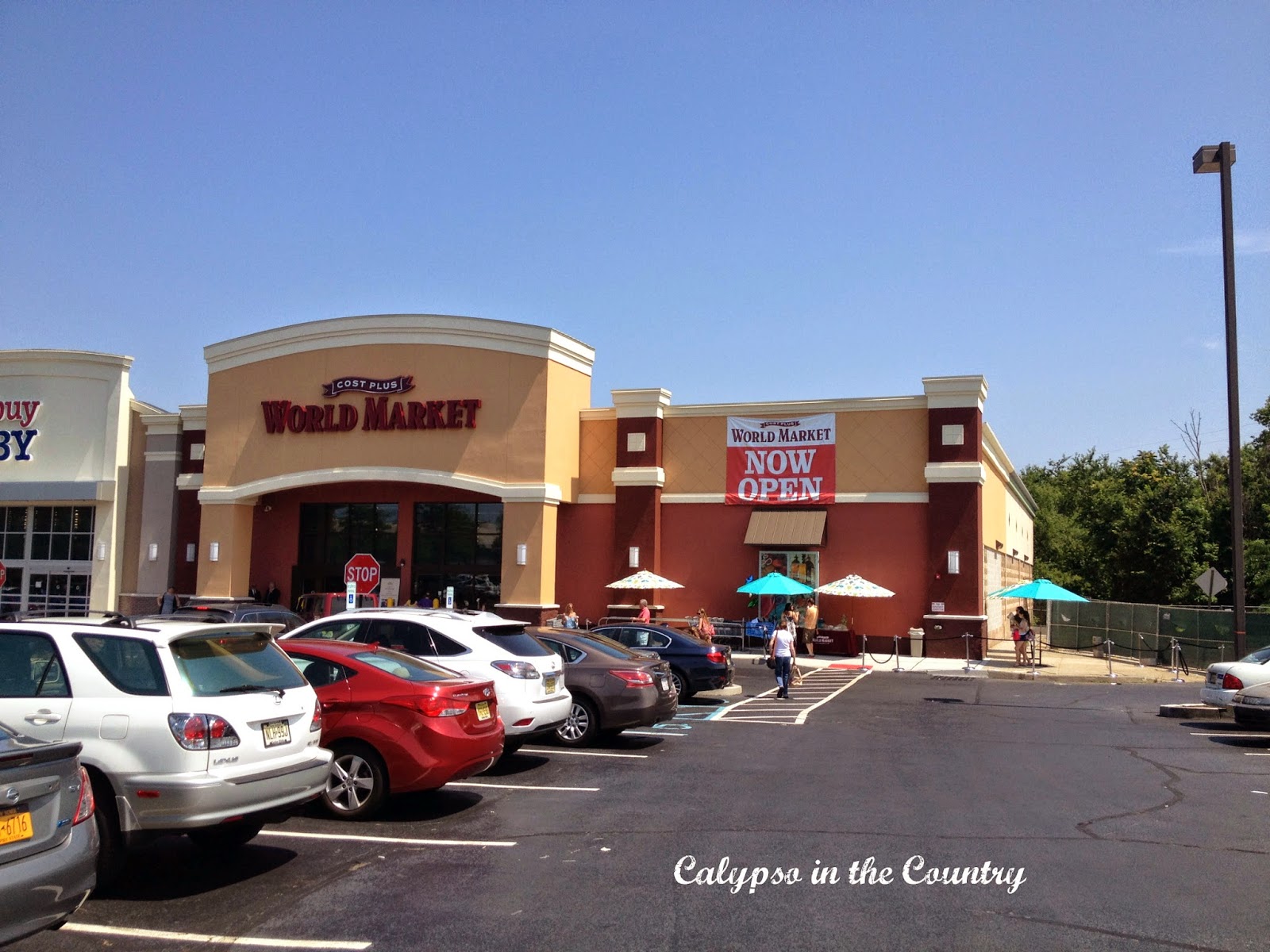 Before the line formed outside, we had some time to shop.  Since this store was our first World Market in the area, I was so excited to see all the merchandise in person.  The place was obviously packed with fans of the Property Brothers but people were also buying.  Since my boys were with me, I only had a chance to pick up one little lamp.  I couldn’t push my luck though.  At their ages, they were getting a bit impatient with the whole shopping scene.

Maybe they weren’t thrilled about shopping, but they were very excited to meet the Property Brothers!  Both of my kids watch their shows with me all the time.  Since my 10 year old might want to be an architect someday, he was looking forward to chatting with Jonathan and Drew!

Waiting in Line to Meet the Property Brothers:

But before meeting them, we had to stand in line in the sweltering sun… 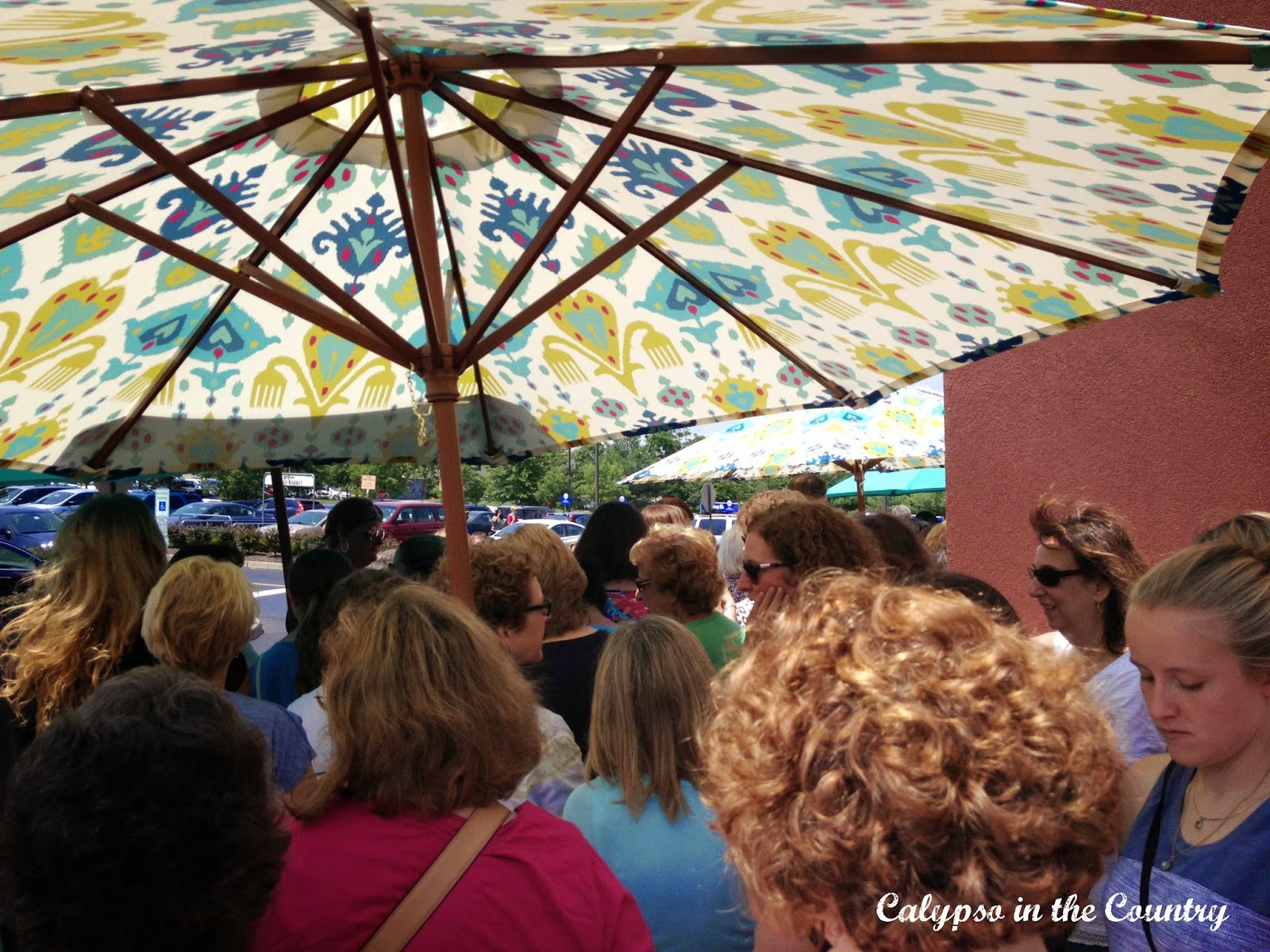 Luckily, the store set up a bunch of pretty umbrellas which provided some sun coverage.  Good thing because it was very hot and humid that day!  World Market did a great job of keeping everyone hydrated with dispensers of water, lemon water and cucumber water.  During our time in line, we stood near a friendly crowd of people and everyone was excited to see the Brothers.  Thankfully, the line moved at 25 people at a time so overall the wait wasn’t too dreadful.

But we were thrilled to finally get inside the air conditioned store!  And from that point on, the line moved pretty fast. 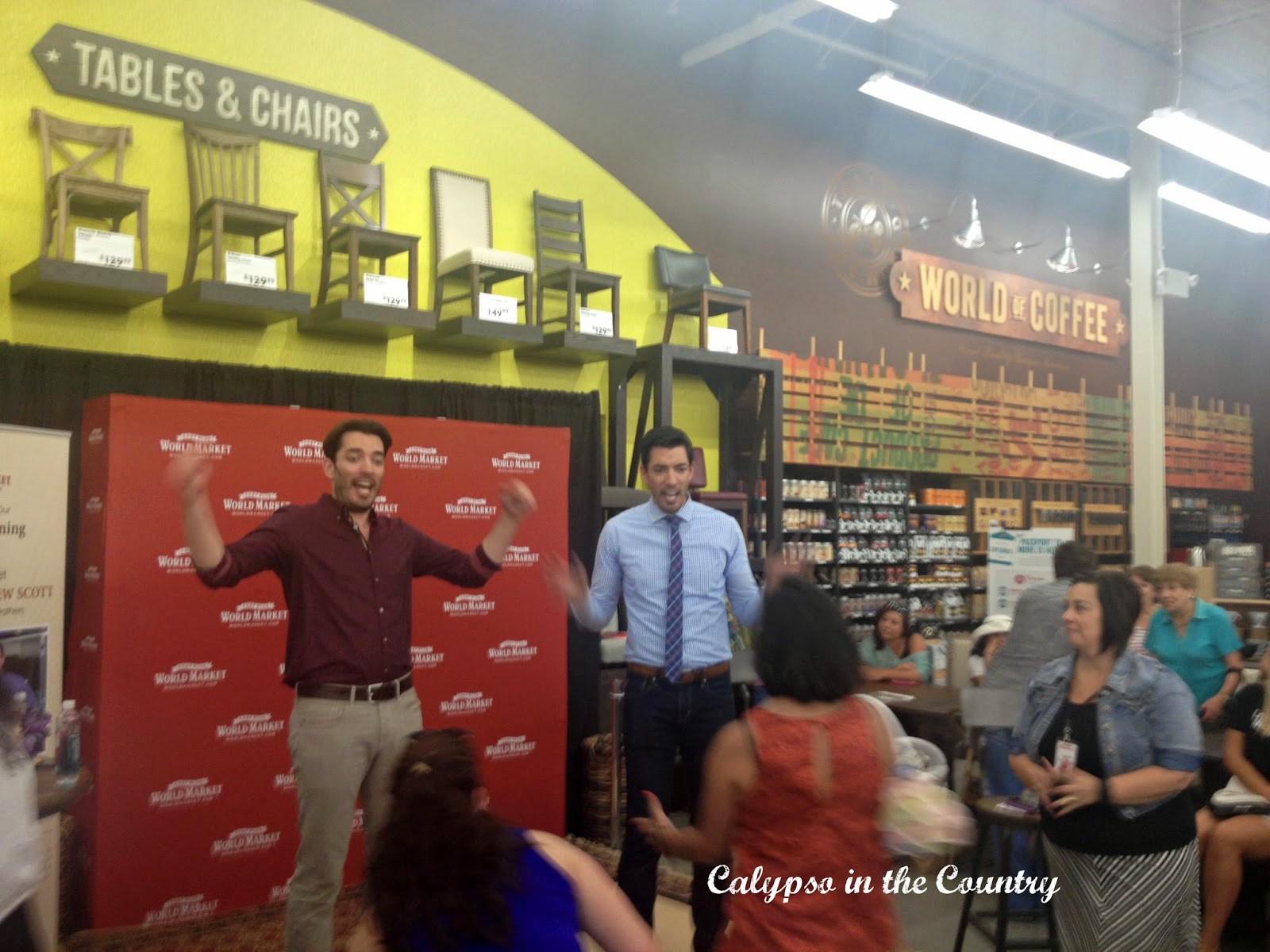 Meeting the Property Brothers in Person:

Jonathan and Drew were as dynamic in person as you would imagine….and tall, very tall! 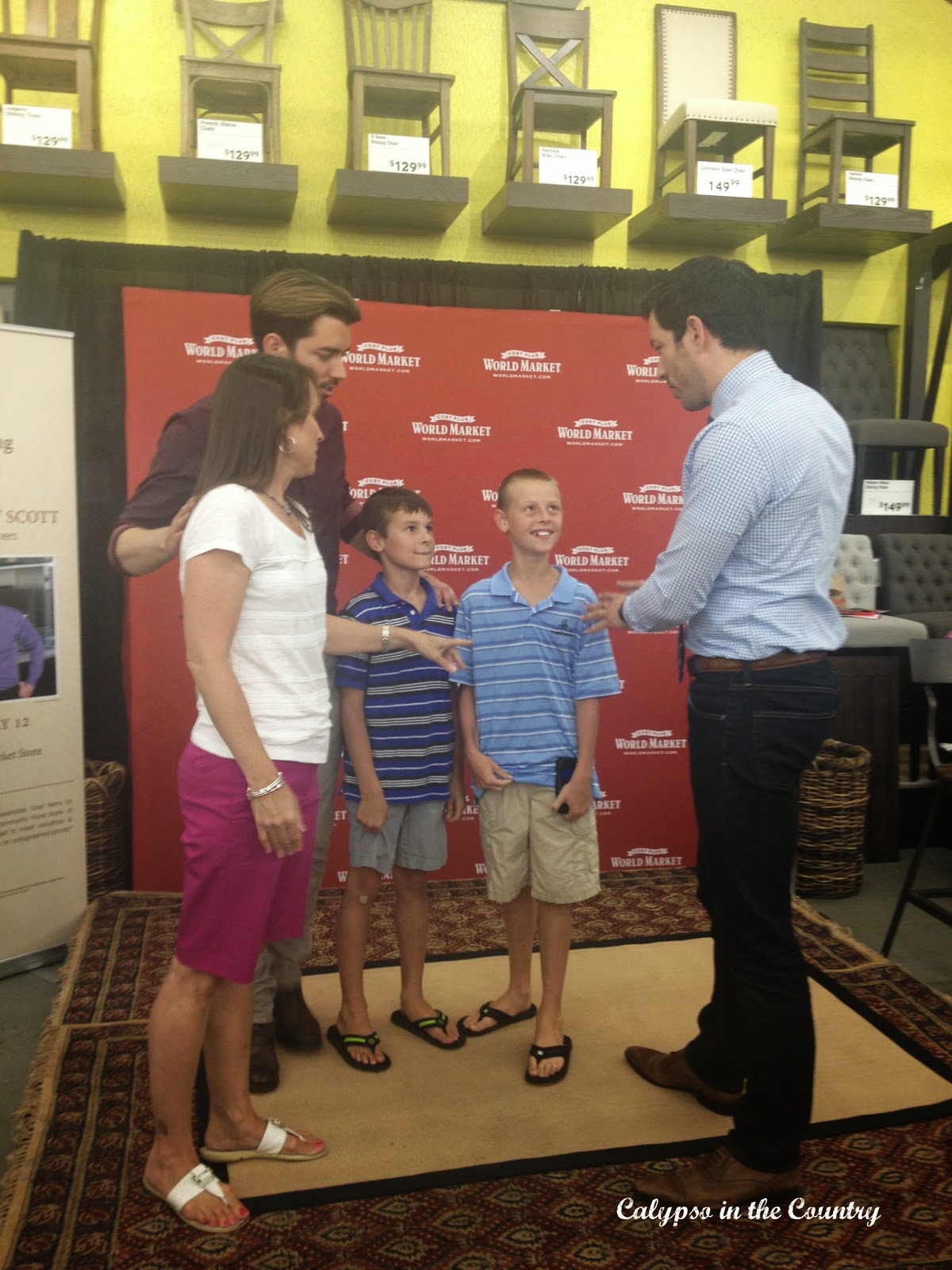 They actually made a point to chat with everyone.  It was very sweet how they took the time to make my boys feel special. 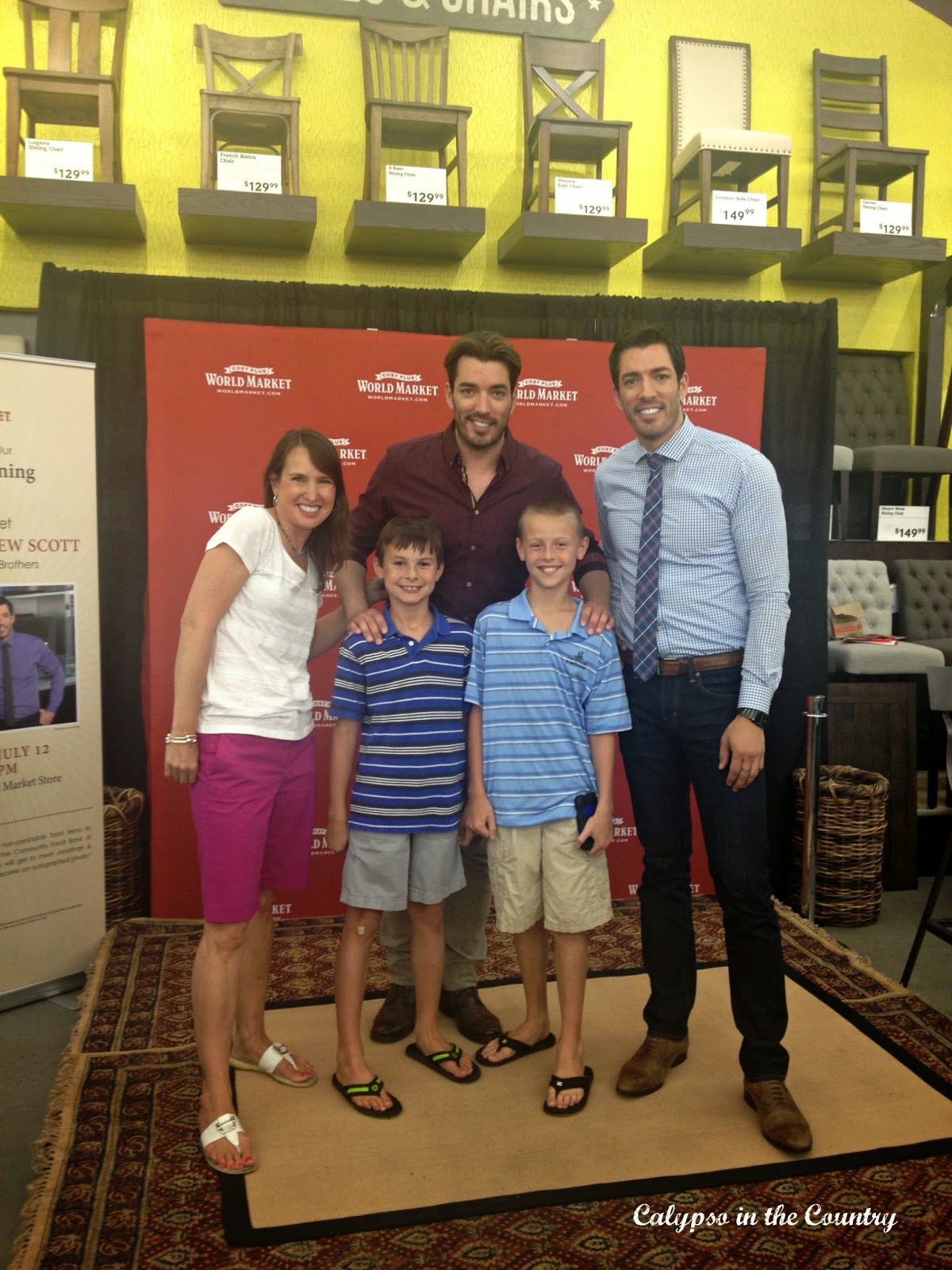 Yeah, I know – I don’t normally post pictures of my kids but I wanted to share their excitement with you.  Actually, those two kids aren’t even my boys.  I just grabbed them from the crowd for the picture….lol.

Let me tell you, it was a thrilling day for everyone at the grand opening of World Market!  As nice as the store was, the best part was definitely meeting the Property Brothers!

Do you have a World Market in your area?

Are you a fan of the Property Brothers?

Hello, friends!  I hope you’re enjoying the weekend! Today, I’d like to welcome you to my new weekly series called – Saturday Spotlight! For awhile, I’ve been thinking about ways to highlight things that I find inspiring.  Sure, over the years I’ve shared “Recent Happenings”, but those posts were very random.  From now on, I’m…

This week, Rosie spent most of her time chewing things. Luckily, none of those things were furniture. Just a few sticks… And she even started carrying around her old toy that came home with her from the breeder. She always had something in her mouth. She also got a little stubborn this week.  This is…

I have had a crazy week around here. Unfortunately, I have nothing finished to show you. (Yeah, that really makes you want to keep reading!) Anyway we are in the midst of renovating my office! Here’s a peek at what’s been going on… The hardwood floor boxes have arrived!   As you can see, we…

I am on a roll with my summer reading.  Recently, I provided you with some book recommendations and now I have another to add to the list.  (Especially for all you Gone With the Wind fans!) Please note this post contains affiliate links, which means I will receive a small commission if you make a purchase after…

Happy weekend and welcome to the Saturday Spotlight!  As we approach Thanksgiving and Christmas, I’ve been thinking about some of our favorite holiday traditions. Even though most of them are quite simple, our family has come to expect them year after year.  I’m sure you and your family have a bunch as well.  So today, I’m…

It’s been a busy week but I had to make time to do my Rosie post! Play hard and sleep hard seemed to be the theme of the week. As you can see, she still loves to steal baseball hats! But she still loves her other toys too! She spent a lot of time outside….