Some of you may know that I am a HUGE Jerry Seinfeld fan!

I think he is the funniest person on the planet.  I still laugh hysterically when I watch a Seinfeld episode, even if I have seen it many times.

And let me tell you, I was laughing hysterically last night!

Mr. C. and I had a night out in Philadelphia to use the Seinfeld tickets he bought me for my birthday.  Jerry was doing two shows at the Academy of Music and we had tickets for the 9:30 show. 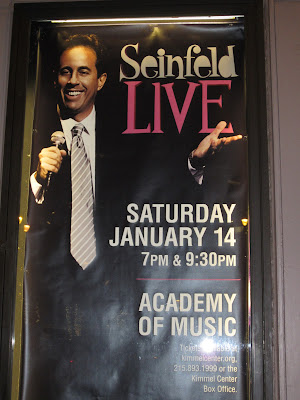 I had never been the Academy of Music before

but the inside was quite impressive! 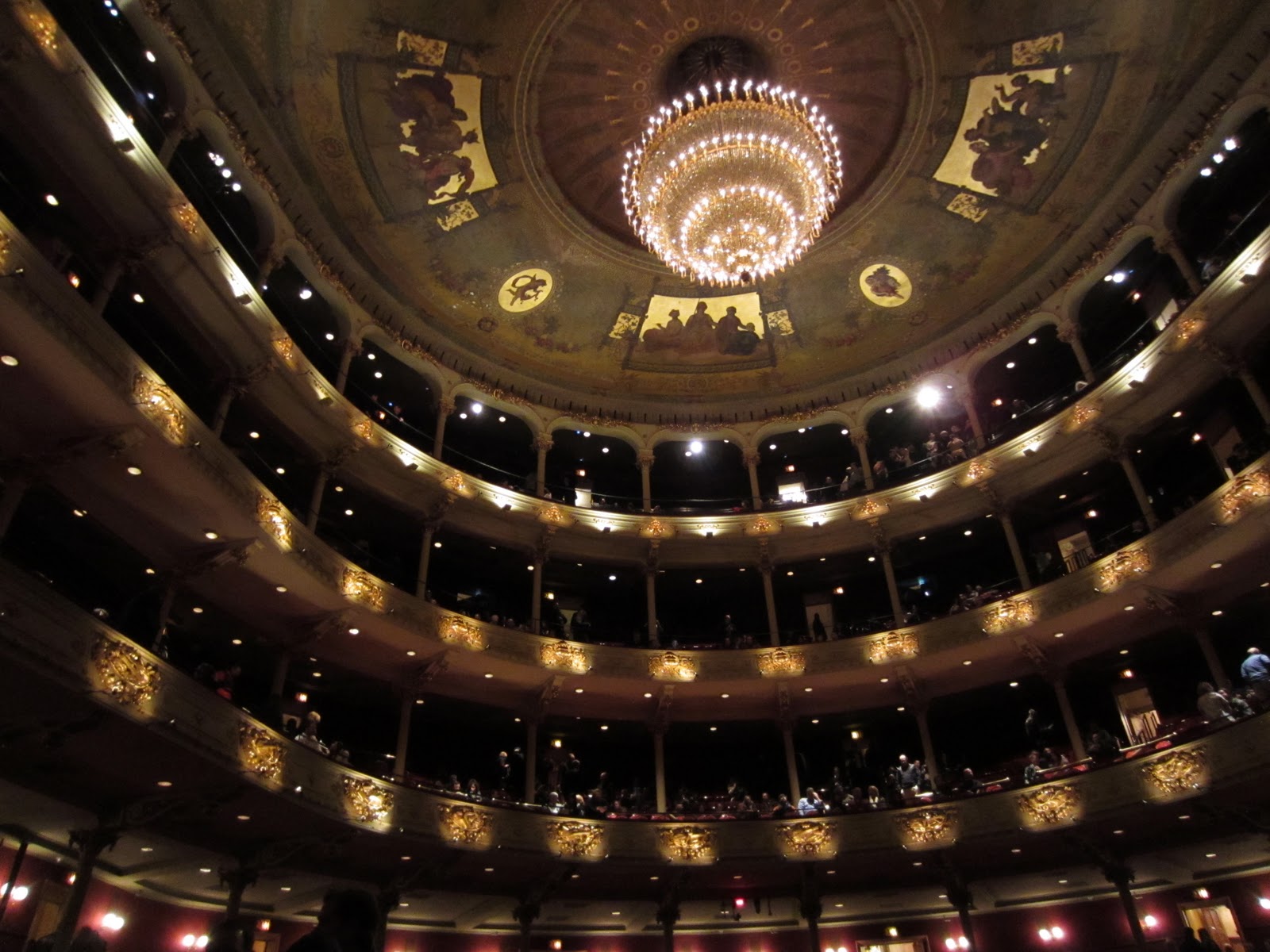 It reminded me of a New York Broadway theatre. 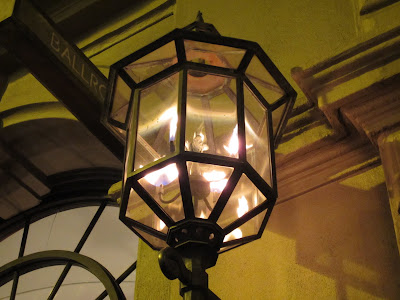 I loved the gas lanterns outside too.

But what I loved most,

were our 2nd Row seats! 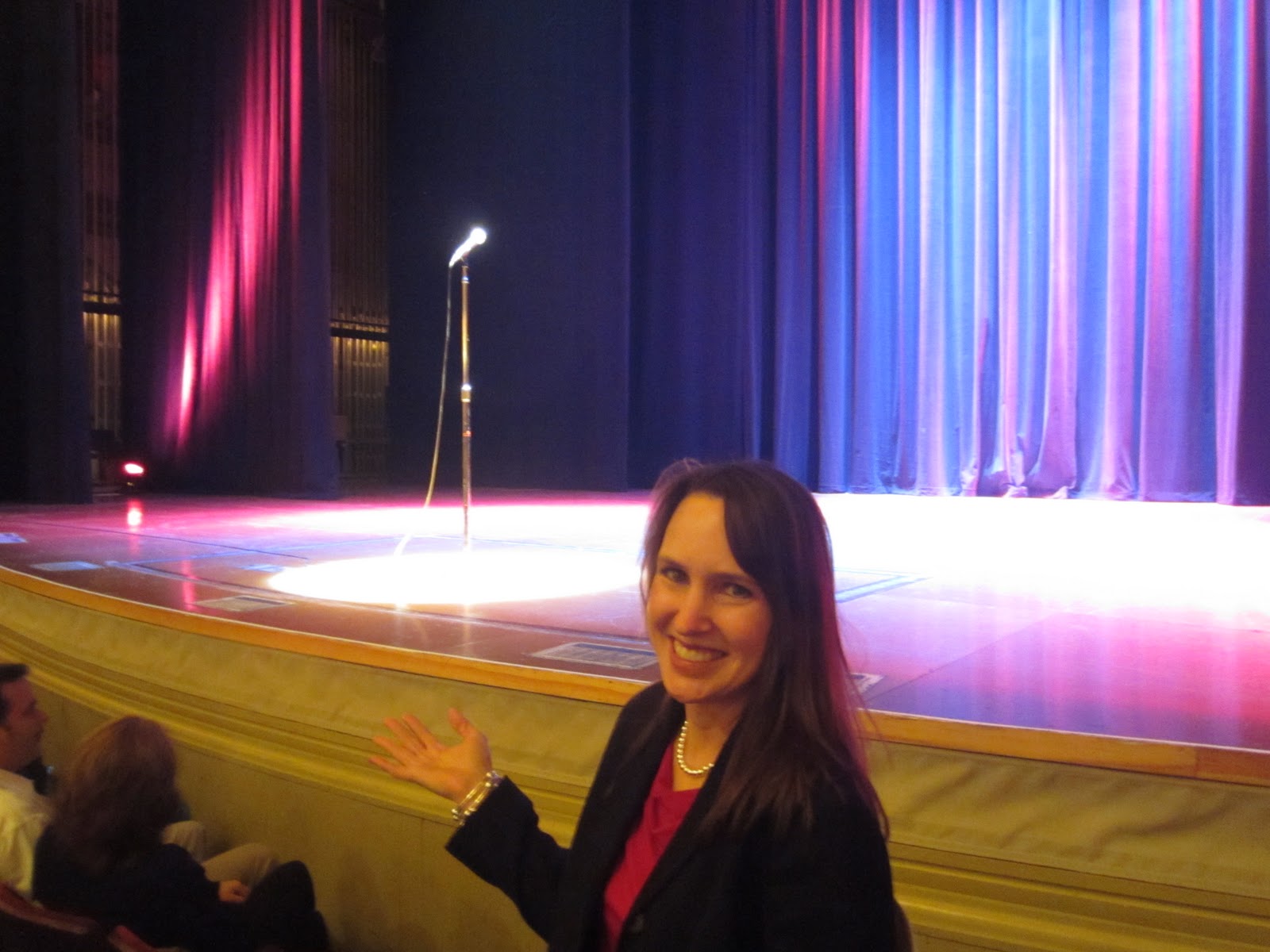 As you can see, I could barely contain my excitement!

We weren’t supposed to take pictures during the show.

Although, I was laughing too hard the whole time

to even think of my camera anyway!

But at the very end,

I snapped a quick photo! 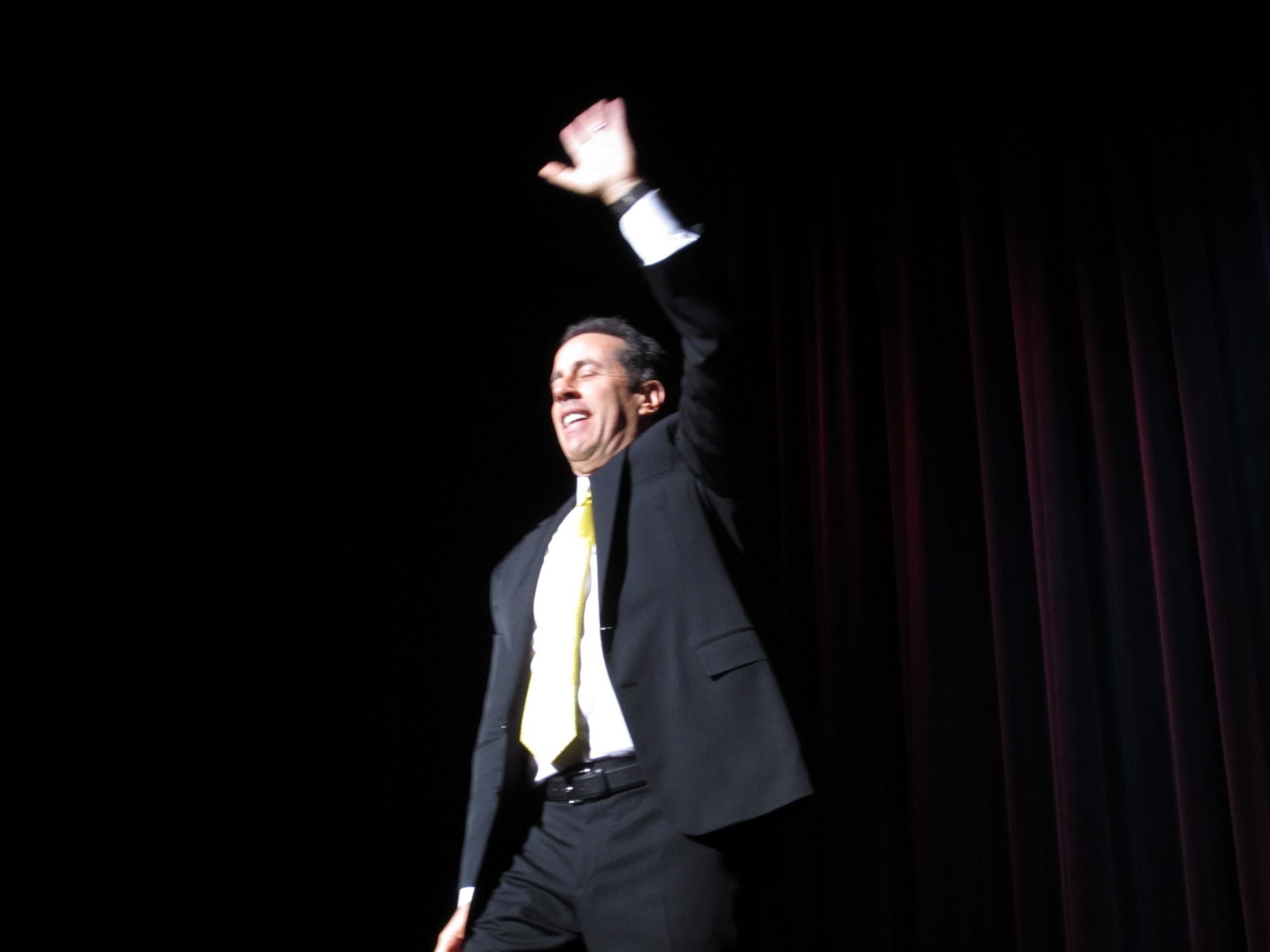 Jerry, you are amazing!

I have seen him do a lot of interviews recently…

He also did some stand-up on Letterman and guest co-hosted Live with Kelly a couple times, so I was a little worried I would recognize too much of his routine.

But that didn’t happen!  His material was fresh and his observational humor was going strong!  I only recognized a few small remarks here and there.  But I can honestly say I enjoyed every single second!

I also had some great laughs from Seinfeld’s warm-up comic, Larry Miller, who is best known for the movie, “Best in Show.”

Since the show was at 9:30, we had dinner beforehand at a restaurant called Time.  It was more of a late night bar type of place but the food was good and they had a great jazz band. 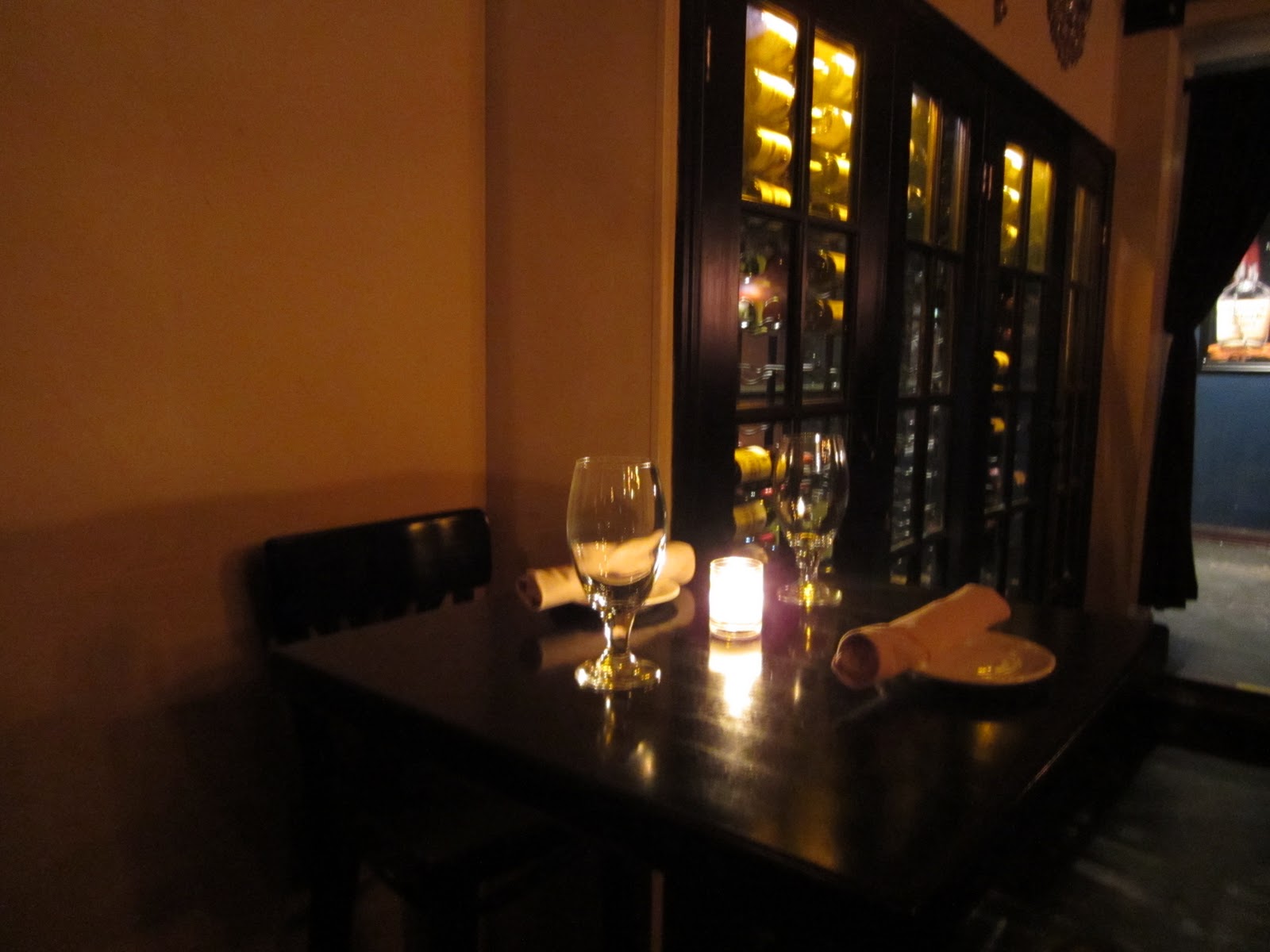 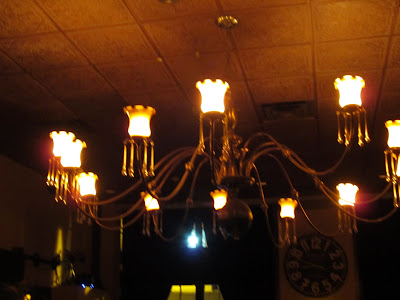 They had this big crazy looking chandelier over the bar,

and of course clocks all over, hence the name…Time. 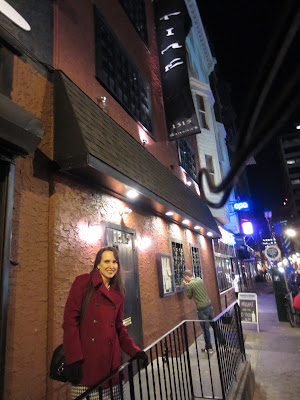 Not much of an entrance,

but I had to do a quick pose.

Later we stayed at the Westin

which is known for their “Heavenly Bed”. 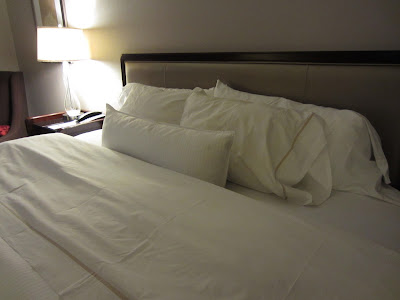 “Why are you taking a picture of the bed?”

But we didn’t get to spend much time in it because at 1:30 a.m. the fire drill went off and we had to evacuate the building! So in our pajamas and coats, we descended down the 15 flights of stairs to the freezing outside.

At first, Mr. C. didn’t think we needed to evacuate but I insisted.  I take fire alarms very seriously.

Above the floor number sign on each landing was the sign, “North Tower”.  And if you are from the New York area, you know that is a bit too reminiscent of a certain tower where not enough people evacuated.  I didn’t want to take any chances.

Luckily after a little while we were able to go back in and take the elevator back up.  Of course, at that point, I couldn’t sleep and probably didn’t fall back asleep till about 4:30 am.

But the weird thing about it was right before I went to bed (the first time) I pictured us evacuating the building because of the fire alarm.  I swear to you I thought about this!  But then I figured I was just worried about being away from the kids so I forgot about it…until the alarm really did go off!  Strange huh?  These kind of things happen to me all the time.

I wrote a couple posts a while back:

Coincidence or Just In Sync

At least this time it ended up being nothing!

But overall, even with the interrupted sleep, we had an incredible night out.

I highly recommend you see Jerry Seinfeld if he comes to your town!

Do you have any Seinfeld stories?

How about any psychic stories?

This morning as I sat at the car dealer waiting for my brakes to get repaired, I couldn’t ignore the television in the waiting room.  The news was blaring various updates of the people congregating in Times Square on this cold winter day.  The fools were all bundled up, securing the spots they will stand…

Rosie kicked off the new year with a long weekend stay at the kennel. My heart just broke when we dropped her off but it allowed us to have a fabulous family vacation in Vermont! Rosie was excited to see us when we picked her up this afternoon. And then she got right to work…

Last week, I discussed the possibility of painting the door to my garage black. Not only did you all agree it was a great idea, but I also decided it was the right thing to do. Thanks for your advice by the way! My plan is to start with the garage side of the door….

I am so sad watching the news unfold as our Seaside Boardwalk takes another hit. First Hurricane Sandy destroyed most of the boardwalk but most of it was rebuilt over this past year. Now this section of the boardwalk is on fire. Please pray for the safety of everyone involved! Are you seeing this on…

After a rain shower this week, Rosie decided it would be fun to play in some very muddy puddles.  Being messy is so much fun… Look at those legs! This is why having a white carpet is never a good idea!    I couldn’t let “dirty doggy” back in the house like that, so we hosed…

If your family is like mine, your kids are constantly looking for socks to throw on as they dash out the door.  Our problem is that socks disappear somewhere between the laundry room and the sock drawer in the bedroom.  Then everyone ends up running around in a panic when they are trying to make…