On day three of our trip, we woke up to another beautiful, sunny day.  Luckily, the wind died down and it ended up being a perfect day to walk around Boston with the boys!

Since I couldn’t leave Boston without one more stroll through the Beacon Hill area, I chose a place for breakfast a few blocks down on Charles Street. 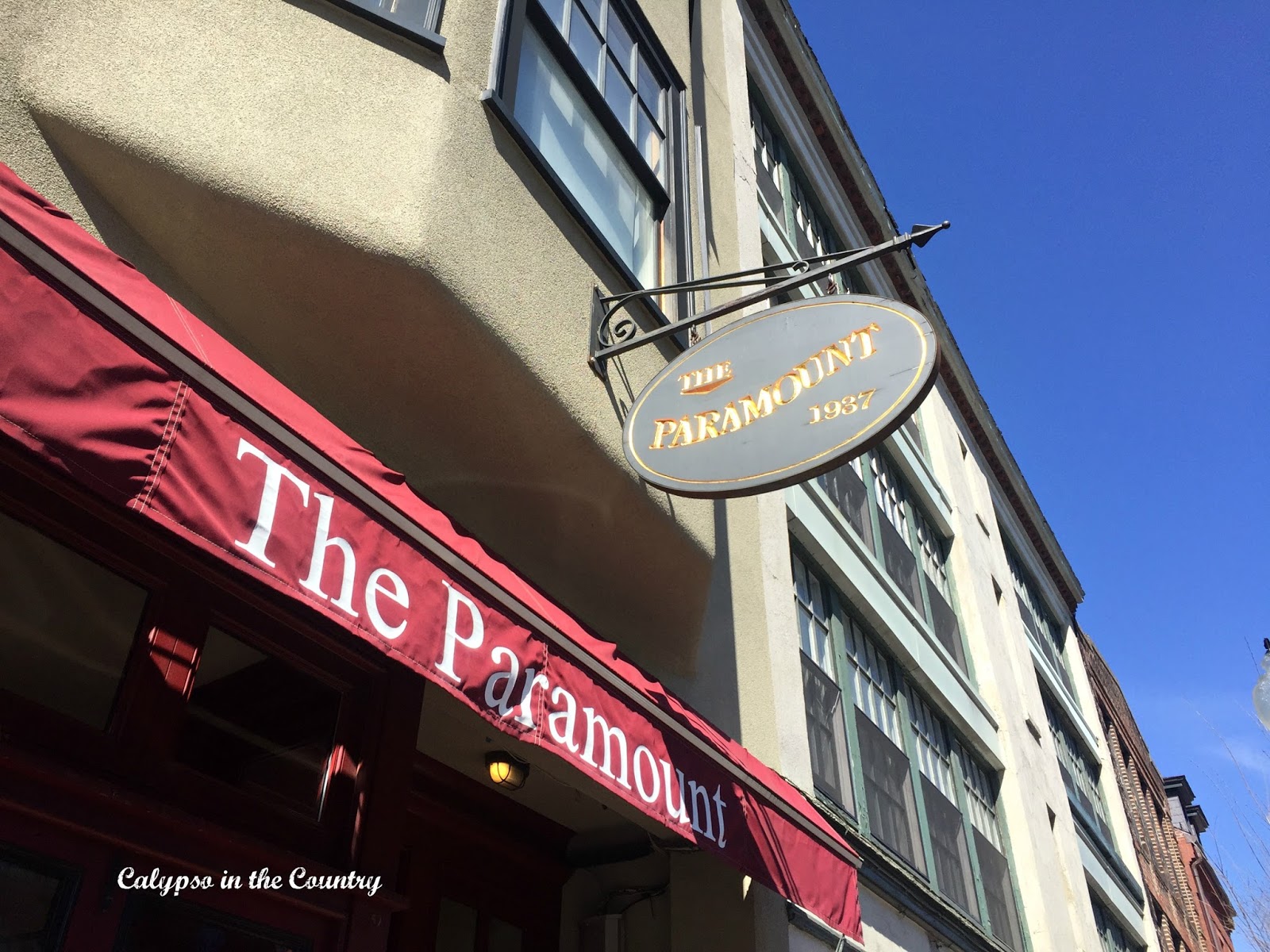 Ever since I read up on The Paramount before our trip, I was eager to stop in for breakfast.  Thankfully, the tiny diner style restaurant lived up to the rave reviews!  With the quick service and delicious fresh food, The Paramount ended up being a perfect place to fill our bellies for a day of sightseeing!

After breakfast, we took a taxi up to the inner harbor to tour the Boston Tea Party Ships and Museum. 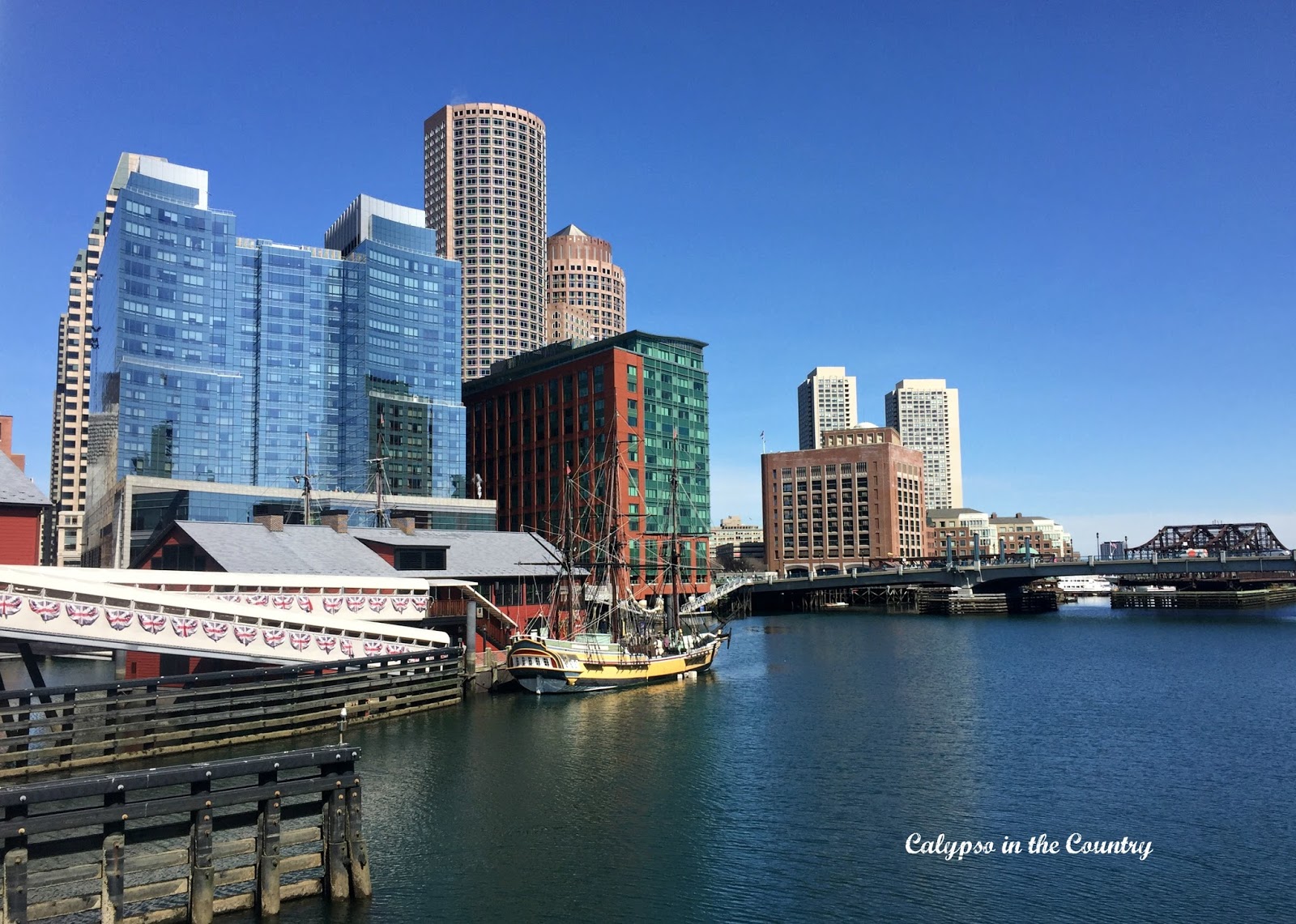 This was definitely one of my favorite sights and a great attraction to see in Boston with boys. 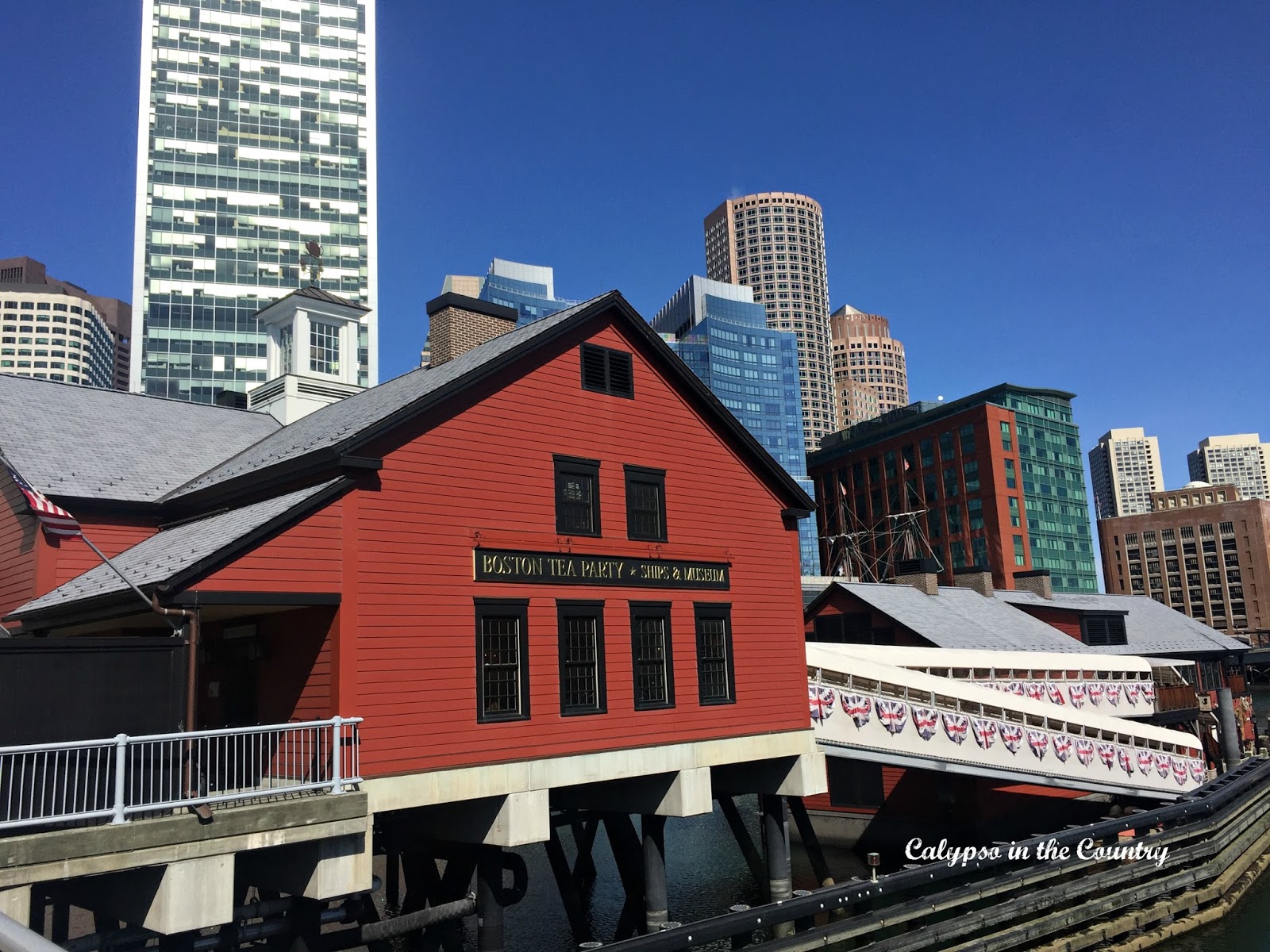 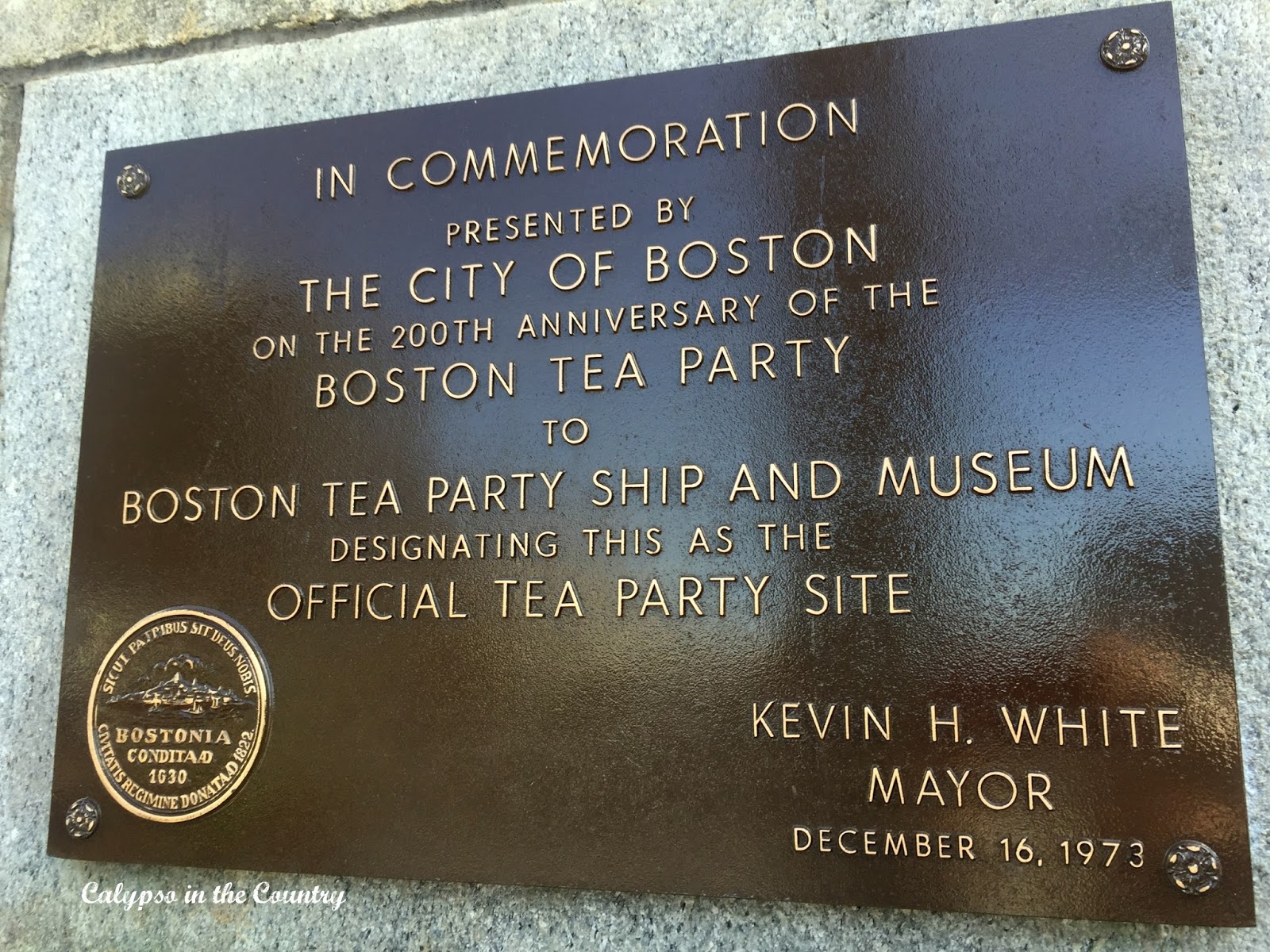 First, we headed to the Old South Meeting House to begin the tour.  Although, we didn’t know what to expect as we were seated and handed out cards with our ‘new names’ . 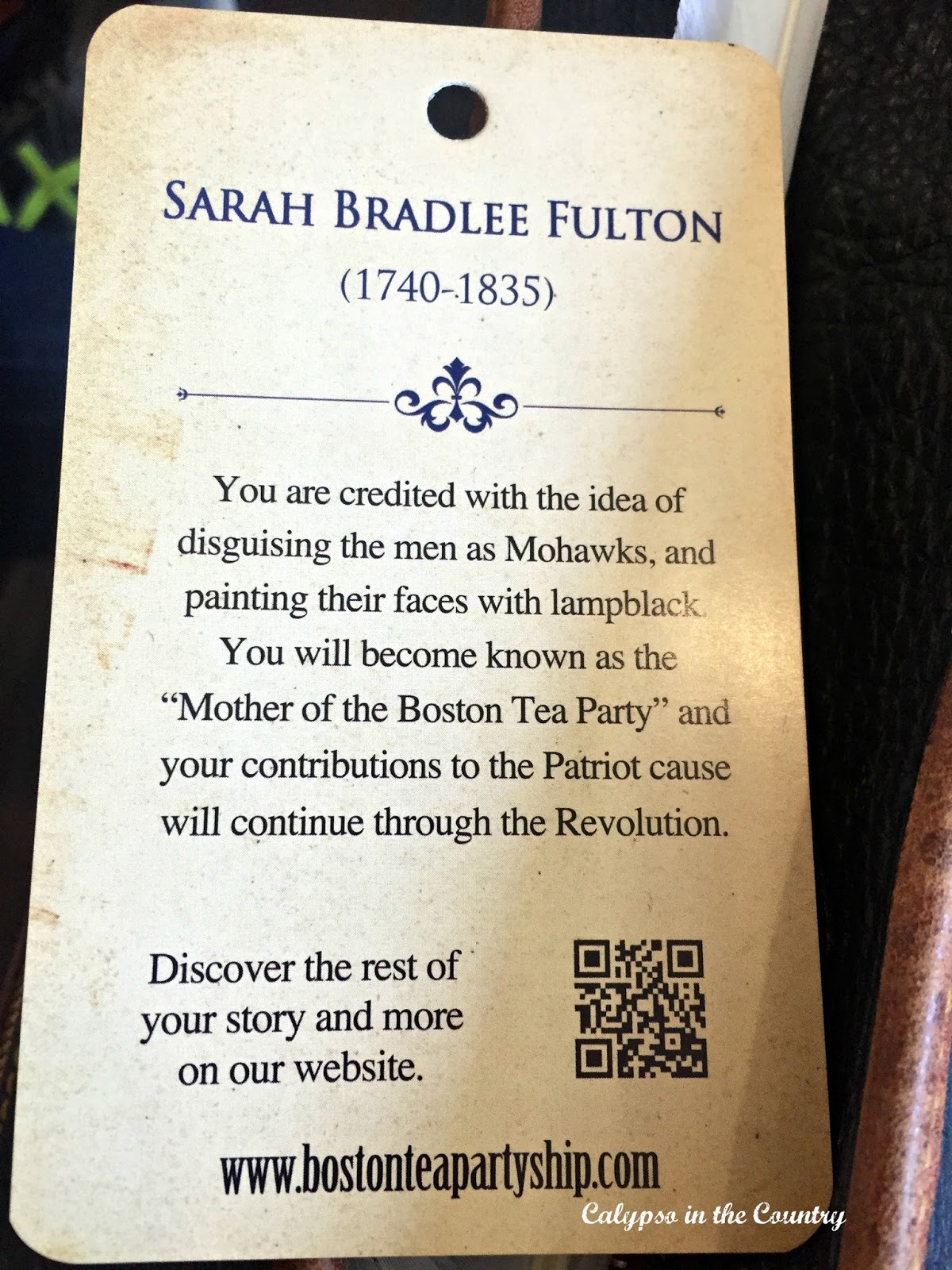 From there, we were taken on a journey back in time as live actors reenacted the meeting to fight against unfair taxation.  As part of the interactive experience, we were all encouraged to yell out, clap and make discouraging sounds as Samuel Adams addressed the crowd. 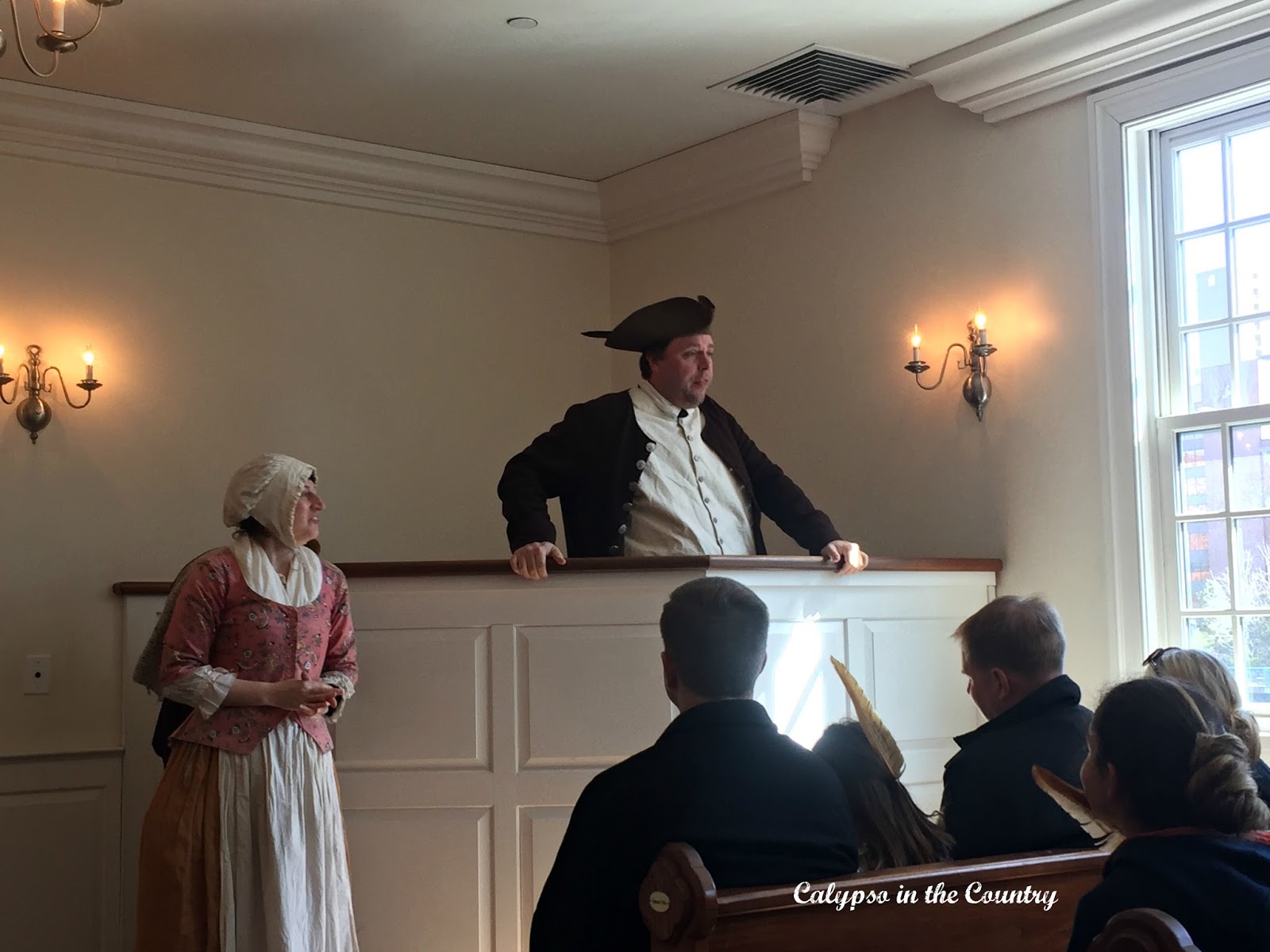 After the “meeting”, we headed down to tour the authentically restored tea party ships.  On one of the ships, the kids were able to throw the tea boxes into the harbor just like the Sons of Liberty did on December 16, 1773. 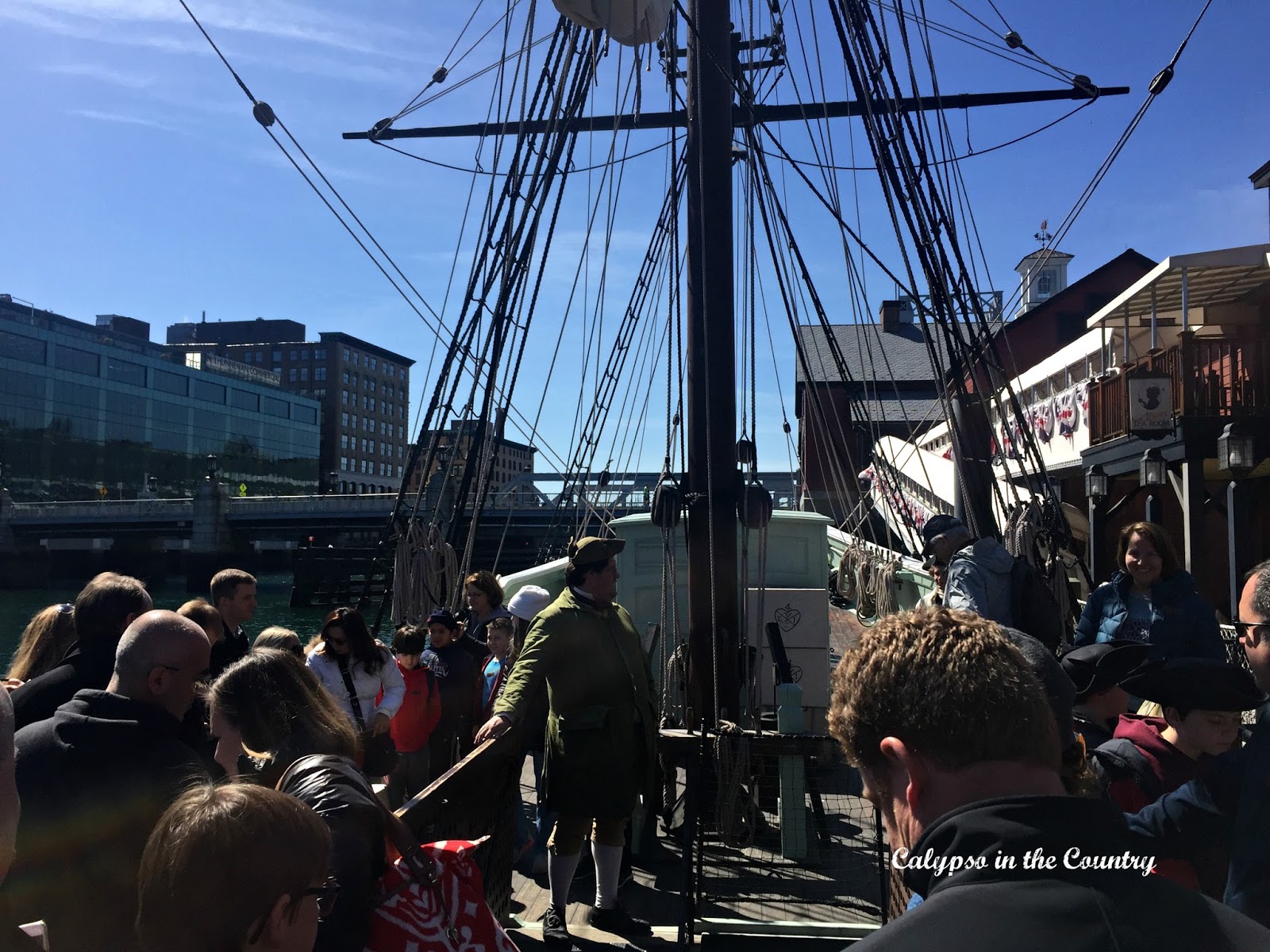 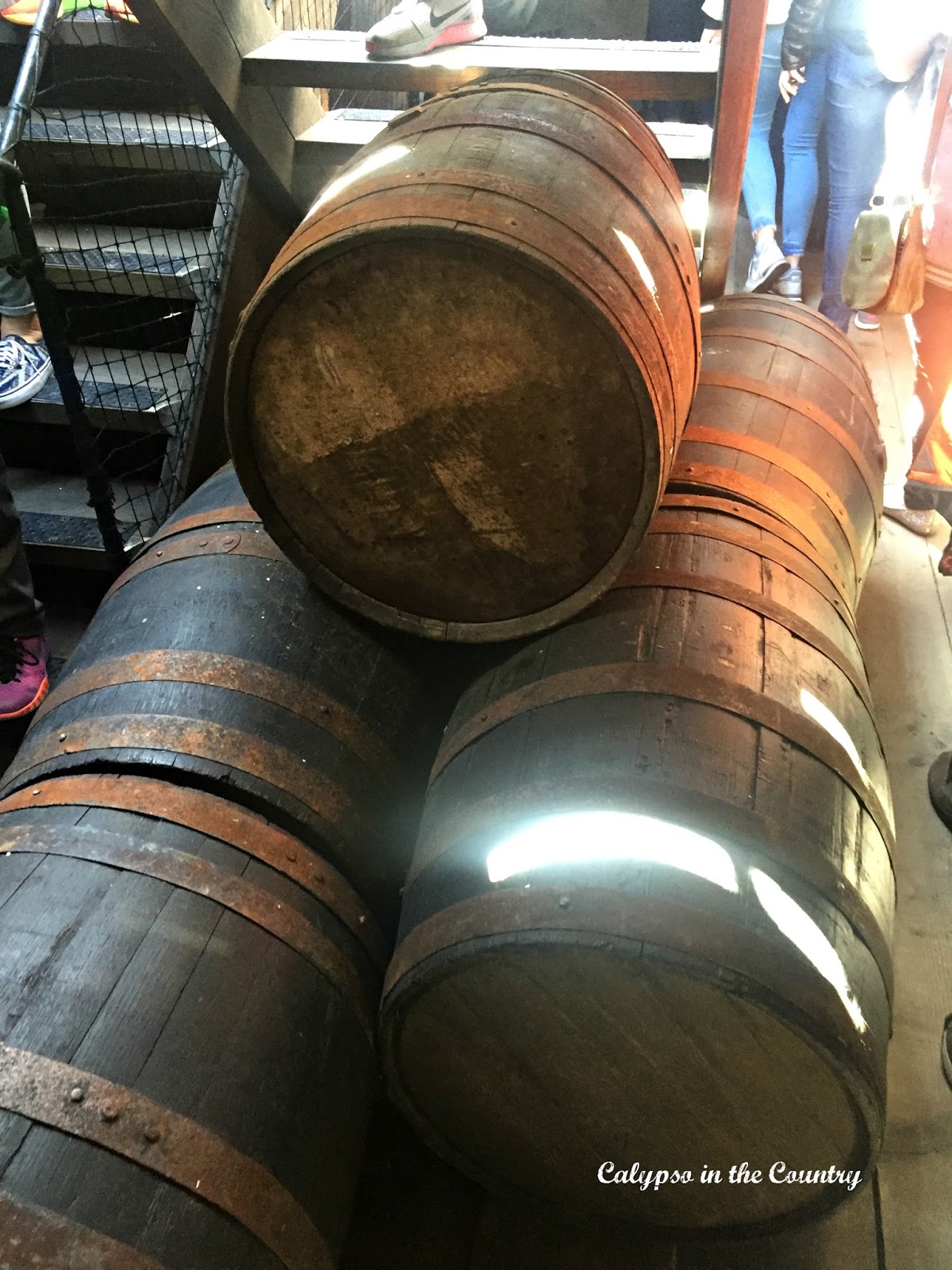 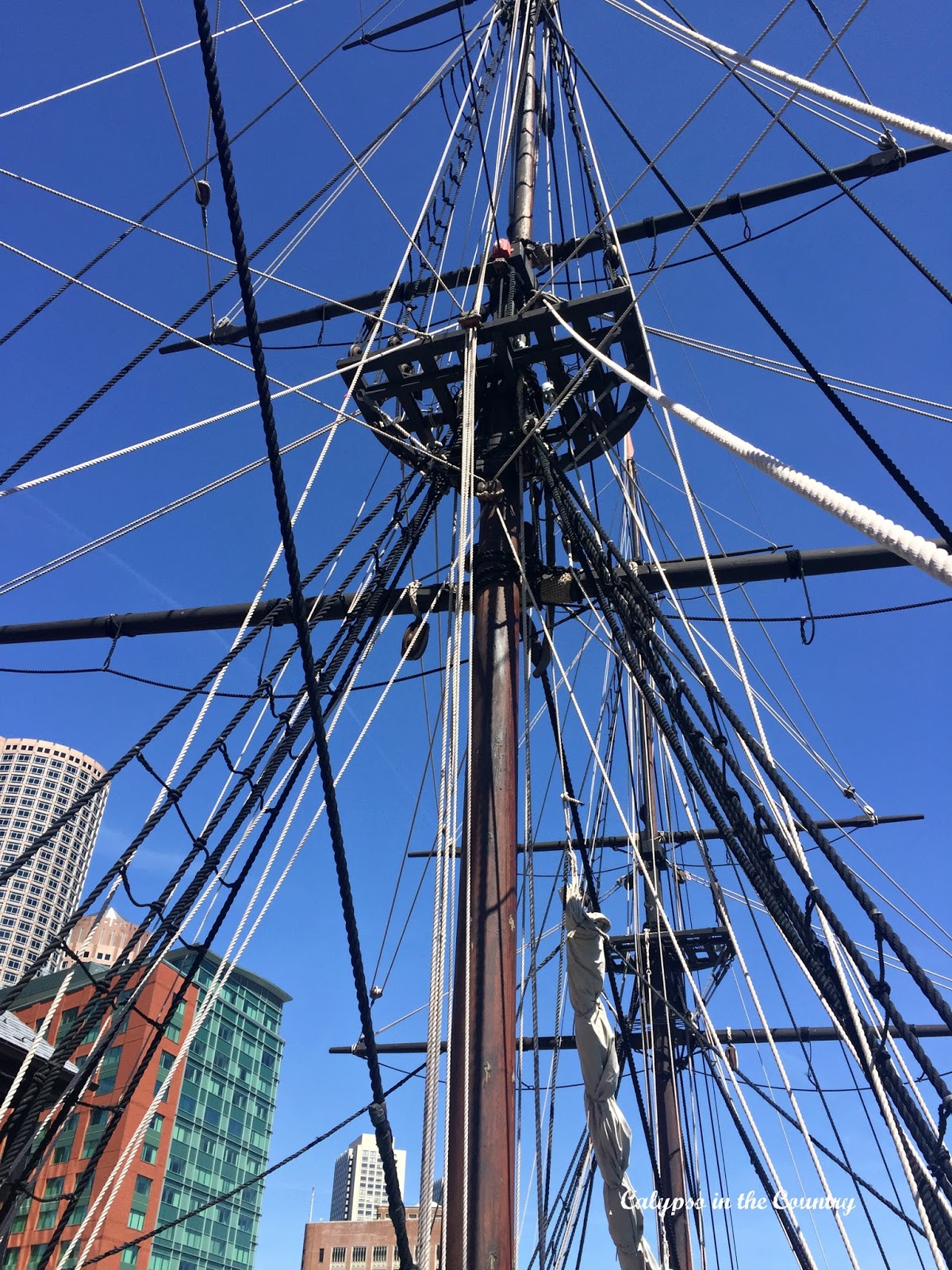 Afterward, we headed into the museum where we were able to view one of only two surviving tea chests from the Boston Tea Party and hear the story behind it..  While in the museum, we viewed a short film showing the events that led up to the American Revolution and wrapped up the tour with some fun exhibits.

All of us agreed, the hour long visit to the Boston Tea Party Ships and Museum was well worth it.  Not only were we entertained, but we got to feel what it was like to witness the events that led up to the American Revolution.  What a wonderful learning experience for the kids…and all of us!

Because it was such a beautiful day, we walked around by the harbor for awhile and then headed back to Faneuil Hall for some lunch. 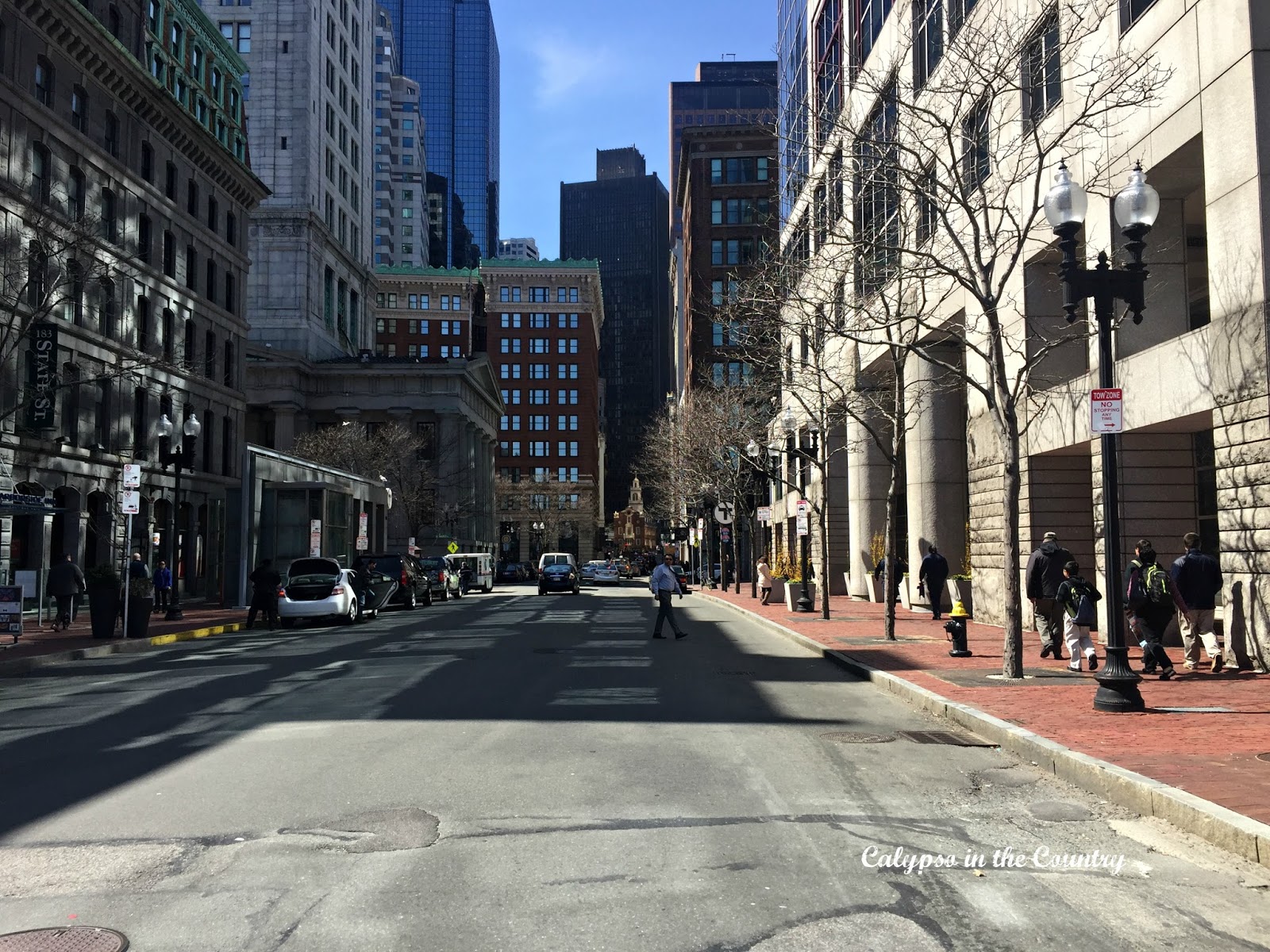 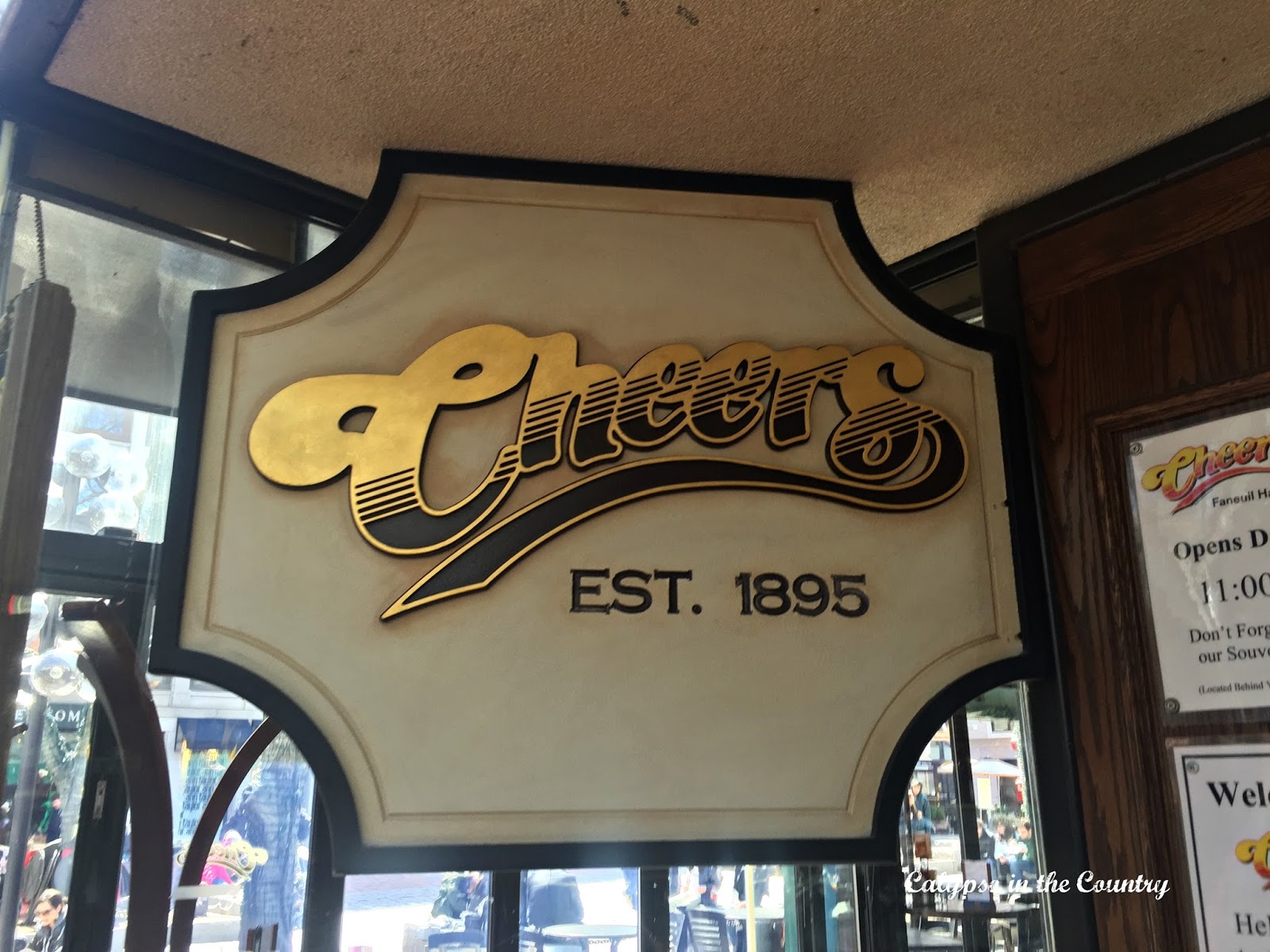 Of course, my kids had no clue about the show.  Obviously, they were not amused by any of the show-inspired names on the menu…or the cardboard figures outside the restaurant.  What a way to make me feel old… 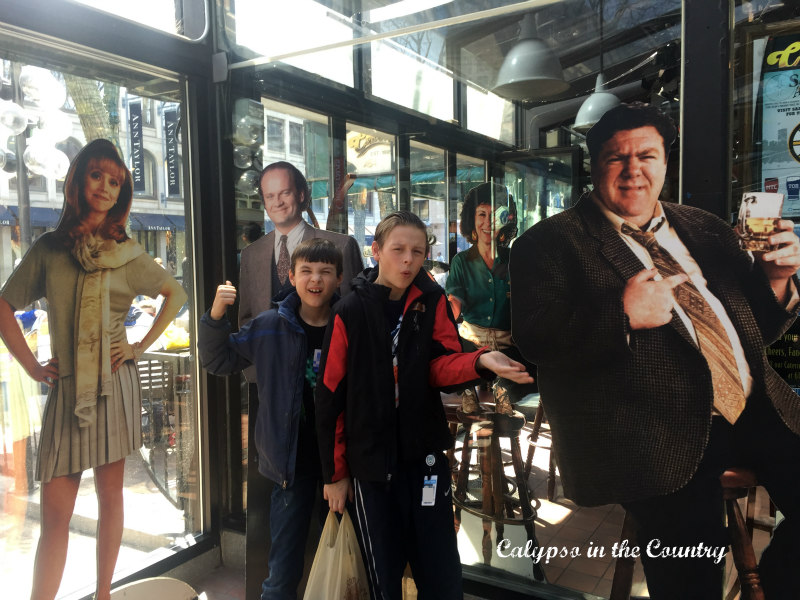 And that concludes our spring break trip to Boston!  We had such a fabulous time making memories with our kids!

In case you missed my first two days, you can click on the links below:

Here is a quick recap of where we stayed, played and dined…

If we had more time, here are a few things we would have done:

Do you have any Boston recommendations? 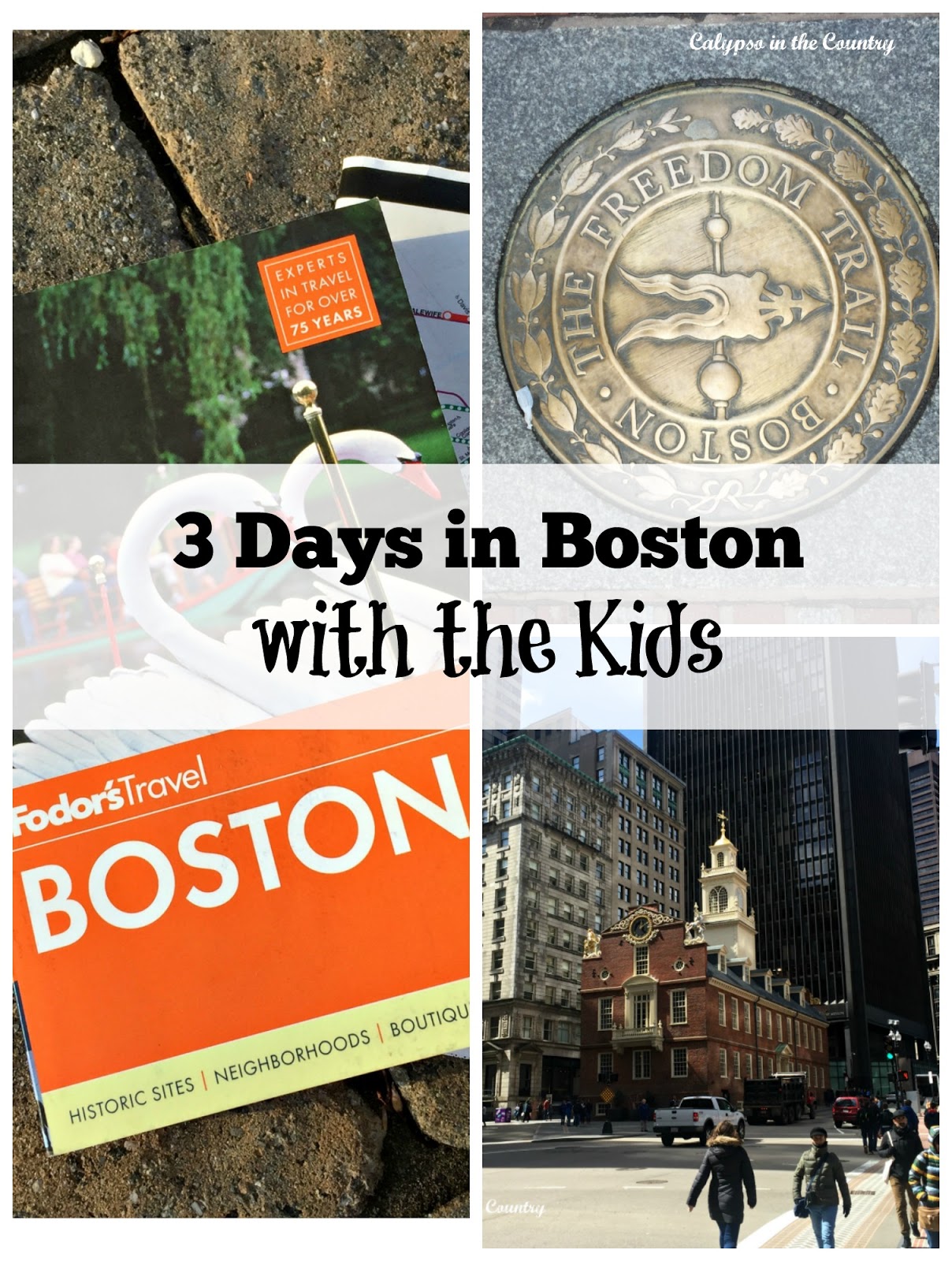 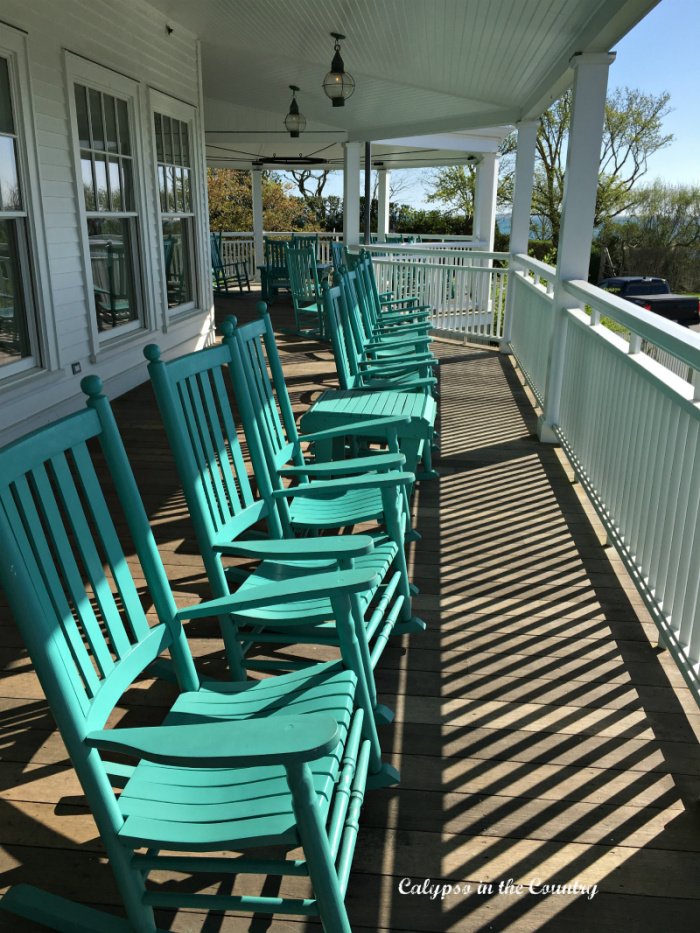 I already shared a recap of last year’s Girls’ Weekend in Martha’s Vineyard and now I will take you around the the main building of my new favorite hotel we stayed in… The Harbor View Hotel Just a few steps from the water in the charming town of Edgartown, sits the iconic Harbor View Hotel in Martha’s…

In my last post, I asked for your help in naming my new travel link party.  Thank you for all of your suggestions.  Almost all of you picked the name I had in mind from the start… (Photo taken in Turks and Caicos) The name of the new party will be Take Me Away! The…

Welcome to the first Take Me Away Link Party of 2017!  I am so excited for the new year and I am so excited to see where you have been! Let’s get started with this month’s party! Please link up to 3 travel posts you have written (new or old as long as you haven’t… 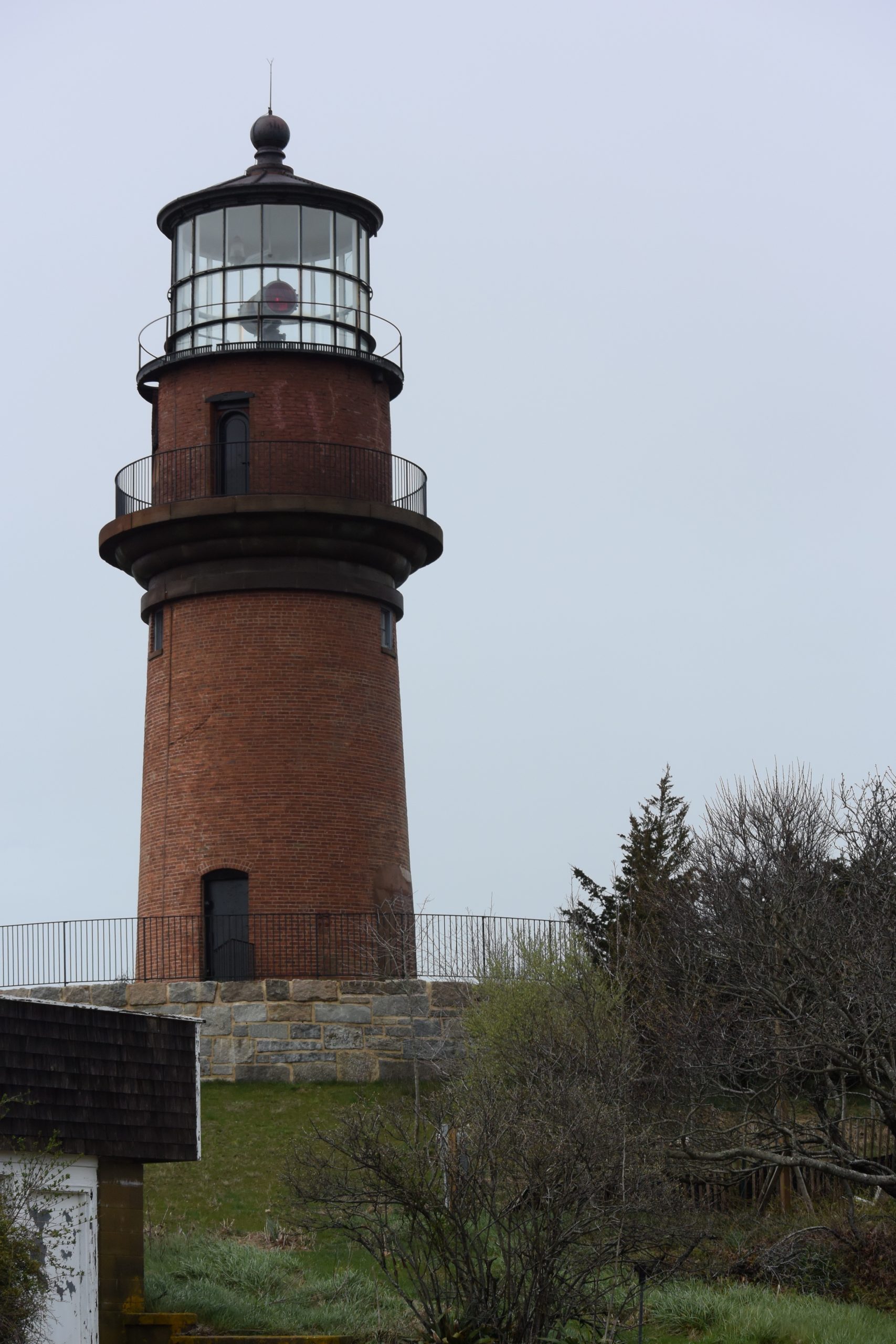 Does the new year get you in the mood to start planning a vacation?  Almost every year, I get together with a group of friends for a girls’ getaway. Last May, we spent a long weekend in Martha’s Vineyard, Massachusetts. I already wrote a post about the Kentucky Derby Party we attended there.  Also, I…

What the heck happened to May?  Seriously, was that not the fastest month ever?  My kids only have a few weeks left of school now, (In New Jersey we go through mid-June) but I know many of you are already in summer mode. If you have already done some traveling, we would love for you…

Happy June everyone!  It’s time for another Take Me Away Travel Link Party!  We can’t wait to see where you’ve been! Let’s get started with the June party! Please link up to 3 travel posts you have written (new or old – as long as you haven’t shared them at the Take Me Away Party…