As mentioned yesterday, my family and I spent three days in Boston last week.  Yesterday, I told you all about Day One and now it’s time for Day Two!

We began our Tuesday morning with breakfast in the Liberty Hotel’s restaurant, Clink where the jail theme continued.  The breakfast was delicious and the kids were thrilled I let them order chocolate chip pancakes.  They were also fascinated with the jail bars and spent the whole breakfast trying to determine how many jail cells were originally in the room. 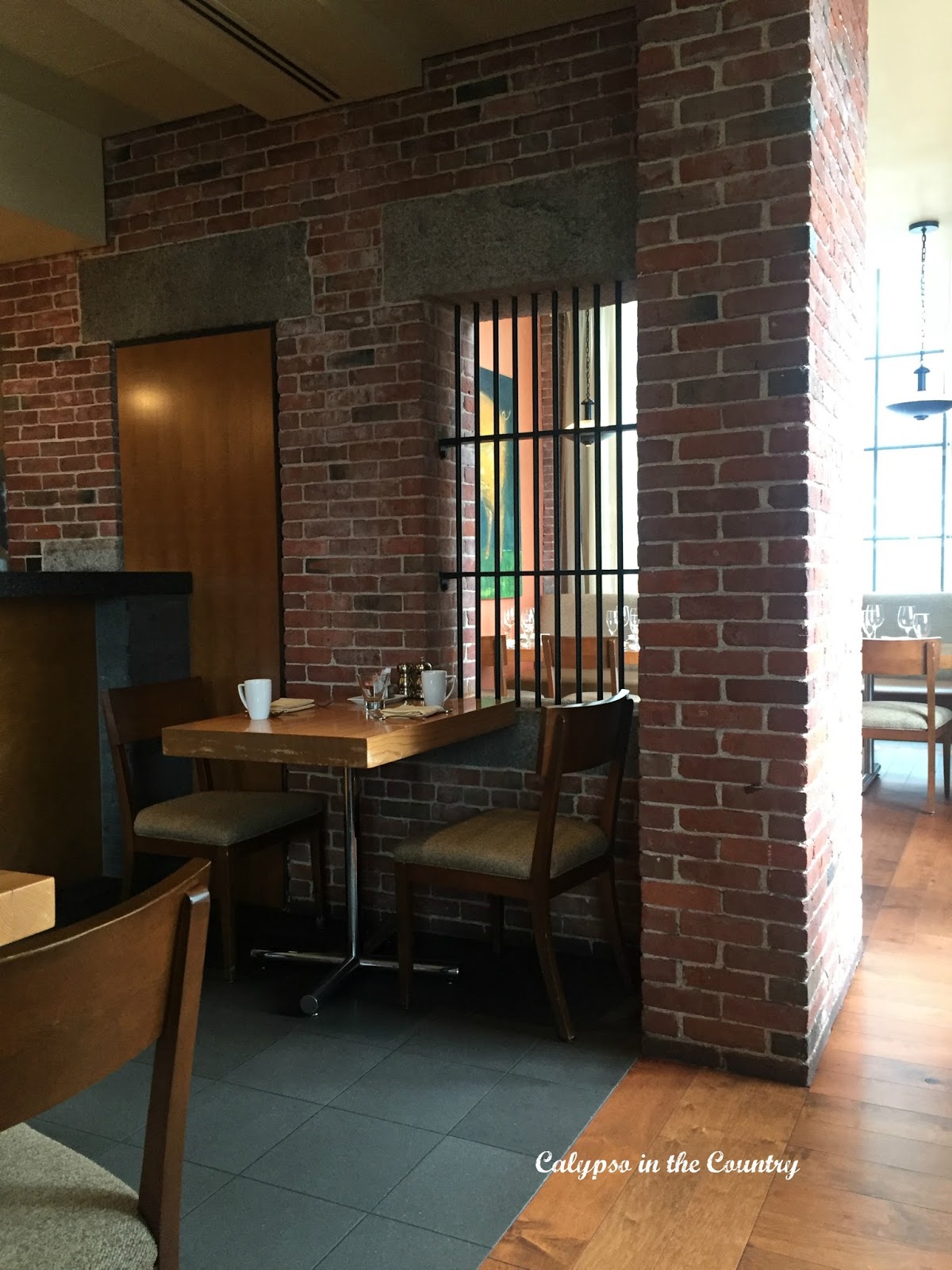 Then they of course, had to see them up close… 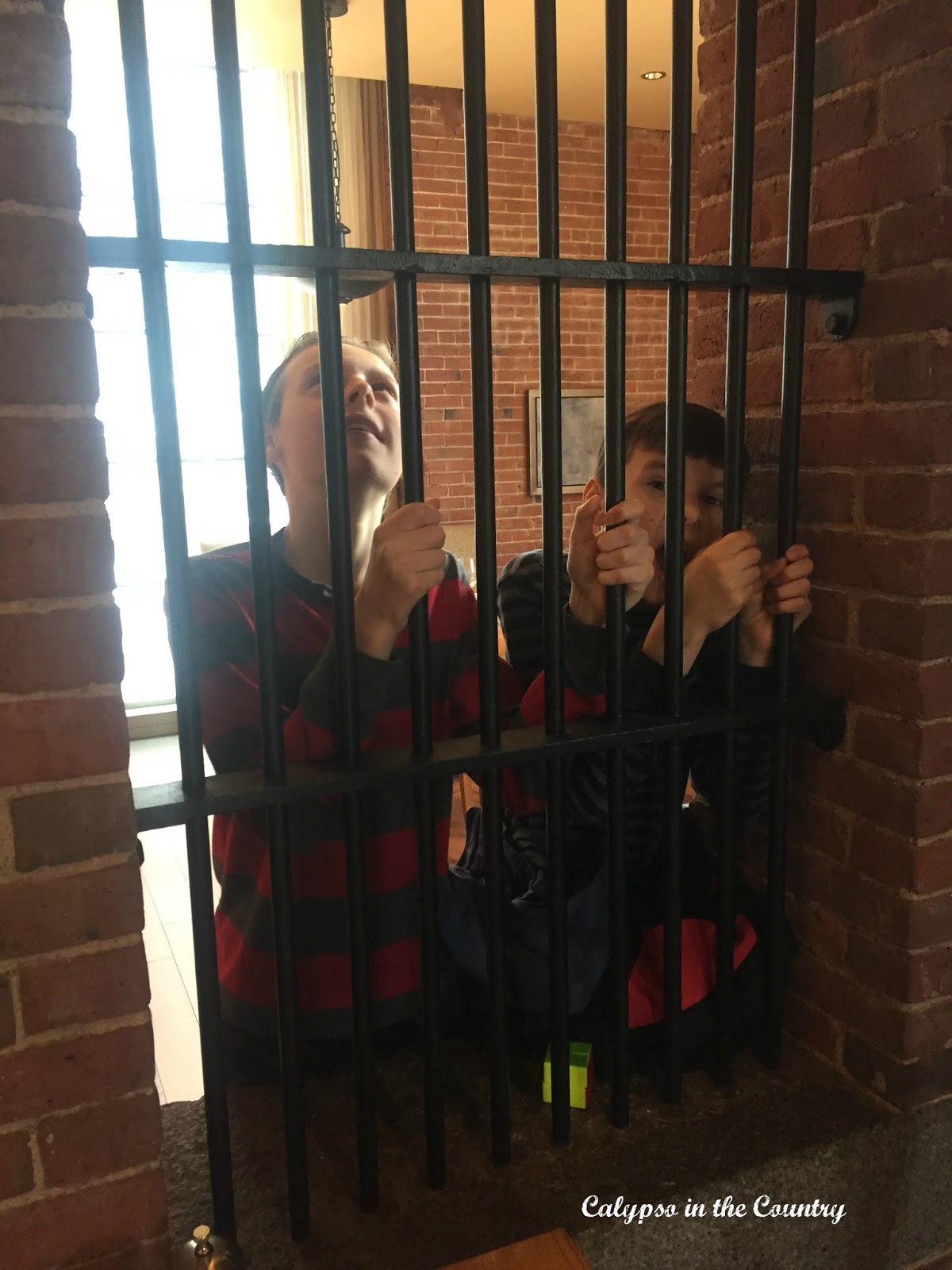 Let’s hope this is the only time my boys are behind bars!

With the train station directly in front of our hotel, I insisted we learn how to navigate the city using public transportation.  My kids are definitely not “city kids” so I thought it was important to expose them to this way of travel.  Plus, they love trains so how could I go wrong!  The MBTA trains in Boston, also known as “The T” consist of elevated railways and subways.  That morning we hopped on by our hotel and took “The T” just one stop to “Park” which was where we planned to begin our first activity of the day…The Freedom Trail! 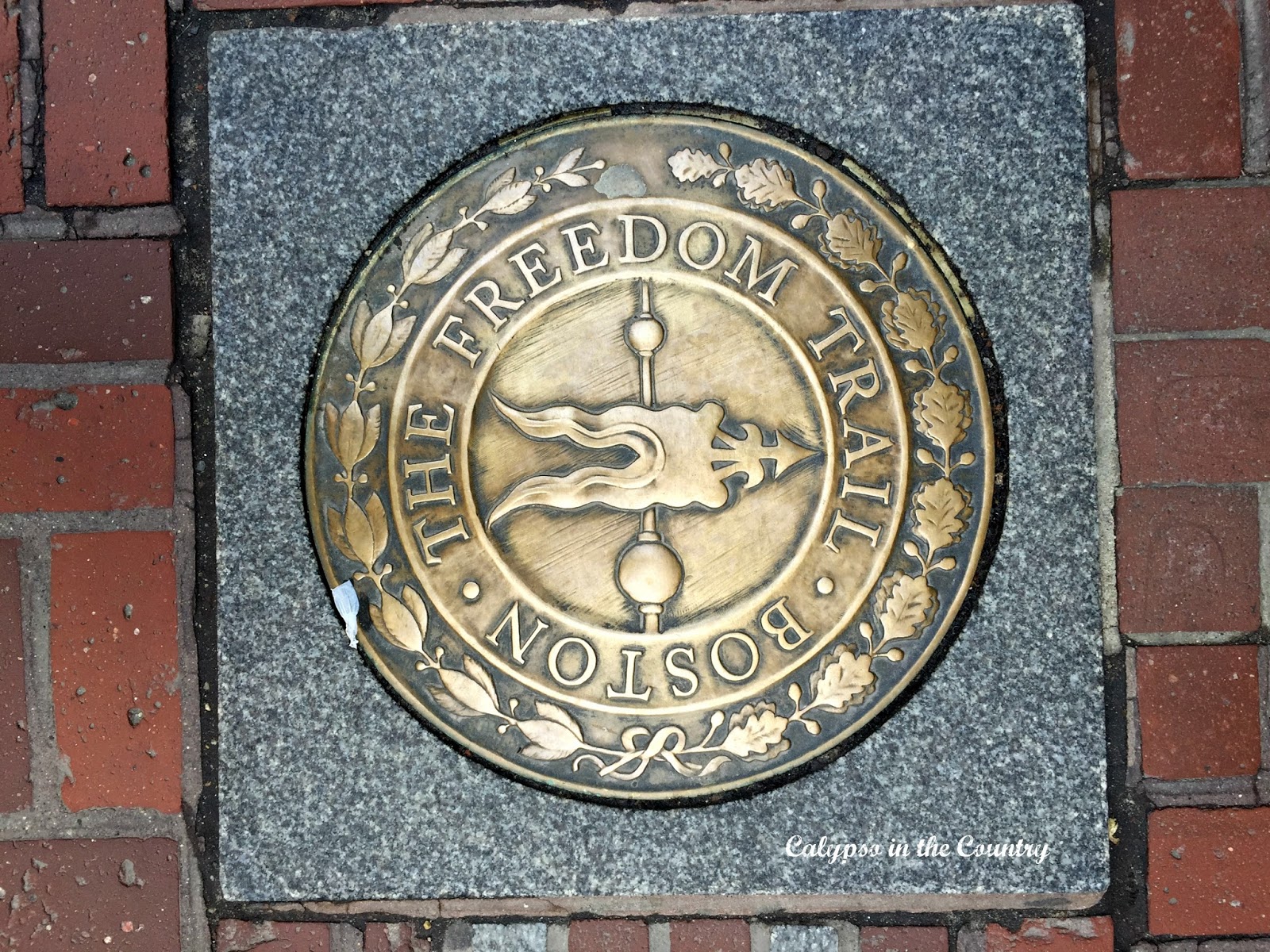 The Freedom Trail is a 2.5 mile red brick path that leads you to 17 historic sites throughout the city of Boston.  You can take the walk with a tour guide or follow it on your own.  We chose to grab our map and follow it on our own.  I always like to play tour guide anyway!

My kids have studied American History in school and were familiar with some of the names and events highlighted.  Just to be sure though, we did a little ‘studying’ in the car ride up the day before.  No, we did not bring any history books.  I tried to make it a little fun for them.  I actually loaded an app called Freedom Walk to my phone before we left.  During our 4 1/2 hour car ride I would pull out my phone every now and then and say, “Ok, stop number one, Boston Common!”  Then I would hand my phone to one of the boys and they would have to read the little blurb about that location out loud.  Then I would ask them a couple questions to make sure they were paying attention.  If it was a really interesting site, I would then pull out my Boston guide book and fill them in with a few more details.  Then we would go back to listening to the radio or playing on their screens for awhile.  With 17 stops on the Freedom Trail, taking these mini study breaks along the way gave us something to do (besides play video games!)  I think they would actually look forward to learning about the next stop.  The best part was that they remembered many of the facts when we actually walked the Freedom Trail!

We started with our map and app at the first stop in Boston Common (the oldest city park in America) and followed the red brick line throughout the city.  It was fun but would have been much better if it wasn’t so cold and windy! 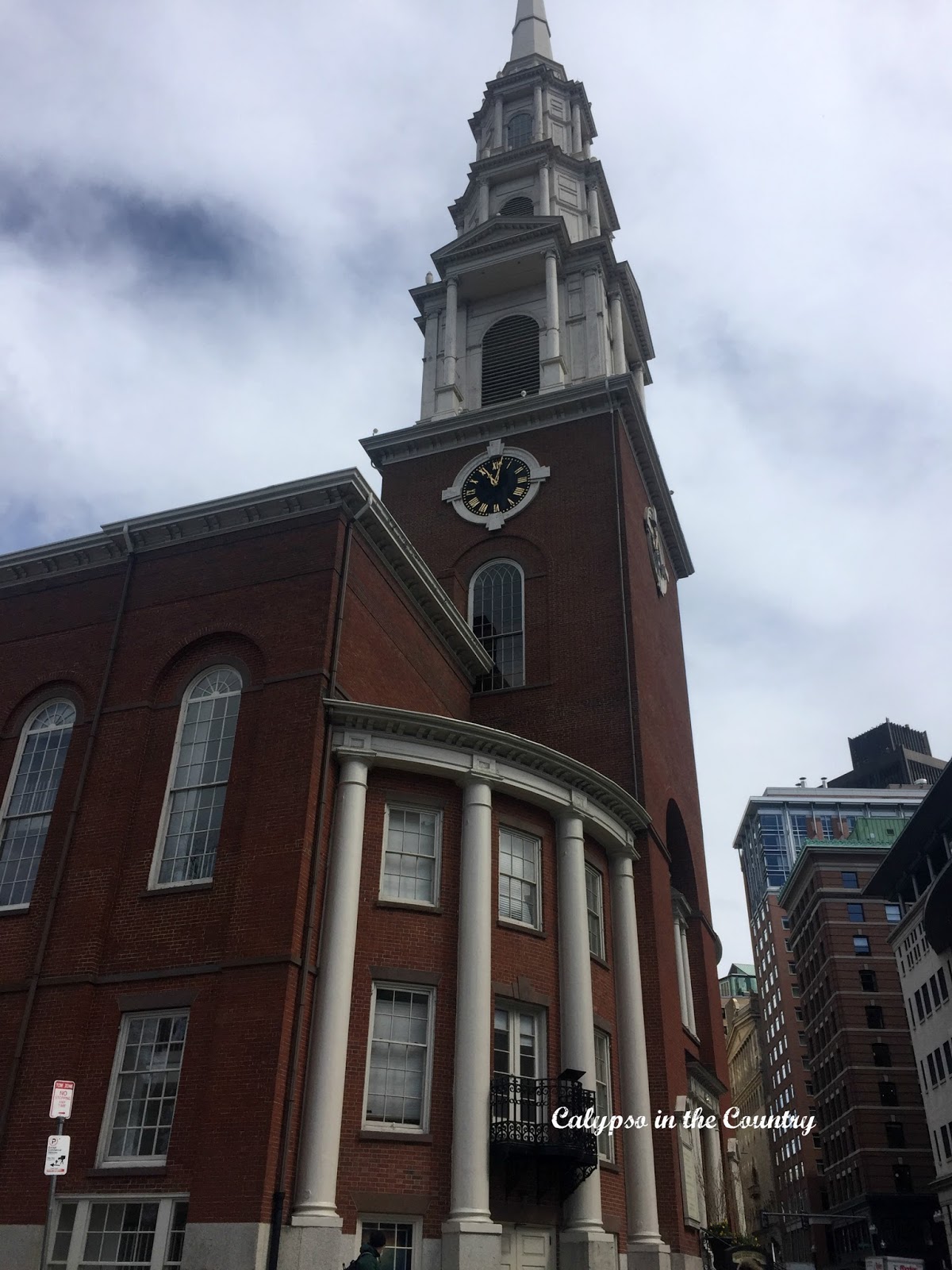 Most of the sights were outside but you could pay a fee to tour inside a few buildings.  With the less than ideal weather, we looked forward to the inside ones! 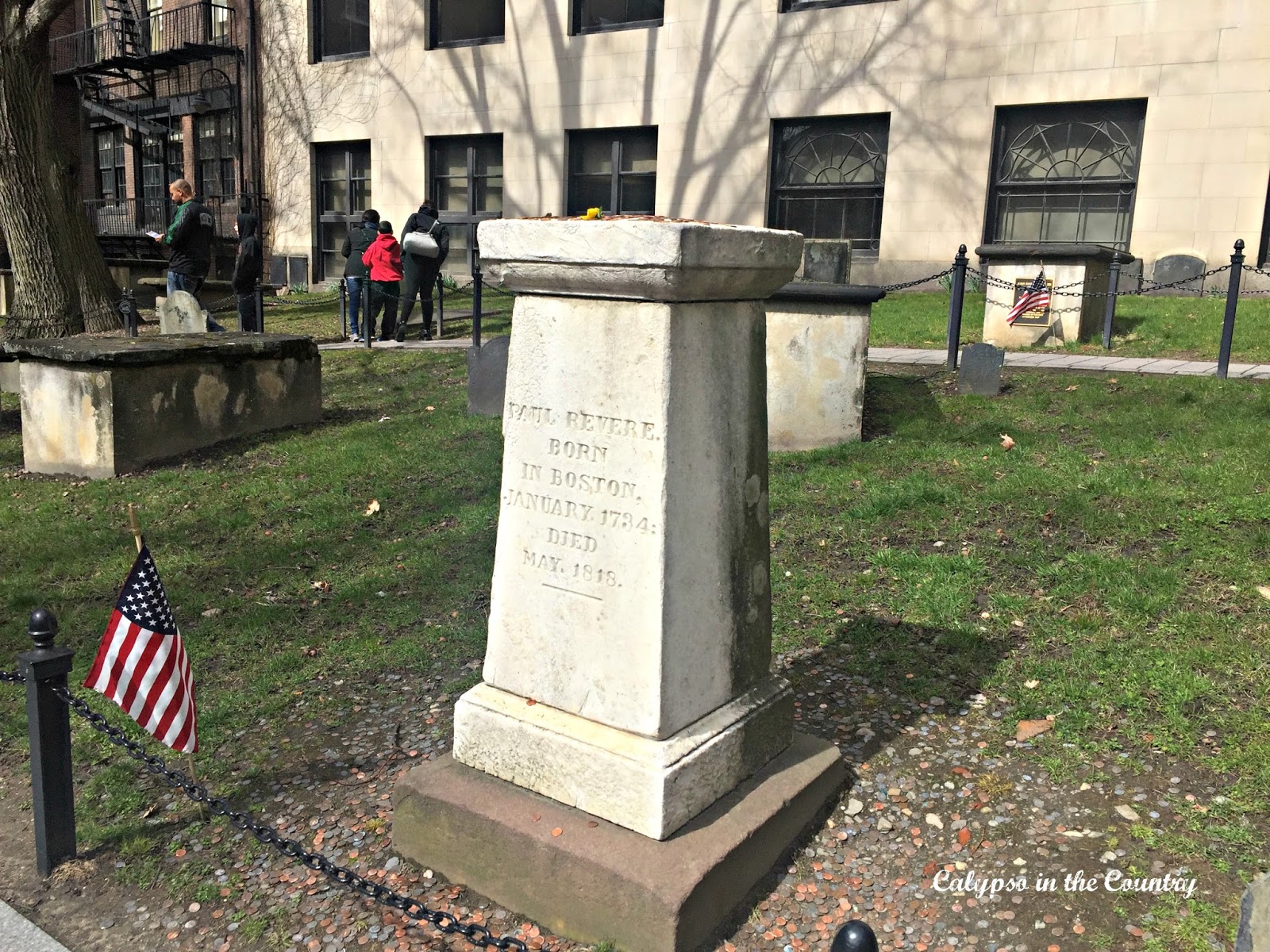 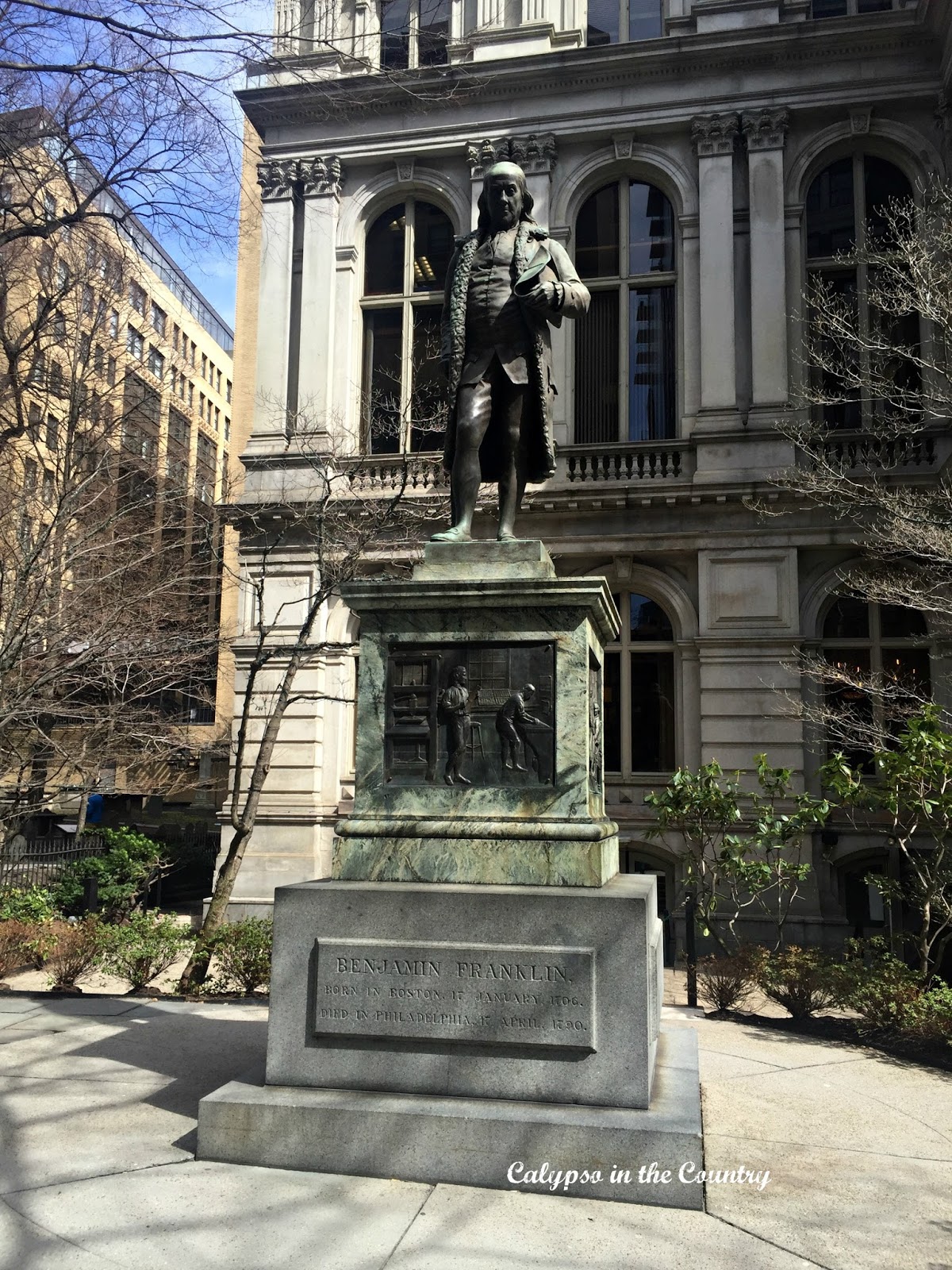 The Benjamin Franklin statue overlooks the site of the first public school in America. 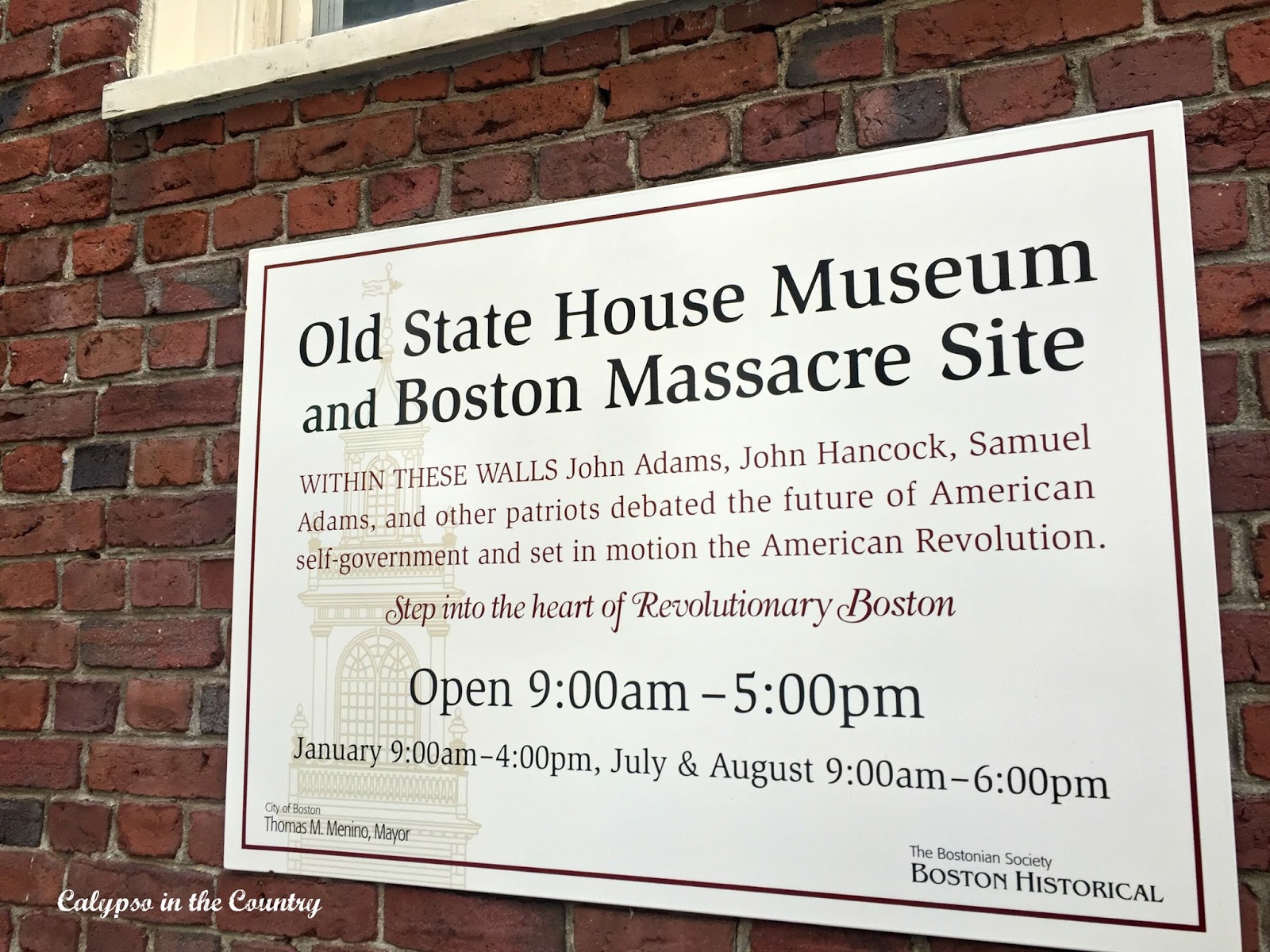 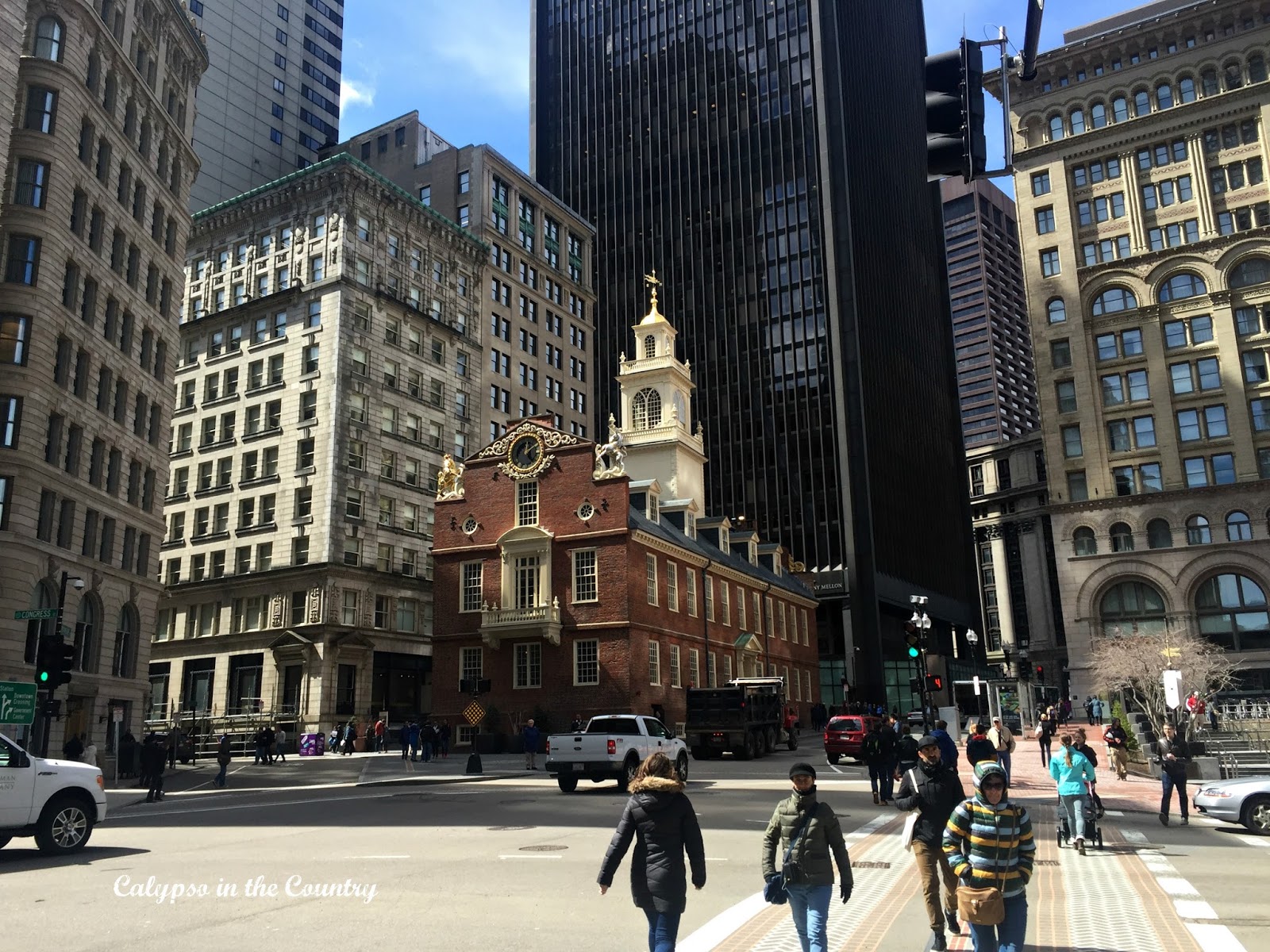 The Old State House is my favorite building in Boston because of how it sits in the middle of all the modern skyscrapers.  I just love the contrast.  We actually toured the inside of that one and loved seeing all the artifacts. 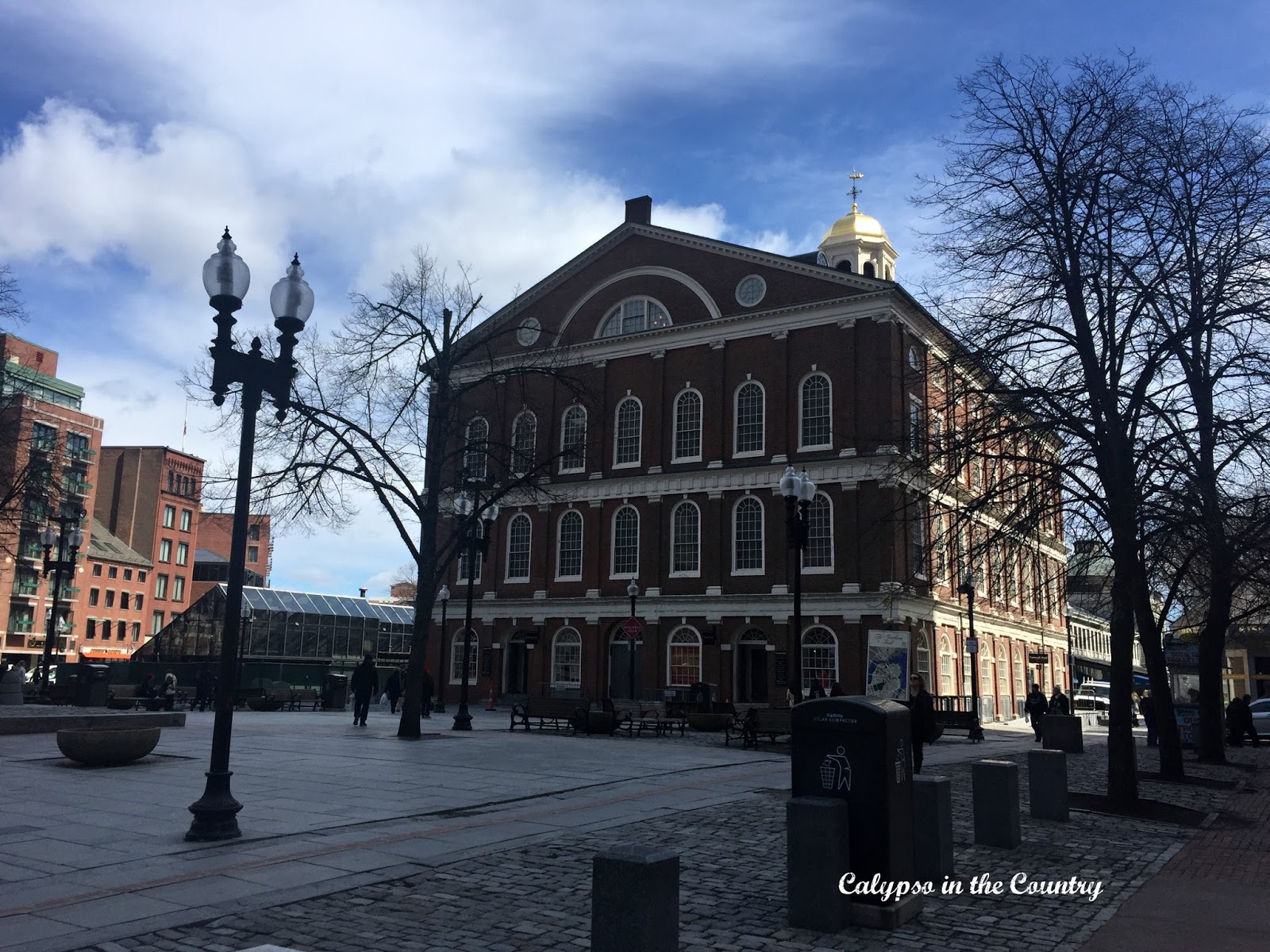 The boys were excited when we approached Faneuil Hall (Stop #12) but not because of its historical significance or because of all the famous people like Samuel Adams who have given speeches here.  My boys just knew that the Faneuil Hall stop meant lunchtime! 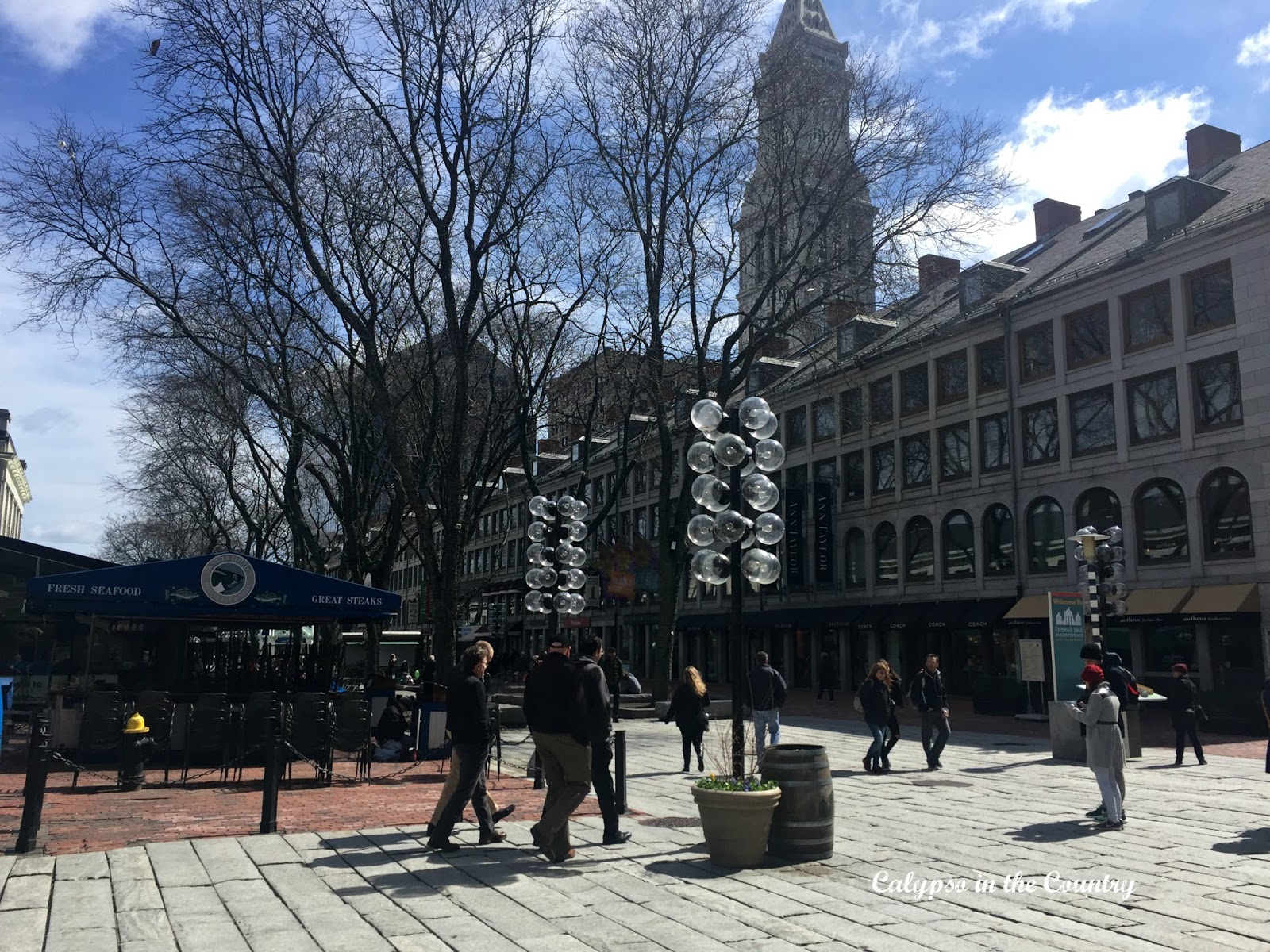 Faneuil Hall Marketplace is an indoor-outdoor shopping center filled with restaurants and fabulous shops.  I think everyone who comes to Boston stops at Faneuil Hall at some point.  You really could spend all day there! 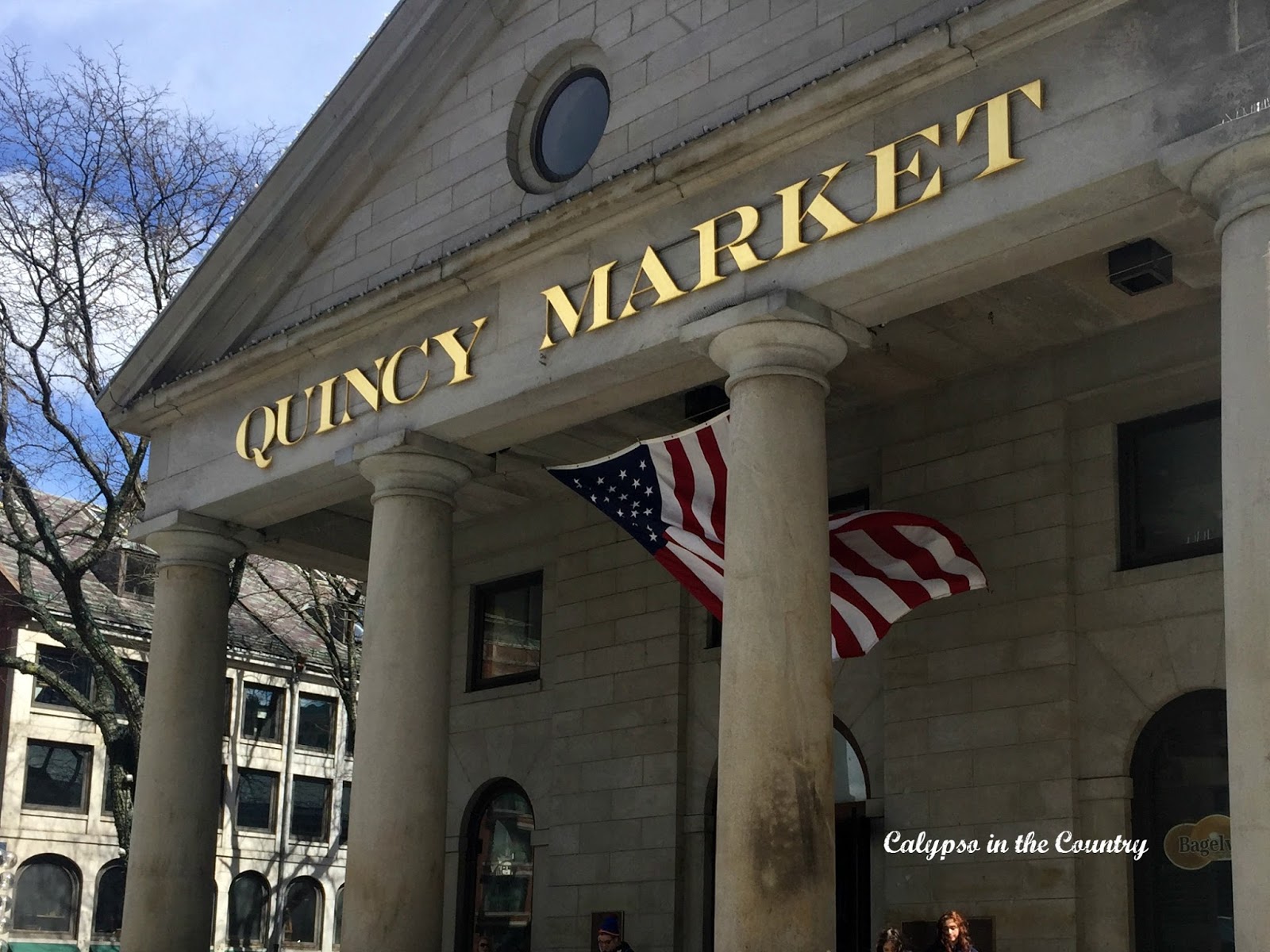 One of the buildings, Quincy Market has a huge selection of cafes and eateries to choose from… 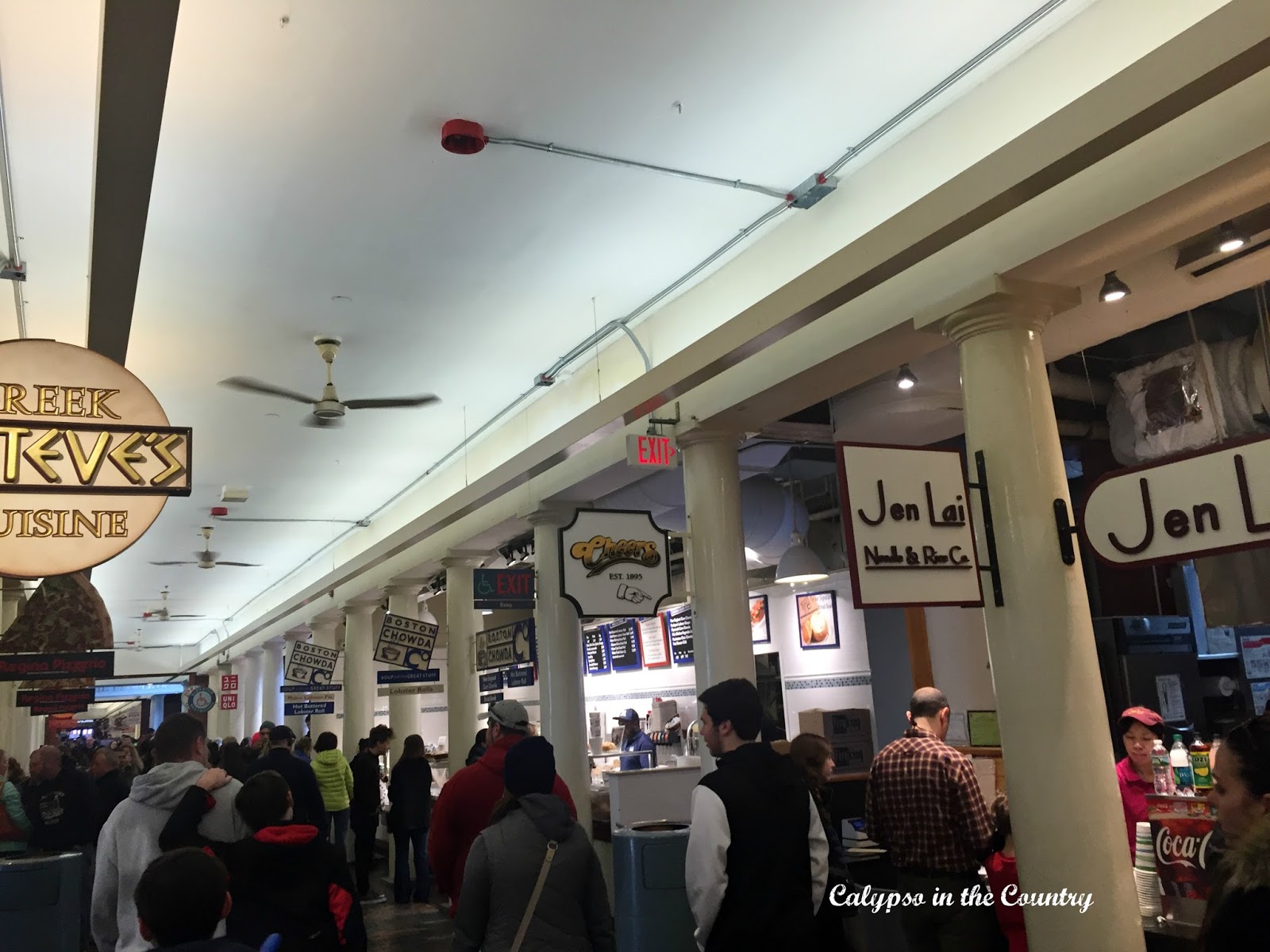 You definitely have your choice of food in there!  We actually ended up eating in a sit-down restaurant around the corner called, Clarke’s.  It was a cozy little pub with great clam chowder and nachos.  Yes, we had clam chowder every chance we had while in Boston!

We still had a handful of stops left on the Freedom Trail but since the New England Aquarium was so close by, the boys (and my husband) voted for that instead!  What can I say, I was outnumbered!  Being inside and sheltered from the wind sounded a little more appealing anyway!  So off to the aquarium we went! 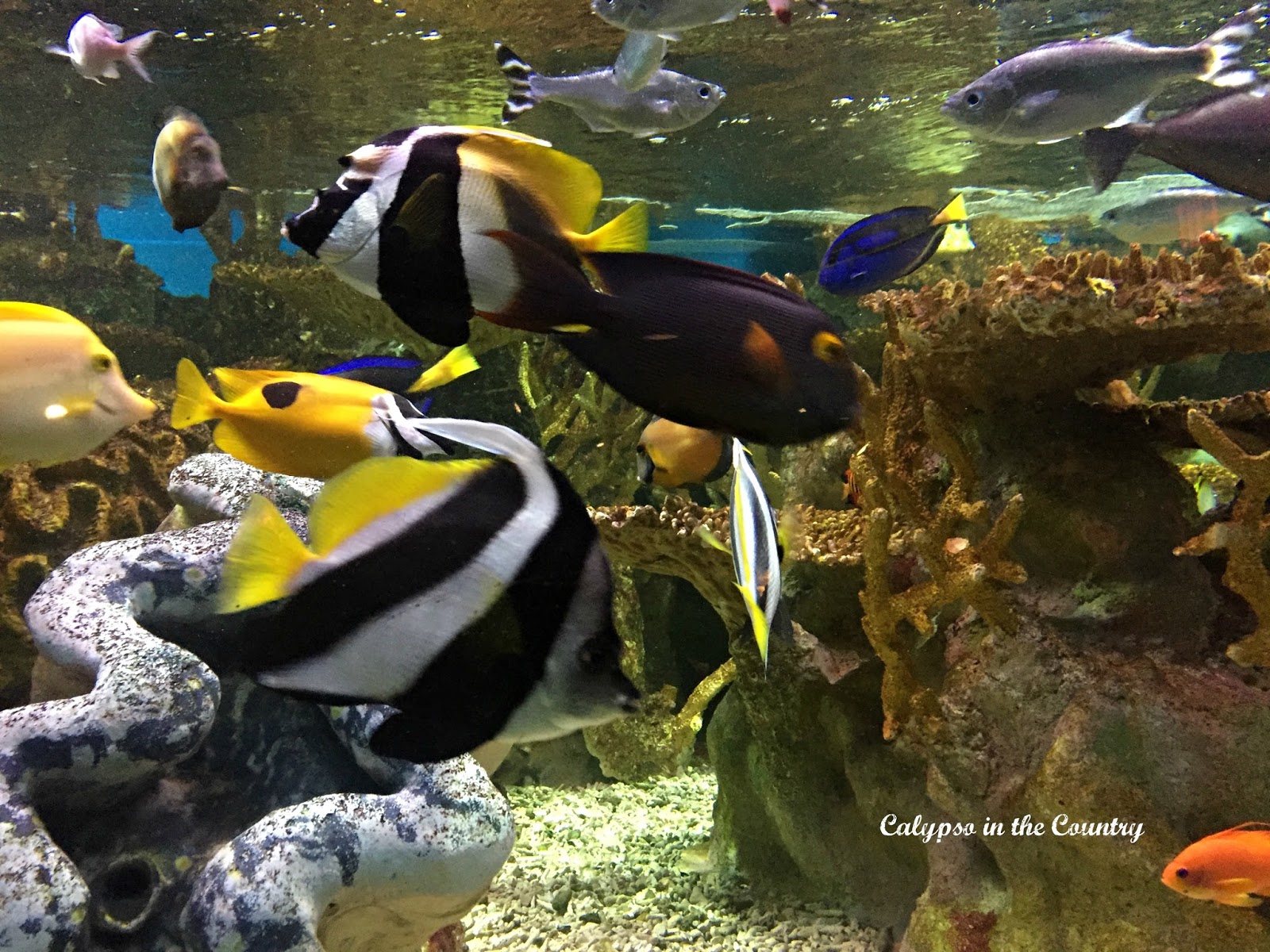 We really lucked out.  I think Massachusetts had a different spring break week than we had because we really didn’t encounter any crowds anywhere.  I remember being in Baltimore a couple years ago and we had to wait 45 minutes to get into the aquarium.  No problem this time.  In fact, this aquarium was practically deserted!  Even the Imax Theater was empty!  We ended the afternoon there watching the 3D whale movie.  It was nice to sit and relax for awhile.

We boarded a series of trains/subways back from the aquarium to the hotel and I patted myself on the back for figuring out which ones to take without getting lost.  I think I am ready to move to Boston!

Actually, if I were to pick a city to live in, this would definitely be on my list!  After arriving back at the hotel, the boys decided to exercise in the hotel gym.  I decided my exercise would be to walk through Beacon Hill and explore! 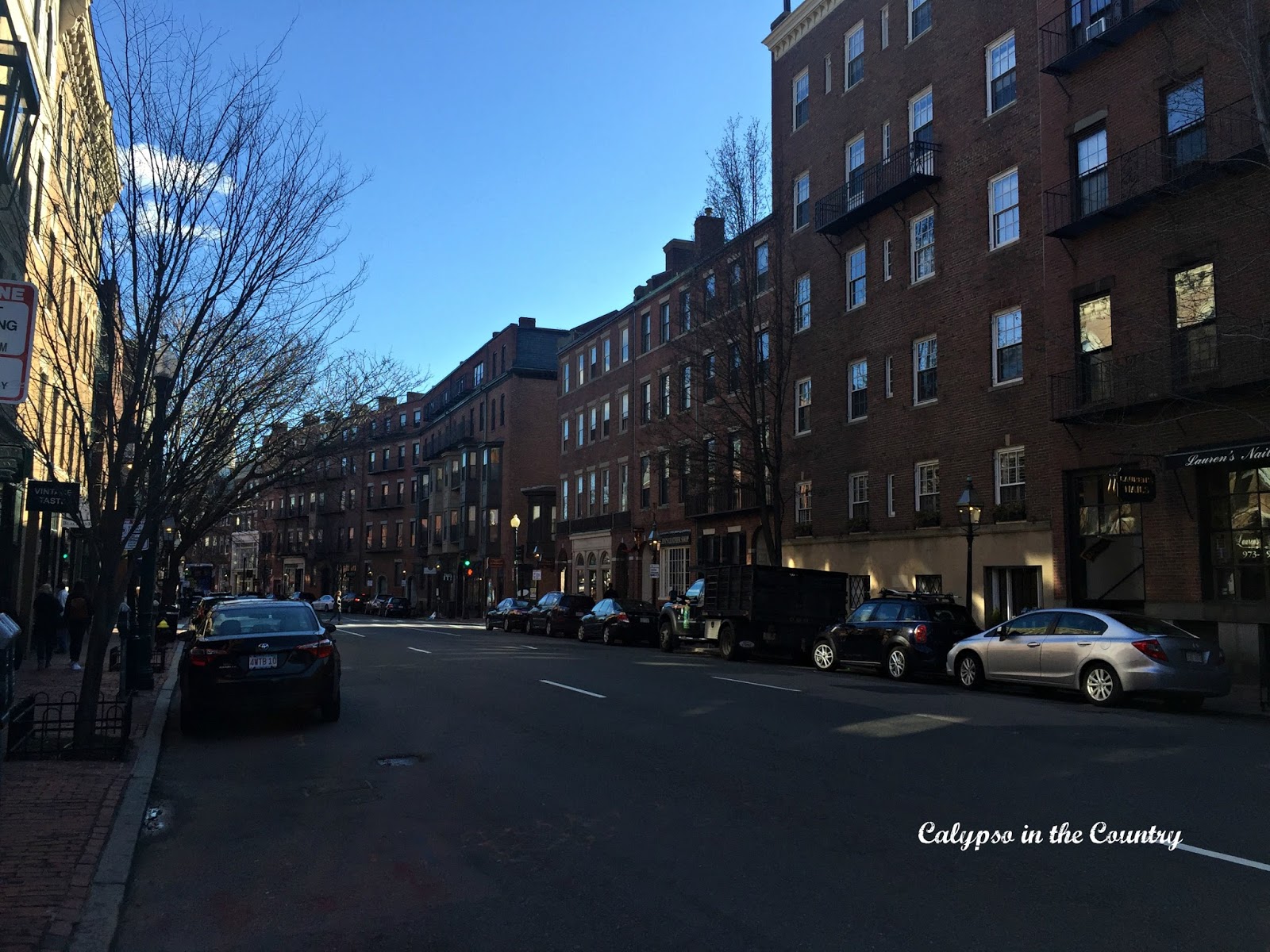 Like I mentioned in my last post, Charles Street is right by our hotel and is filled with beautiful buildings and charming boutiques. 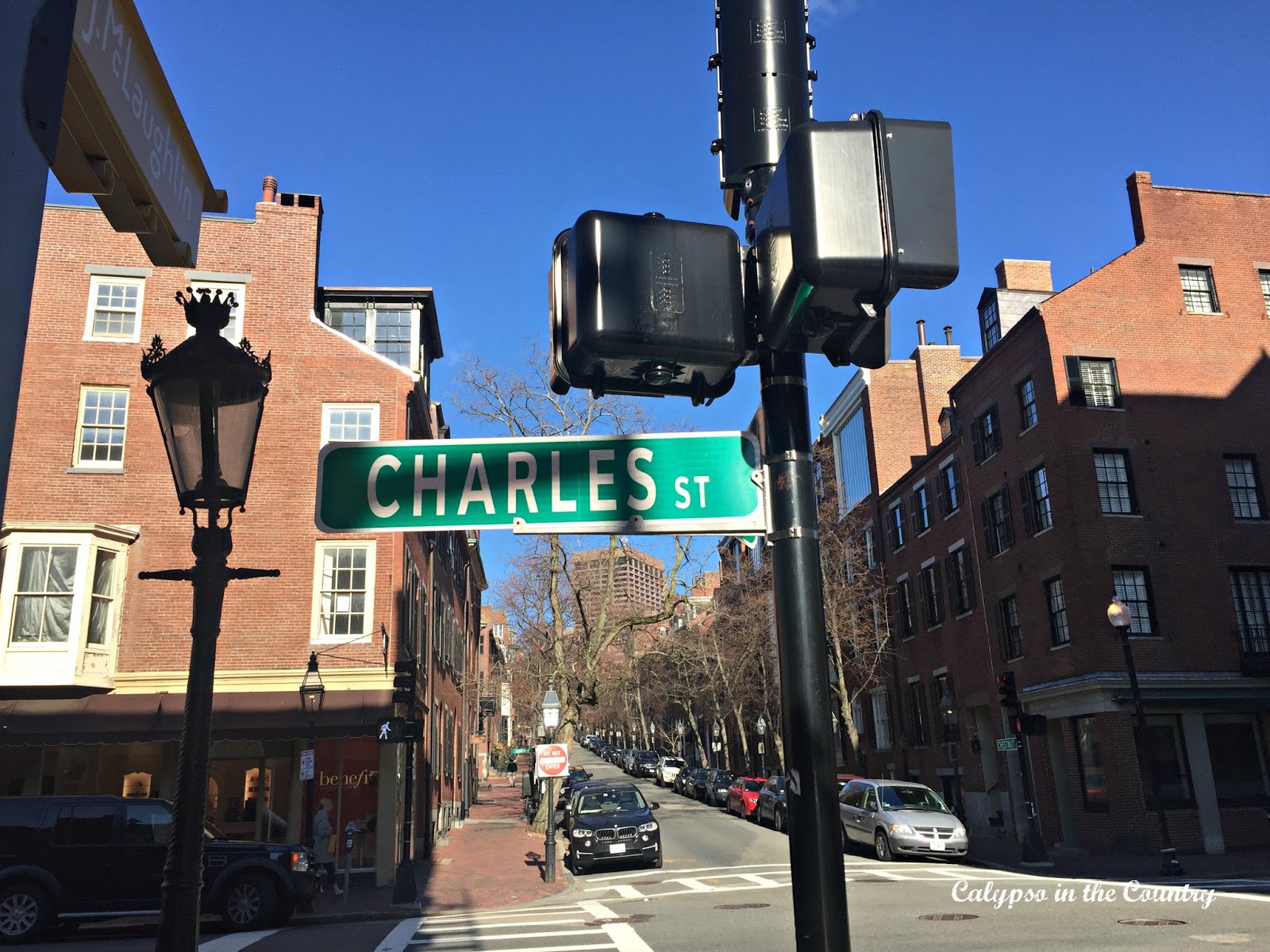 I strolled along admiring the pretty streets and elegant row houses. 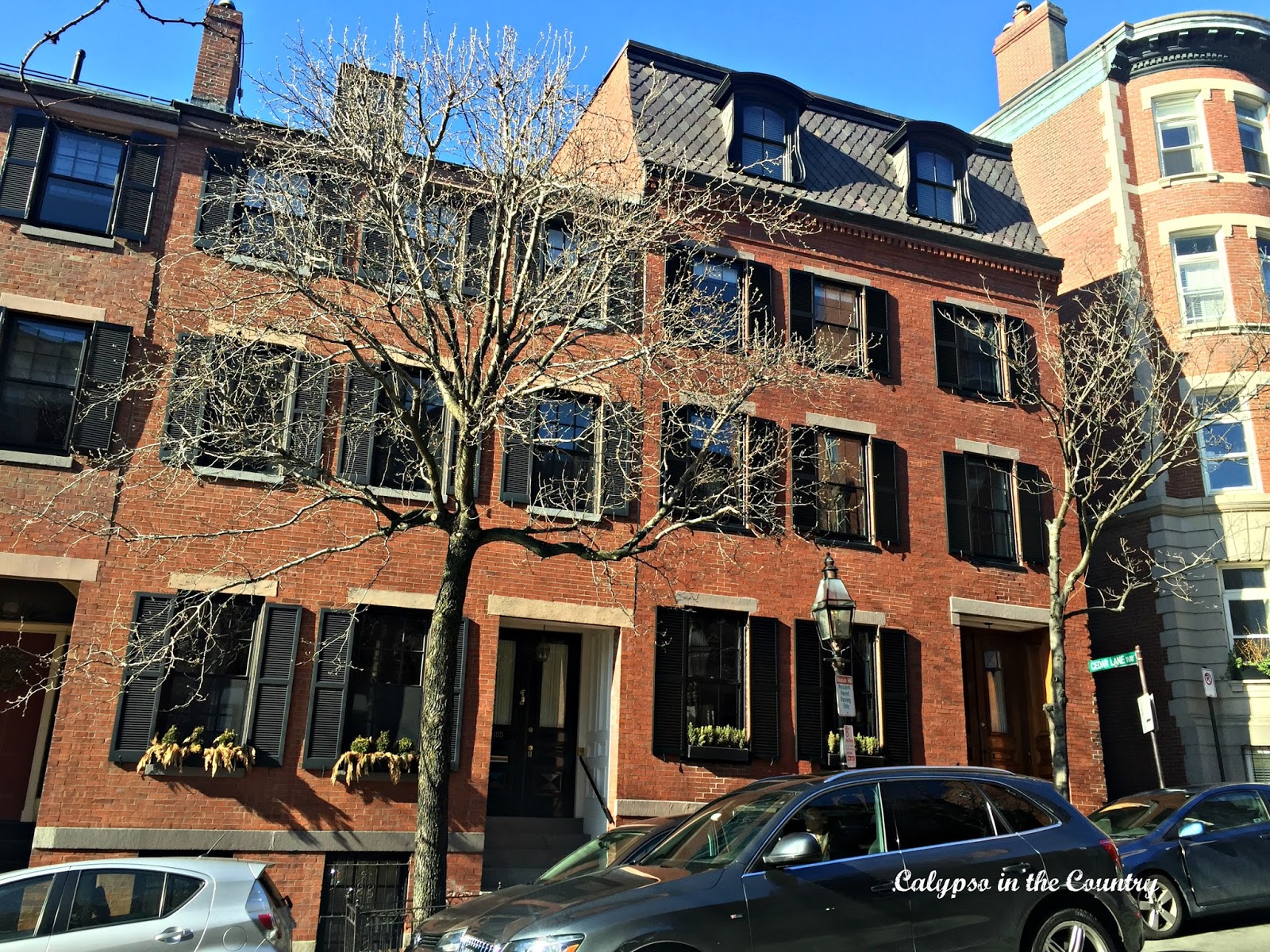 Yes, I could live in Boston. 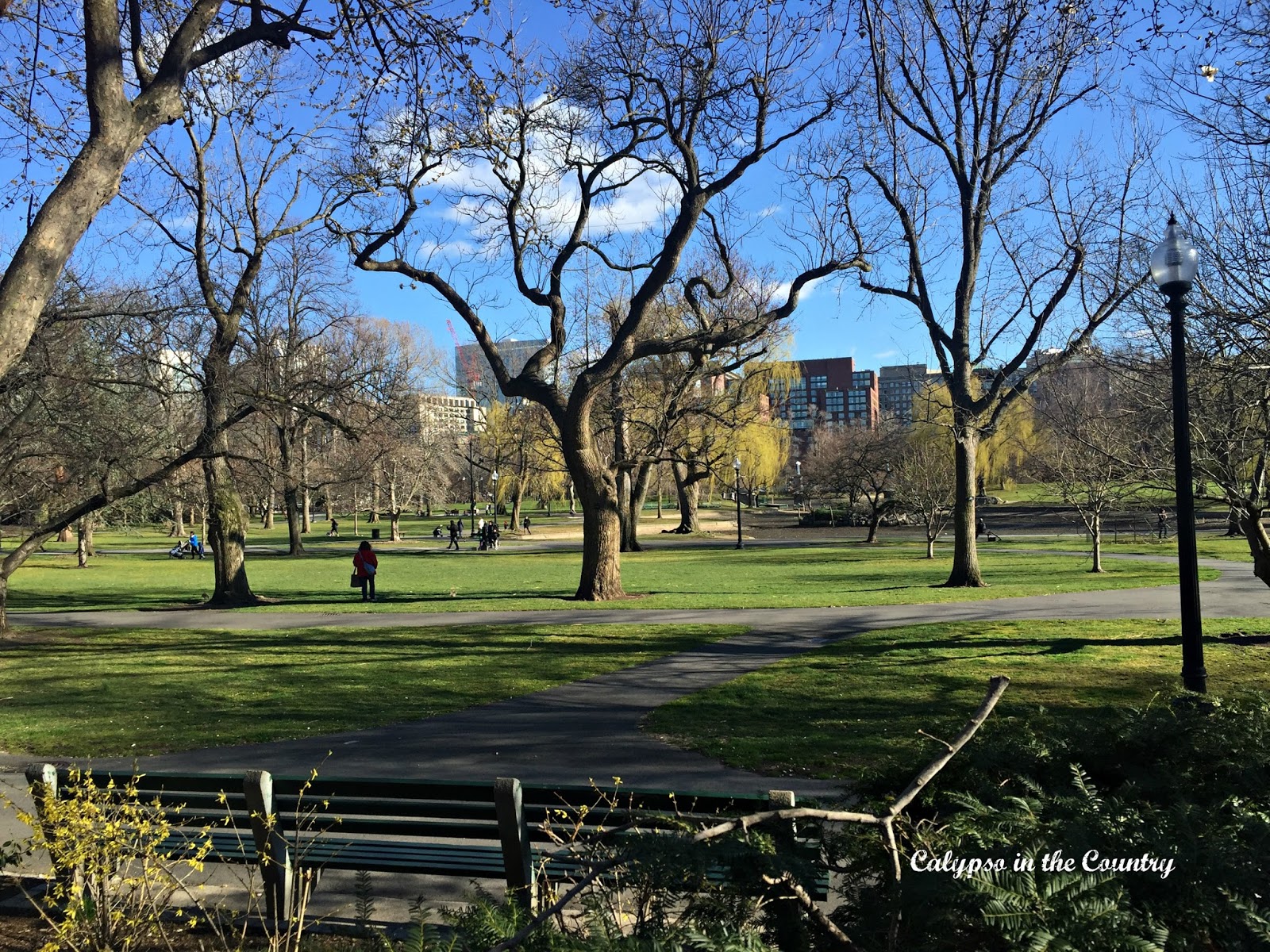 I continued on to the Boston Public Garden, a lovely park across the street from Boston Common where we started our Freedom Trail walk earlier in the day. 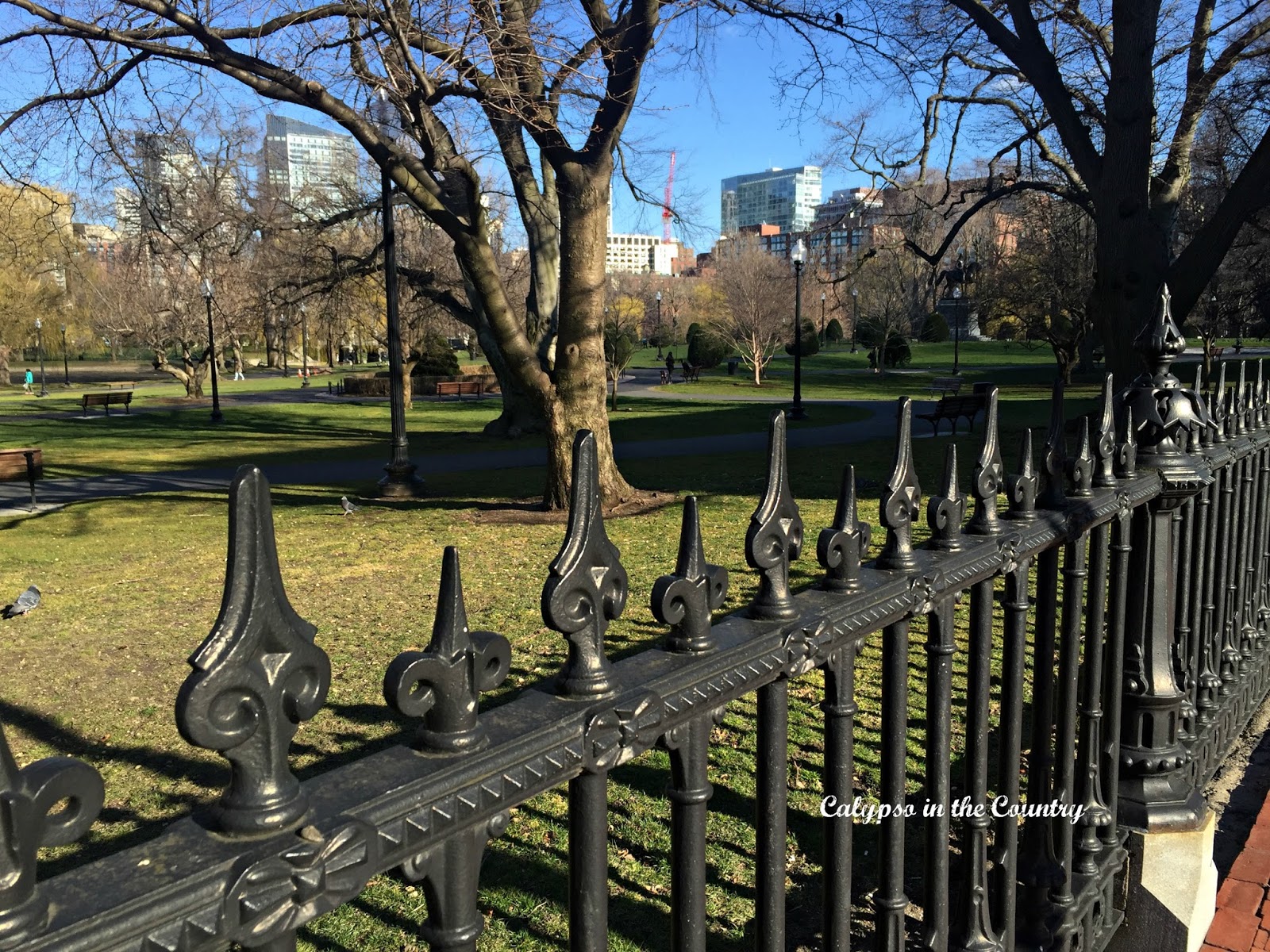 The trees were just started to bloom but I would love to come back when everything is green and full of flowers!  I remember being here years ago and it was just beautiful! 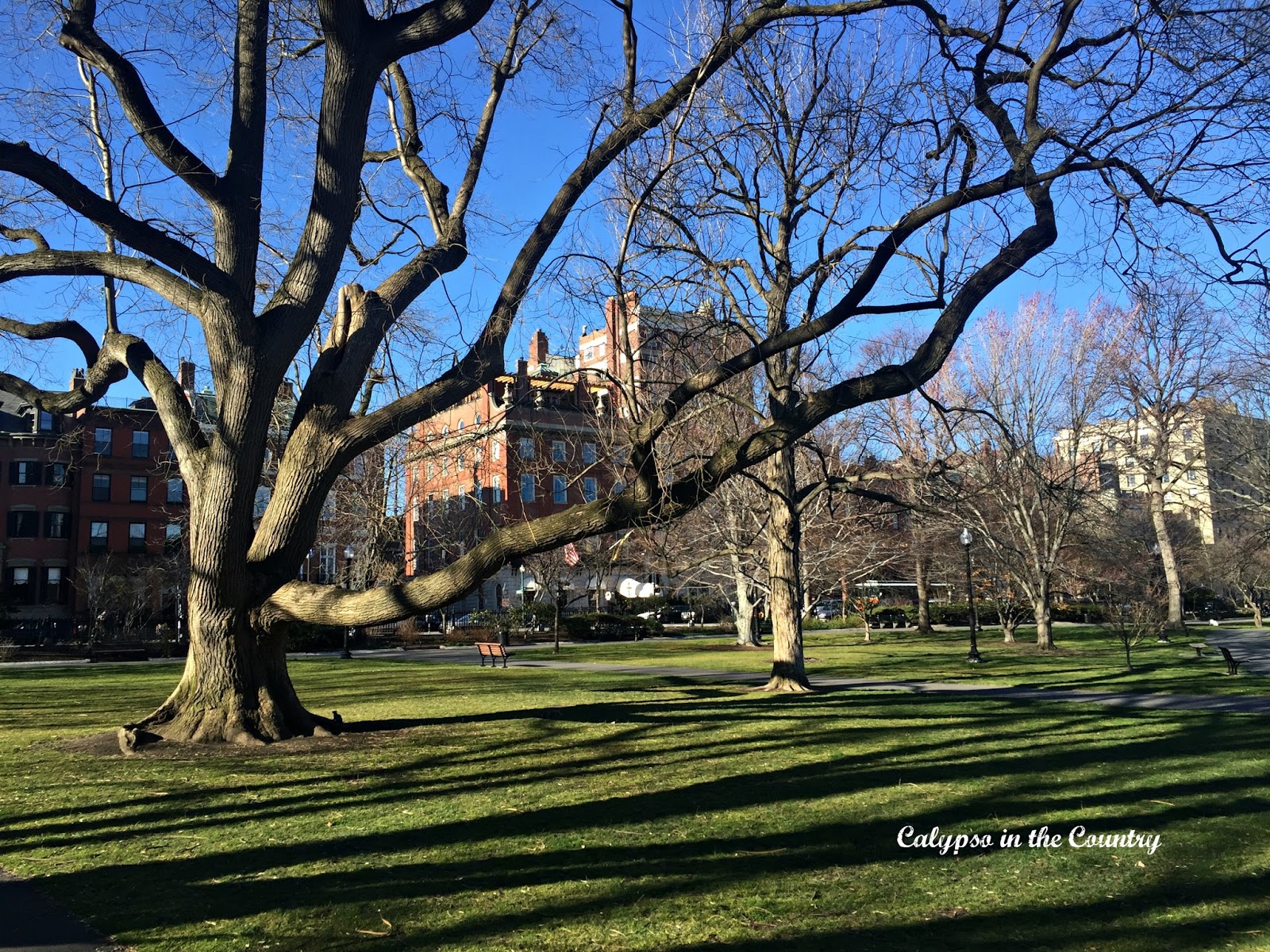 The wind had died down by this point so I was able to enjoy my walk through the park. 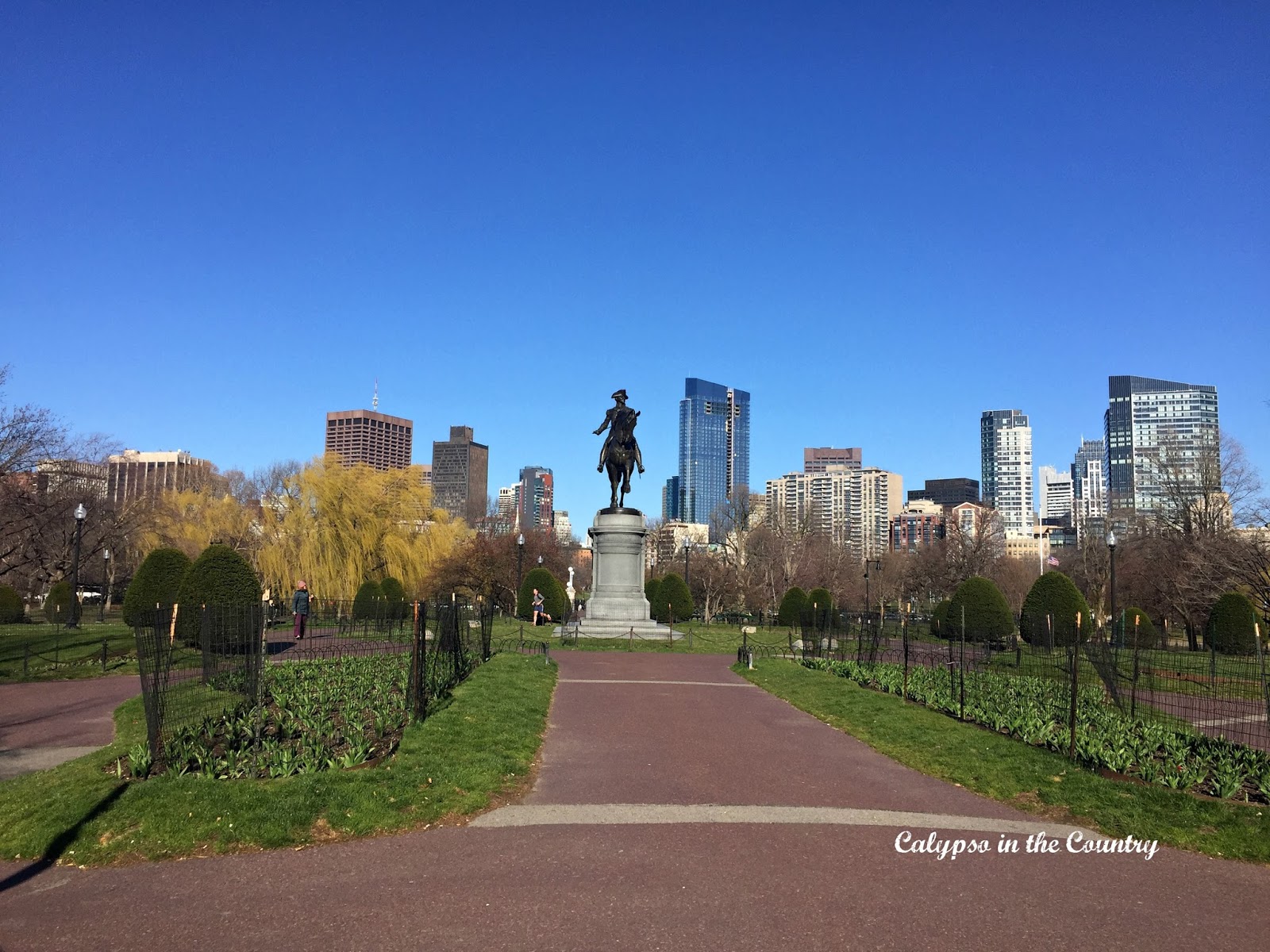 I love this view with the skyline in the background.

For dinner that night, we took a taxi to a Back Bay neighborhood restaurant, Atlantic Fish Company.  Another excellent choice for dinner!  The restaurant was loud and bustling with a festive energy which was perfect for a night out with a group of people – or kids!

My husband and I had a hard time deciding among all the tempting choices on the menu.  We of course, both chose fish entrees which were so good we couldn’t decide which one we loved more!  The kids opted for pasta and chicken for their entrees but started with clam chowder served in bread bowls – always a hit! 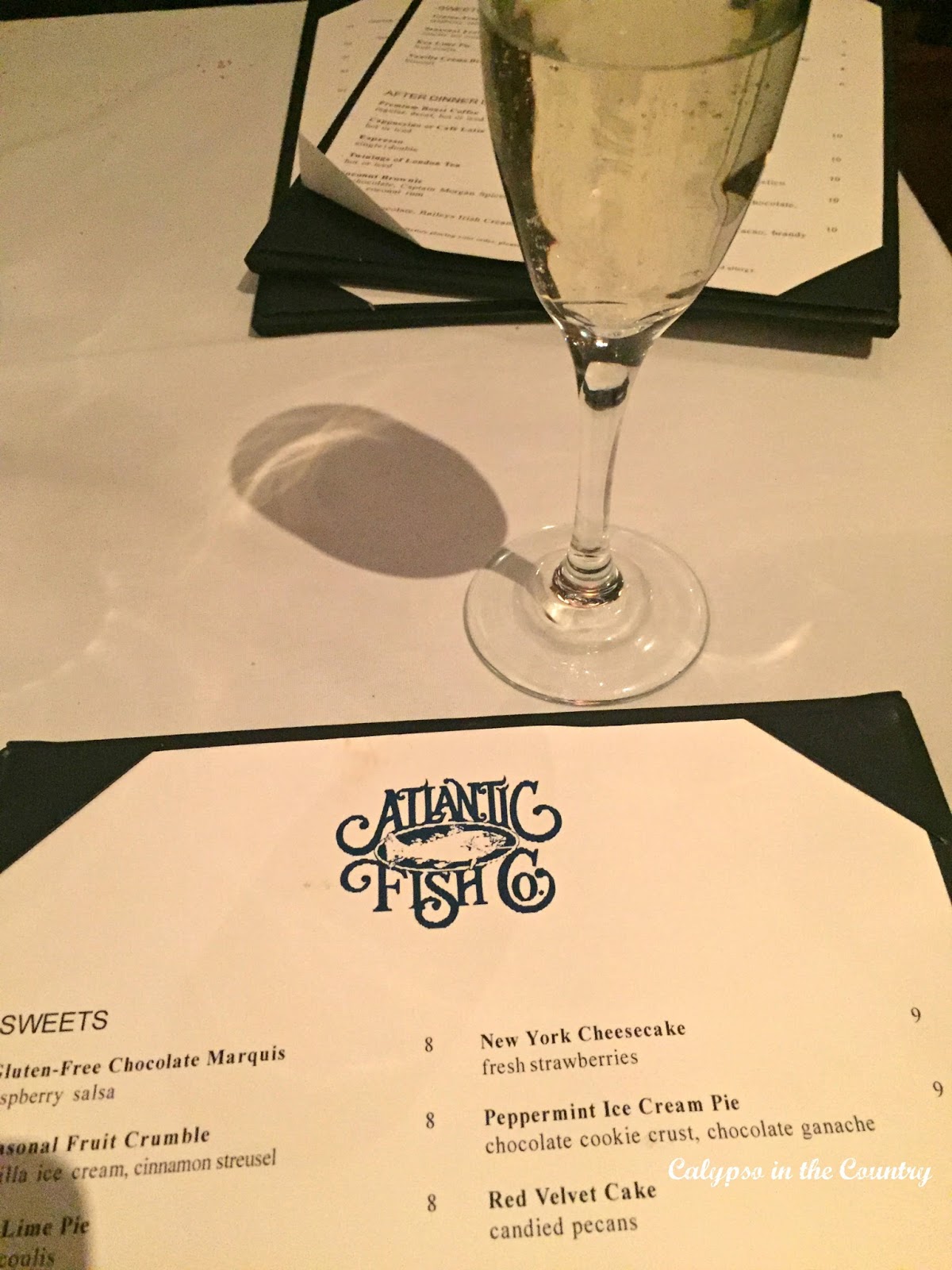 We looked at the dessert menu but once again, we were too full.  Though, later in the evening we made room for ice cream (tea for me) at JP Licks again.  I was starting to feel like a regular there!  We brought the ice cream and tea back to the hotel and lounged around on the catwalk about the hotel lobby.  A nice way to spend our last night in one of my favorite cities! 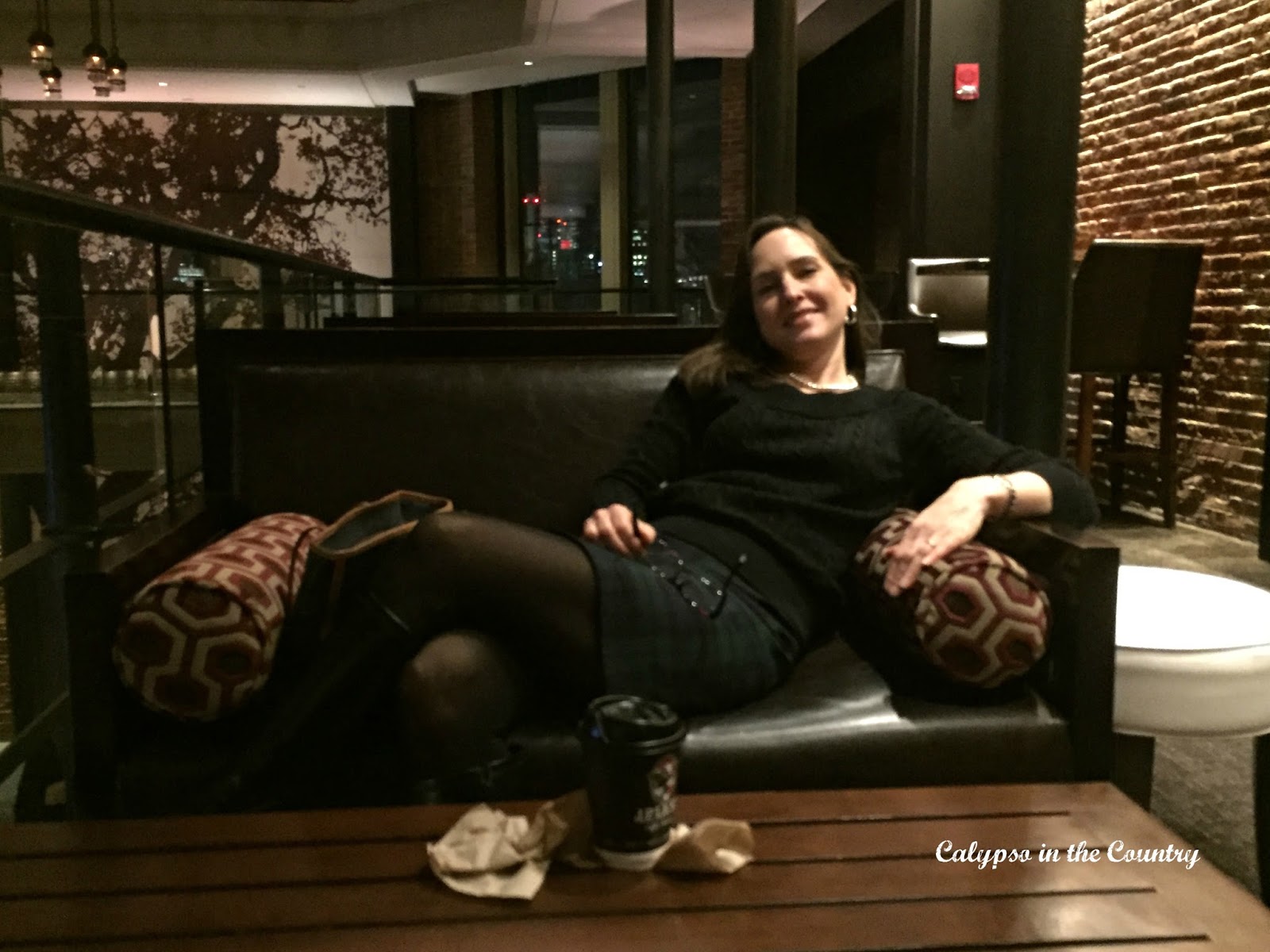 The next morning we had a few more activities planned along with the long drive home.  You can read all about Day Three – HERE.

Thanks for following along on my trip with me!

Yes, I think I found my new favorite place to watch the Kentucky Derby!  In the past, we have attended Kentucky Derby parties in our neighborhood or watched the race from local restaurants.  Usually, we just watch at home with the kids.  Basically, the four of us pick a few horses and cheer them on…

How is it August already?!!  This summer is going way too fast and I am not happy about it!  Luckily, my kids don’t go back to school until after Labor Day, but still. Well, since tomorrow is the first Friday of the month, it’s time for the Take Me Away Link Party! Last month you…

Thank you to everyone who participated in my Spring Break Link Party!  I was blown away by all of your amazing trips!  Now, I think I need to really step it up on my own vacation planning… Let’s check out all these wonderful trip reports!  I’m sure you will truly be inspired!  Please remember to…

Last weekend, my kids spent an afternoon at my mom and stepfather’s house.  Each time the boys visit, my mom usually has some kind of craft planned. With St. Patrick’s Day around the corner, this time was no different… On this visit, my mom (“Mimi” to them) taught them about Ireland and came up with…

Welcome friends!  It’s time to link up those travel posts again.  With all the horrific events in the news, I think we could all use an escape… Let’s get started with the October party! Please link up to 3 travel posts you have written (new or old – as long as you haven’t shared them…