On Saturday, we returned from a week long vacation on the island of Grand Cayman. 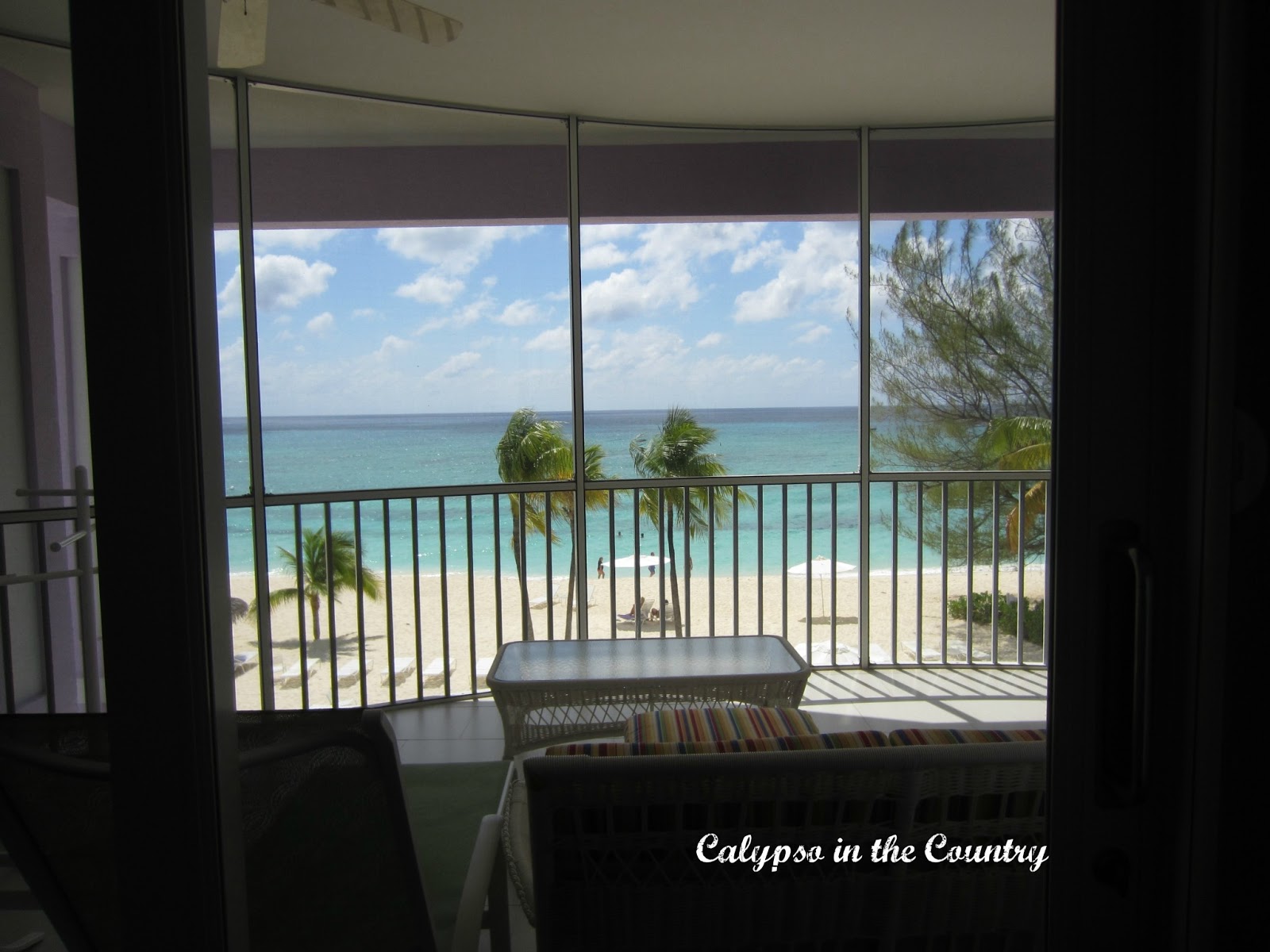 Having this view for a week made it very difficult to return home!

This was the fourth time, we stayed at The Avalon Condominiums. 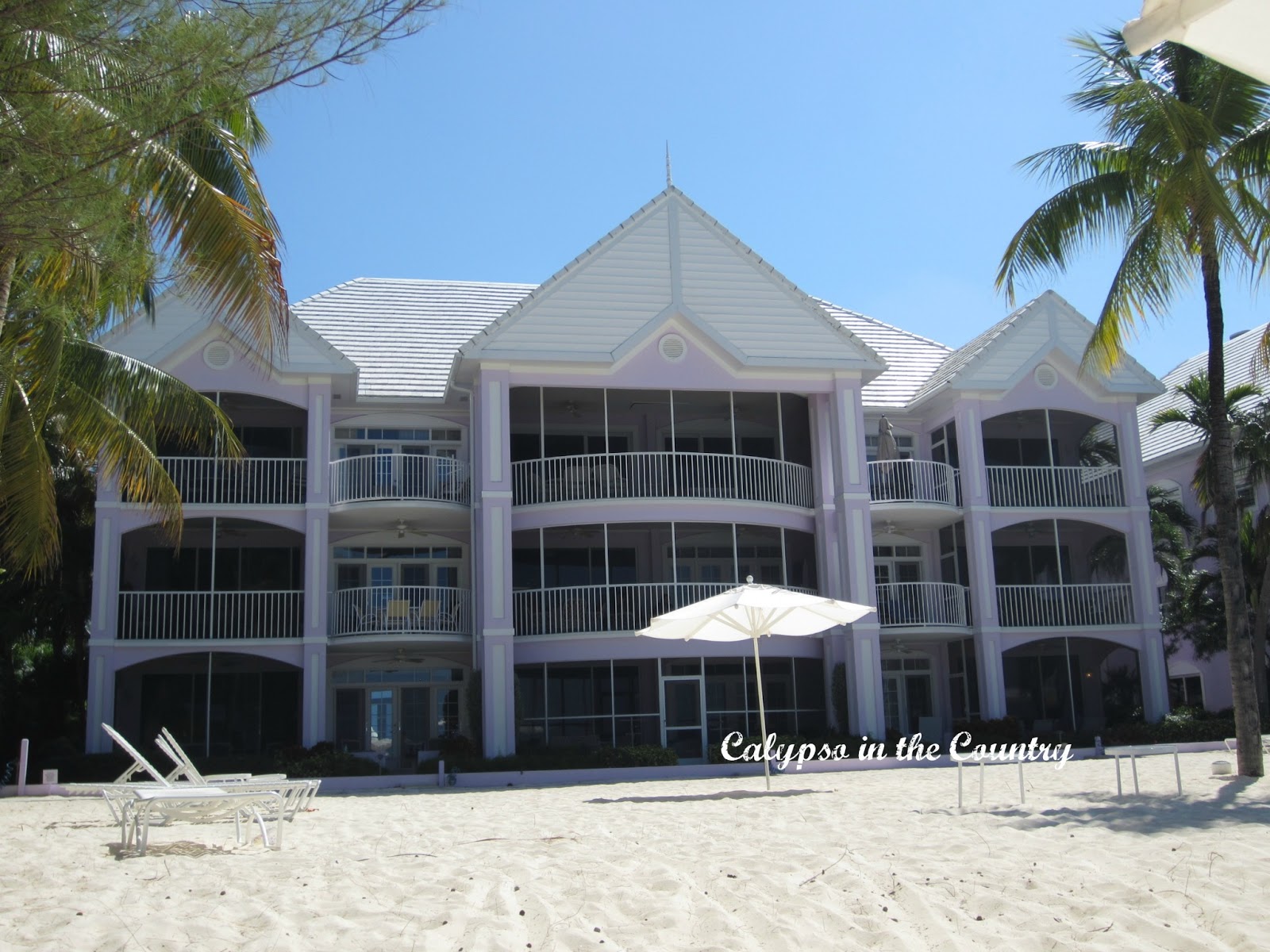 Each condo has three bedrooms, a full kitchen, living area and balcony/screened in porch.  We have stayed on all three levels at different times.  On this trip, we stayed in a top center unit.  The views were wonderful and the entire balcony was screened in which made it extra nice.  We still can’t decide it we prefer the view or being on the bottom level and being able to walk directly out the balcony onto the sand.  Either way, I won’t complain!

The rooms were immaculate as always.  In fact, I think they just remodeled the unit we stayed in. 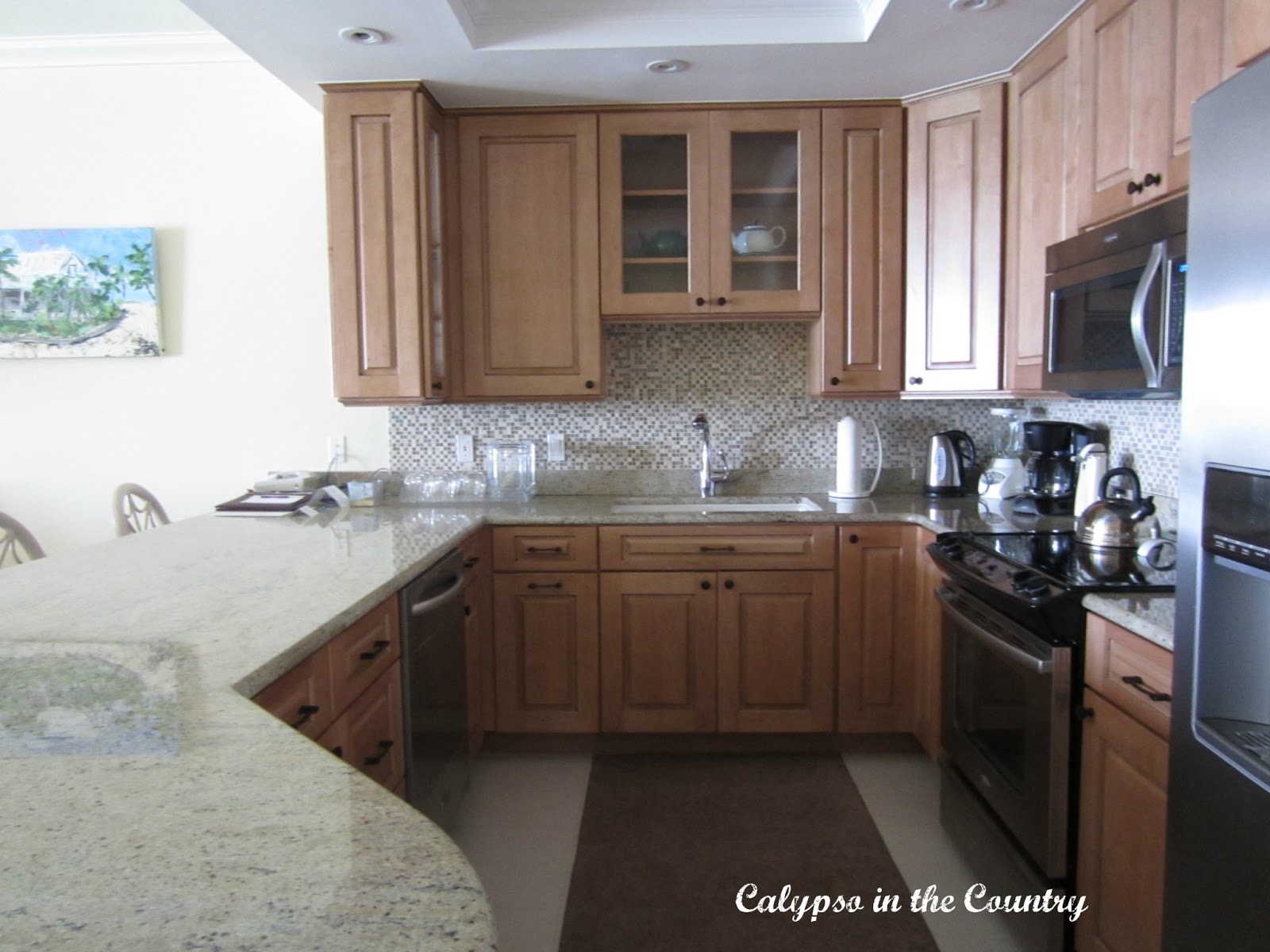 Every inch of the kitchen was in perfect condition! 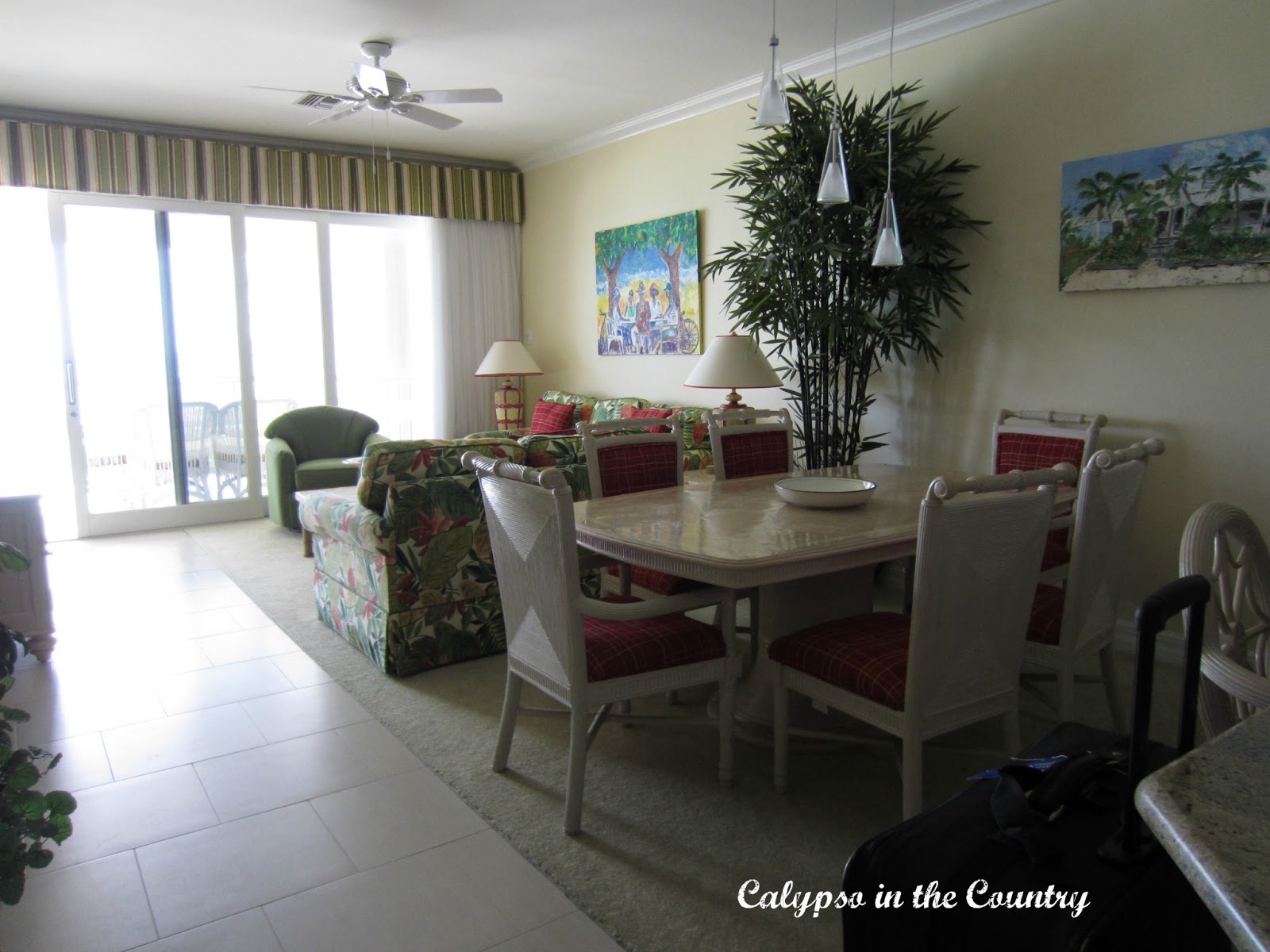 The colors in the condo were bright and cheerful. 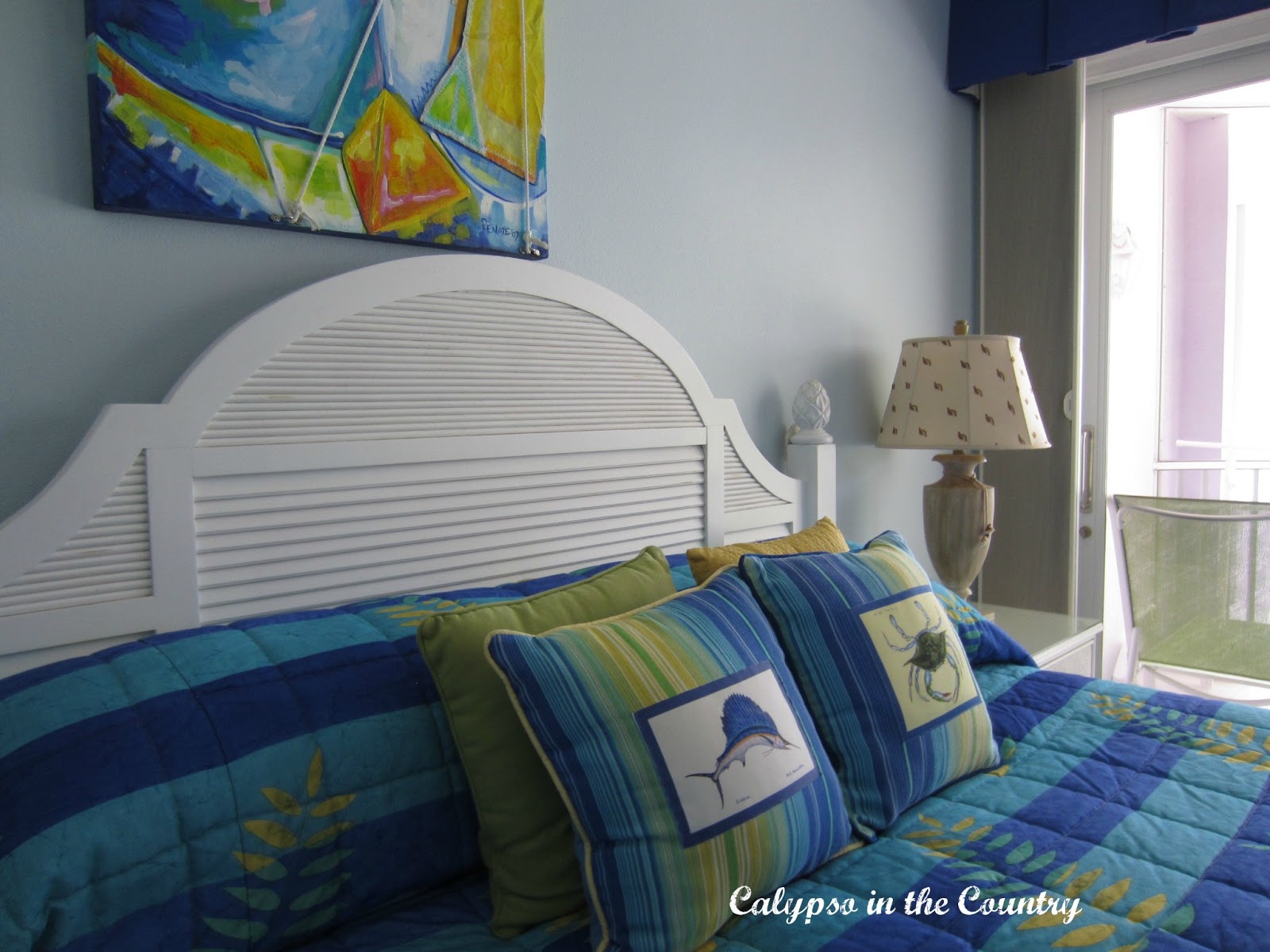 And this was one of the most comfortable beds we had ever slept in!

Although it was nice being inside… 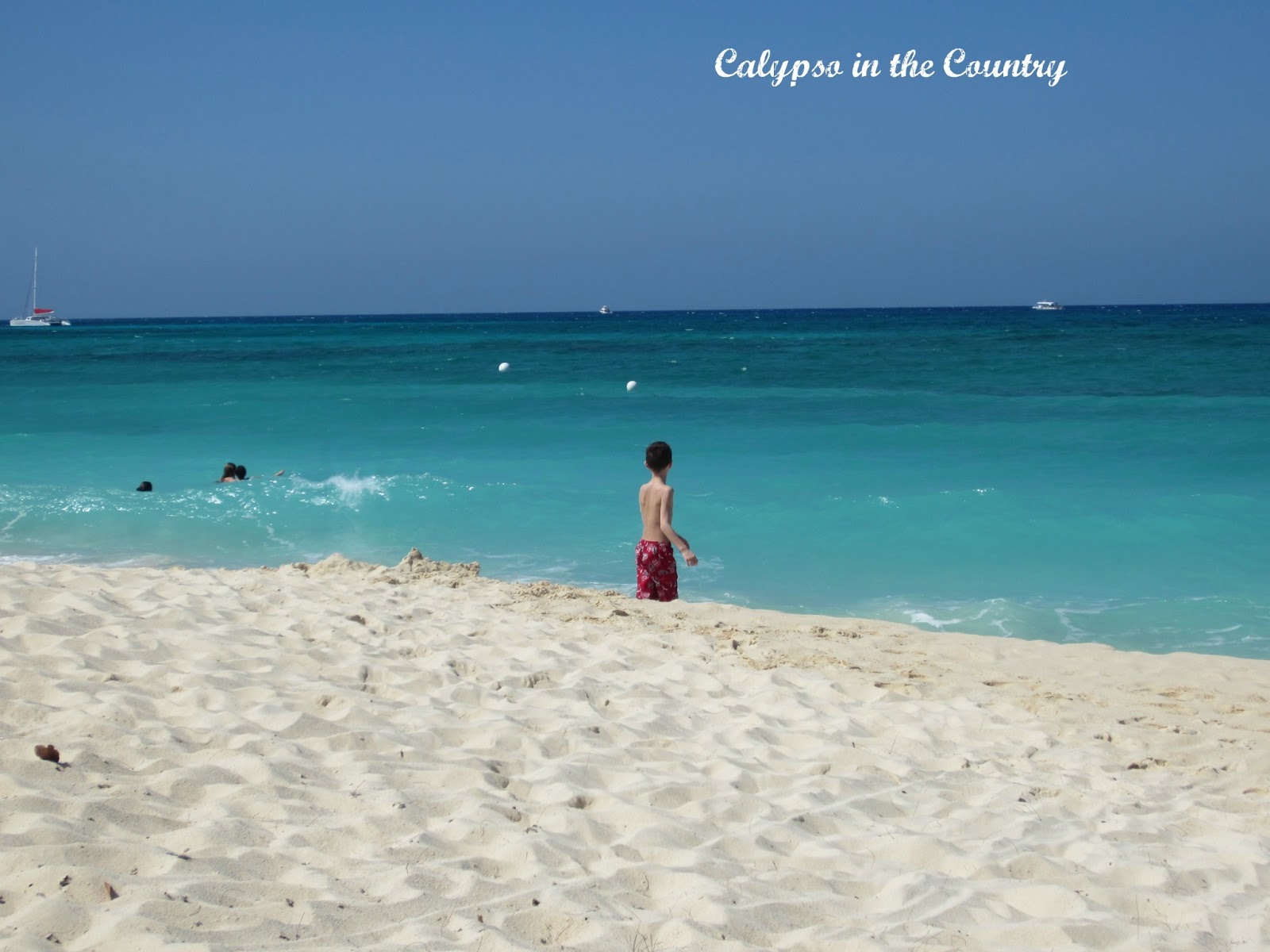 There is nothing like that color of water right outside our door! 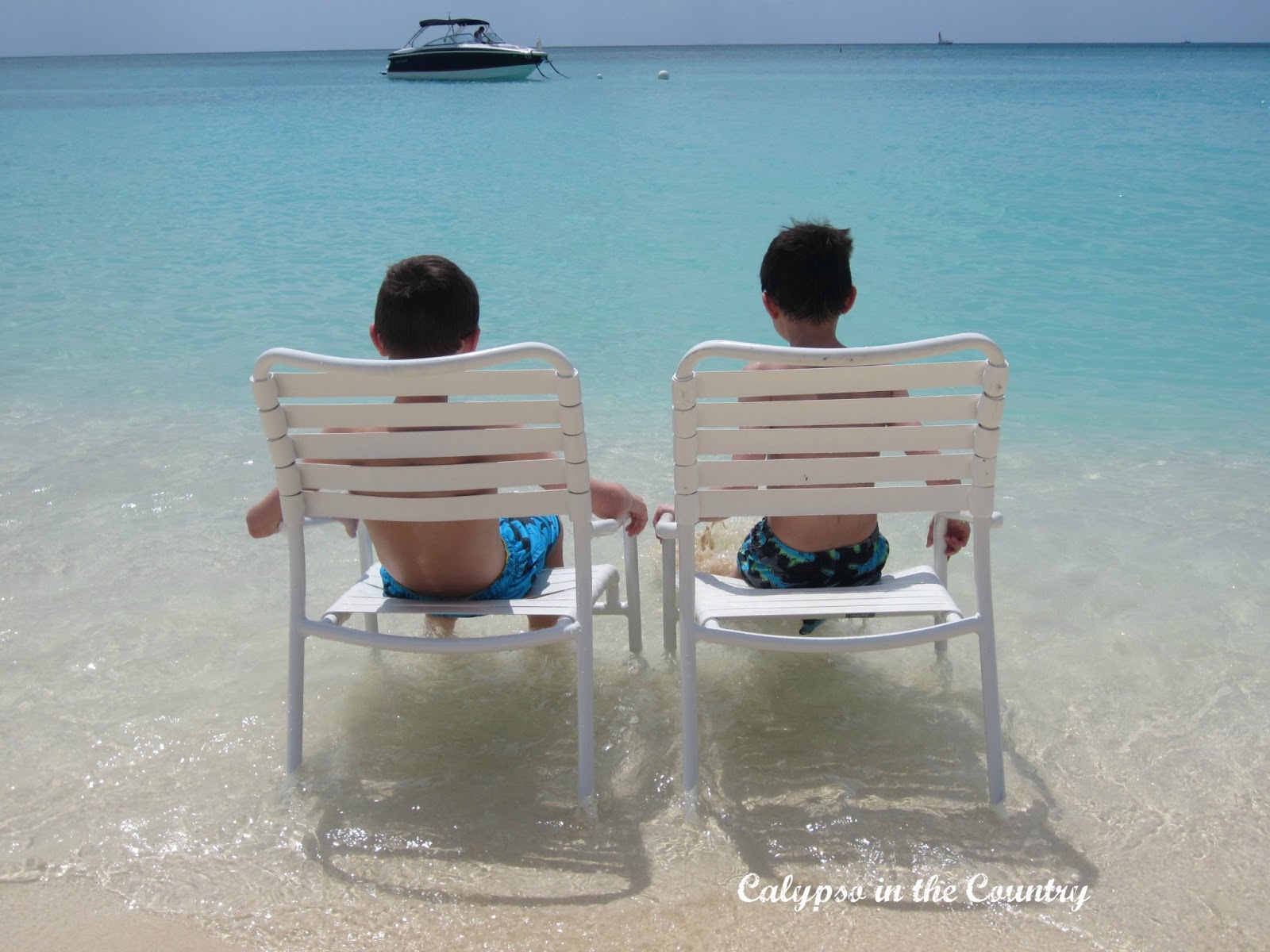 Seriously, how can you not relax here! 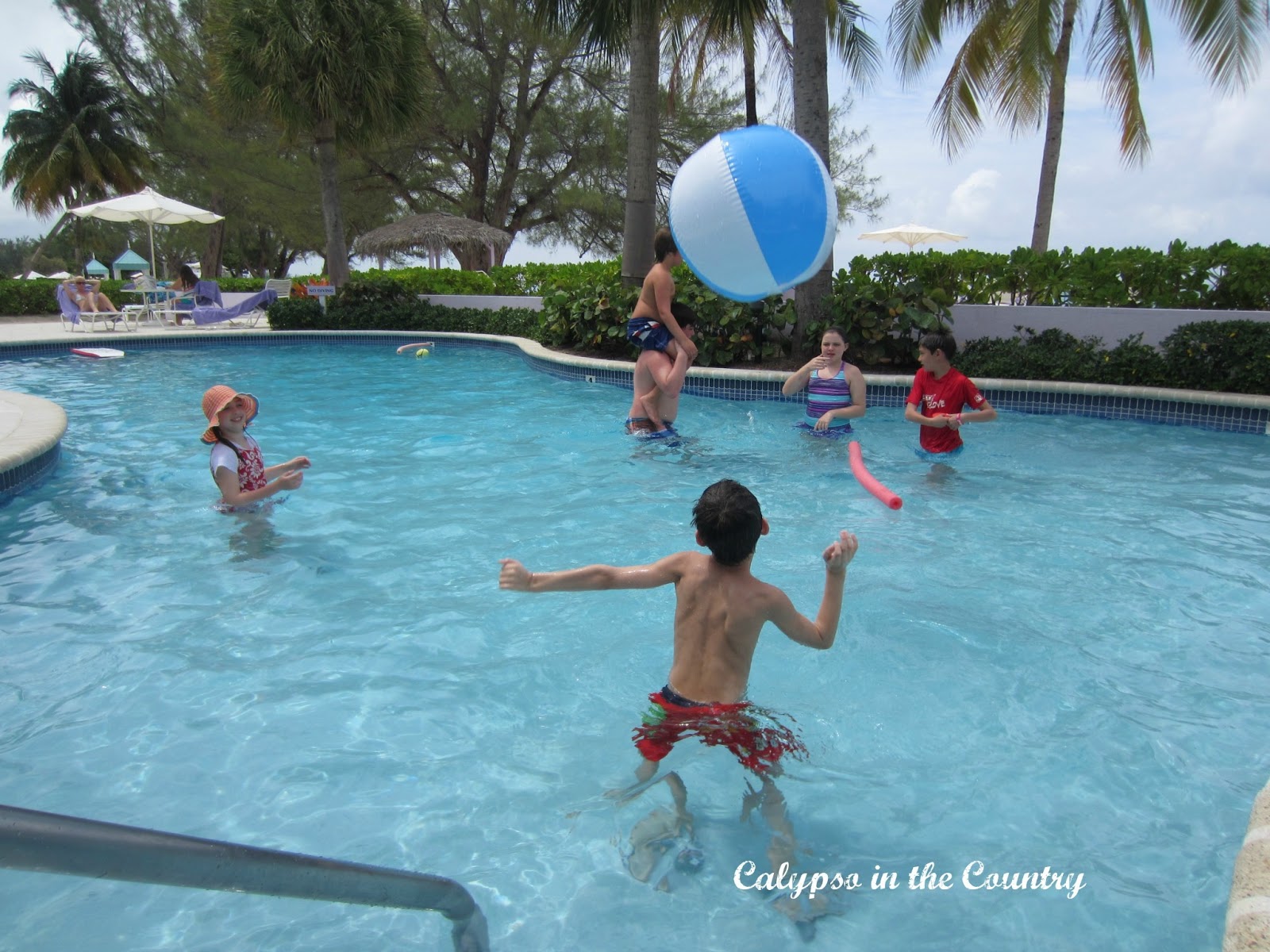 The kids always love the pool too!

Even though we have been to Grand Cayman many times before, we still love exploring the island and breaking up all the beach time with some fun activities.

Rum Point is on the other side of the island and it takes about an hour to drive over.  On the morning we decided to go, I was worried that the weather wouldn’t be nice over there because it was cloudy and windy on our beach.  My husband was like, “Oh, it will be fine”.

Unfortunately, it was cloudy and windy over there too!  When will he learn to listen to me? 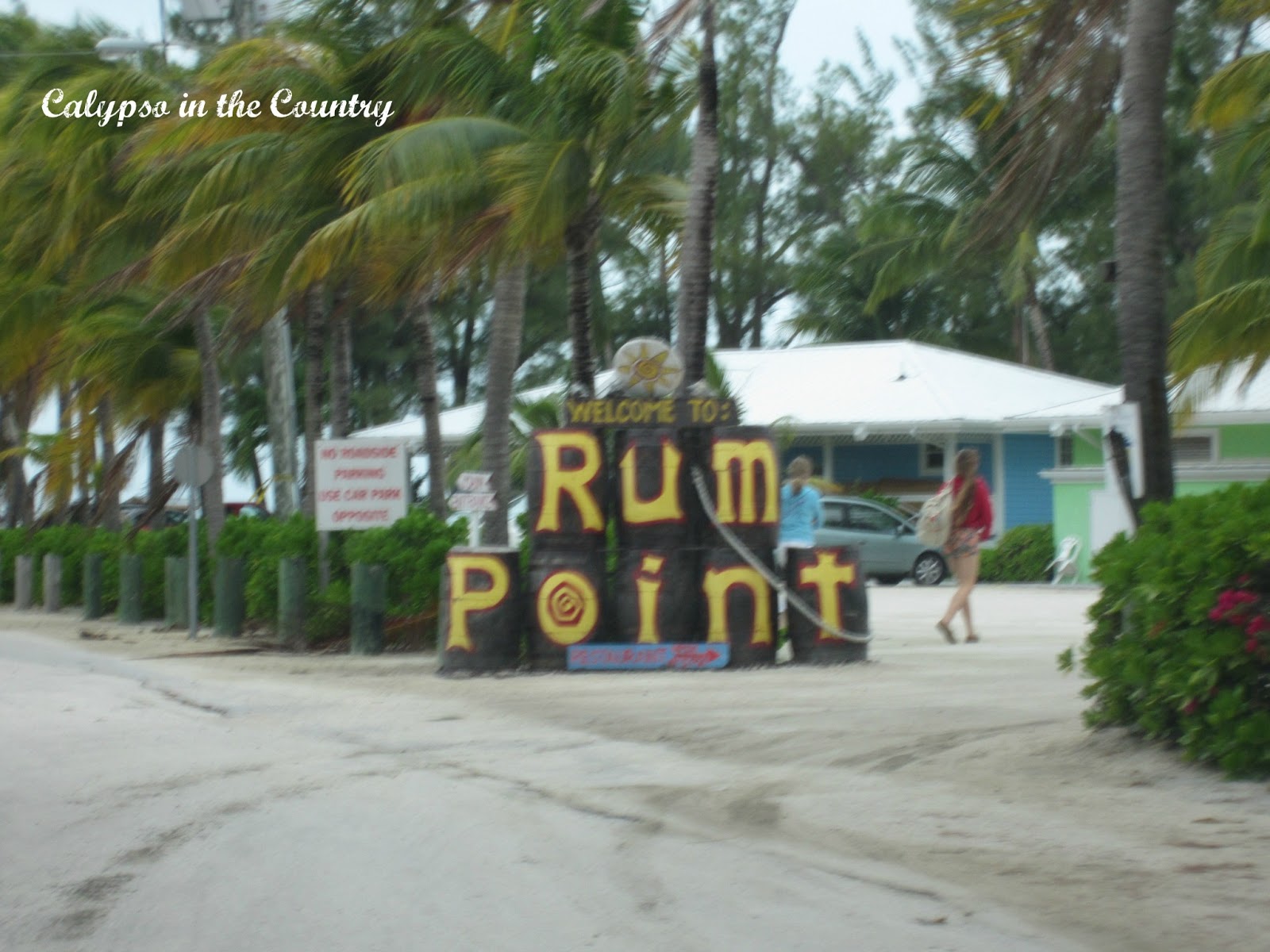 As you can see, I attempted to recreate the now classic picture from our first walk on the Rum Point Pier in 2009.  In 2010, the boys were very cooperative and happy to be together.  Fast forward three years to the present and they were not thrilled at all.  In fact, I had to force them to hold hands and walk together.  Of course on this trip, it was cloudy and very windy but that was not excuse.  My nine year old acted so annoyed and didn’t even stand up straight.  As you can see they look almost the same size.  My younger son is pretty tall, but not as tall as my older son.  So frustrating.  My husband told me to not try to force things, but my heart was broken that they weren’t as excited as I was to pose for the new picture.  Boys…

Because of the not so beautiful weather that day, the water was too choppy to rent kayaks.  We were pretty disappointed but we still had fun at lunch – even though it was too windy to eat outside!  Then we shopped a bit, played on the hammocks and headed back. 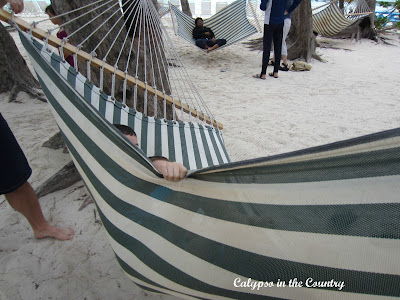 Luckily, the cloudy day made it perfect to visit our next destination:

Home of the famous blue iguana! 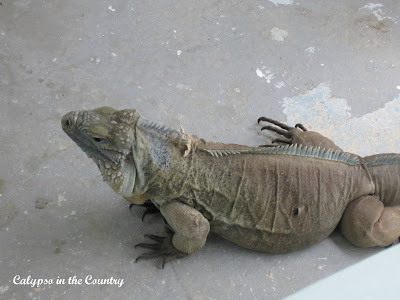 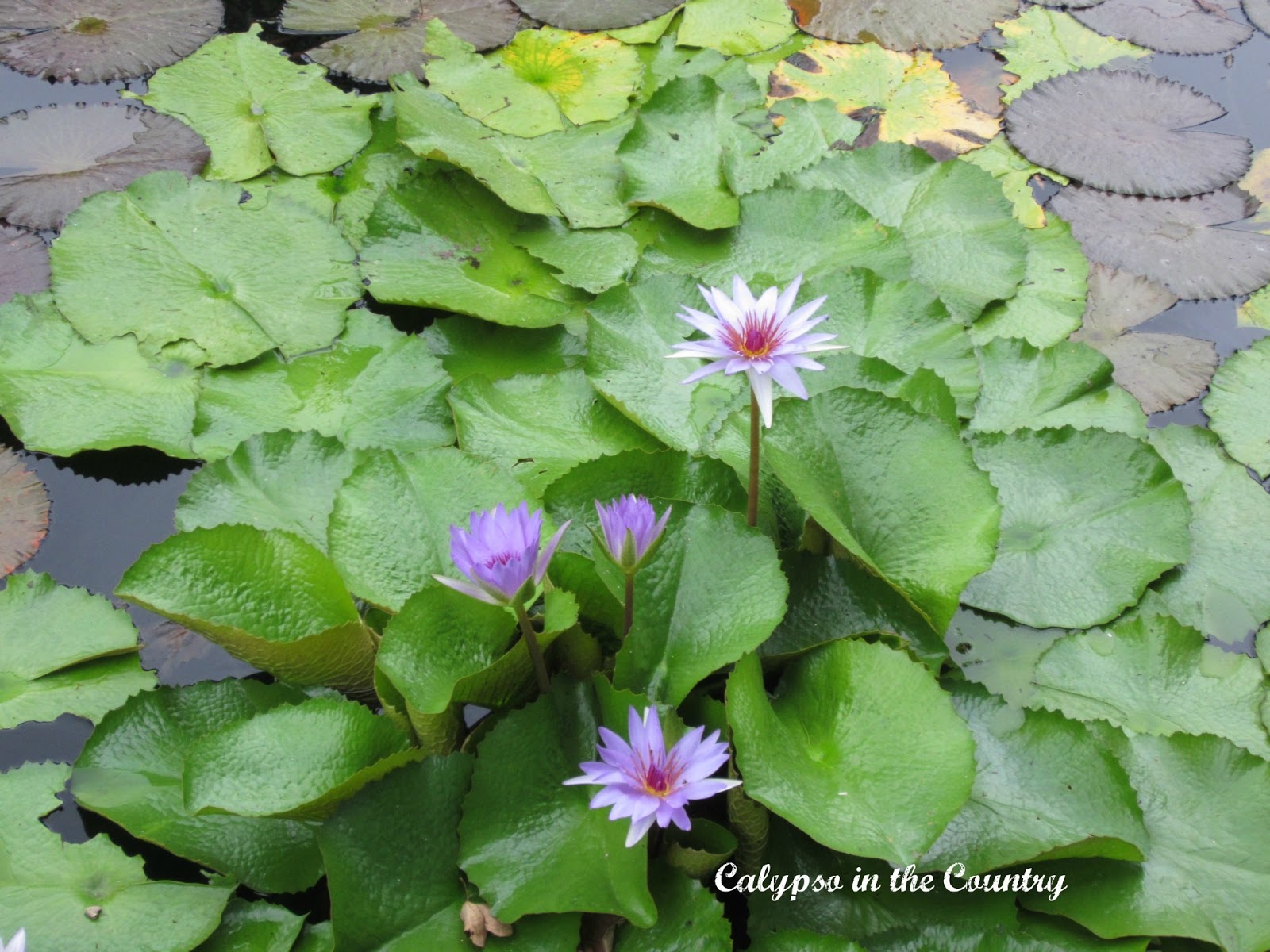 The park was beautiful even on a cloudy day. 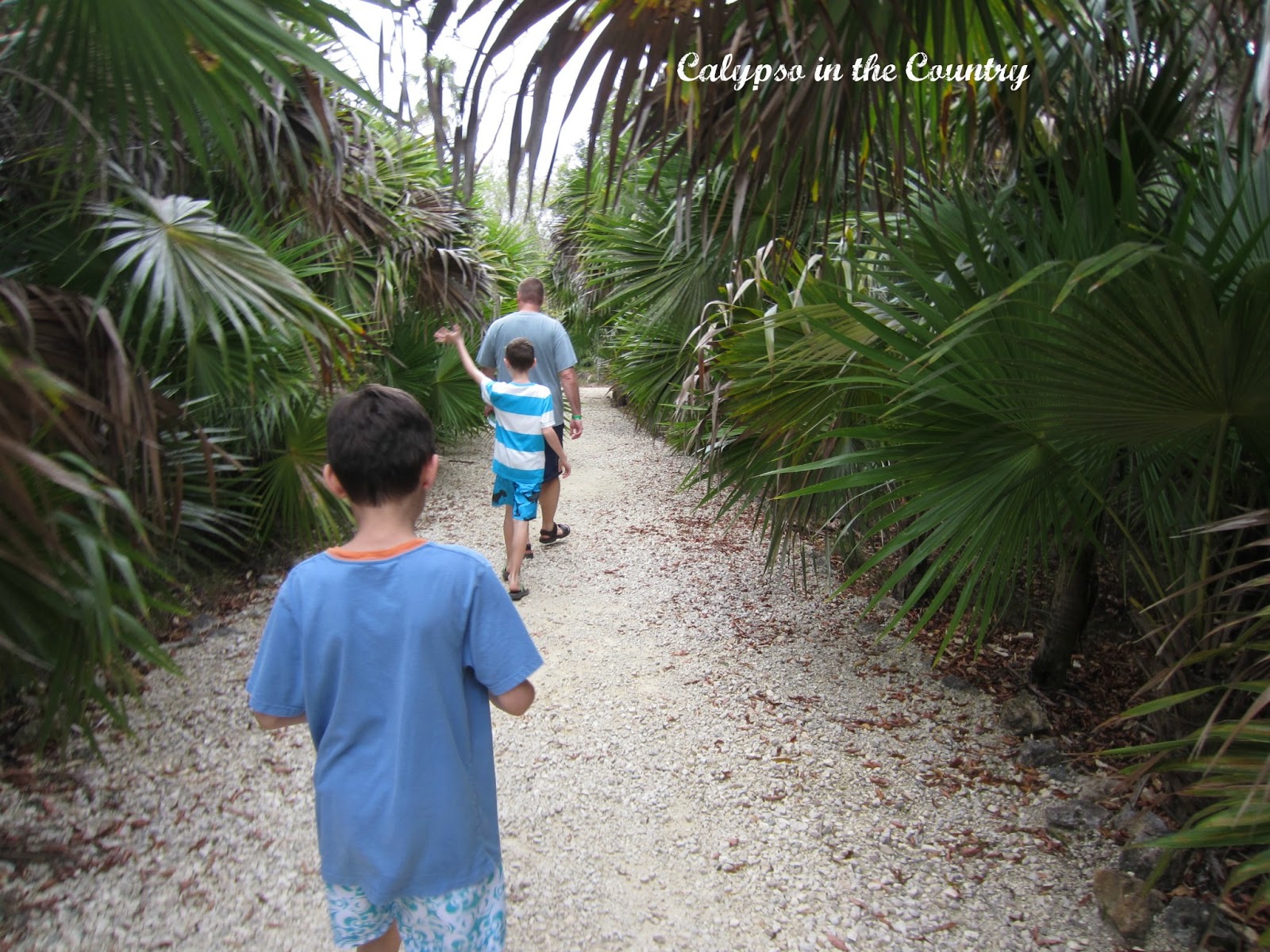 The boys had the best time exploring like they were in the jungle.

I think we had to stop and read the description on every sign on every tree and plant! 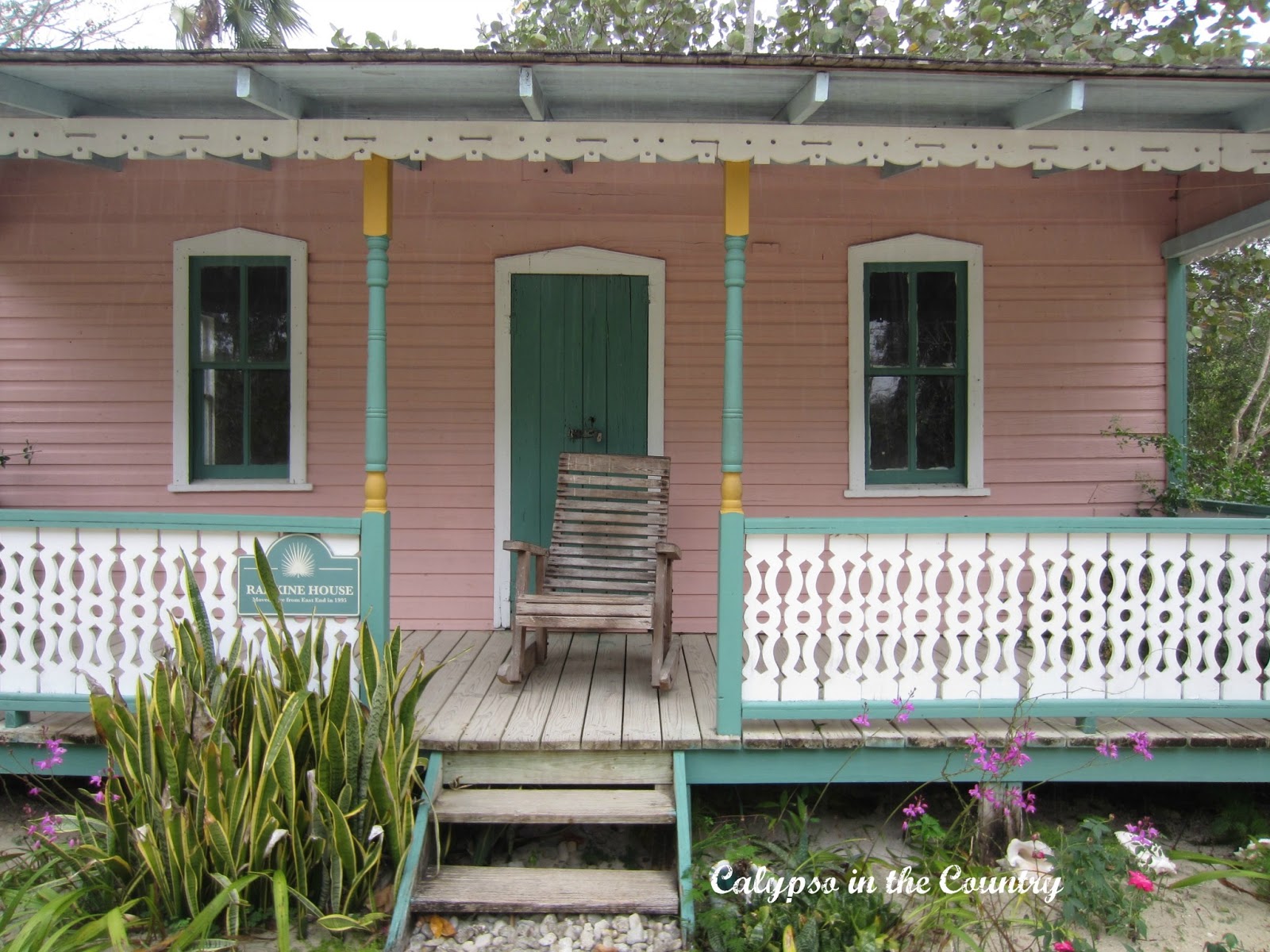 We loved this old Caymanian house on the property. 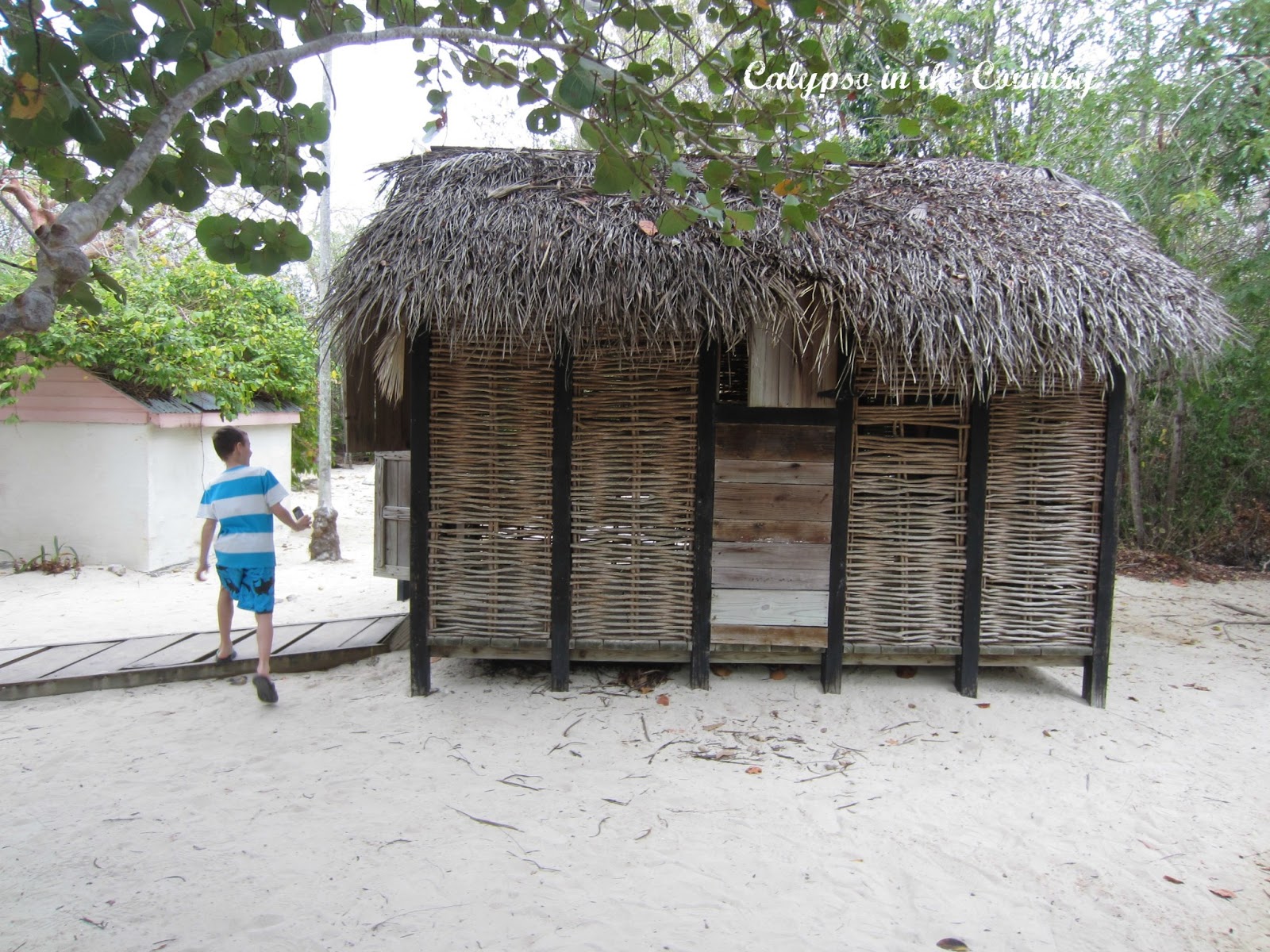 And the thatched roof one out back! 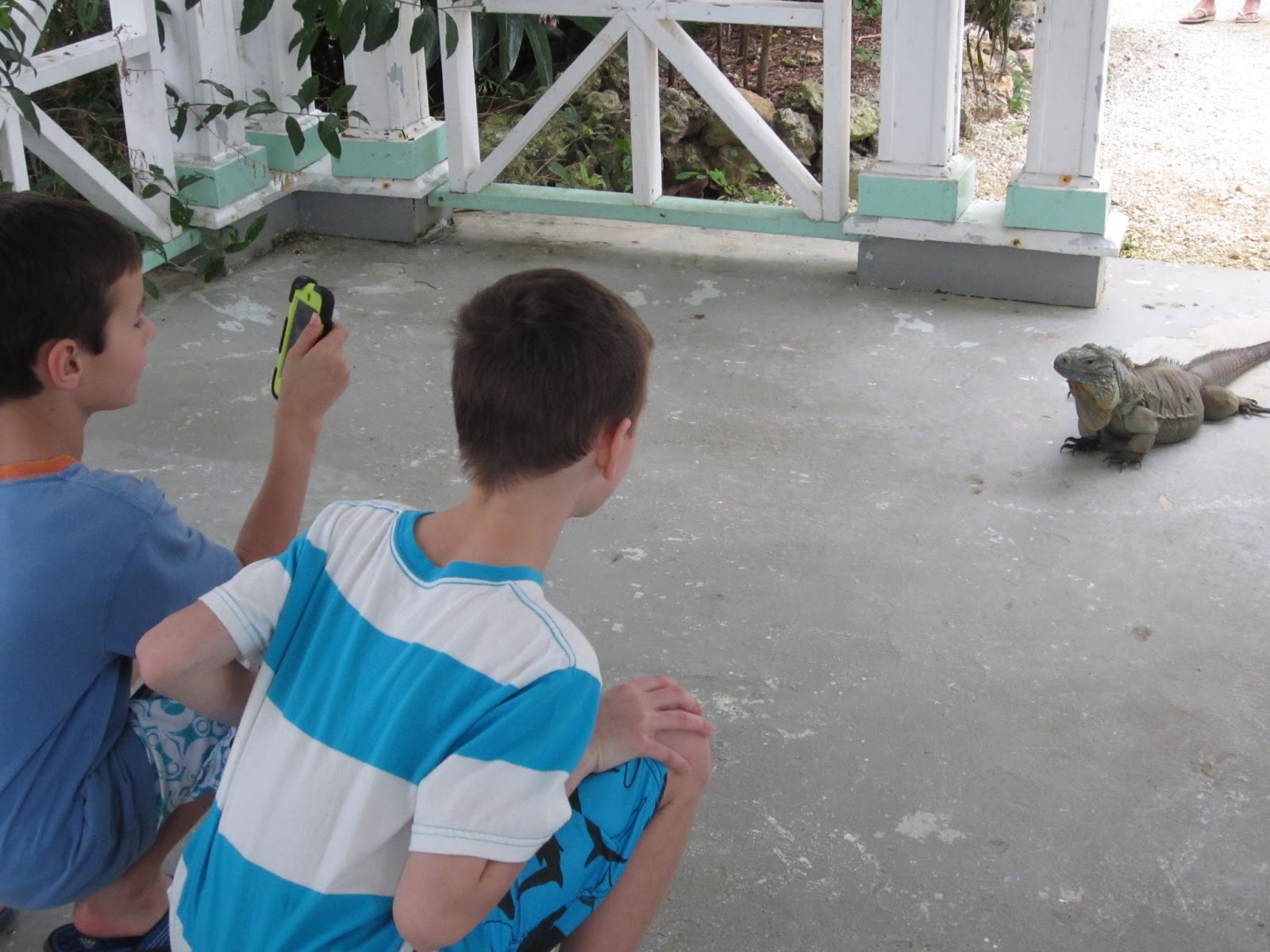 But the iguanas were definitely the big attraction!

Next we headed to the Pirates Cave! 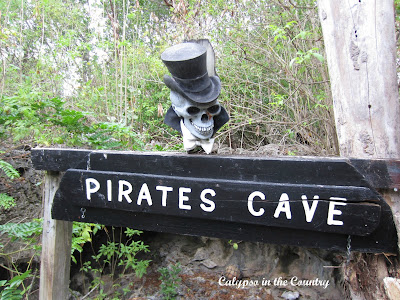 The Pirates Cave is a park with exotic birds, a petting zoo and cave.  It is located in Bodden Town on the south side of Grand Cayman.   We visited the cave last time we were in Grand Cayman and the kids wanted to go back again. 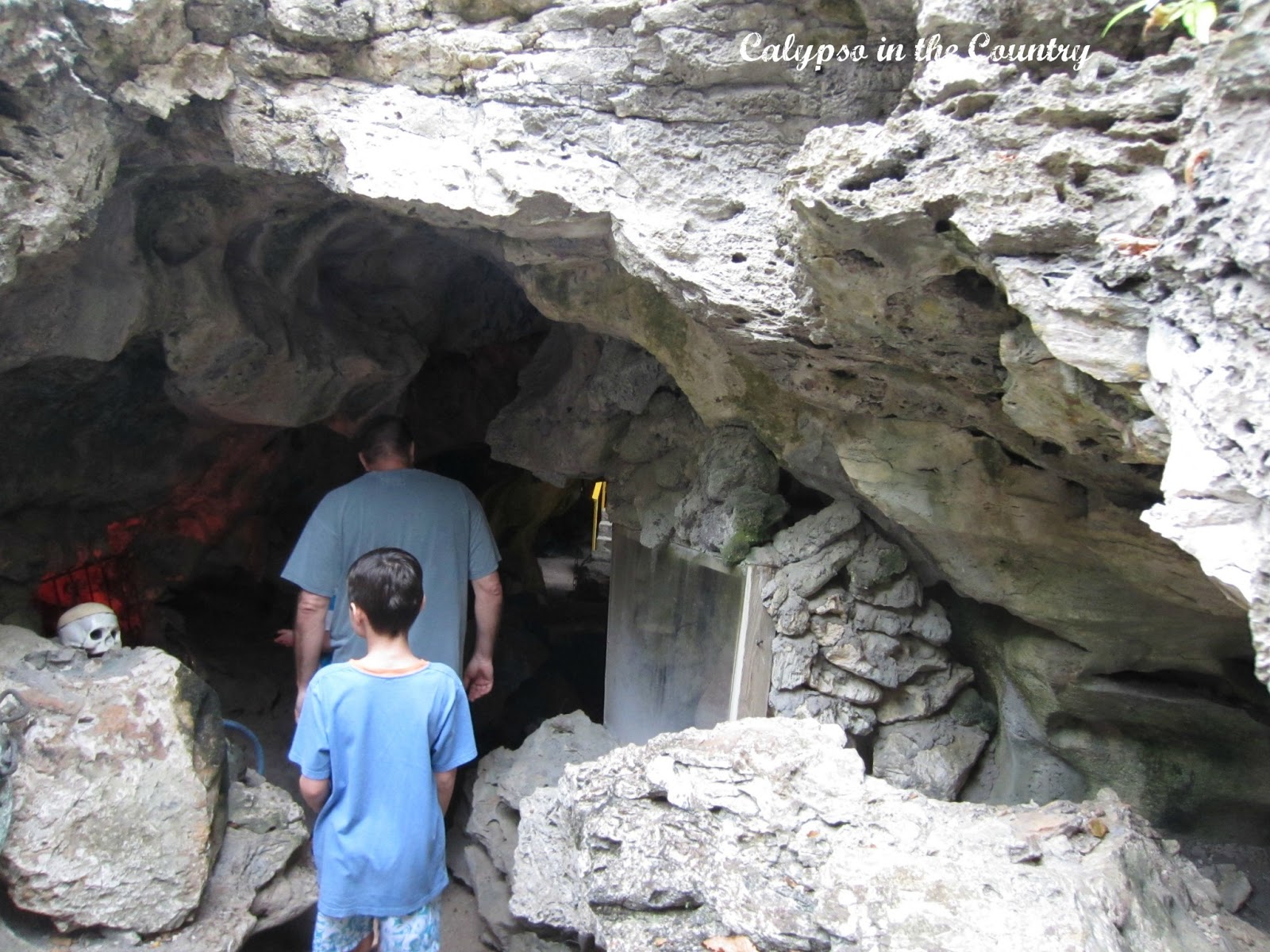 We walked in as far as we could, but those daring enough could crawl deeper like the pirates did.  Long ago, the cave opened up to the ocean on the other end but over the years the opening has filled in. 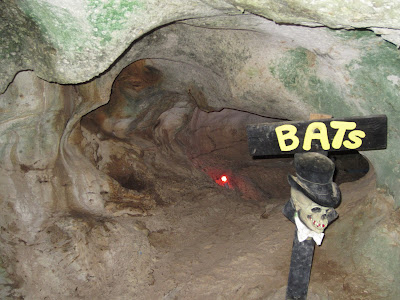 Luckily, this time I didn’t spot any bats… 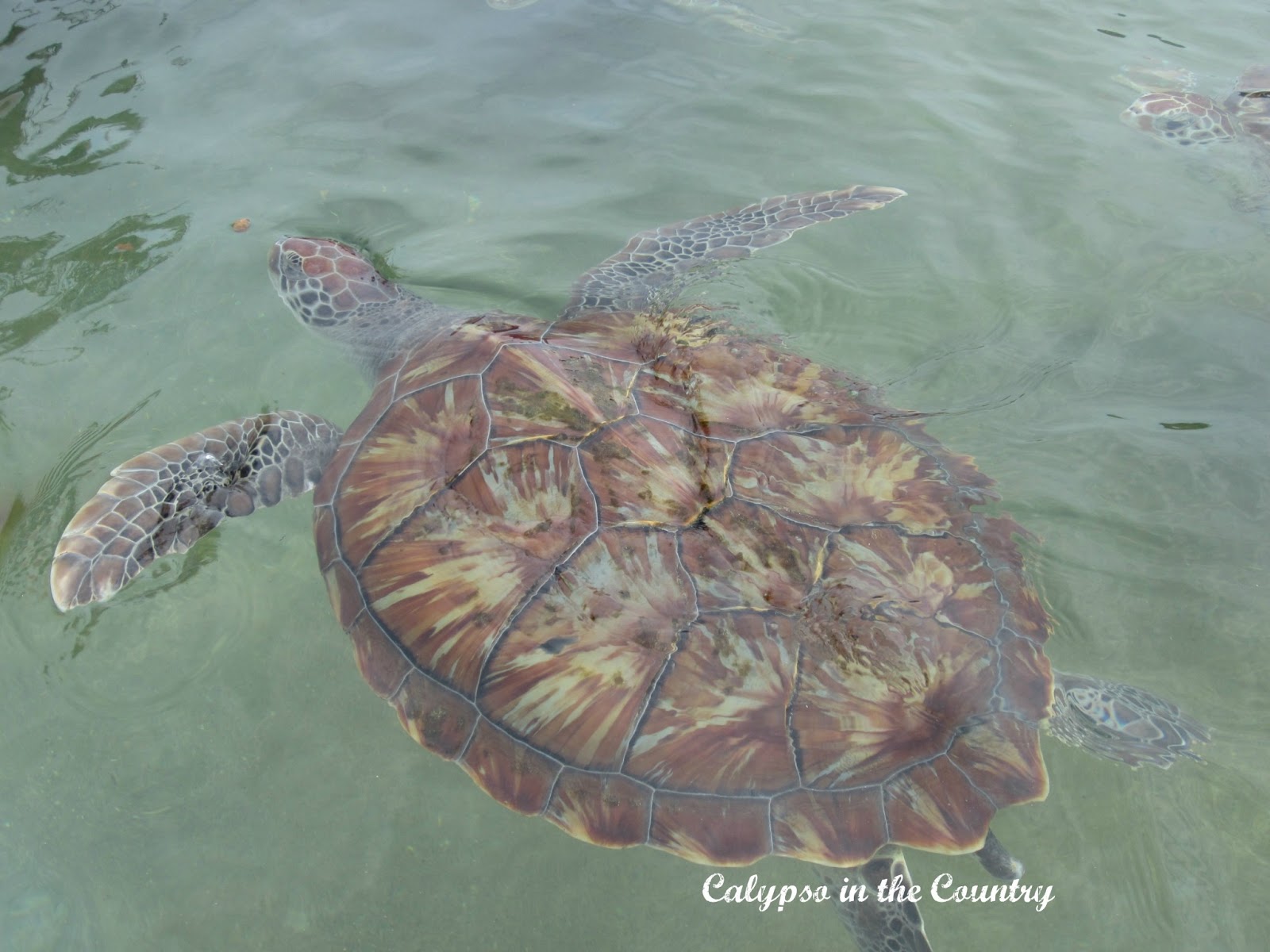 Like every year, the kids love visiting the turtles.  Unfortunately, this year we happened to arrive when a bunch of cruise ship tours were coming in so it was quite crowded. 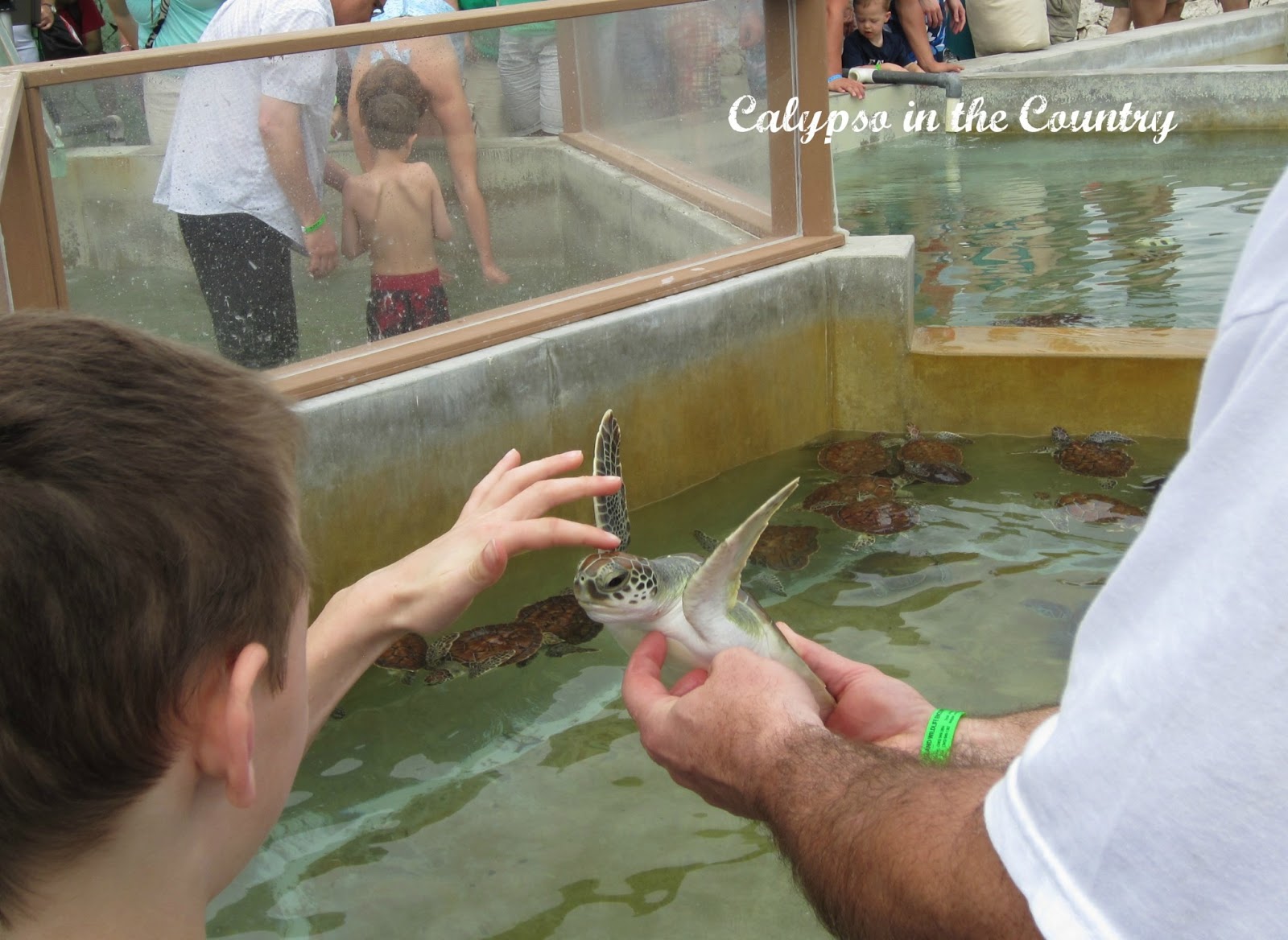 The kids loved it anyway!

Afterward we stopped in the nearby town of Hell. 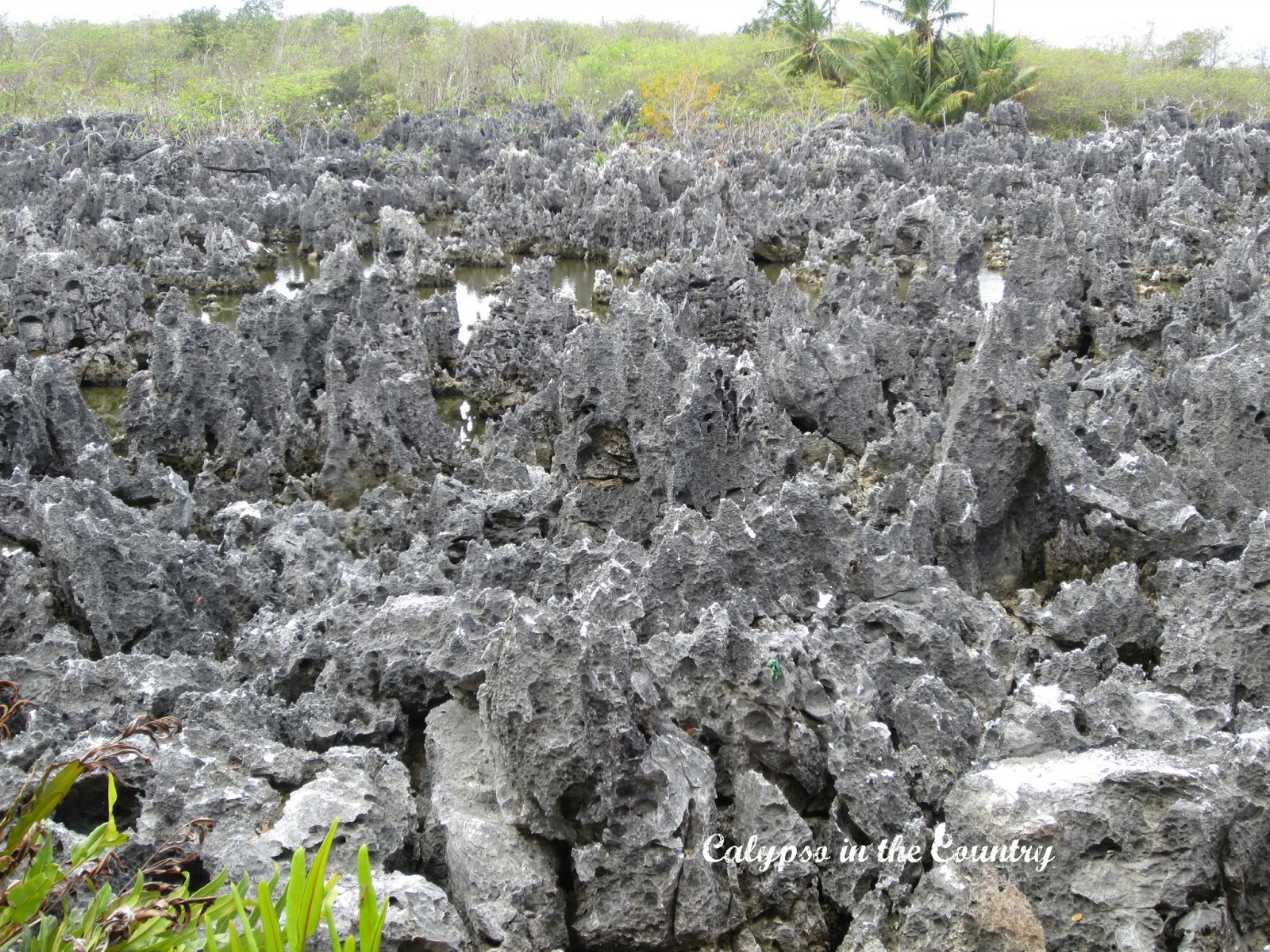 Hell, is basically an area with some ironshore rocks, a touristy gift shop and a post office so you can send a postcard with a postmark that says “Hell” on it!  Come to think of it, our postcard should be arriving soon! 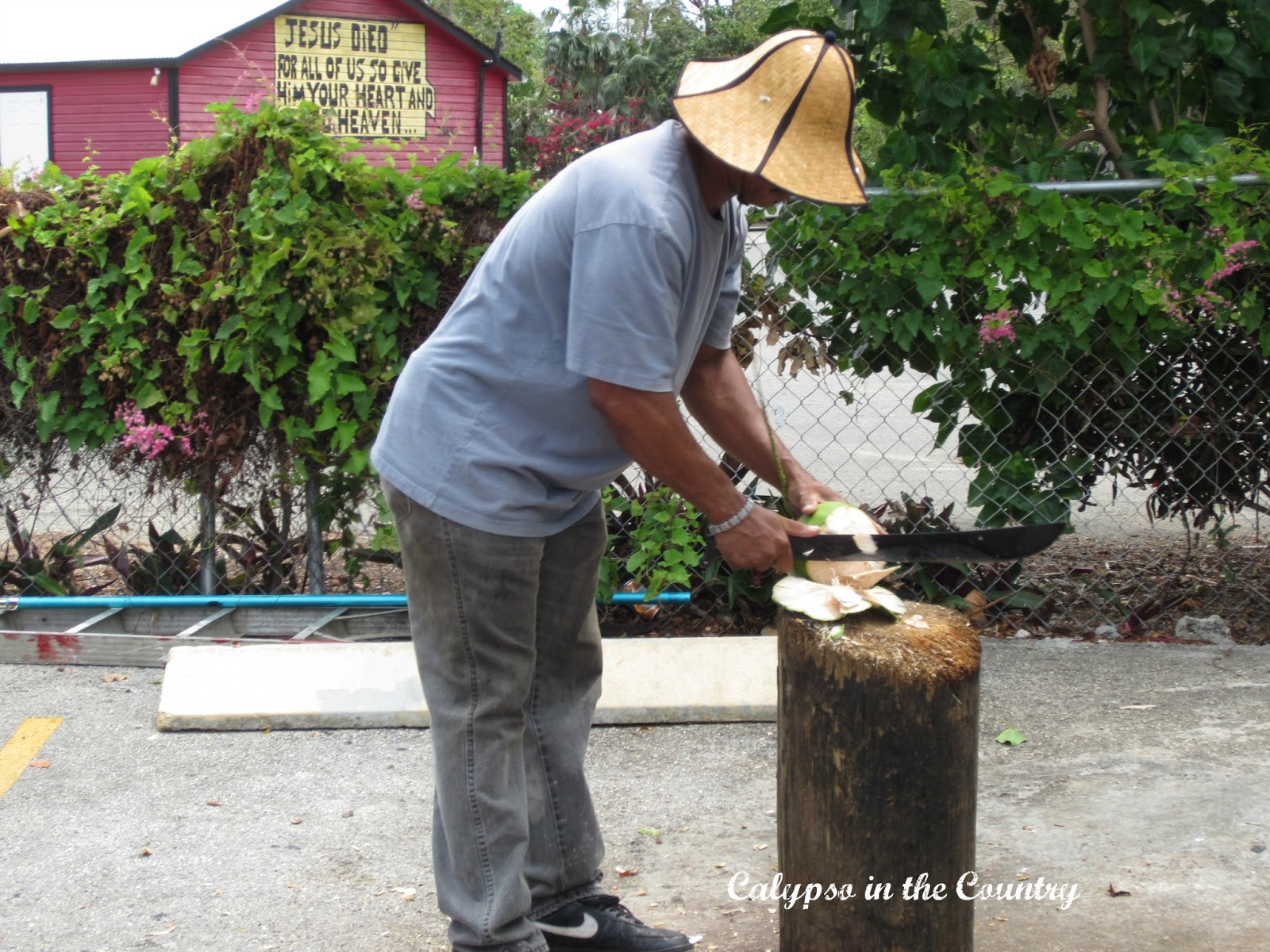 Oh, and there was a man cutting coconuts.  My son had been dying to try some fresh coconut water so he had his chance. 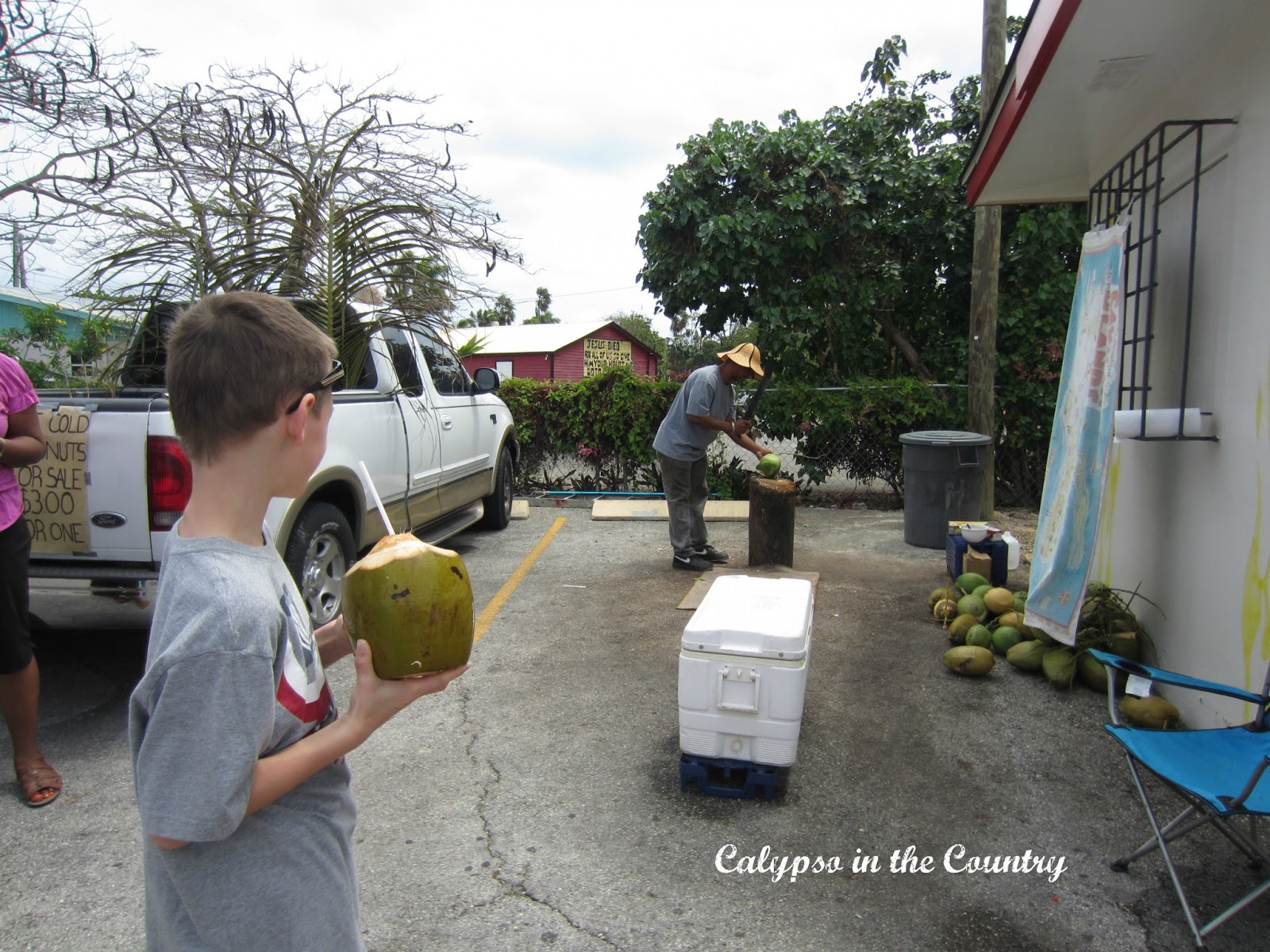 You can’t get any fresher than that!  Unfortunately, he really didn’t like it…but at least he gave it a try! 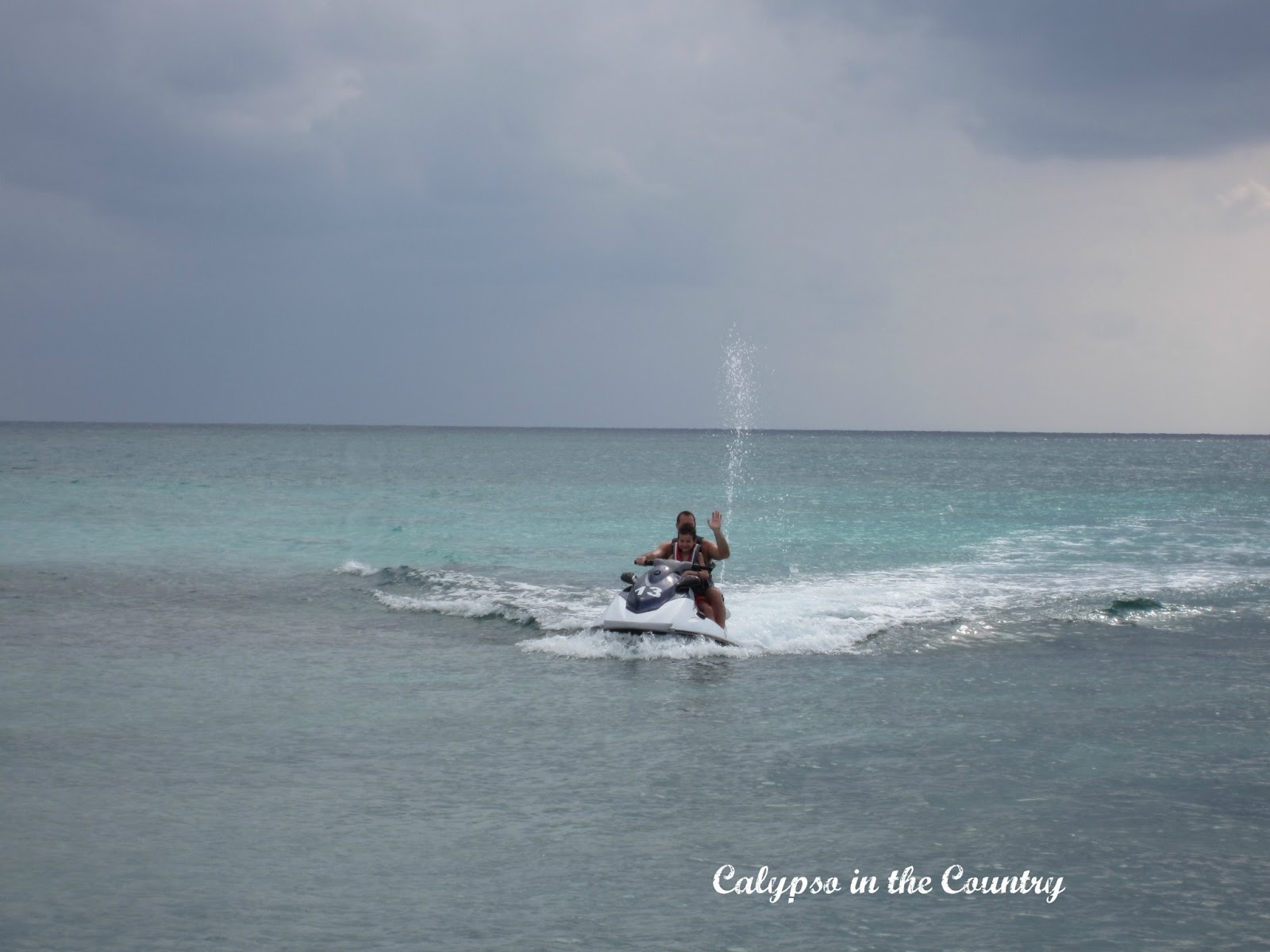 As expected, I held my breath while my husband took each son out on the wave runner!  Of course, they had the best time ever! 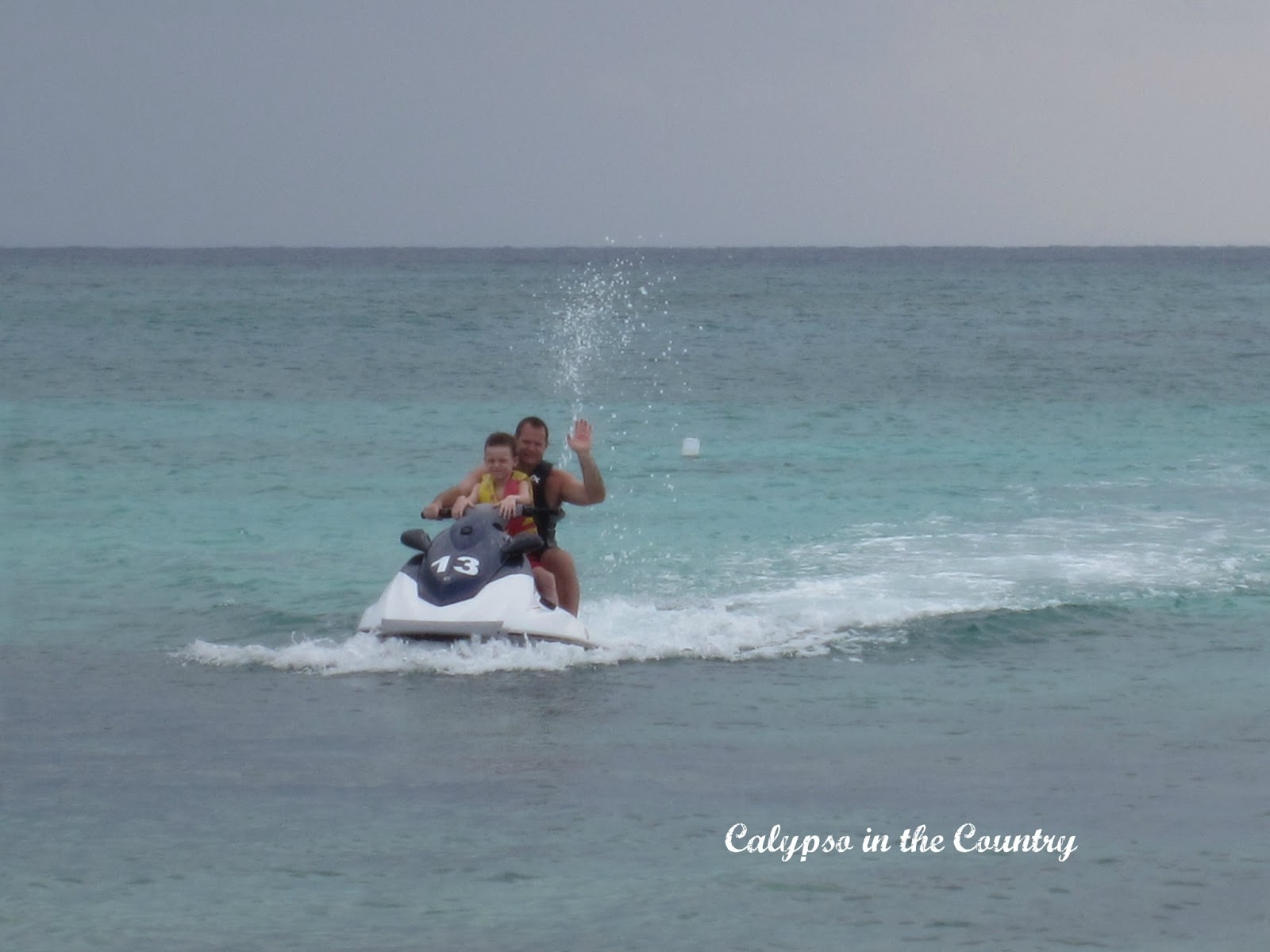 It’s a good thing they waited until later to tell me how they sped up to 50 mph!  Luckily, the wave runners made up for missing the kayaks at Rum Point! 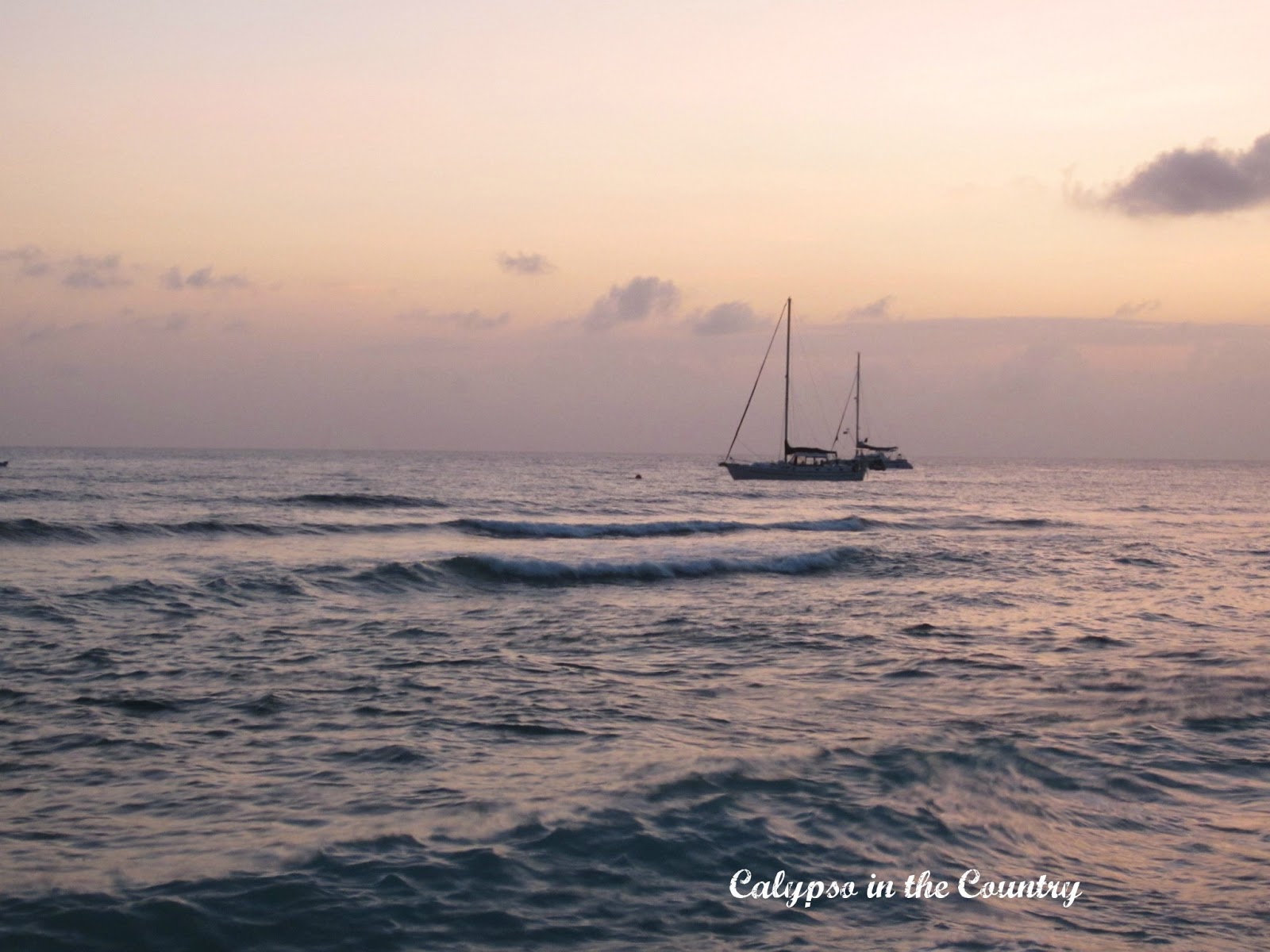 Well, that’s a recap of where we stayed and where we played!

If you need more of a Cayman fix, check out my old post, Grand Cayman With Kids.

And stop by tomorrow to explore some restaurants and shopping!

Have you been to the Cayman Islands?