My poor little girl started out the week 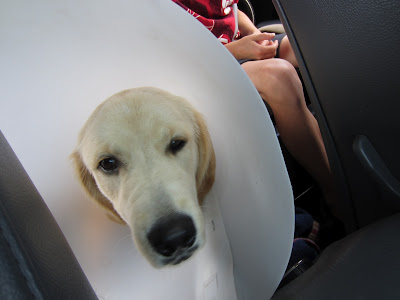 She looks miserable doesn’t she?

If you recall from last week,

Rosie has been on the mend from her spaying operation.

But we decided to take her to the beach anyway.

It’s not like she could have gone to the kennel

and I didn’t even try to find someone to come dog-sit her for the week!

we drove “down the shore” as they say in New Jersey.

But when we arrived at my in-laws,

their dog, Clover was not happy with Rosie’s cone.

In fact, she was terrified of it and started barking and running

and acting all crazy.

We decided to take off the cone during the day

and just watch her to make sure she didn’t lick or bite her stitches.

Rosie seemed relieved to have the cone off

and Clover calmed down. 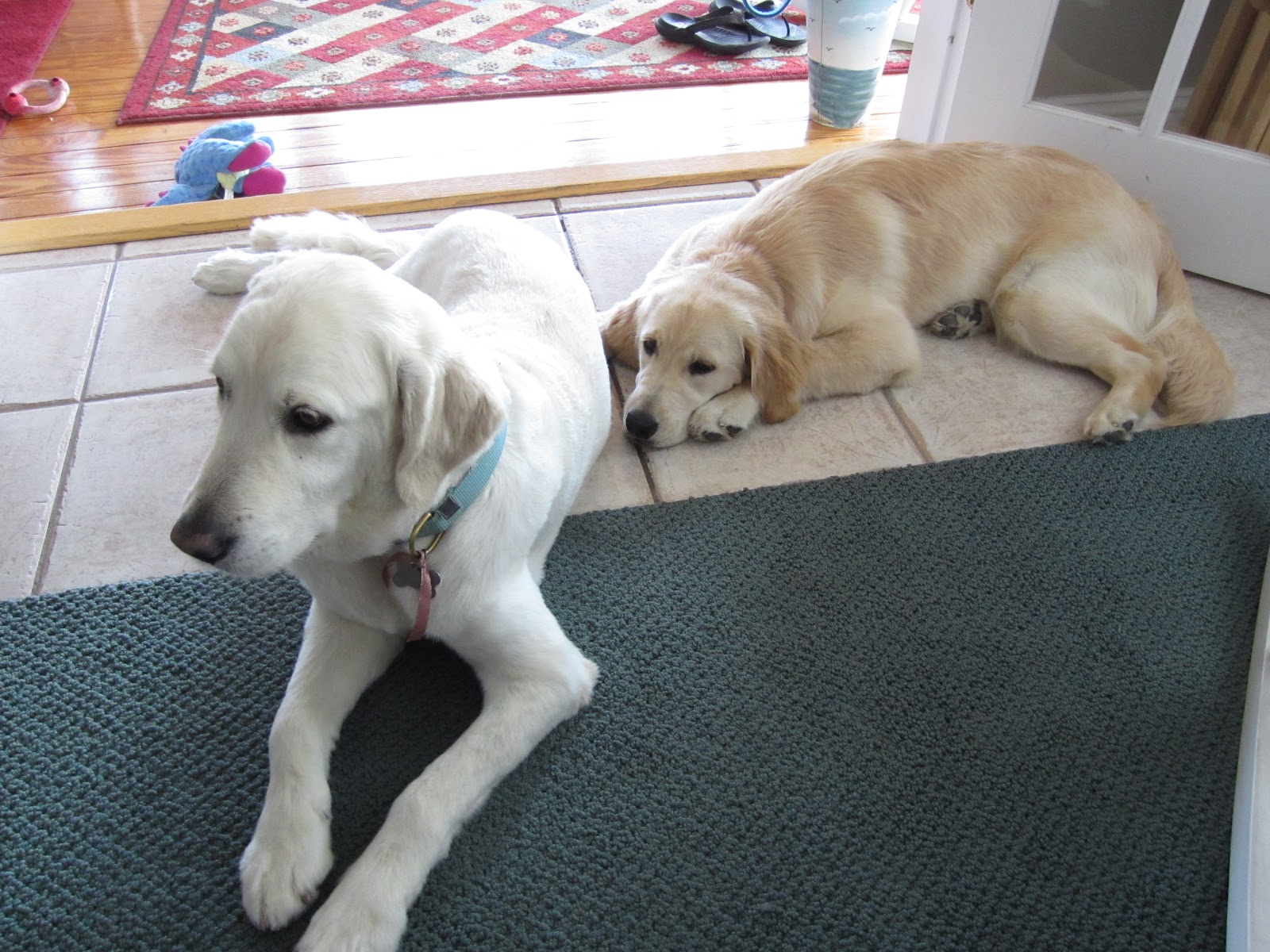 They were happy to just lay around together after that.

Clover is an English Golden Retriever

because she was just shaved for the summer. 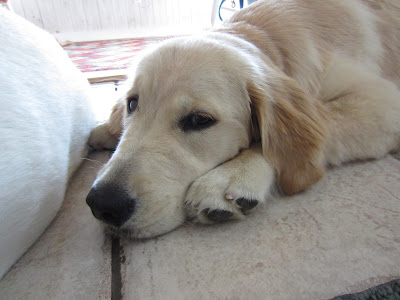 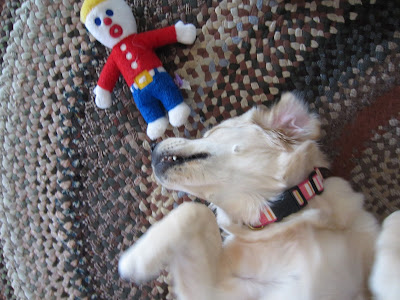 Rosie made herself at home right away. 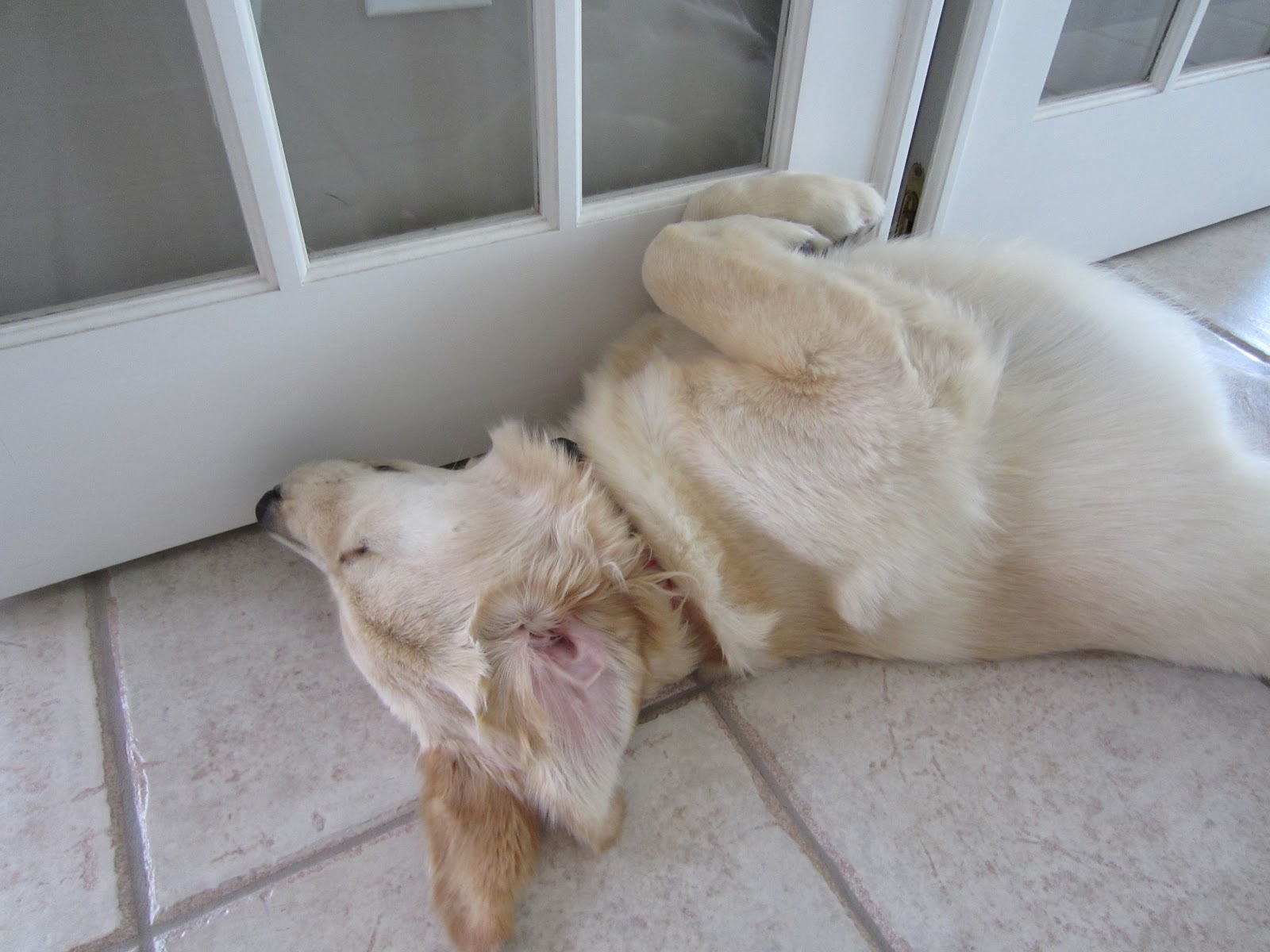 She really seemed to enjoy life without the cone!

We had to put it back on at night

because we couldn’t watch her then.

But I think by about the 3rd day

we decided she wasn’t trying to lick

so we didn’t make her sleep with it anymore. 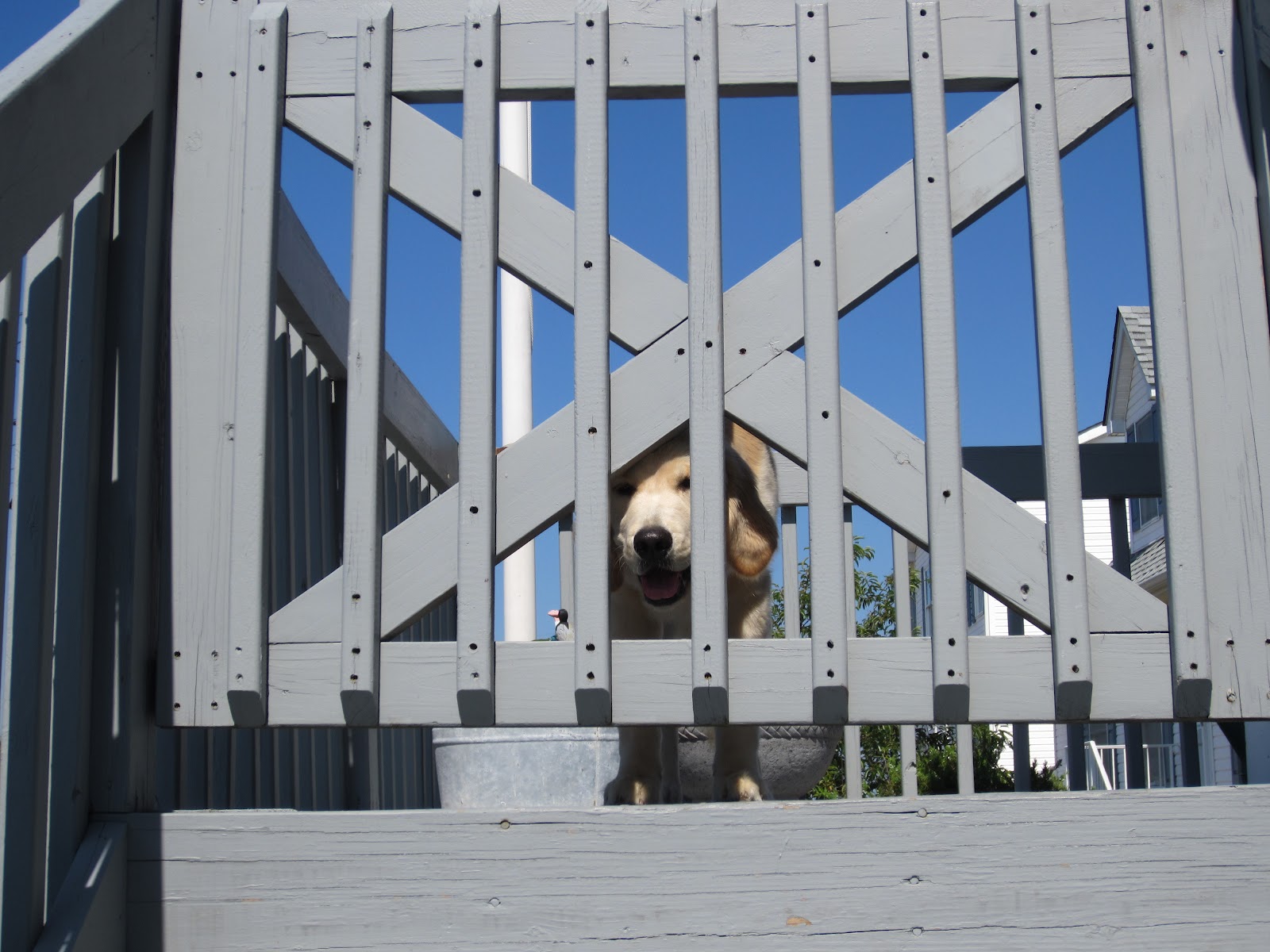 But we had to keep her from exercising too much

so she couldn’t join us in the parade on the 4th. 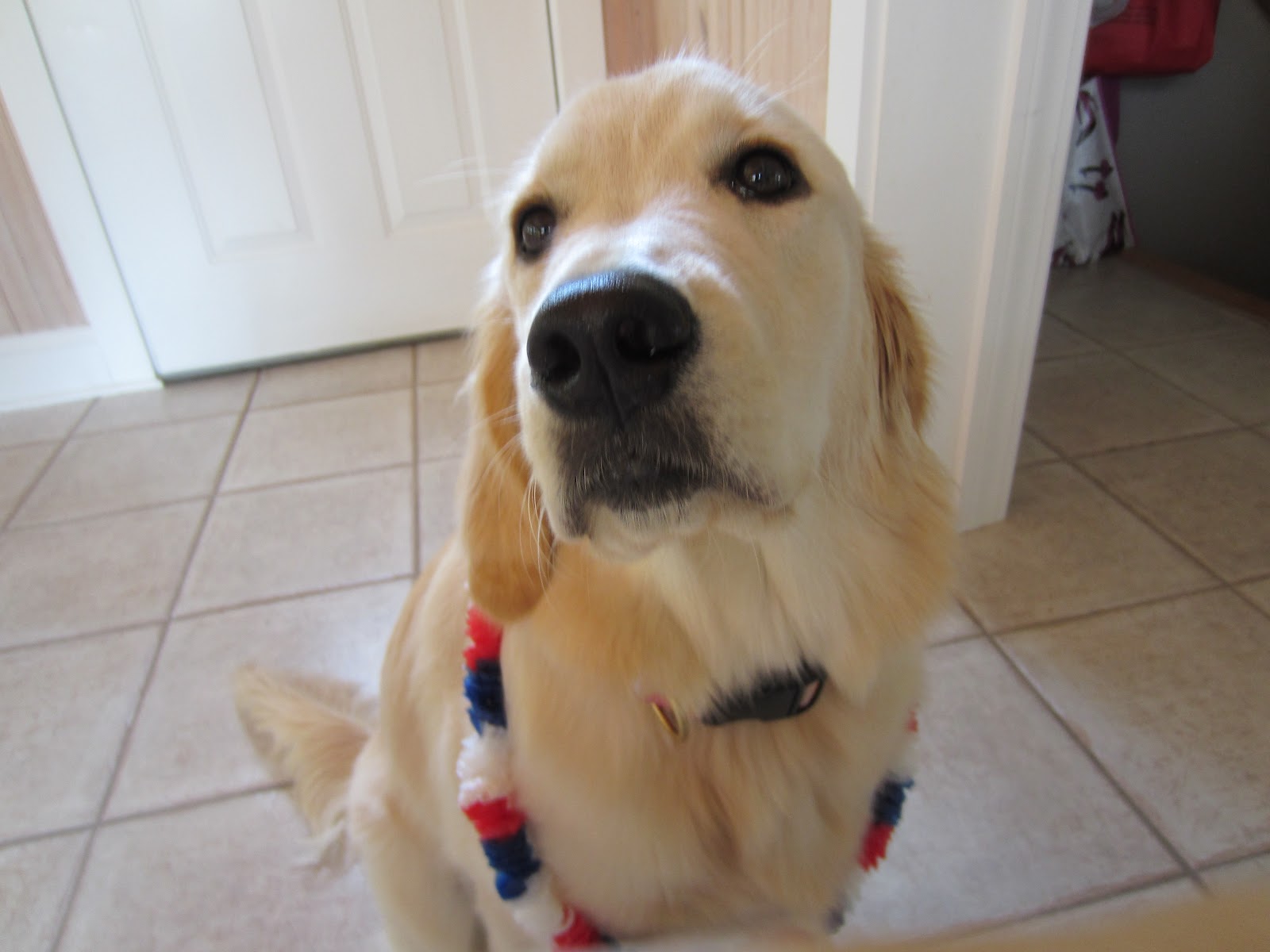 She dressed up for the holiday anyway! 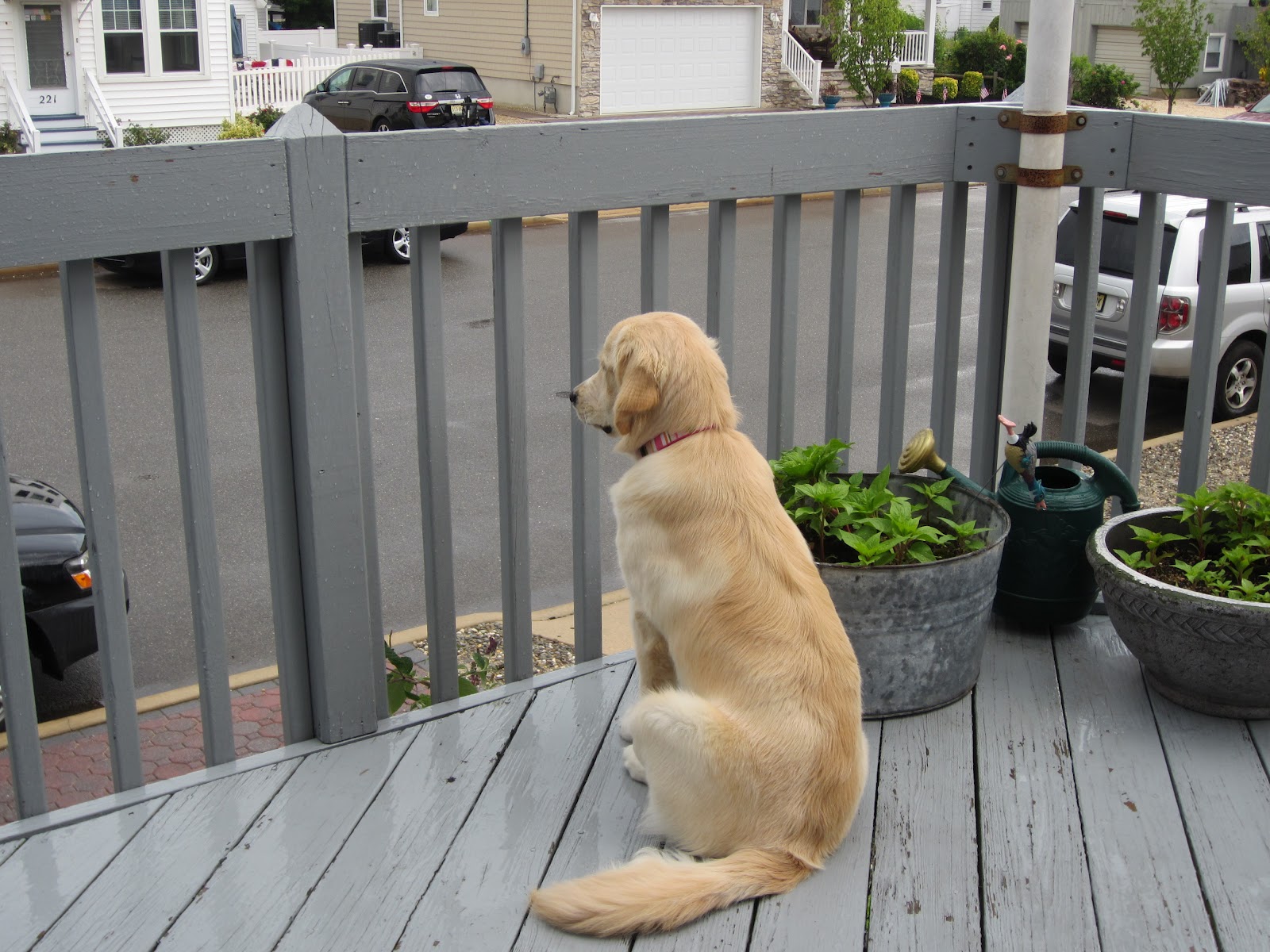 She couldn’t run around much

but she did enjoy watching the activity on our street

each morning from the deck.

And as I mentioned last week,

she had to be CARRIED up and down the stairs

every single time she had to go out.

It was a pain,

but SO worth it

once I realized what a workout I was getting!… 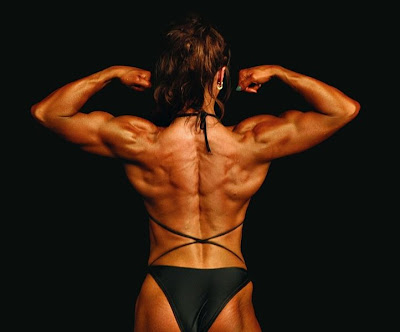 I would have rather been extra cautious

than have her injure herself!

while I held her leash.

She enjoyed her week at the shore

and was well behaved the whole time.

She wasn’t even startled by the fireworks crackling outside

or by the strong thunderstorm that rolled through!

(But Clover was freaking out and had to take Valium!) 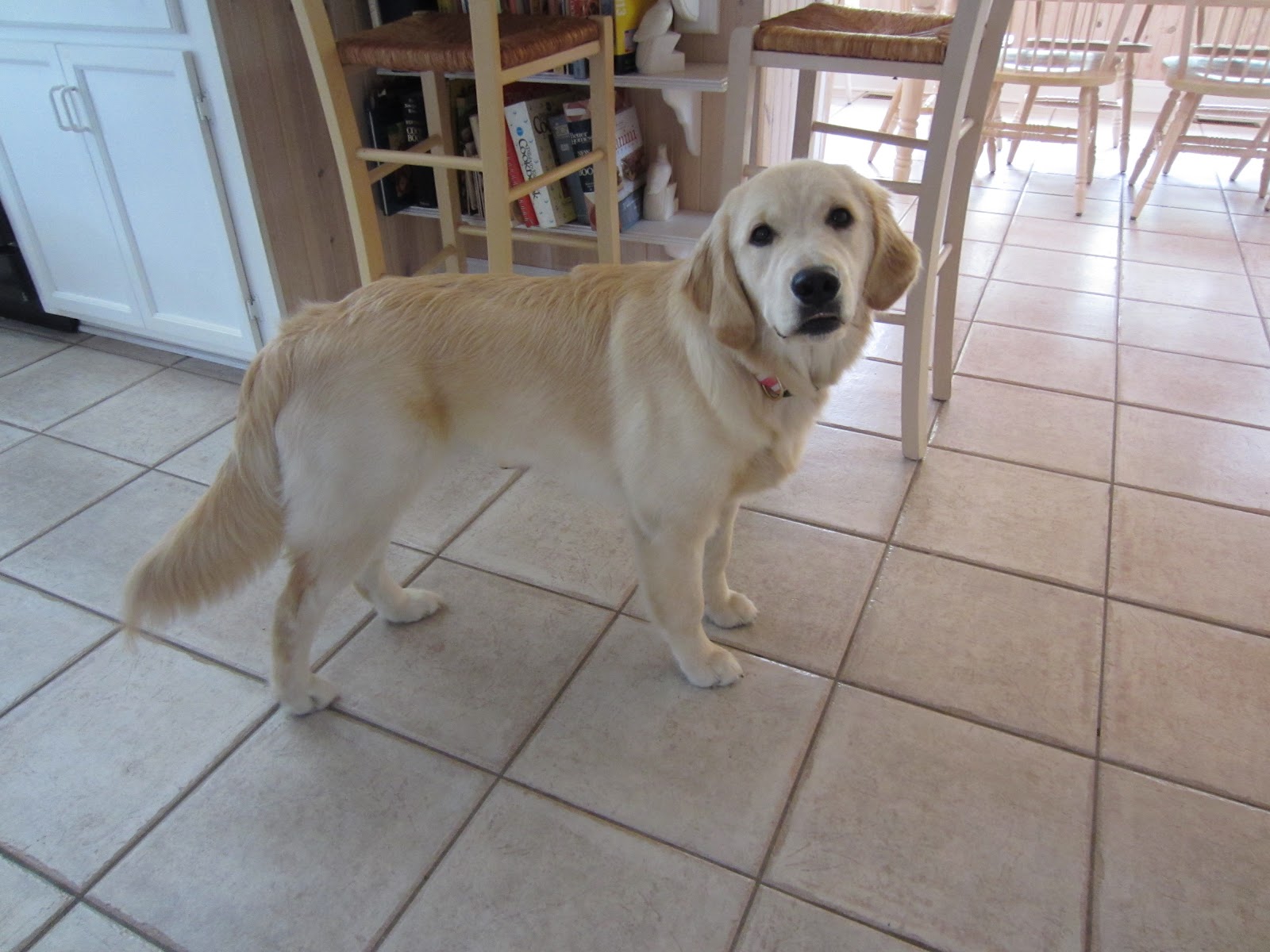 She even slept in our room at night

because I didn’t bother lugging that crate down there with us!

And last night when we got home,

I didn’t even try putting her in it to sleep.

She stayed downstairs and behaved herself all night.

I think we are officially done with that crate now!

It was a great week at the beach for all of us!

Have you brought any pets on vacation with you?

If you have a dog, how do they handle thunder?

Happy weekend and welcome to the Saturday Spotlight!  Now that summer is in full swing, the temperatures seem to be in full scorch-mode…especially here in the northeast!  Actually, I think much of the US has been experiencing the same crazy hot weather.  If you’re going to be outdoors, remember to stay hydrated.  To help you out,…

No, not beer… Although my iced tea does look like beer in this picture! Well, it is Friday. Maybe I should be reviewing a cocktail recipe… (Who is that ball of fur trying to get in the picture?!!) Actually, today I am reviewing my Picardie Glass Tumblers from Williams Sonoma. I agree, the above picture…

I always love Alison’s “Favorites on the First” parties over at her fabulous blog, The Polohouse. While I don’t always have something to contribute, I do enjoy viewing what other bloggers have posted. This month, I can join the party! The theme is: “My Favorite Chair”. I actually chose two… I chose one for being pretty…

My eight year old has been fed up with the baby blue color of his room for some time now. I keep promising him I will make his room more grown up.  (I did a post on this a few months ago –Choosing Colors.) Today, I took the first step. I went to Benjamin Moore…

Today I am writing my post specifically for Sarah’s Modern Country Style Define Your Blog Link Party! After you are done here, go over and check out her blog! Welcome to Calypso In The Country Come on in… Hello everyone, I am Shelley and I just love the Caribbean. I have traveled there at least…

Travel websites will be crashing… Travel agents’ phones will be ringing off the hooks… Because last night’s Bachelor would make anyone fall in LOVE with the island of Anguilla! How can you not book a trip there after seeing last night’s episode?!! The show truly managed to capture the beauty and charm of the island….