So, I have mentioned before that my husband is very practical.

A few weeks ago my 10 year old son decided to clean up Mommy and Daddy’s old bikes that have been collecting dust in the garage for the past 15 years.  Yes, 15 years…pathetic.  I know it has been that long because we just celebrated the 15 year anniversary of living in our house.  During that time, we have not taken those bikes out for a ride.  Not once.  I think my husband bought the bikes even before we were married so I am guessing the bikes are between 18-20 years old.  We actually used them when he first purchased them but then I guess the novelty wore off.

My son worked hard cleaning up the bikes one Saturday.  He enlisted Daddy for some help with blowing up the tires and was so excited that now we could go on family bike rides together.  I was actually pretty excited too.  I took mine out for a test drive and although the gears seemed to jump a bit, it seemed to work ok.  Although, after a couple back and forth runs down our street, the chain fell off so I figured it was a sign I should get a “real” tune-up at the local bike store. 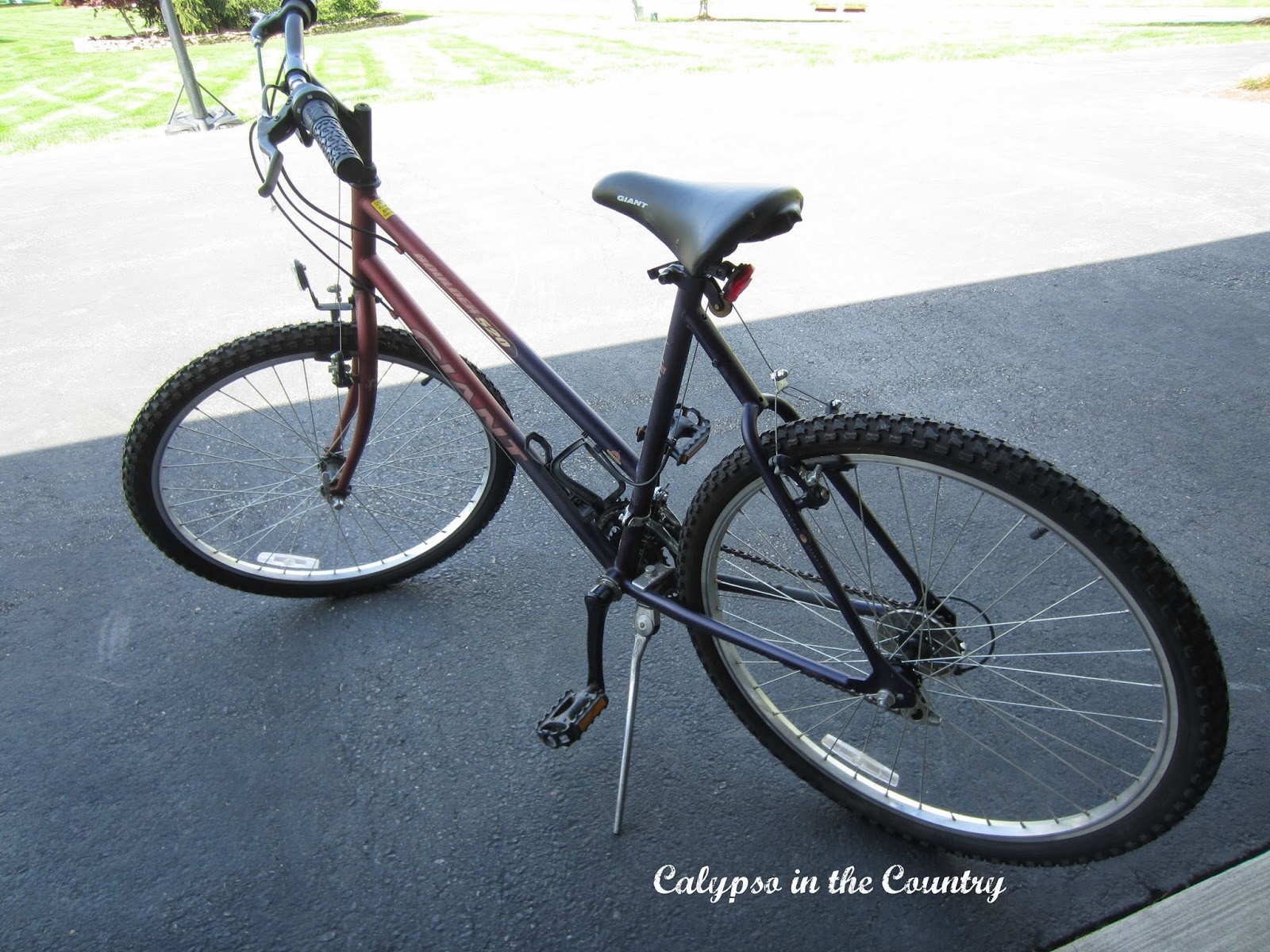 A few days later, I took the bike in and left the repair shop with high hopes that the tune up would be pretty simple.  They estimated that the repairs would cost around $70.00 and that even included a new seat I picked out.  (Mine wasn’t very comfortable.) 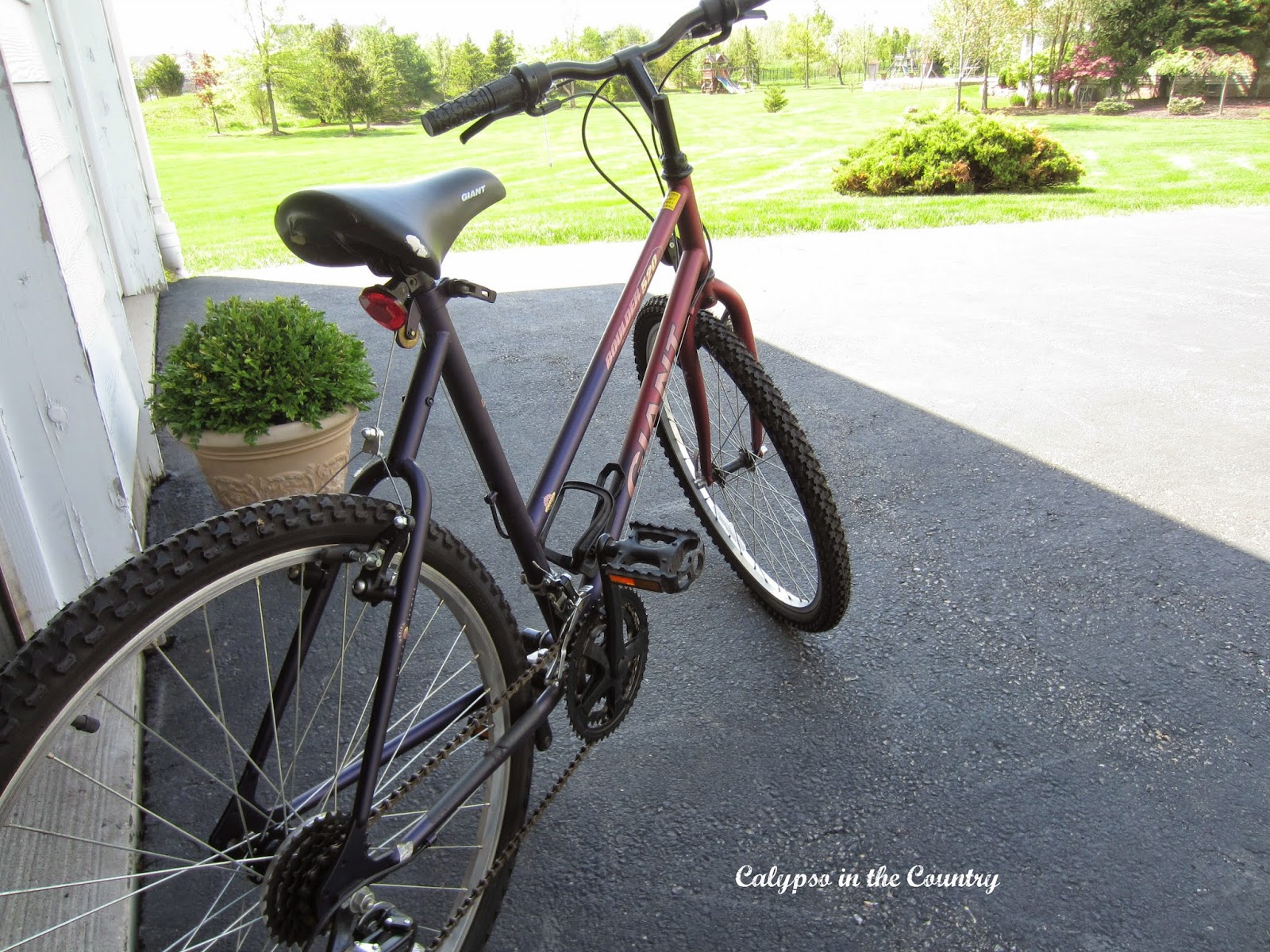 The next day I got the phone call.

“I am sorry but we are unable to repair your bike.”

I was so disappointed.  The guy rambled on about how it needed a new chain and a whole new piece for the gear shift, blah blah, blah…I don’t even remember all the things he mentioned.  He said the repair would cost at least $150.00 and that was if he was able to find the parts.  He said bikes have been updated so much over the years and didn’t know if he could find anything compatible to make the bike work.  He told me I could come pick it up or he could try to donate it somewhere.

I figured, rather than pay at least $150.00 and hope that they could find the parts, I would just buy a new bike.  It only made sense. 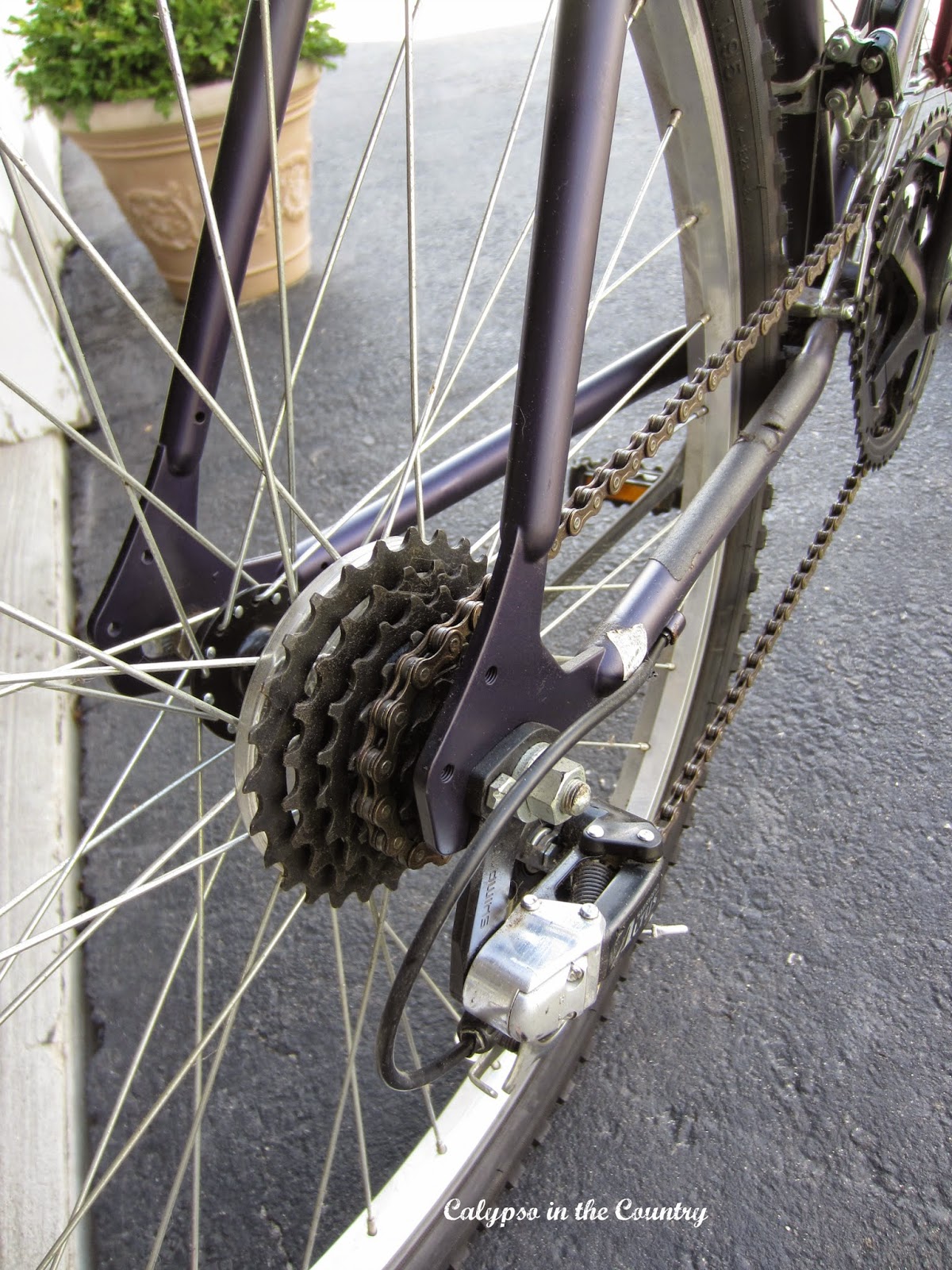 Well, when I mentioned this to my husband I made the mistake of suggesting that maybe he and the boys could buy me a new bike for Mother’s Day.  I didn’t think I was being too extravagant with that request.  After all, a few years ago for Mother’s Day, he did buy me tickets to see Keith Urban in concert!

“Mother’s Day?”, he said, “That’s more like a birthday gift!…Wait a minute!  What do you mean we can’t find compatible parts?  I have the same bike!  Maybe you can have them use parts from my bike to make one good bike!  I don’t need a bike since you are the one who wants to ride with the kids anyway!  Ask them if they could do that!”

Although this may sound like a good idea, I had visions of myself pedaling along on this jalopy of a bike while trying to keep up with my kids.  People would be pointing at me and laughing.  It was not the happy-family-riding-bikes-scene I had imagined.

That week at the bus stop, I told my sad bike story to my neighbors.  My one neighbor said, “How funny!  It will be like a Frankenbike!”  Oh yes, that is just what I wanted; to be the laughing-stock of the neighborhood!

I continued to tell my story to other friends during the week.  I wasn’t sure if I was looking for sympathy, a good laugh or maybe just some reassurance that this wasn’t such a bad idea.   I mostly received laughs and comments like, “Why don’t you just buy a new bike?!” 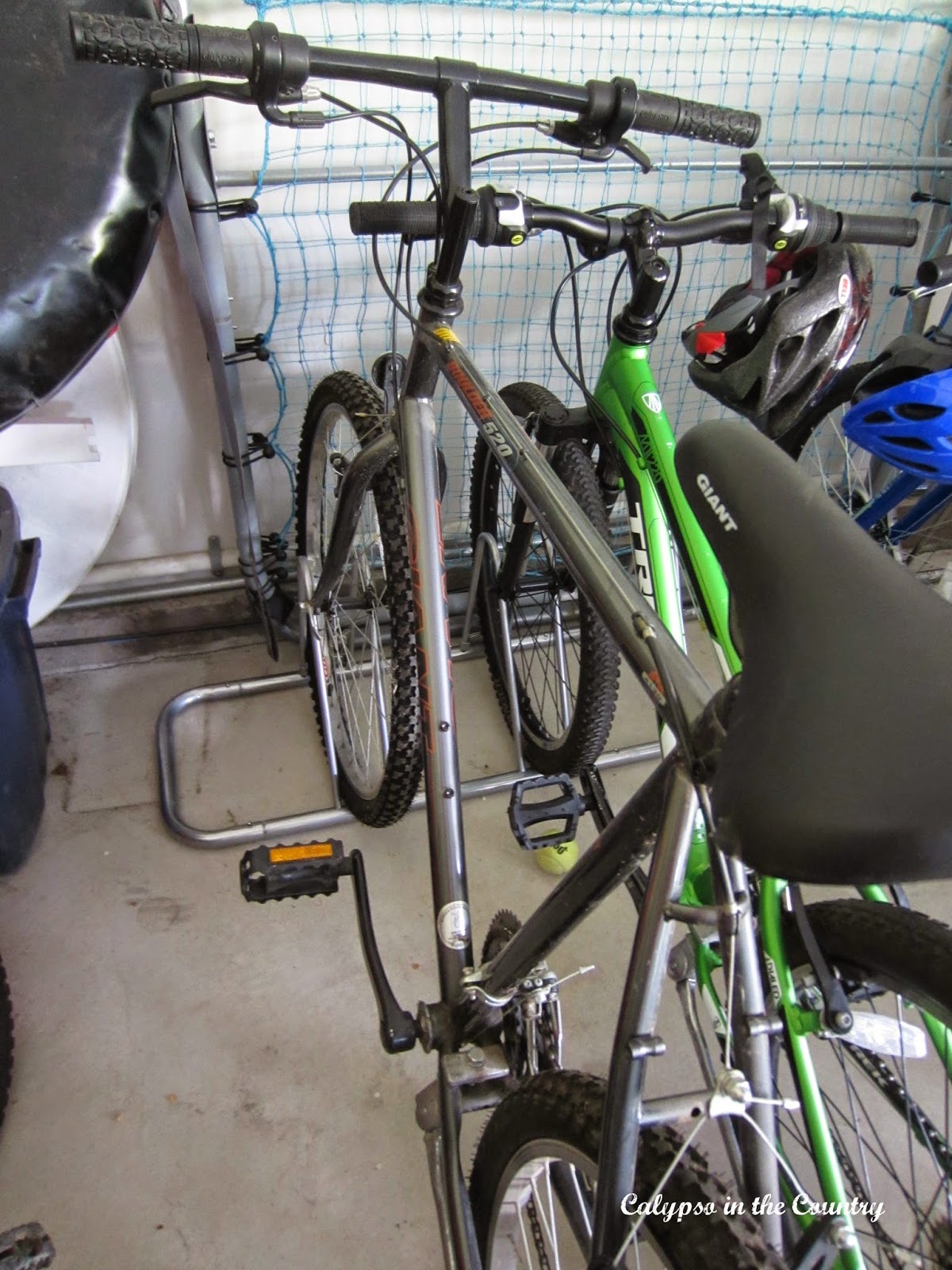 So this past Friday, I grudgingly loaded up my car with my husband’s bike and arrived at the bike shop with my embarrassing request to combine the two bikes.  Right away the guy says to me, “We have a new policy.  We no longer repair bikes older than 14 years old.”

Hooray!  What a break for me!  But since I dragged that thing down there, I insisted that he look it over so I could tell my husband that I did indeed do all that I could to salvage at least one of the bikes.  The bike guy compared the two bikes but seemed like he wanted nothing to do with them.  He told me that their bike shop doesn’t want the responsibility of fixing a bike with old parts and having someone get injured because of it.  I was more than satisfied with his answers so we loaded both bikes back in my car and I headed home.

I informed my husband of the results, (without trying to sound too happy about it) but the conversation didn’t go much further.  We were running the kids around with baseball and had so much going on that evening.  I also had this slight fear that my husband would come up with the bright idea to send me around the state of New Jersey in search of another bike repair shop to build this “Frankenbike”! 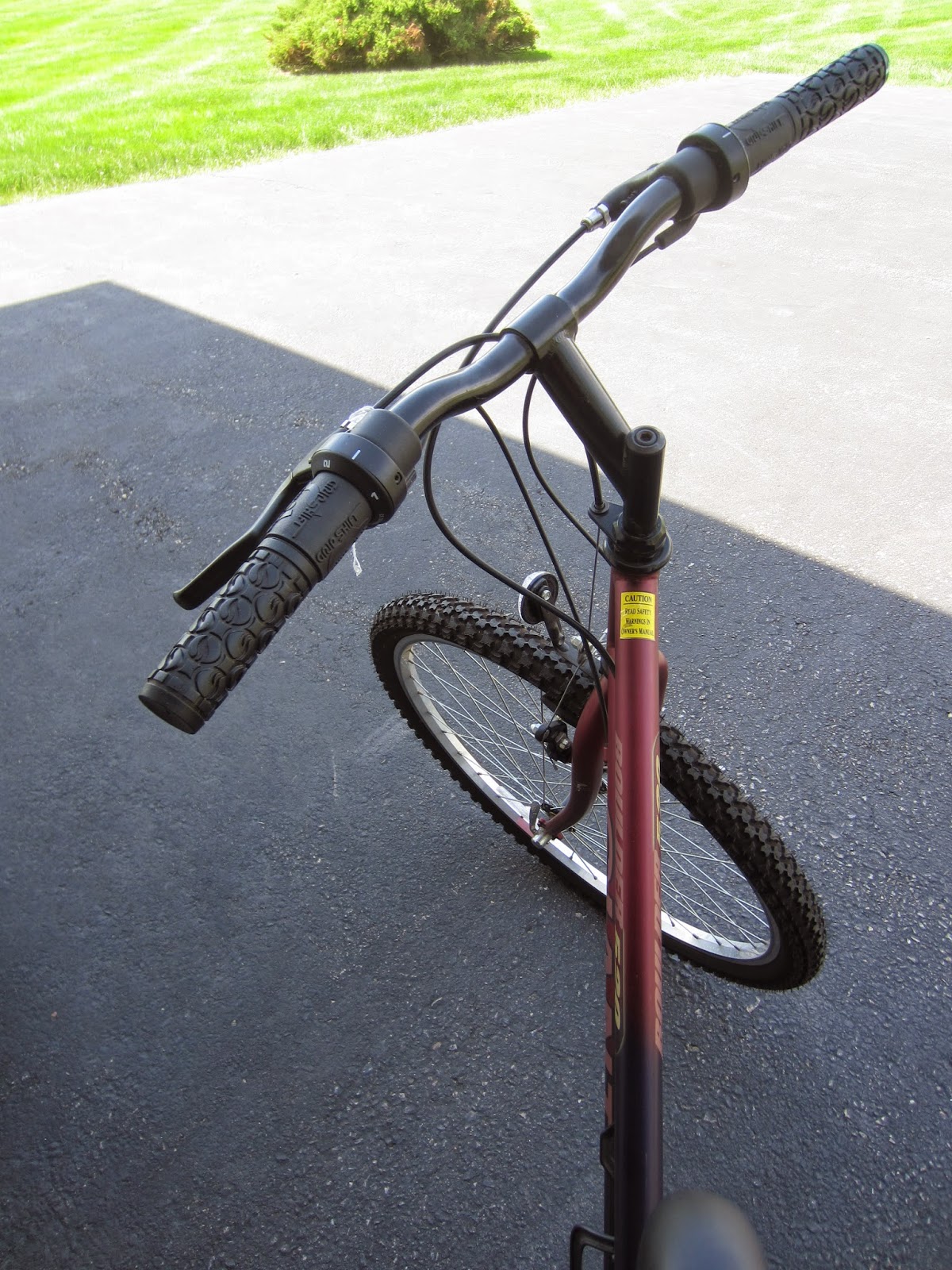 Then yesterday I opened my Mother’s Day card… 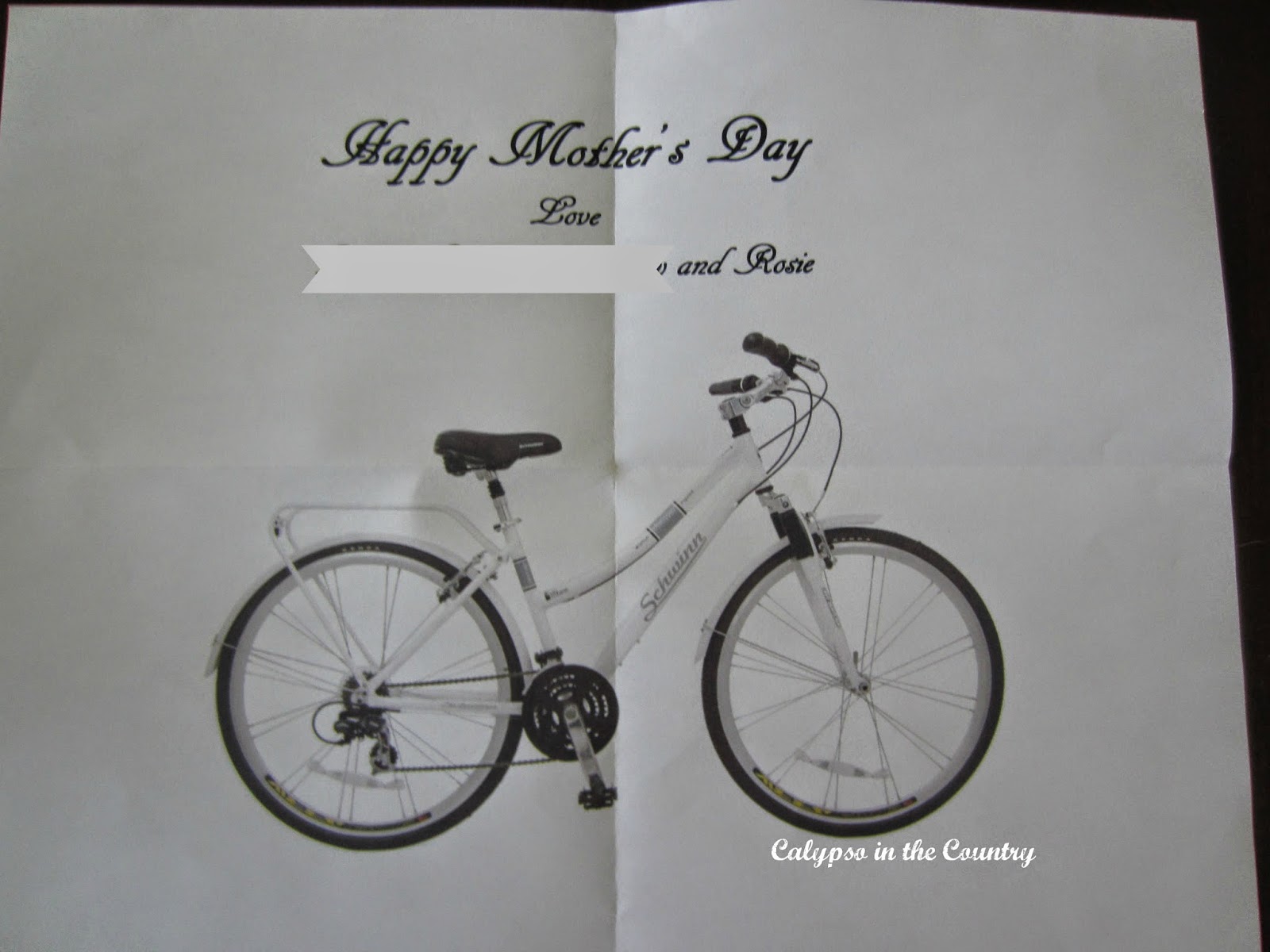 This lovely sheet of paper was inside.  Apparently the whole bike-combining idea was a plan to throw me off from guessing that he and the boys were buying me a new bike for Mother’s Day!

My husband told me he called the bike shop on Thursday and told them NOT to repair my bike because he would be buying me a new one.  No wonder the repair guy was acting so uncomfortable on Friday when I insisted he look over my husband’s bike as I continued to ask him questions!

After all these years of marriage, my husband still continues to surprise me and make me laugh!  He really got me this time!

So, this week, I will be heading back to the bike shop to pick out my shiny new bike!  I will also be “back-peddling” all my silly comments I made to my friends about my husband’s crazy bike building scheme.  I should have given him more credit!

And my husband?  Well, he says he is still going to try to get his bike repaired.  You know, he is the practical one.  Who knows, maybe he’ll be the one who ends up with a Frankenbike after all!

Did you have any memorable Mother’s Day gifts?

Many of you are sending your kids off to school in the next few weeks.  Here in New Jersey, the kids start after Labor Day so basically we have another month left of summer fun.  (Don’t be too envious though, our kids don’t get out of school until mid-June!) Anyway, the other night while doing…

It’s almost all fun and games living with Rosie.  She is always ready to play and will grab a toy the second someone enters the room. Or a sock… She is always rolling around the floor with something… or someone. Last night Rosie had the opportunity to roll around with some other dogs.  While we…

Each December, I like to make a list of my favorite posts from that year. There is no particular order… These are just my favorites for various reasons. Please click the link below each picture to take you to the full post. My favorite table setting of the year… Because it was so much fun…

I can’t wait to read all the Haven Conference recaps from this past weekend in Atlanta.  Unfortunately, I had to miss the conference this year but you can read all about my experience as a “newbie” there last year – Haven Conference – A Newbie’s Perspective. And you can bet I will do everything in my…

Welcome friends!  Can you believe it’s almost Mother’s Day?  Hopefully, you have plans to spend the day with loved ones! If you need ideas for a Mother’s Day table setting, take a look at how I decorated my dining room table… Mother’s Day Table Setting in the Dining Room: In the past, we have hosted…