Two weeks ago, we headed north for a long fall weekend in the beautiful state of Vermont.  The kids had a day off that Monday, so we figured it was the perfect time to catch some glimpses of the fall foliage.  According to a few websites, the foliage was “nearing peak“.

Just a few weeks before our trip, I contacted a photographer to have some family photos done in Vermont.  Too bad as the weekend grew closer, the weather forecast wasn’t looking very promising, but a plan is a plan so we just hoped for the best! 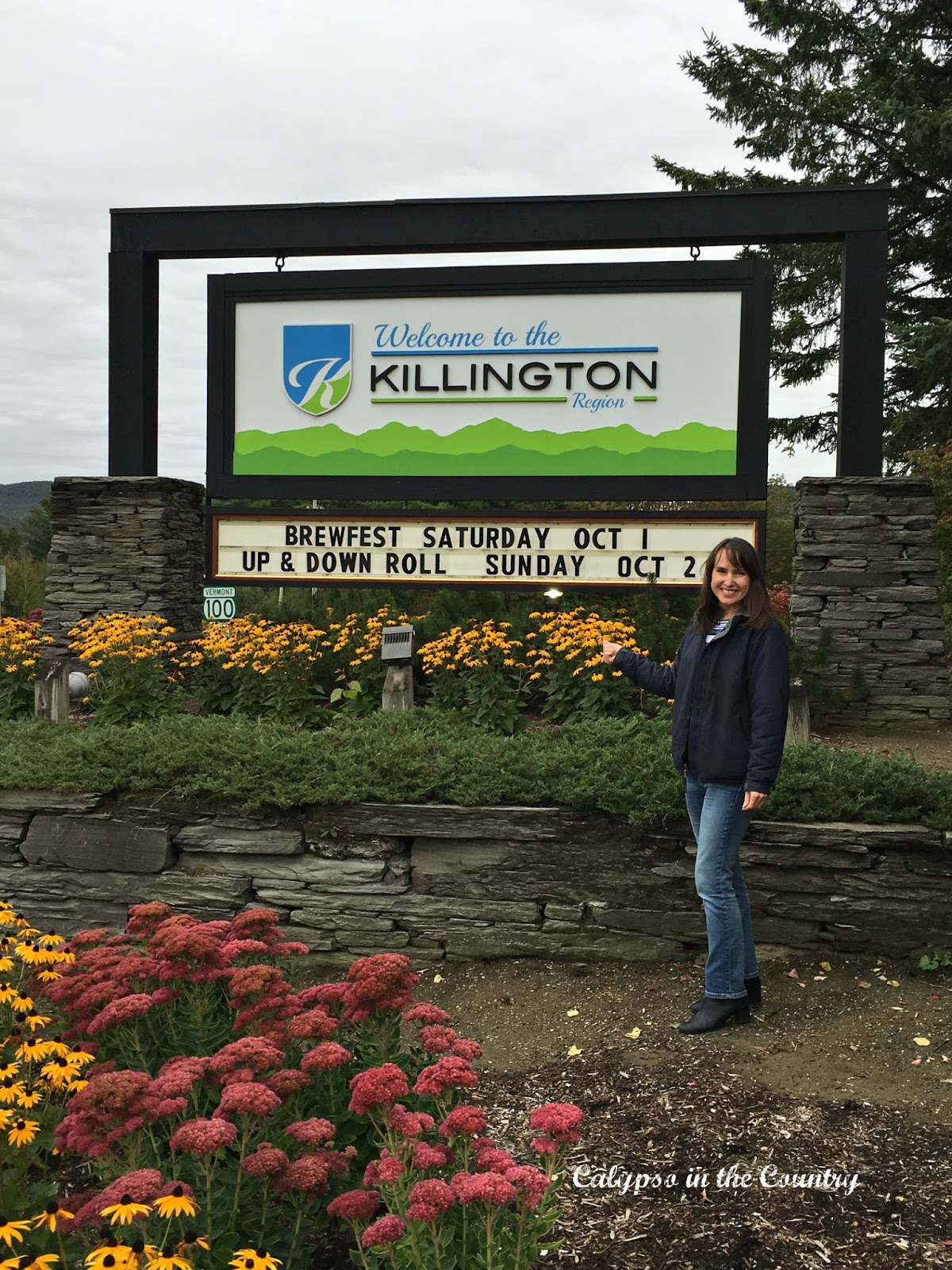 Before heading to Vermont we knew that the “Brewfest” was scheduled for that Saturday…but that isn’t why I am posing in front of the sign above.  Do you see where it also says, “Up & Down Roll Sunday, Oct 2”?  Well, when my husband saw that, he thought the “Up and Down Roll” was an event where the drunk people from the Brewfest would physically “roll” down the mountain after a day of drinking!  Always coming up with something silly, that guy!  I must admit, I would have paid to see that event!  But no, the “Up and Down Roll” ended up being a mountain bike race!

Actually, we didn’t plan on attending either of those events.  Instead, my husband and 12 year old, spent a chilly Saturday afternoon on the golf course… 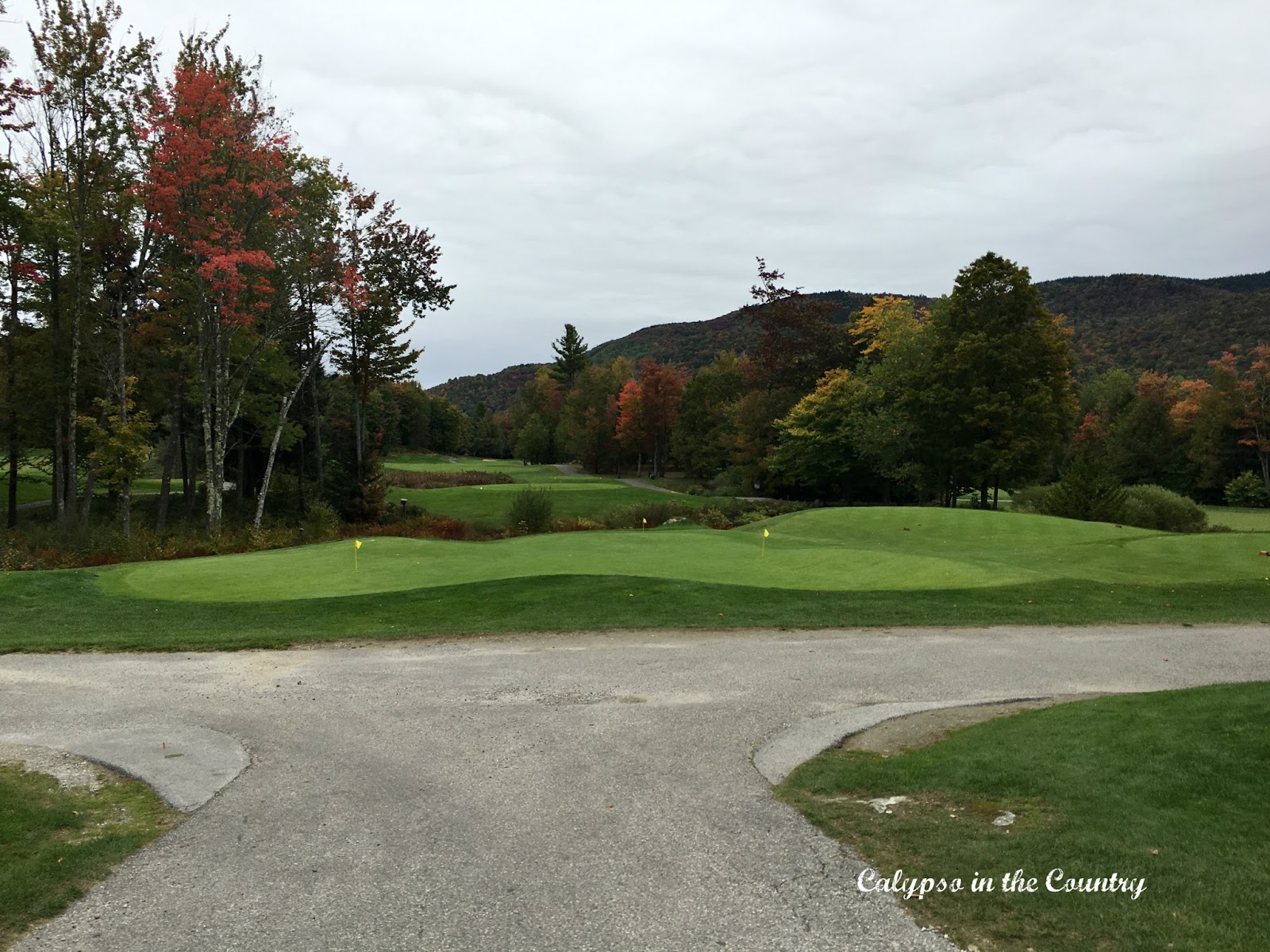 As you can see, the leaves were changing but not exactly what I would call “nearing peak“!  Obviously, it didn’t help that the skies were gray and we had on and off drizzling. 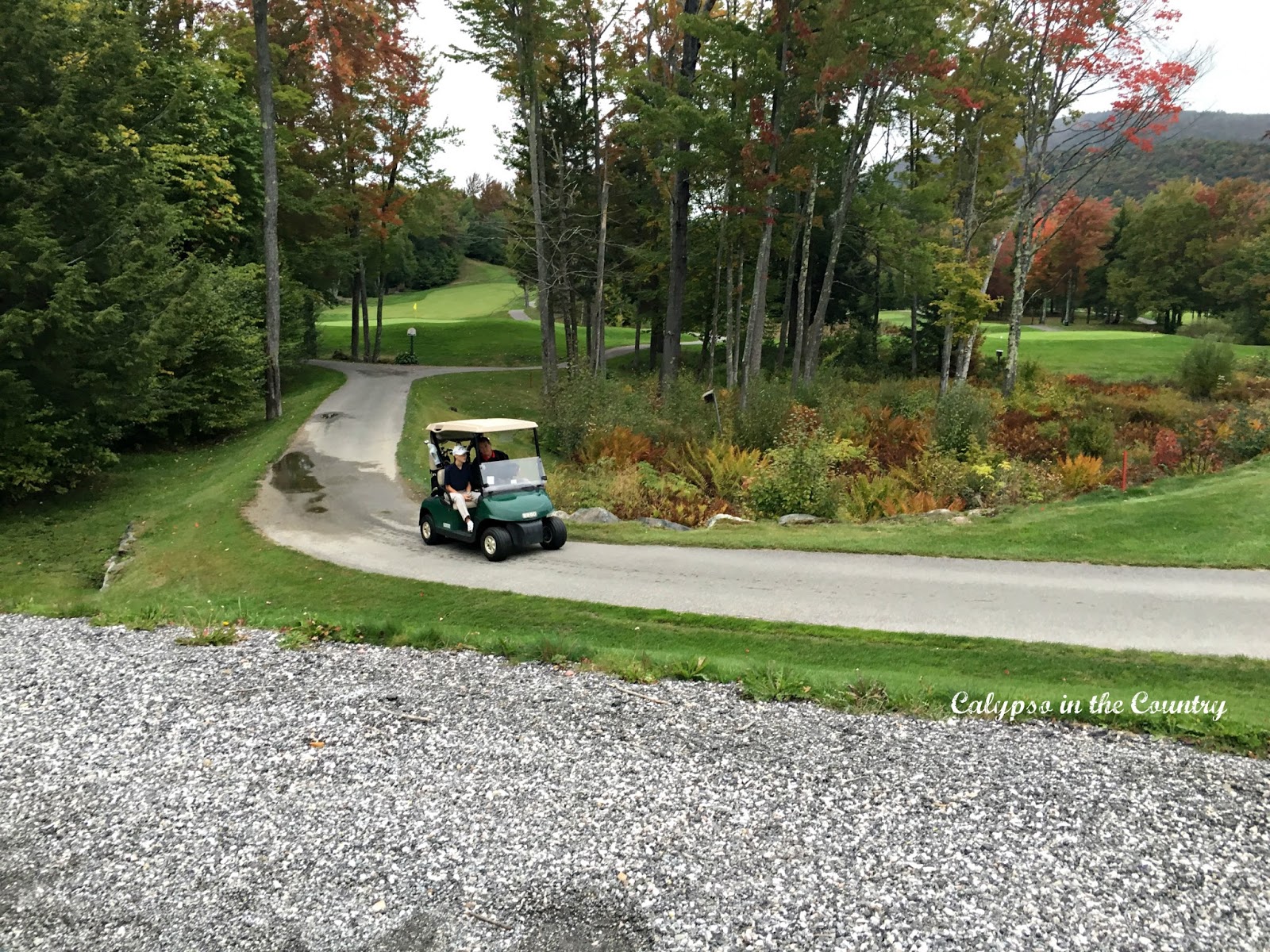 But the weather didn’t stop them.  They enjoyed some great father-son bonding time while I indulged in a little bit of bonding time with my 10 year old son… 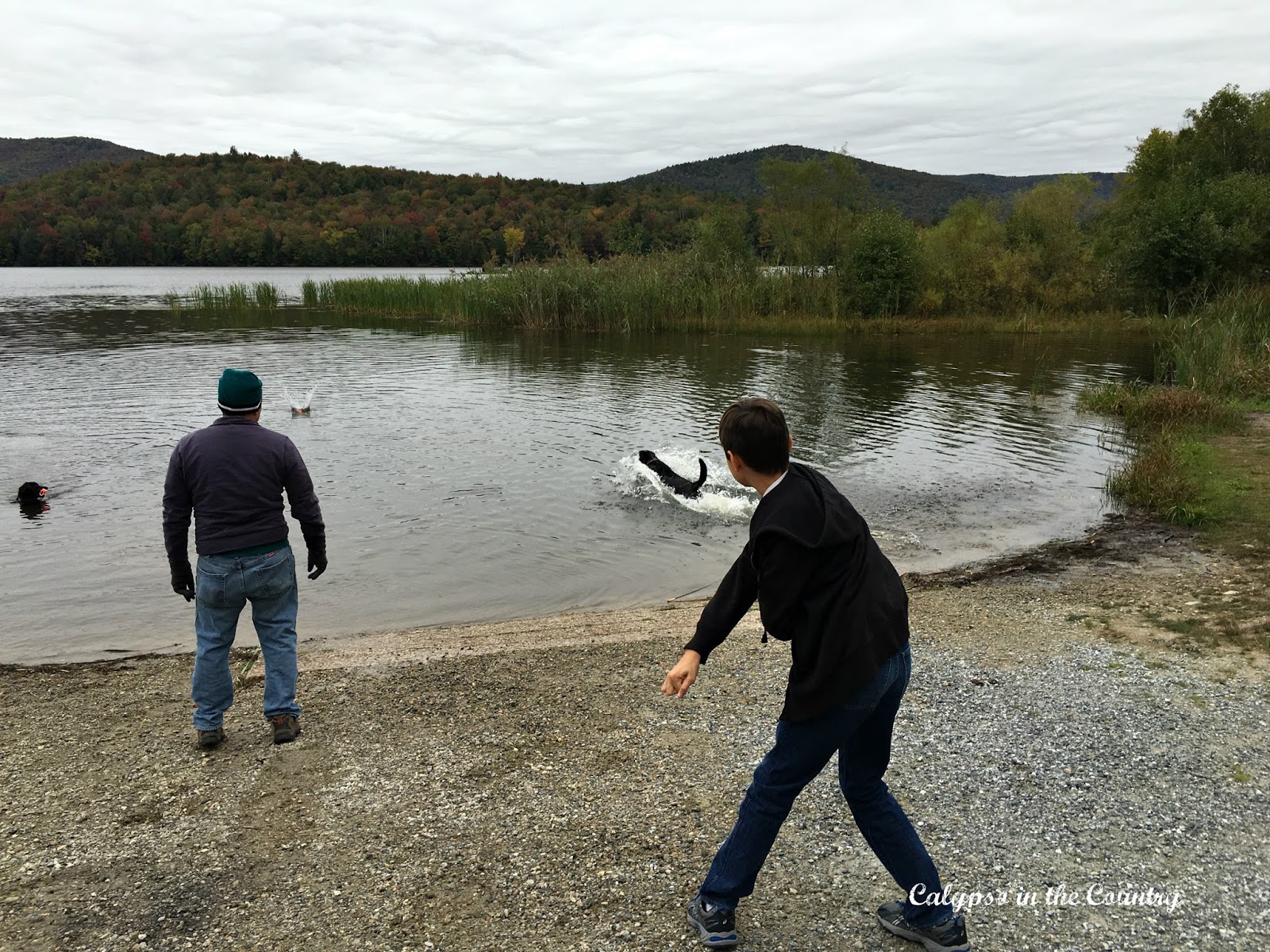 First, we stopped by Kent Pond where we spotted a couple playing with two black labs.  As soon as we walked up, they warned us that the one dog might get excited and run over to us.  I assured them we were fine with big dogs since we have our own golden retriever.  They let my son throw some of the objects in the pond for the dogs to retrieve.

Suddenly the “one dog” came charging out of the water heading straight for me.  Within seconds his pond-soaked body was jumping all over me to the point where I almost fell over.  The owners quickly pulled him away apologizing like crazy, but all I could do was laugh.  I did not expect the dog to come at me with such force.  Then after he did the same thing to my son just minutes later, we decided it was time to drag our drenched bodies back to the car before one of us ended up hurt.

Afterwards, we browsed in some ski clothing shops and then headed over to the mountain so my son could see what it looked like without snow.

Killington Mountain in the Fall 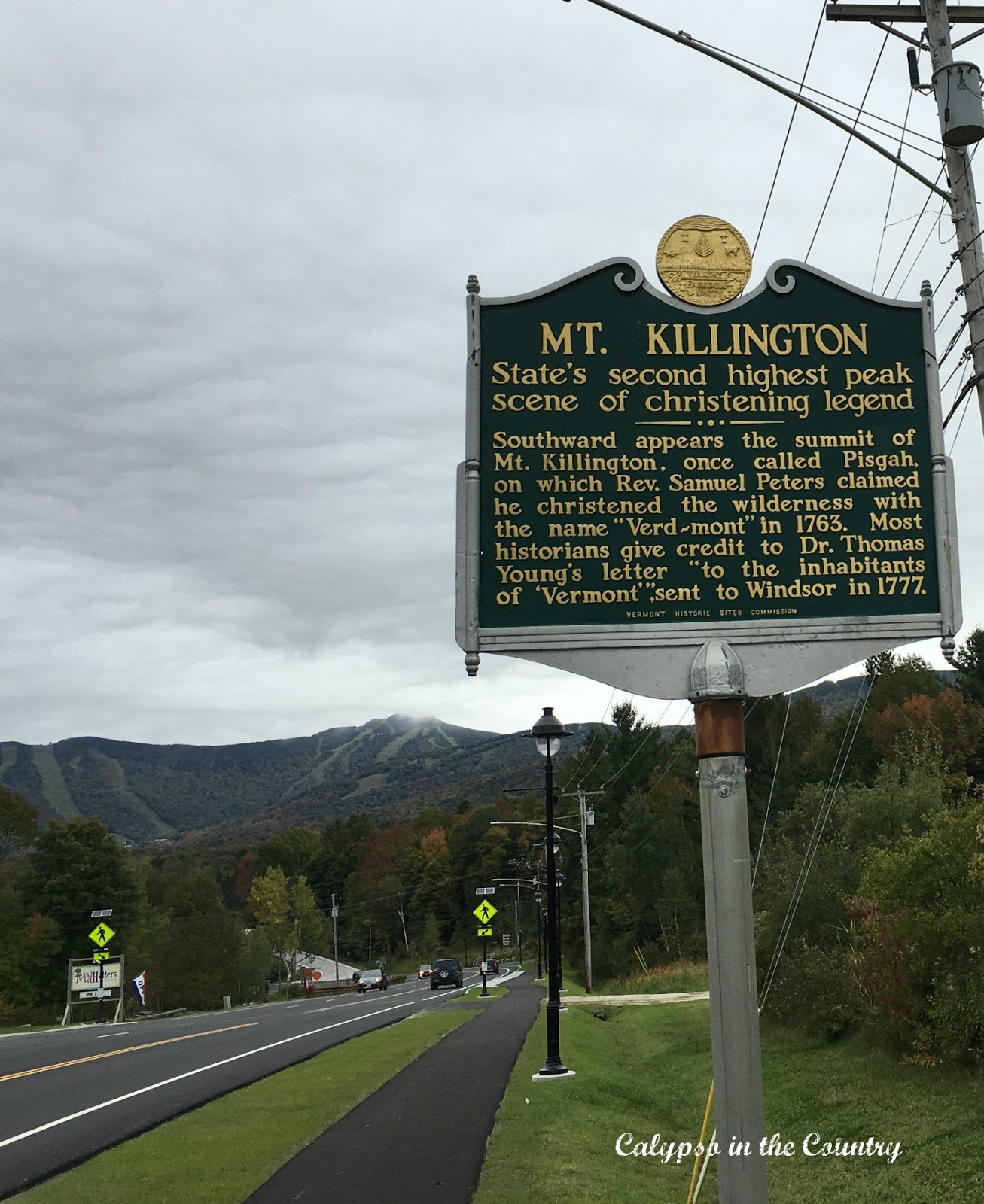 As I mentioned, the Brewfest was going on so the lodge area was packed. 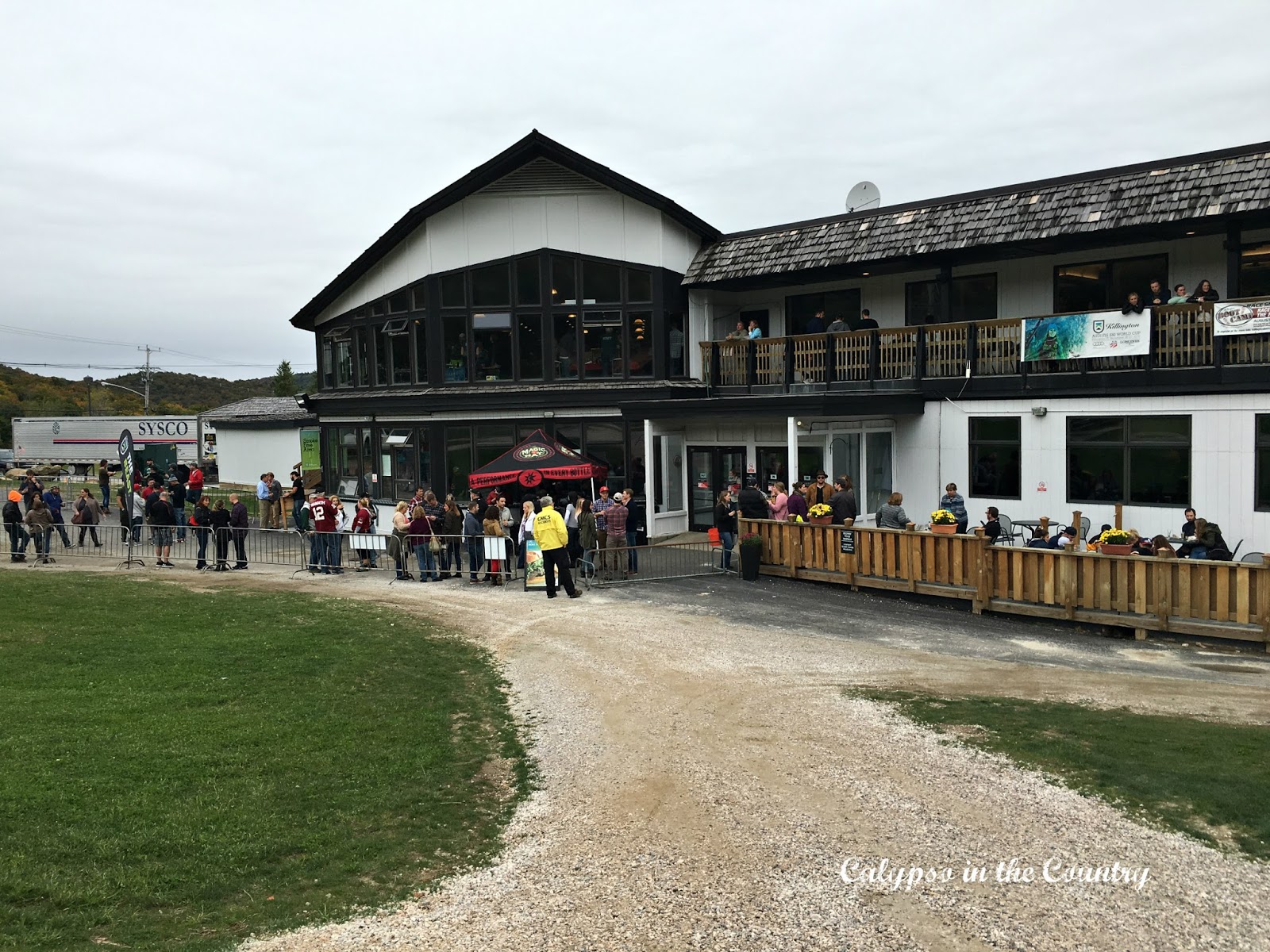 This photo shows the overflow of people on the outside but the inside was another story.  I think the whole state of Vermont was inside partying it up!  The only reason we even went inside was to use the rest room.  We accidentally entered through a no-access back door and there my 10 year old and I stood in the middle of a lodge full of rowdy adults drinking beer.  He obviously was the only kid in the place.

Needless to say, I quickly ushered him downstairs and out of the drunkfest so he could use the restroom.  He was quite fascinated by the loud music and all the commotion inside the lodge but quickly forgot about it when I mentioned we could ride the “Beast Coaster”. 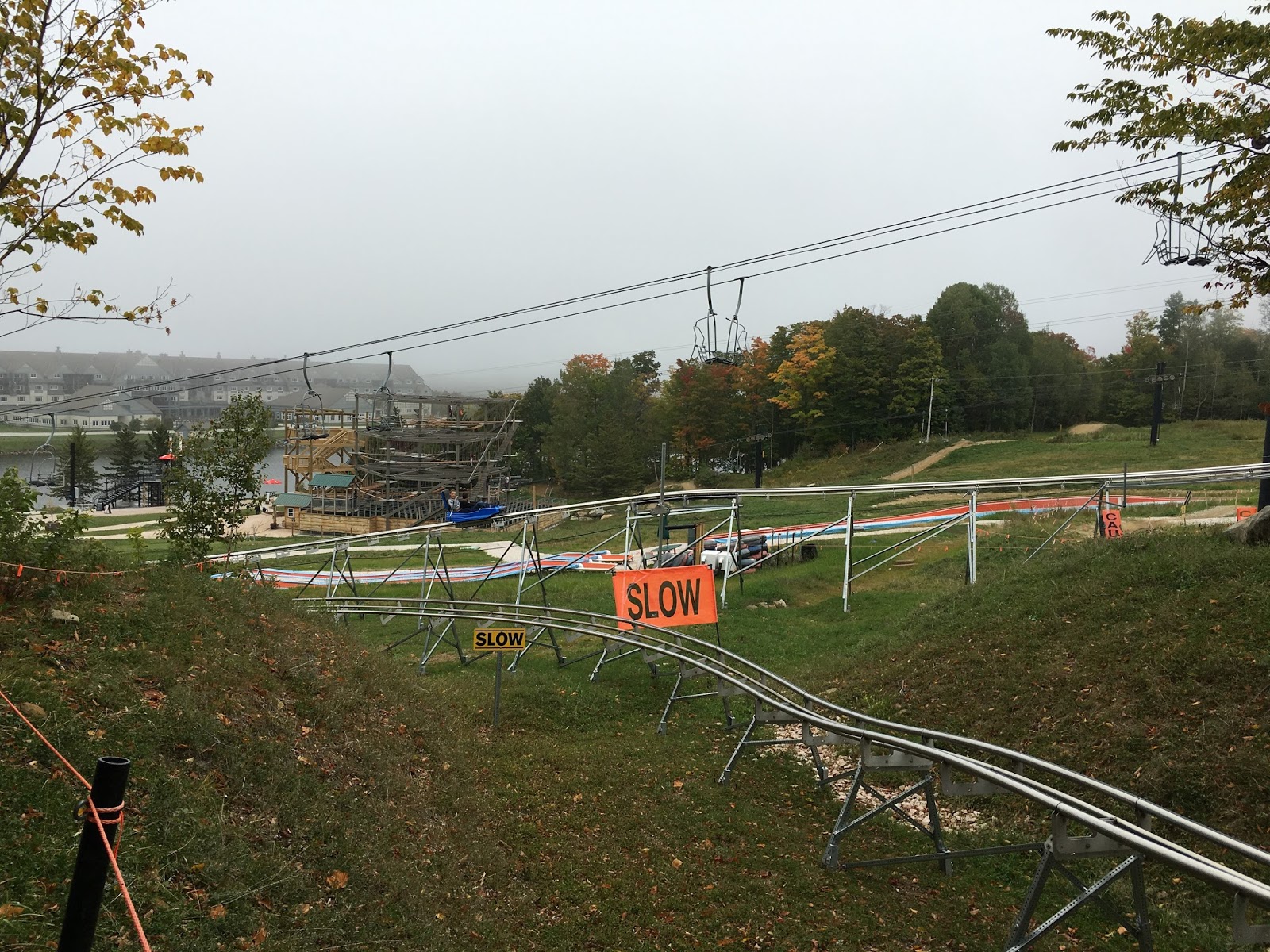 I had hoped my husband would be the one to take him on that thing when the time came around.  No secret that I am a bit of a baby when it comes to rides but I felt a little calmer knowing I could control the speed on the coaster.  It ended up being pretty scary but I made it…although I was shaking a bit when we were done.  Of course, my son loved it but wished I didn’t slow it down so much!

Afterwards, we walked around outside and did silly things like take pictures with the promotional signs… 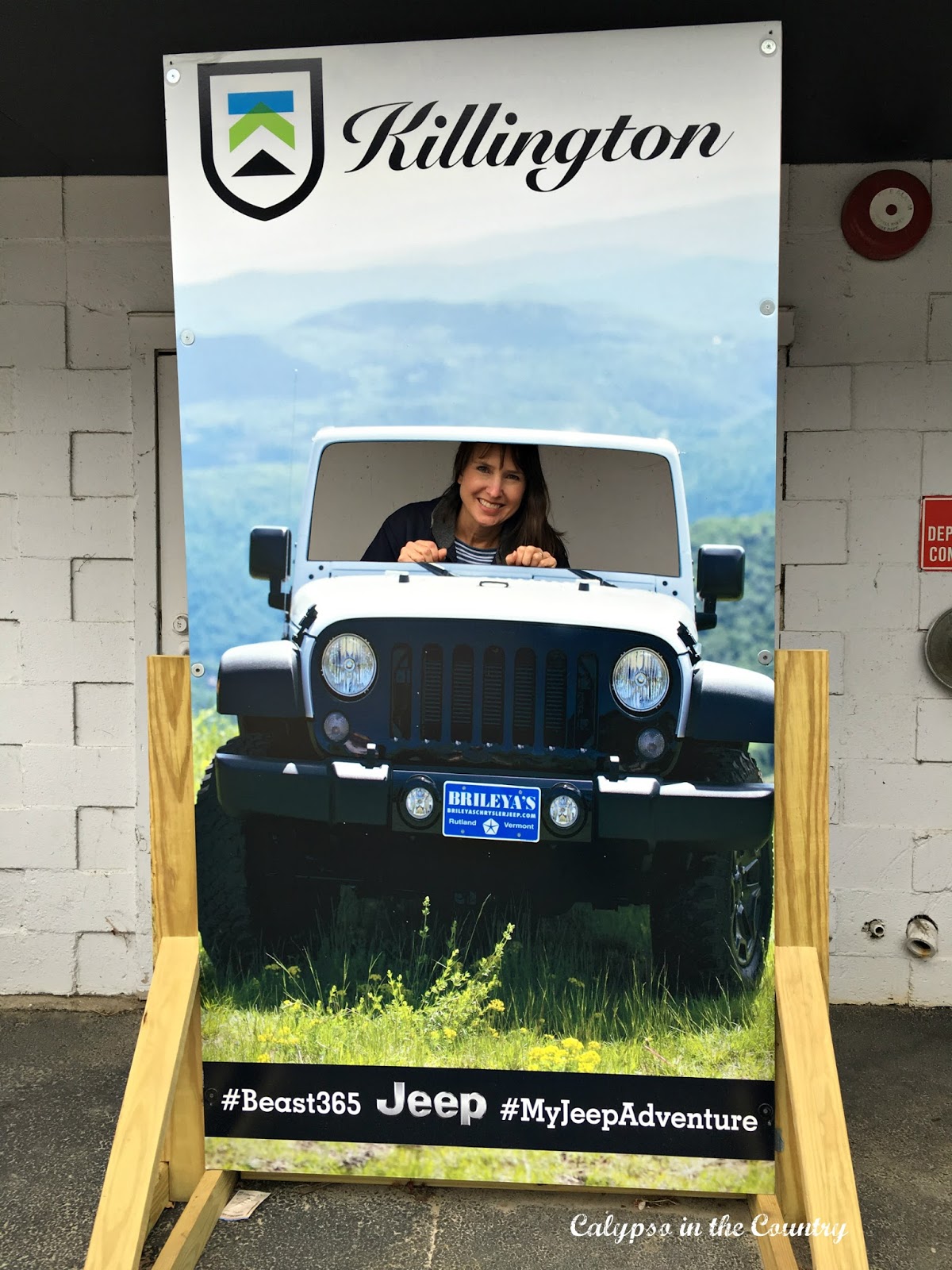 From there, we headed back to pick up the guys at golf.

The next morning we met with the photographer and had our family pictures taken with the “nearing peak” fall foliage as our backdrop.  The boys had a blast posing for photos on the ski lifts while I enjoyed our silly family moments.  So what if it drizzled and my hair probably could have looked better!  Ugh…

That afternoon while my husband plopped himself in front of the TV to watch golf (because family photos are so exhausting), the boys and I headed back to the mountain to ride the Beast Coaster again.  Silly me, I thought one ride for the two of them would have been enough so I bought one ticket for each of them. 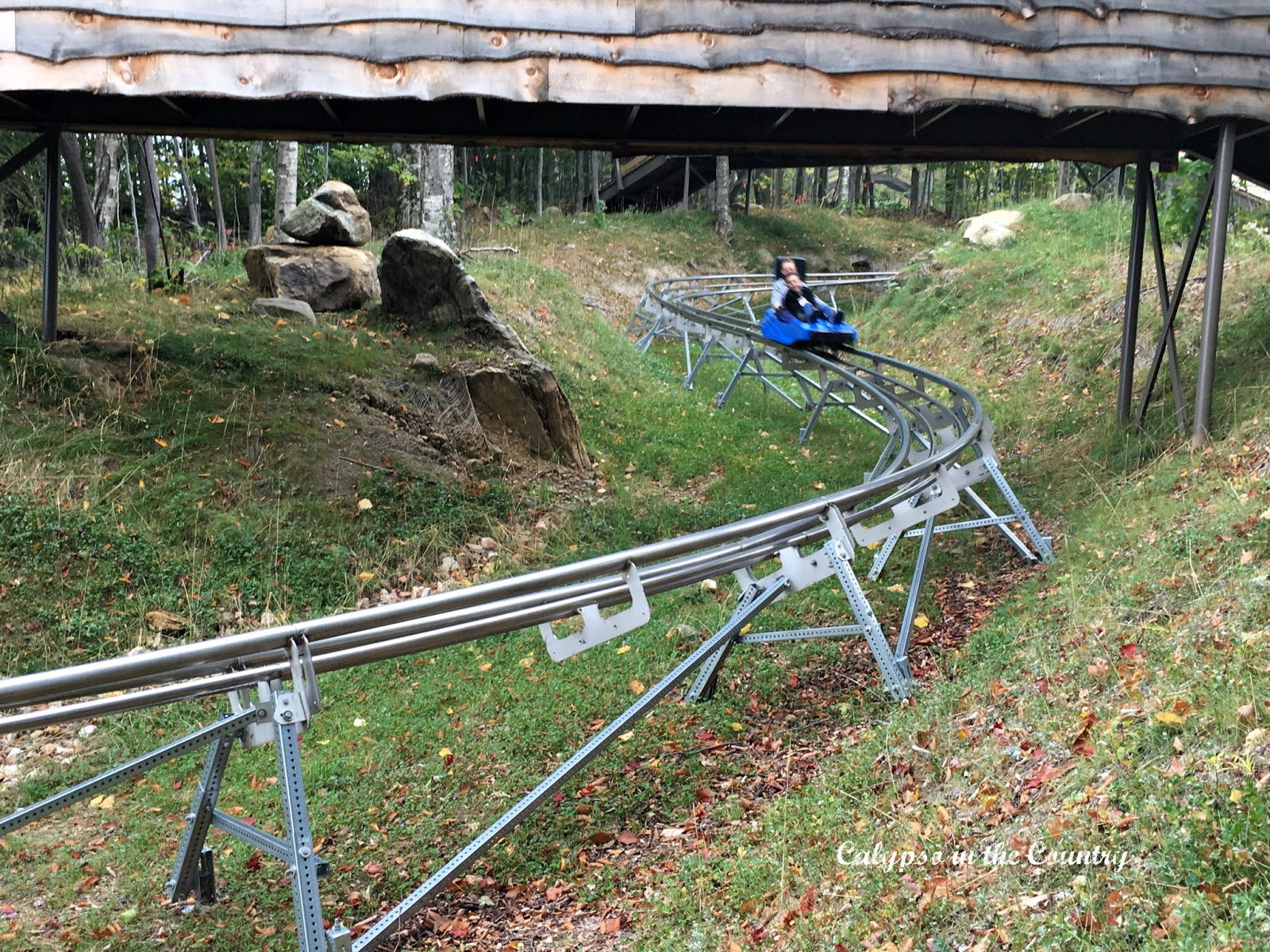 Well…those boys of mine could not get enough of that thing especially after my younger son realized how fast he could go without Mommy controlling it!  We ended up purchasing the full day adventure pass which included all kinds of climbing mazes and trampolines in addition to the Beast Coaster.  Apparently, since the weather was chilly and drizzly, not many people were around (and most were probably hung over from the Brewfest).  Luckily, the boys didn’t have to wait in any line for the Beast Coaster.  I actually lost track of how many times they rode that thing!  They also tried out some of the other attractions… 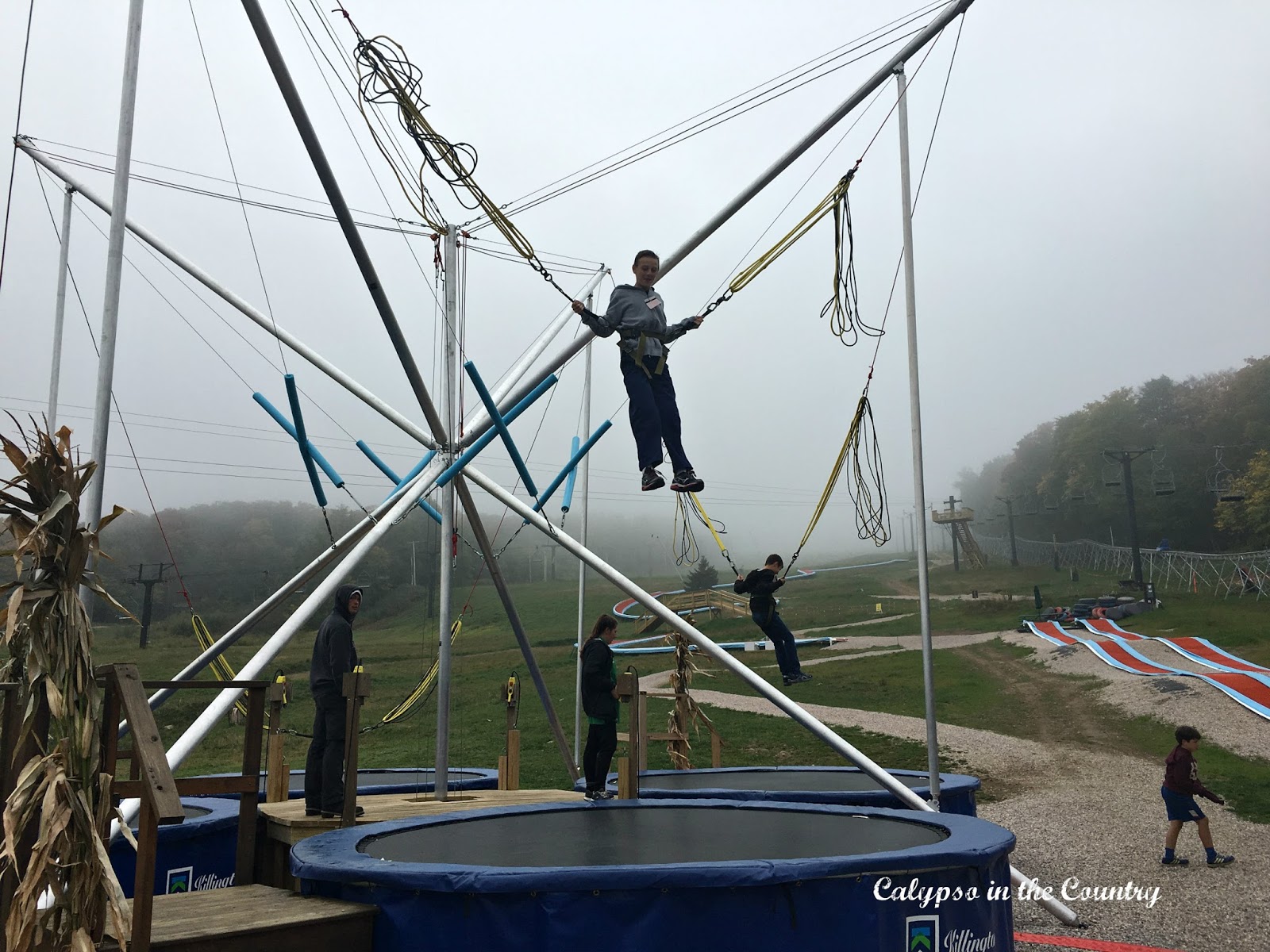 They ended up having the best day and are still talking about how many times they rode on that coaster!

So, the weather was not ideal and the foliage wasn’t exactly “nearing peak” but we still enjoyed a fun-filled family weekend that we will remember.  That’s all that really matters, isn’t it?

Here are a few more Vermont-in-the-fall posts from previous years:

Have you ever spent a fall weekend in Vermont?

Happy July everyone!  Many of you are probably on summer vacation this week so thanks for taking the time to stop by.  Our family just spent a few days at the Jersey Shore and thankfully had perfect weather.   After a rainy spring, we are finally enjoying gorgeous weather in the northeast.  Sure, it’s becoming hot…

Welcome to the first Take Me Away Link Party of 2017!  I am so excited for the new year and I am so excited to see where you have been! Let’s get started with this month’s party! Please link up to 3 travel posts you have written (new or old as long as you haven’t…

Now that the temperatures have cooled down, I would like to share some fun places to spend a fall day in the central New Jersey area. Actually, the weather has been lovely for the past month, just warmer than usual.  Now that it’s cooler, I have been trying to spend as much time as possible…

Well, hello September!  Wow – that summer flew by didn’t it?  As always, on the first Friday of each month, I welcome you to link up your travel posts.  We always start a little early so the party is open now!  We are looking forward to seeing where you have been lately… But before we…

This past Thursday and Friday, New Jersey schools were closed for the annual teachers convention. Last year our family (and probably half of the New Jersey) went to Disney World. This year we stayed a little closer. We took a road trip to Vermont for the weekend. We knew November would be a little early…

Today, June 8th is World Oceans Day and I thought I would celebrate by reminiscing about our honeymoon seventeen (wow) years ago this week! Sure, I might be coughing up construction dust at the moment but it doesn’t stop me from dreaming of the gorgeous blue waters of the Hawaiian islands!  We spent about two and a…