This week I will be posting a week of reviews.

Monday through Friday I am going to write a review each day.

Ok – so Monday thru Friday is just 5 days
so just think of it as a “business week” of reviews!

My first review of the week is a concert review.

Last Wednesday, my sister and I had a night out
at the Allentown Fairgrounds in Allentown, PA

to see the Journey/Foreigner/Night Ranger concert!

Some Allentown trivia…
Allentown, PA is an old steel town made famous
by the Billy Joel song, “Allentown”.
The Allentown Fair is one of the oldest fairs in the US
which started as an agricultural fair in 1852.
They started hosting concerts in the 1960’s,
and in fact I saw my very first concert there:
The Captain and Tennille!

As you may know,

I am a big Journey fan.

I have followed them over the years

through several lead singers and changes.

I have always enjoyed their music

and the concerts have always been a lot of fun. 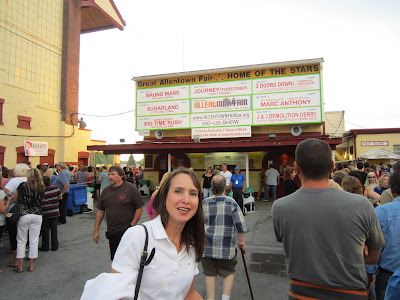 Wednesday was a beautiful evening and the fairgrounds were packed.

we grabbed some pizza at the fairgrounds.

I swear, I have never seen such a collection

of greasy, artery clogging food stands in my life!

It makes me want to start my own business of healthy food stands.

Imagine it now, “Hey, I will meet your over at The Arugula!”

I would serve only healthy foods like salads and wraps.

Why doesn’t anyone do this?

Anyway, back to the concert…

Our seats were in the 4th row.

I always have to be close to the stage during concerts

to fully enjoy the show!

My husband knows this

and is always so sweet and gets me good seats.

Of course with the recent stage collapses at outdoor concerts,

my sister and I were a little leary of being so close!

Luckily, the night was clear and no signs of any wind gusts.

Knight Ranger opened and they rocked the stage!

We knew all the songs they played and they had a lot of energy.

Dean Castronova (the drummer from Journey)

even joined in on a song.

(Not in this picture.) 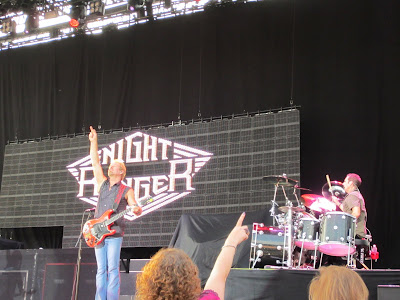 Then Foreigner hit the stage and stole the show! 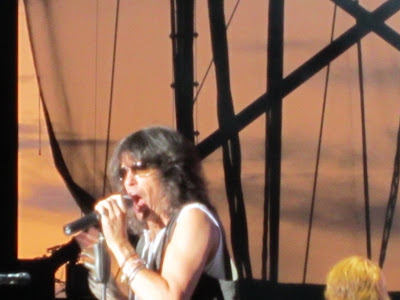 Lead Singer, Kelly Hansen blew us away with his vocals.

Mick Jones was absent due to illness but that didn’t stop Foreigner.

One of the Night Ranger guys filled in for him. 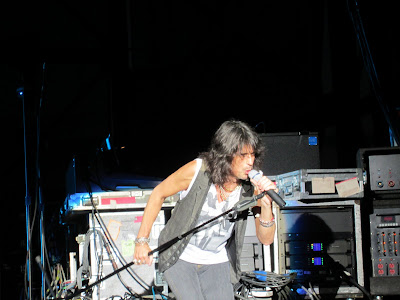 Kelly was all over the place, ran through the audience

and bounced all over the stage.

I swear I was ready for him to start “crowd surfing”! 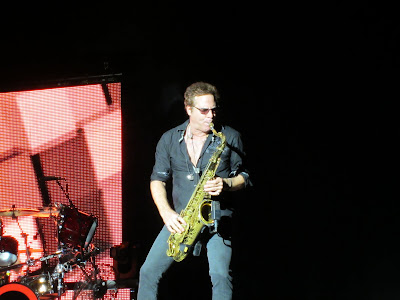 Then there was Tom Gimbel on sax!

We were in awe of this man’s talent! 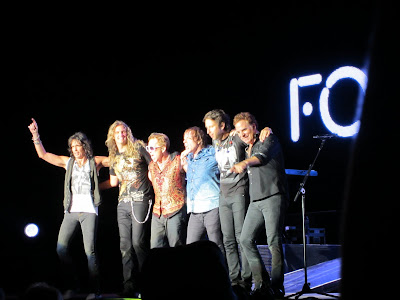 The crowd was wild!

I was already sweaty by the time they left the stage.

I think everyone forgot that Journey was still up next!

But then all of a sudden… 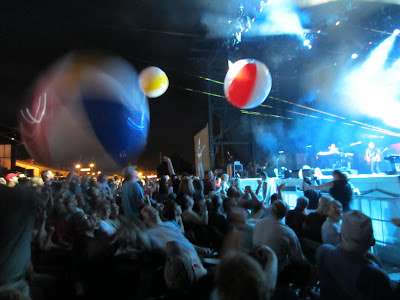 Huge beachballs appeared in the crowd.

that no one could even pay attention to Journey.

It was quite annoying

and unfortunately forshaddowed the rest of the show.

Finally, we got rid of the annoying balls,

but the concert didn’t really improve after that.

Sure, Journey played a ton of hits,

Sure, we sang along and enjoyed ourselves.

But they just didn’t have the same spark they used to have. 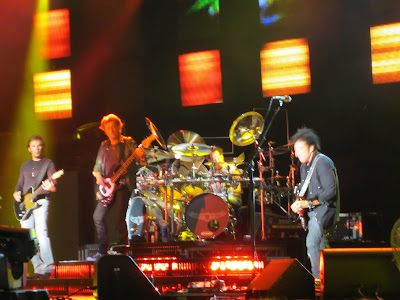 They all played like they were just there to do a job.

And everything seemed quite predictable.

I have seen them way too many times than I would like to admit.

But I don’t think that was it.

They were just “off” that night. 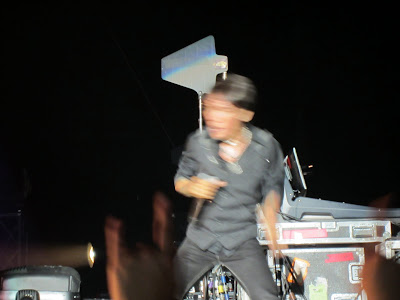 And it didn’t help that Arnel (the lead singer)

was jumping around on stage like a monkey on speed.

Sure, he had energy, but in an annoying way!

(I couldn’t even get a clear picture of him!)

Now, don’t get me wrong,

I am not one of those Journey fans who thinks Journey

is nothing without Steve Perry.

did a great job in that position.

It’s just that Arnel seemed to be trying too hard,

and the rest of the band…not enough. 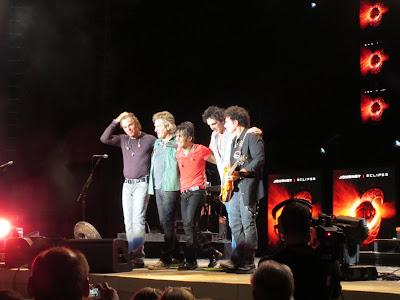 But they are still Journey. 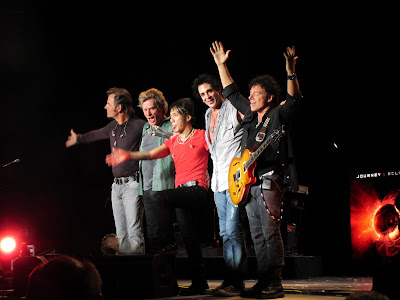 And I still love them.

Everyone is entitled to an off night.

Just don’t do it again, guys!

Did you go to any concerts this summer?

So, that wraps up my first review of the week.

Check in tomorrow to see what’s next…

Yes, I am sure you are on the edge of your seat!

I spent last Tuesday at the nail salon celebrating a friend’s birthday.  We have a tradition of taking the birthday girl out for a pedicure and we bring mimosas along to celebrate! Since we were leaving for North Carolina just two days later, I decided to also get my fingernails one. But instead of the…

Another busy week around here.  Then again, who isn’t busy?  I don’t know anyone who says, “What a slow and boring week.”  I remember a teacher in high school who used to say, “Bored people are bor-ing people!”  He used to say it so much that it stuck in my head forever and I vowed…

The Weekend Pupdate is a little late this week… While most of the country is battling the flu, (not us yet – knock on wood!). my little Rosie has been battling a stomach issue. My little sweetie hasn’t had an accident in ages, yet Sunday morning I woke up to two very messy accidents on…

Rosie Posie… Since my flowers are blooming all over the yard, I attempted to pose Rosie in front of them… I had to laugh because her head looks too big for her body here! She looks like one of those bobble-head dolls! Are we done yet? Just a couple more and you are done, Rosie……

It’s been another fun week with our little Rosie! Yes, she is still chewing everything in sight. Luckily, we have plenty of these “bully sticks” to keep her busy! She’s been getting the paper for awhile now.  I think she originally did it because she wanted to chew the bag, but since we make such a fuss over… 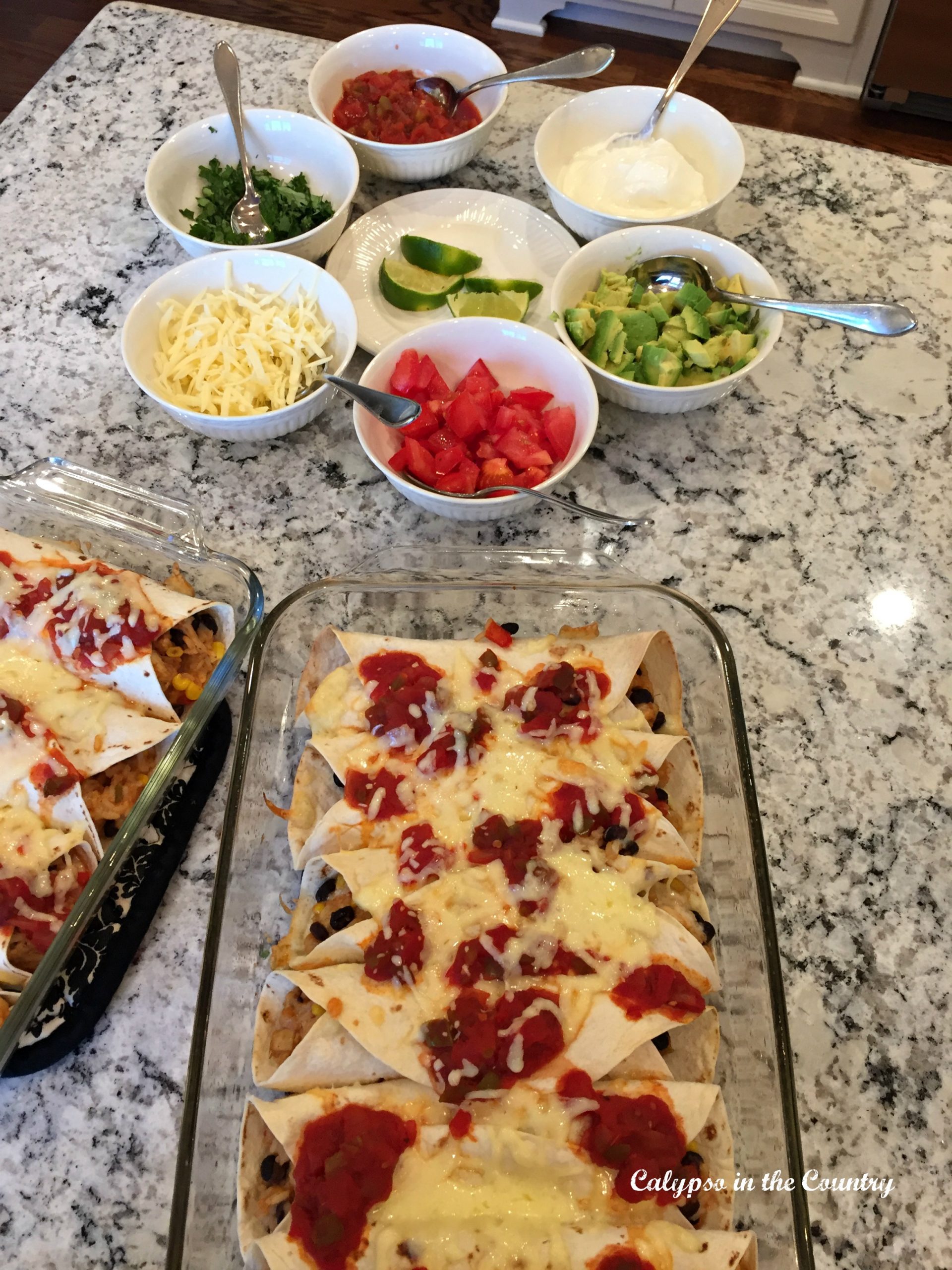 Like many of you, I get into a rut making the same recipes over and over again.  For awhile, when I told the kids I was making Mexican for dinner, that would mean basic ground chicken tacos made with the usual premixed pouch of spices…Sure, it was fine but kind of boring. Well, not anymore! …