Newport, Rhode Island in November…why not?

Sure, I would have loved to visit Newport this past summer while the Mark D. Sikes designed Coastal Living Idea House was open…but our schedules didn’t allow it.

Even though we didn’t make it up to Newport, Rhode Island this summer, we decided an off-season trip might be fun.  Each year, the kids have off from school the second Thursday and Friday in November for the annual teacher’s convention.  We find it’s a great time to take them on a mini vacation and they had never been to Newport before…

We drove up Thursday morning in beautiful, sunny weather. 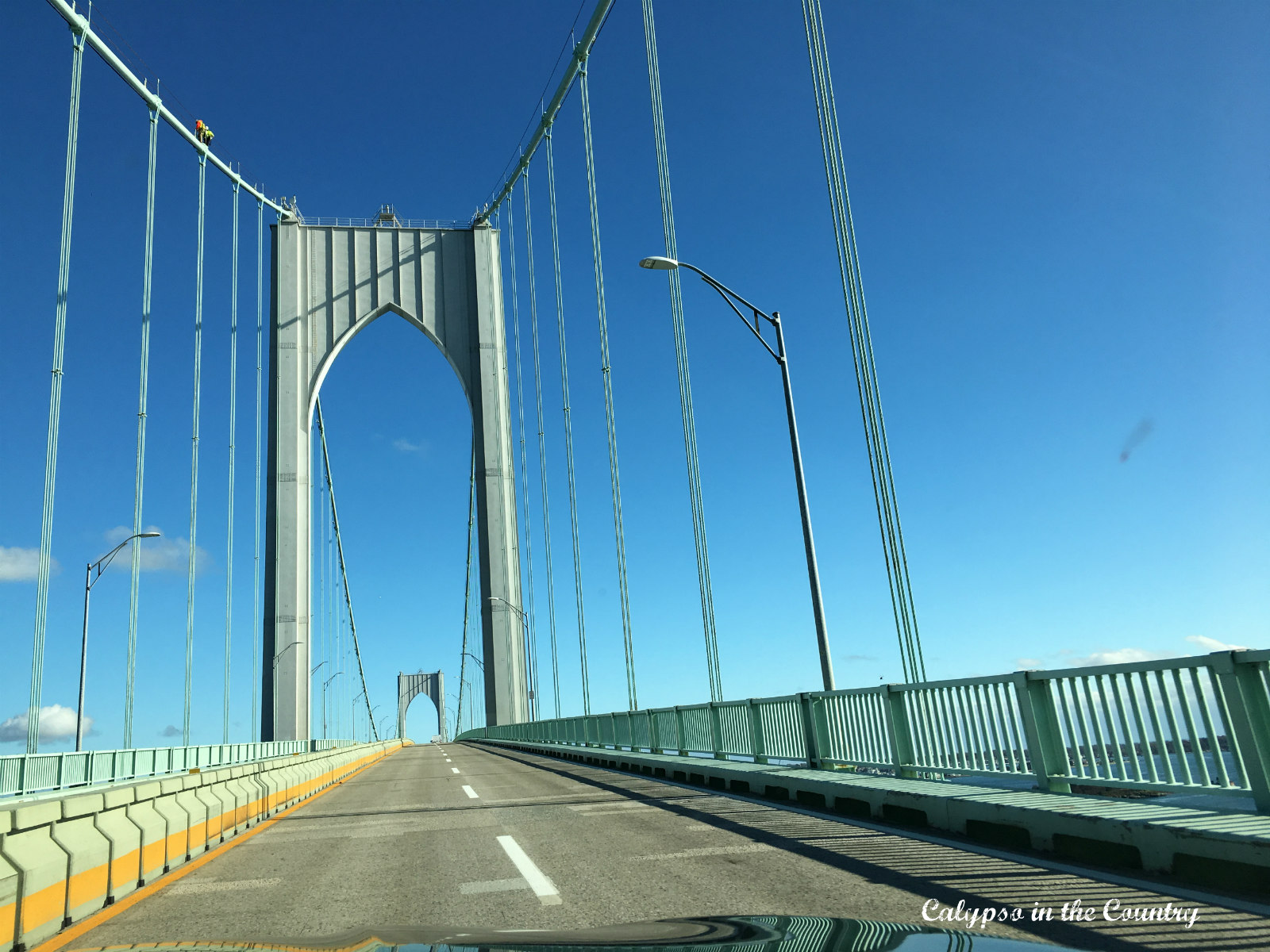 After dropping our luggage at the Marriot, we grabbed a quick lunch at Panera and headed to our first stop.  Was it a mansion tour?  No.  When you have 11 and 13 year old boys, they have other priorities… 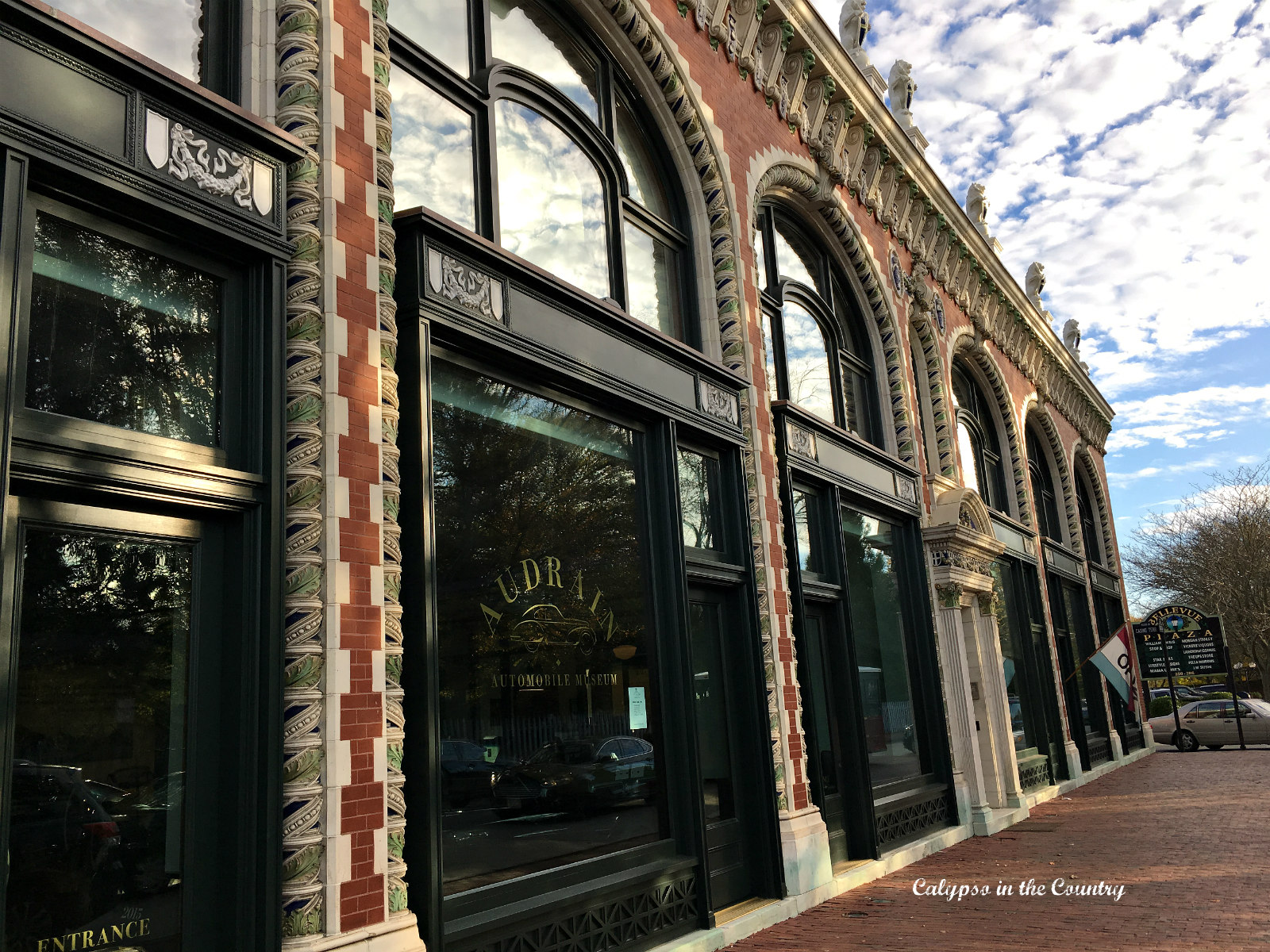 The Audrain Auto Museum was our destination.  Not the first place that comes to mind when you think of Newport, is it?  Well the boys were so excited to go.  Lately, they have been obsessed with cars and from what we read on the internet, this place displays quite a collection.  Apparently, they change their displays every few months and currently they are showing the Grand Touring Cars.  (Did you know that’s what “GT” stands for?  I didn’t). 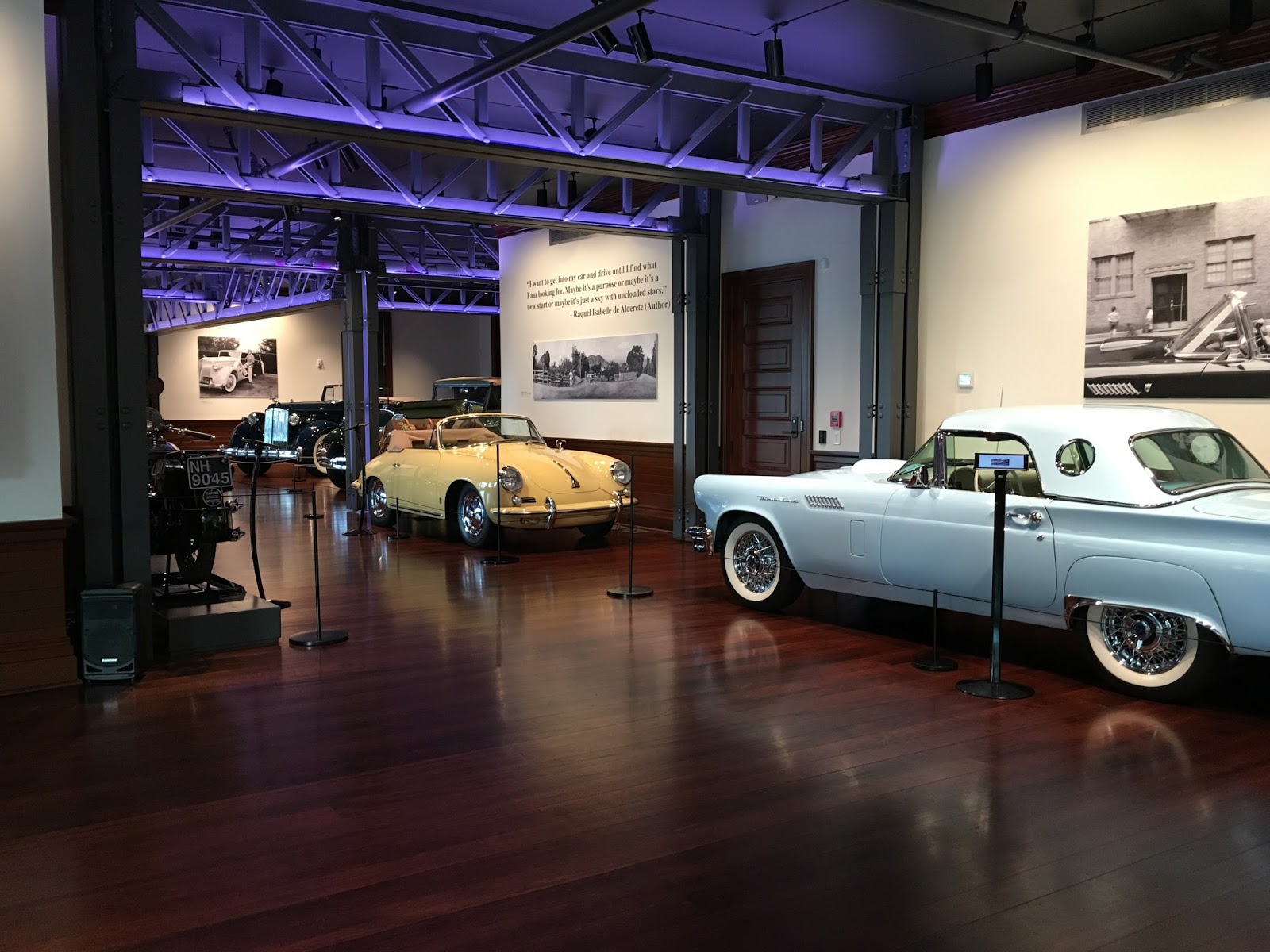 Well, I would be lying if I said the boys weren’t just a little disappointed.  Although the collection of cars was exquisite, they were expecting to see more Bugattis and Lamborghinis…the fast, super expensive type of cars that most boys dream about.  The museum had just rotated the displays a few weeks prior and when the man at the front desk went through the list of all the cars we “just missed”, I could see the deflated looks in the boys’ eyes.  So, they made the best of things and enjoyed what was on the floor. 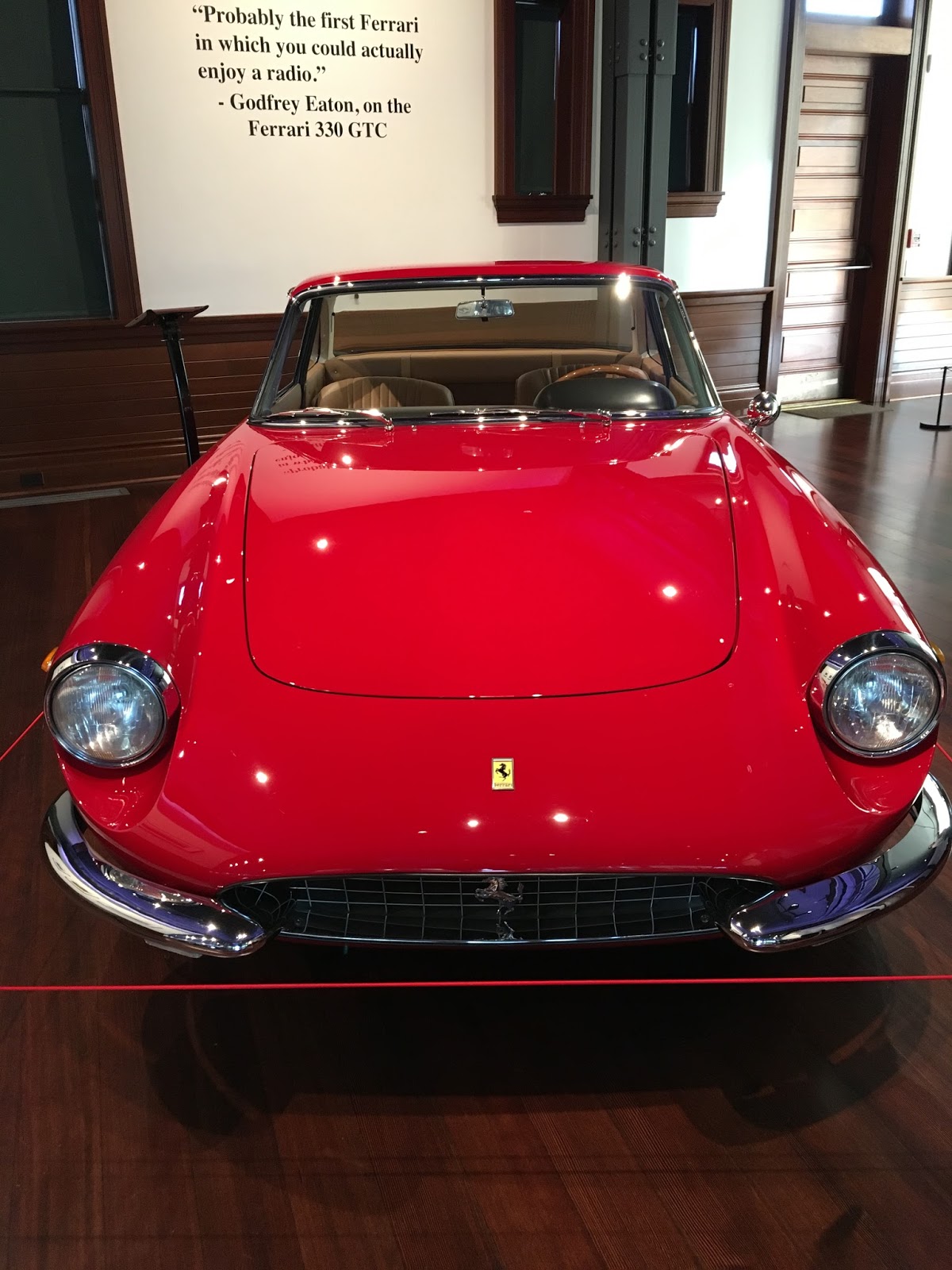 Which wasn’t too bad as far as I could see! 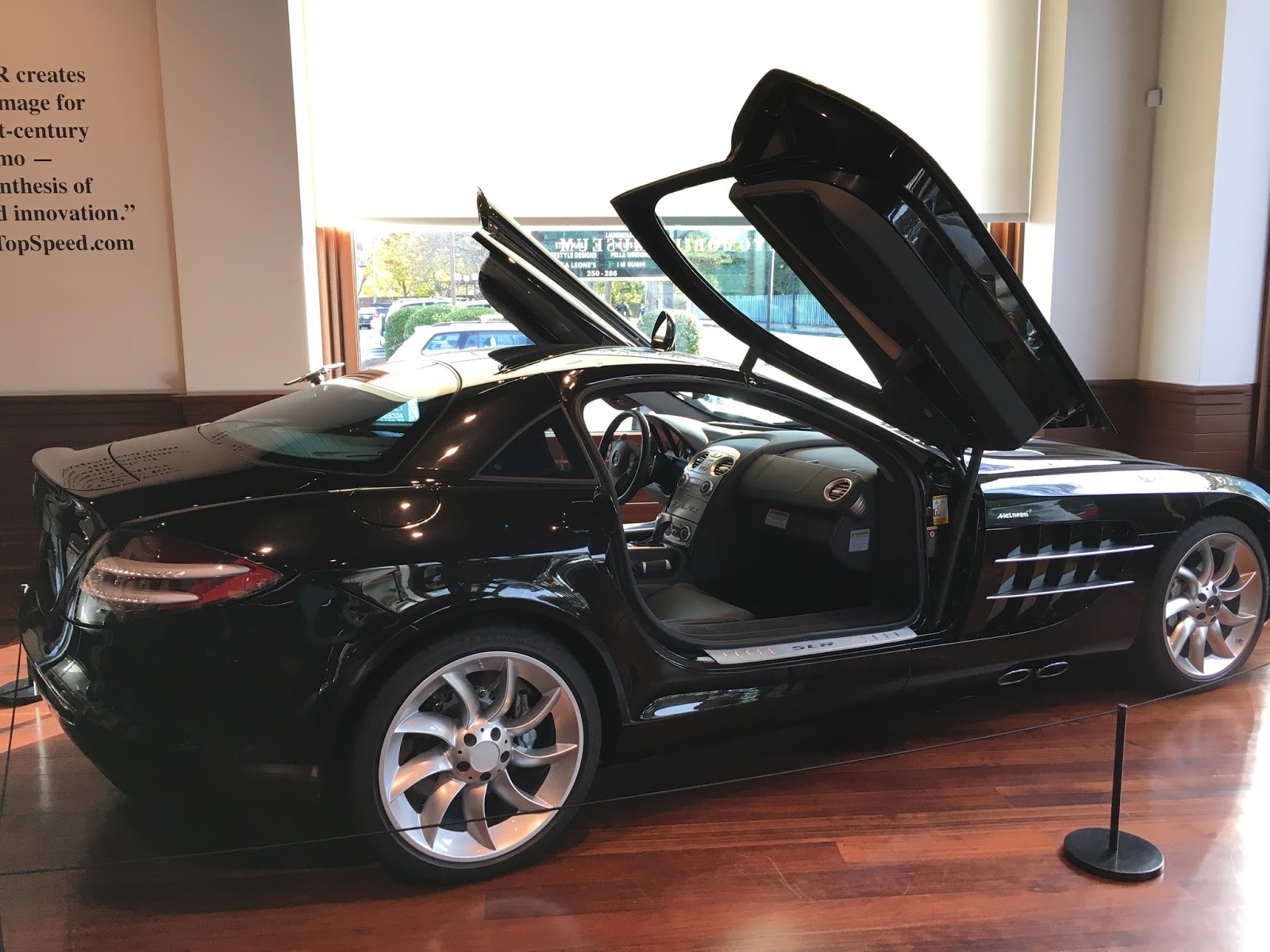 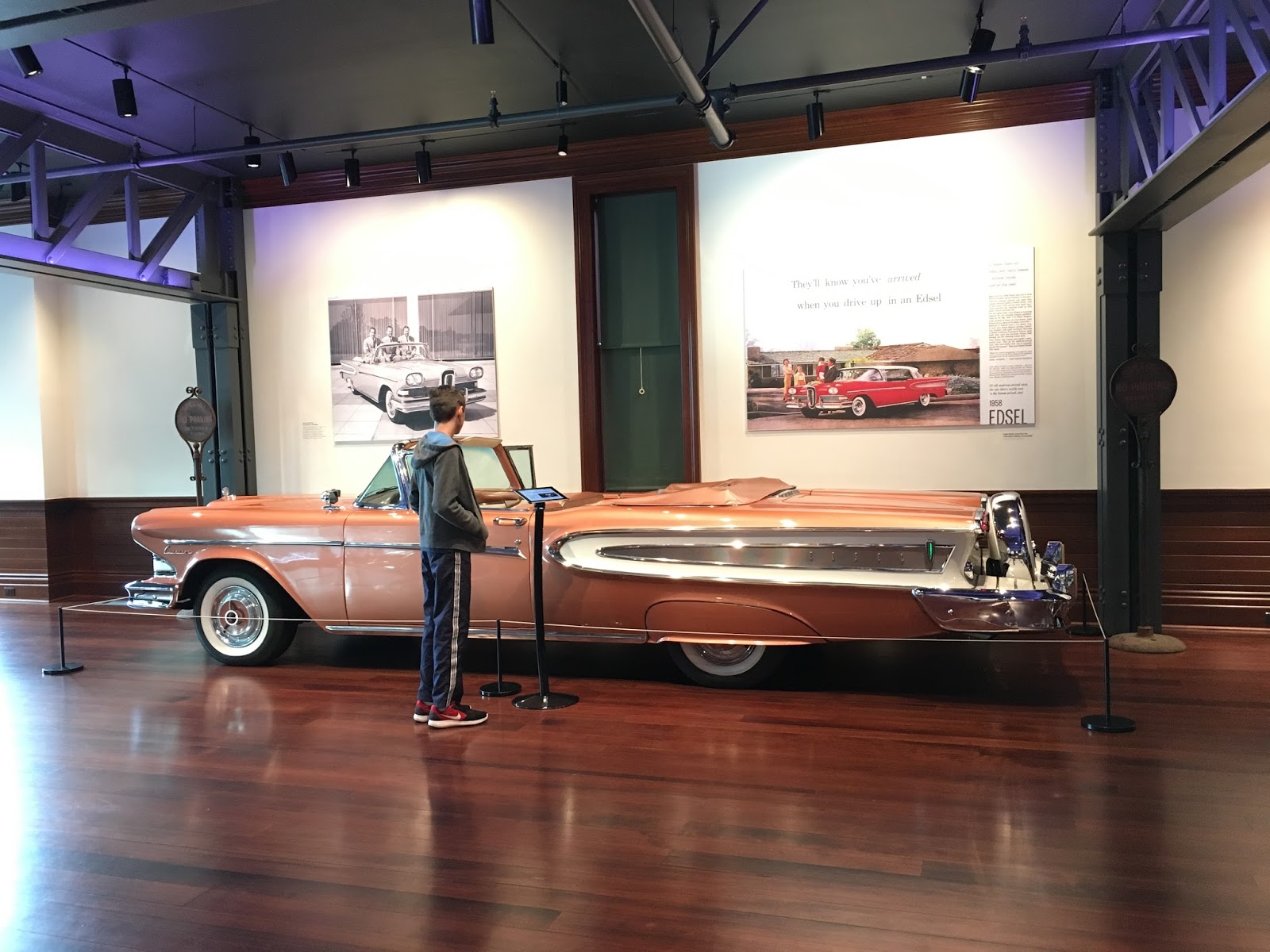 We don’t get to see these everyday! 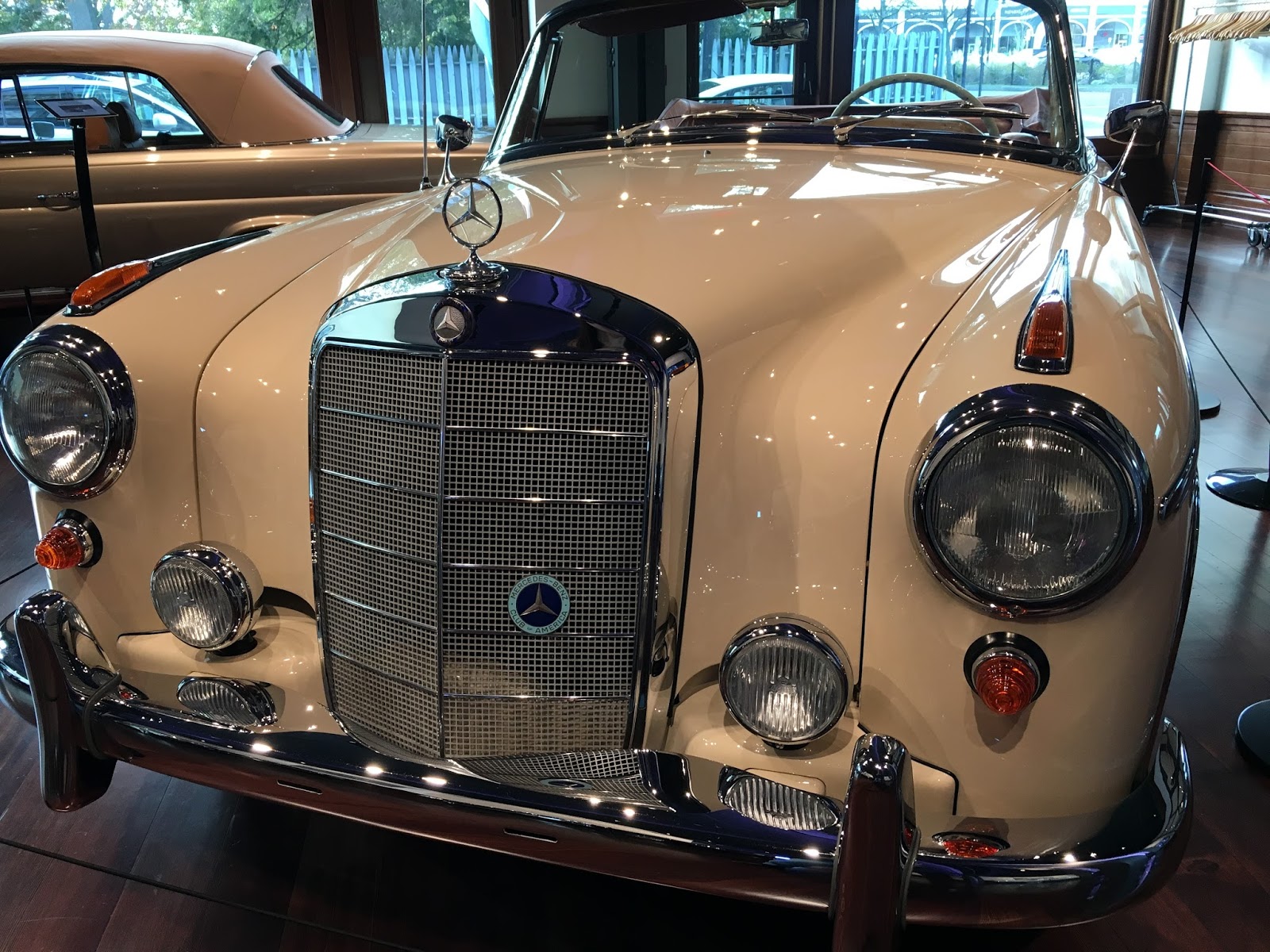 Overall, we all enjoyed the visit and appreciated the stories the guide told us.  The kids ended up having a great time even though they didn’t see the cars they expected.

From there, we drove around town and through the streets where the mansions are located.  We tried to find a spot to park so we could walk some of the famous Cliff Walk.  The Cliff Walk is one of the “must do” activities when you travel to Newport and we…didn’t do it!  (Wow, what an exciting trip report this is becoming…).  The sun was beginning to set and we weren’t in the area where the walkway began.  Plus, the walk is around 3 1/2 miles and we decided it was too late in the day so we drove down Ocean Drive and stopped at the iconic Castle Hill Inn instead. 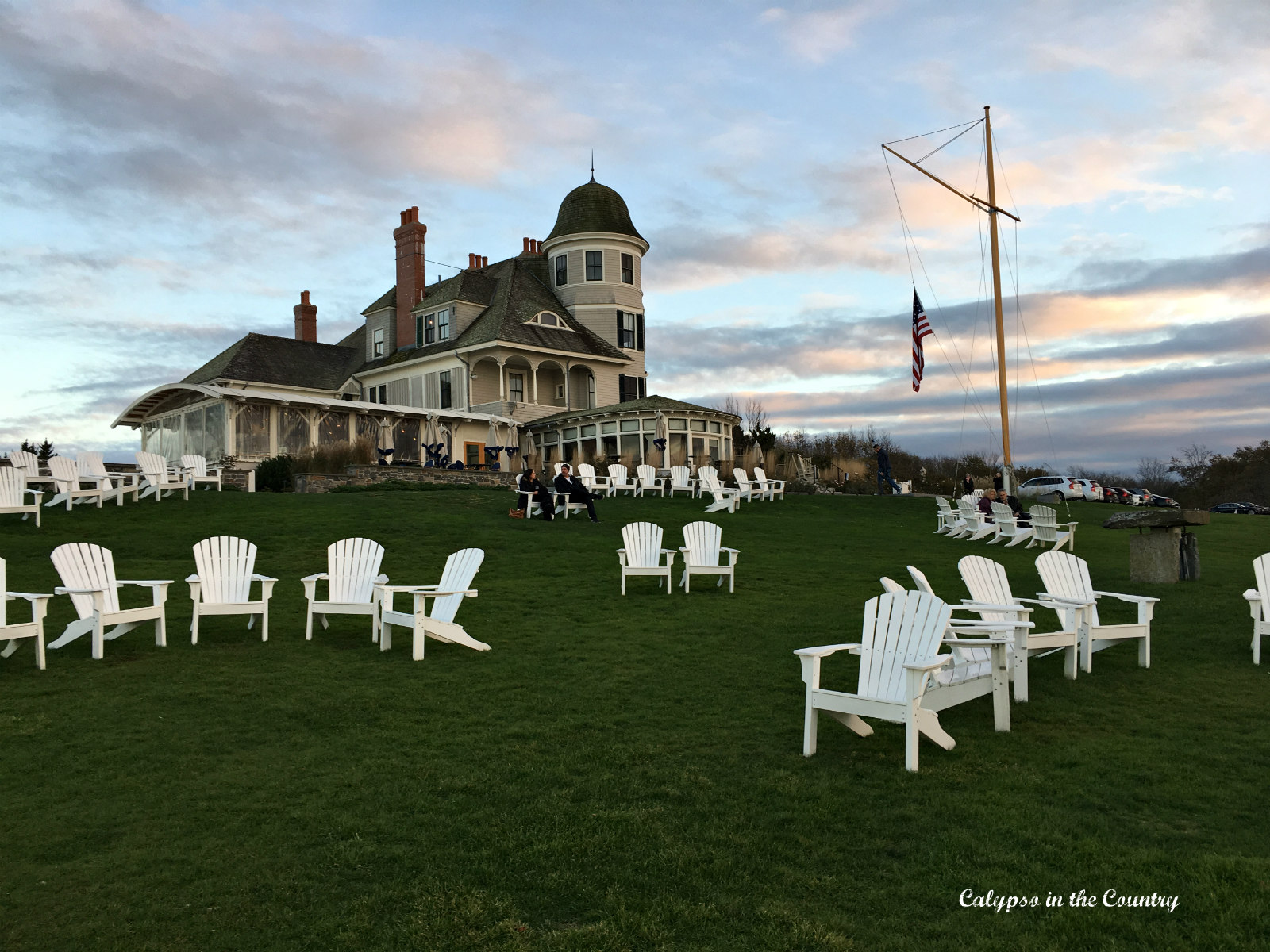 After all, this is THE place to watch a sunset!  On a warm summer day, this lawn is filled with guests socializing and drinking cocktails.  We pretty much had the place to ourselves so we hung out and enjoyed the scenery. 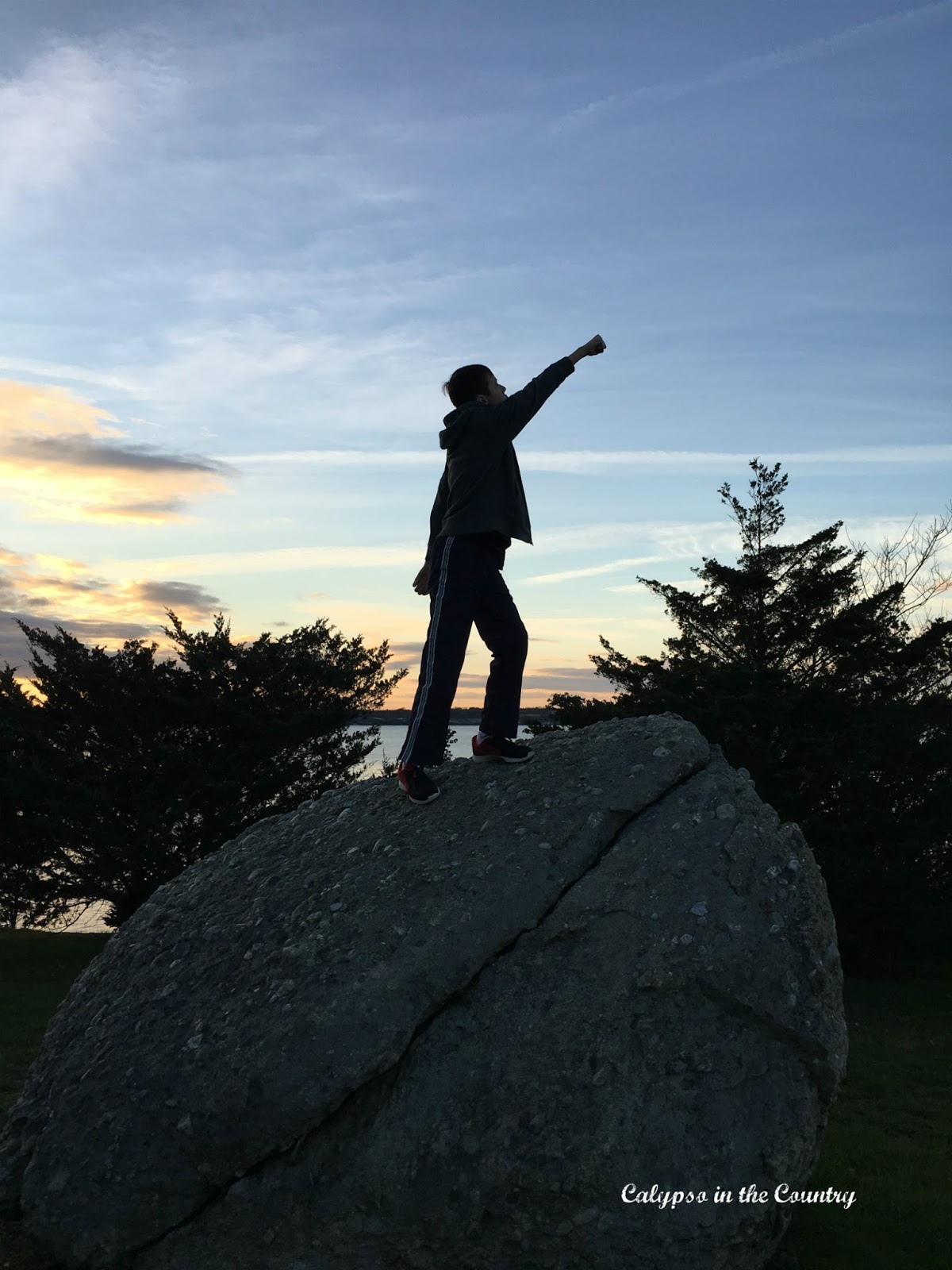 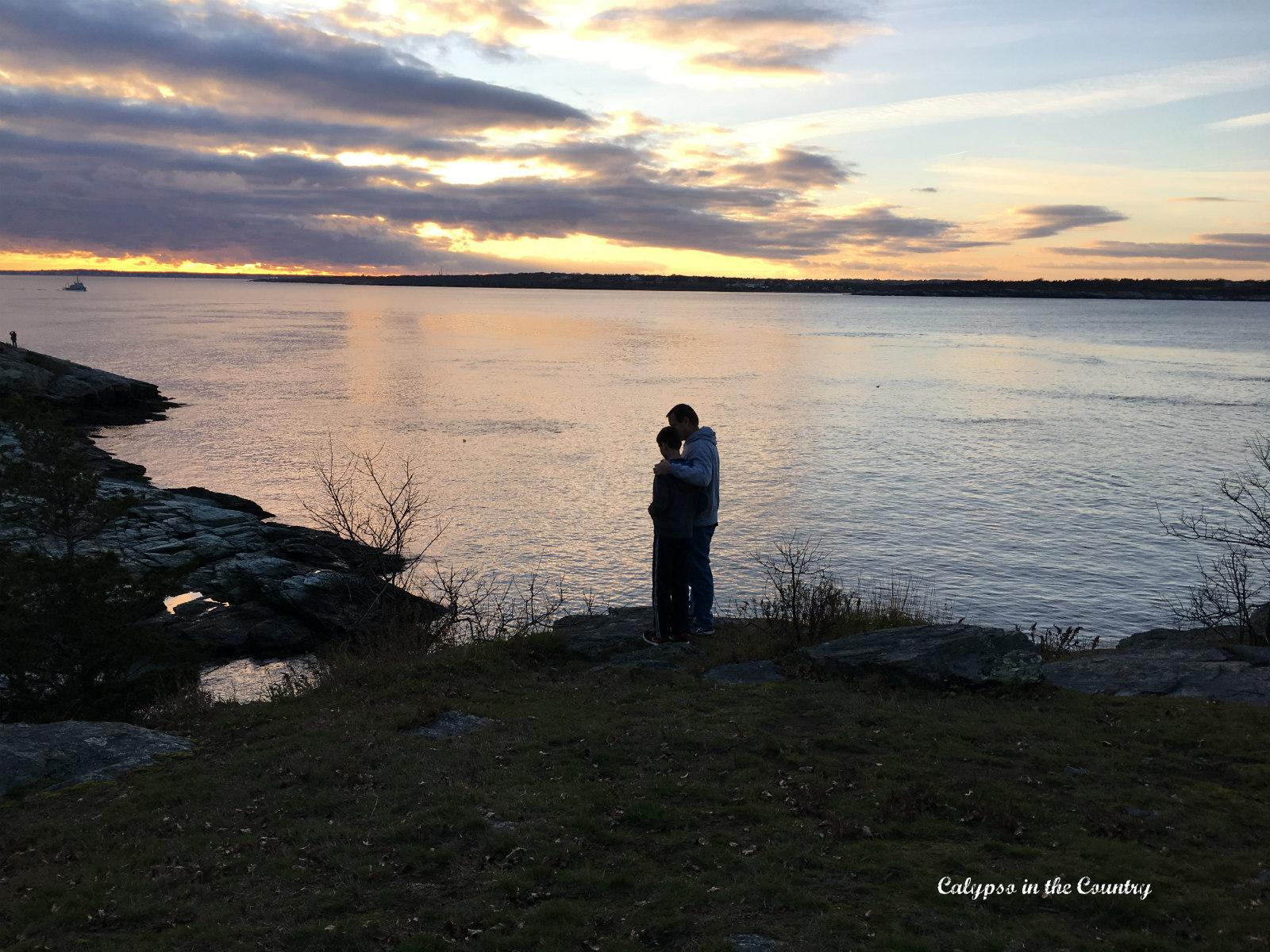 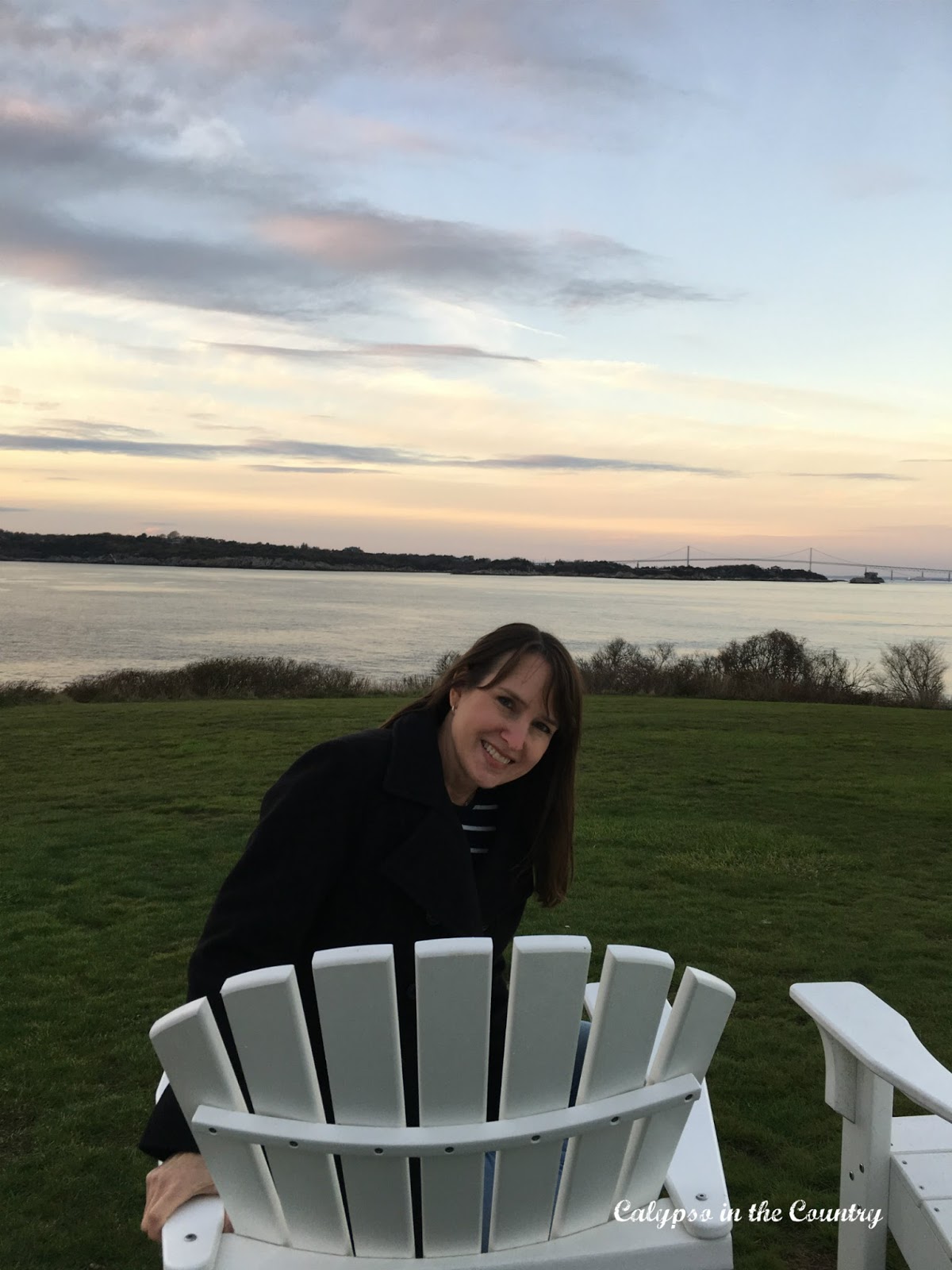 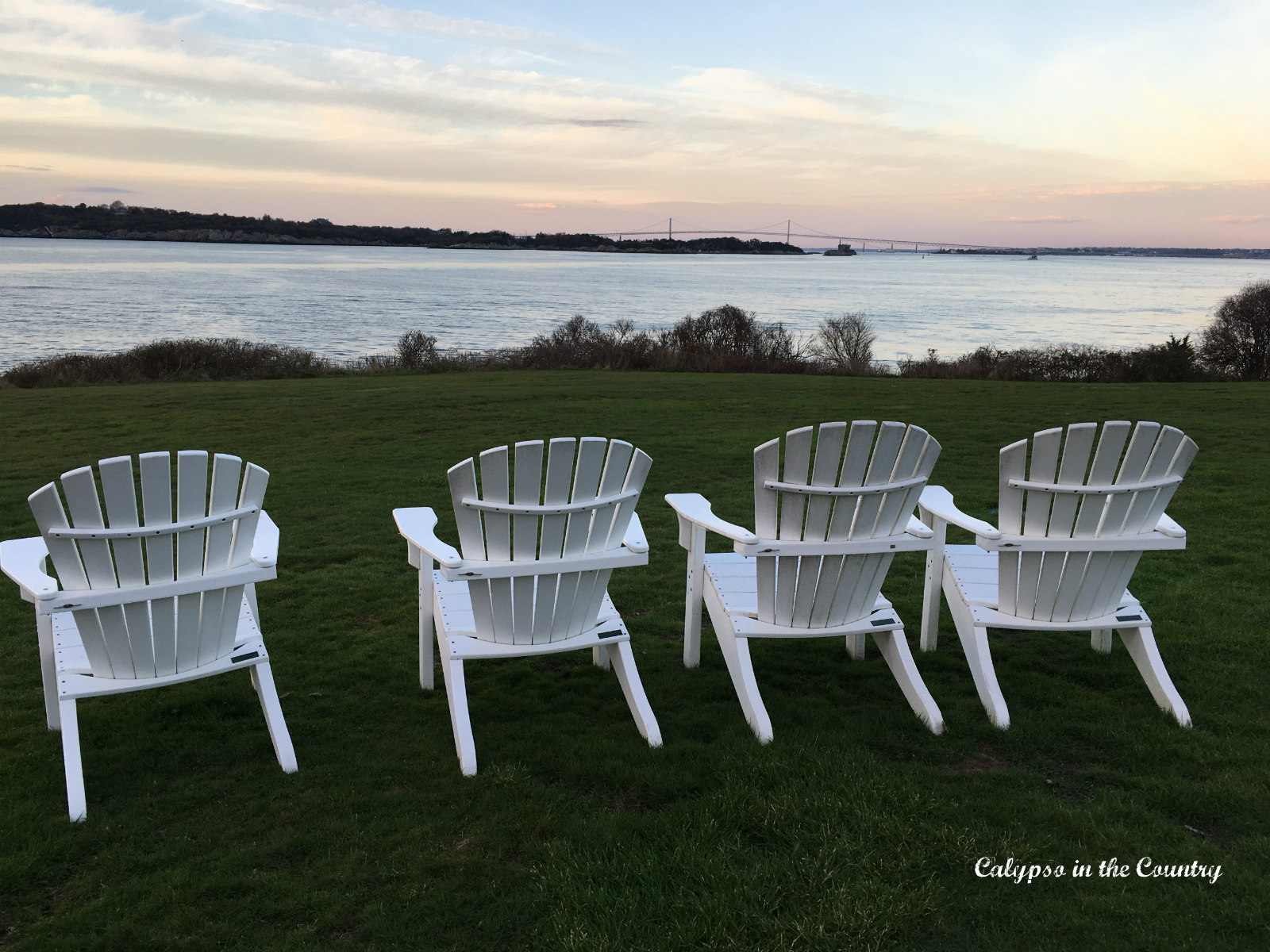 That’s the Newport Bridge off in the distance. 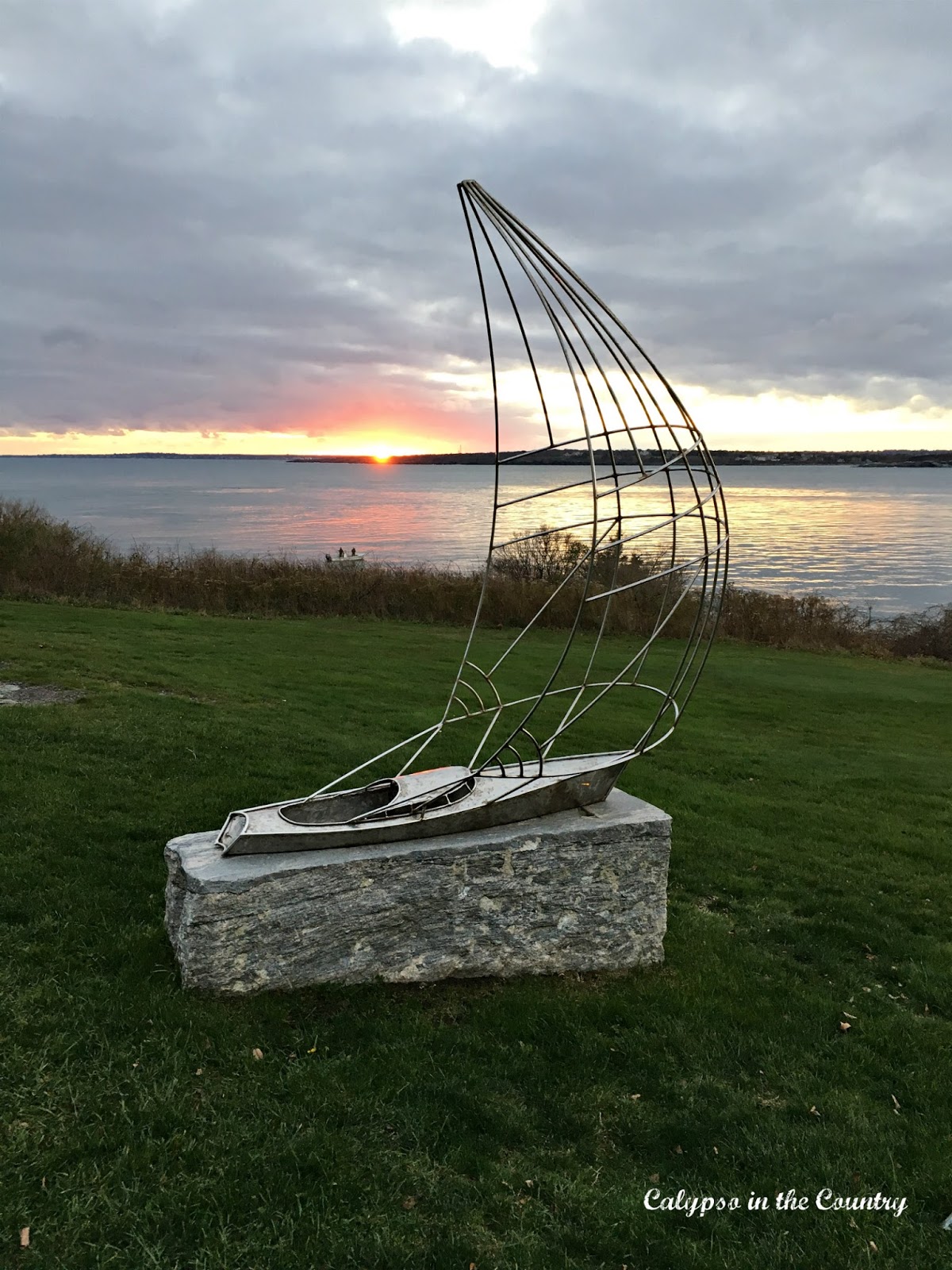 The perfect place to be at sunset!

Afterwards, we drove back to the hotel, had “family work-out time” in the gym.  Being such a beautiful night, we walked to dinner at one of my favorite restaurants, Clarke Cooke House. 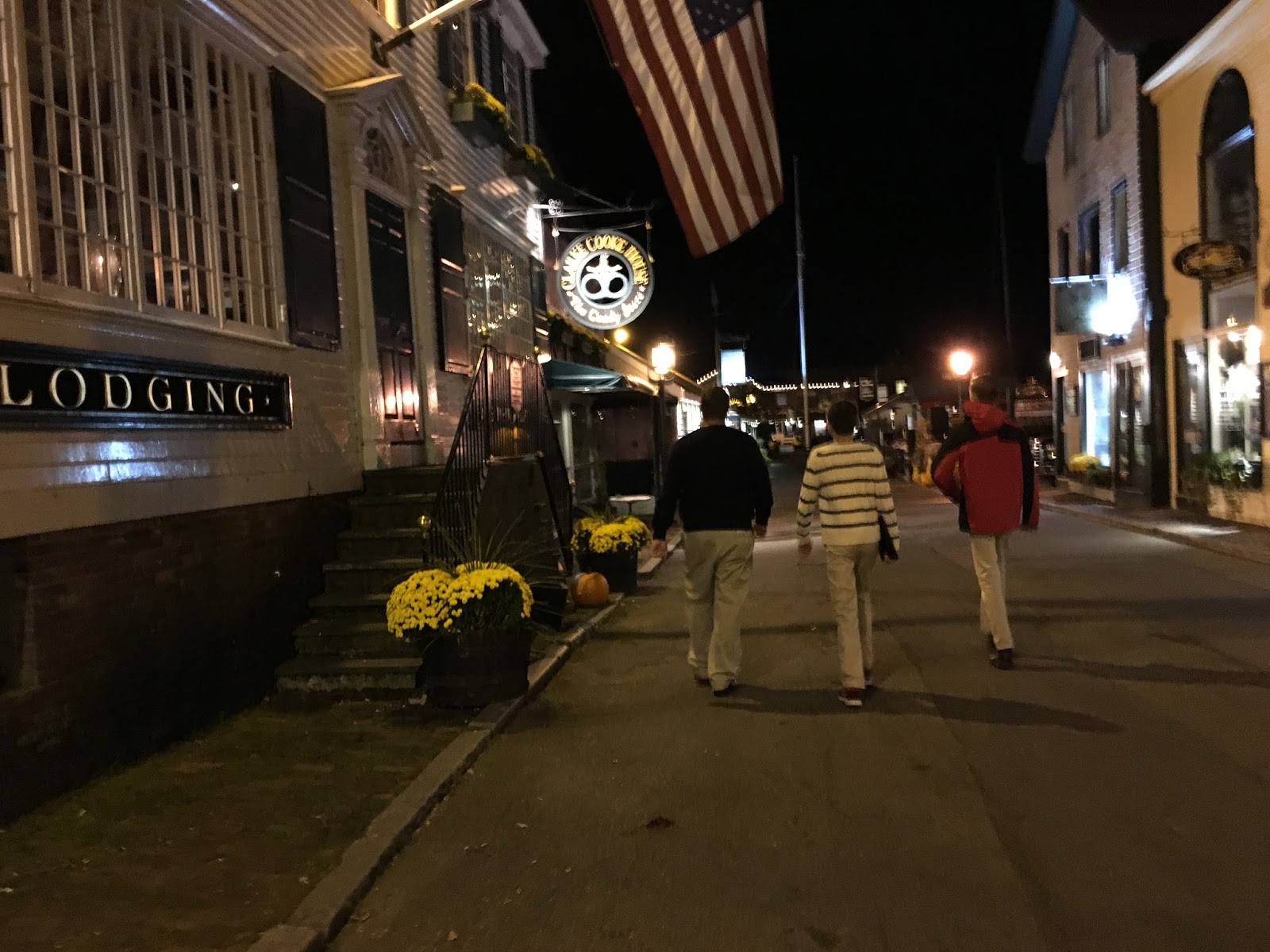 We happened to be in Newport during “Restaurant Week” so we made sure we had reservations everywhere.  The town wasn’t crowded like in the summer but there were definitely more people than I would have expected for a seaside New England town in November!

We enjoyed some New England Clam Chowder and a delicious dinner all while seated in the bar room where we had the tiniest table for 4 that I have ever seen!  It would have been small for 2 people…but we just laughed and made due! 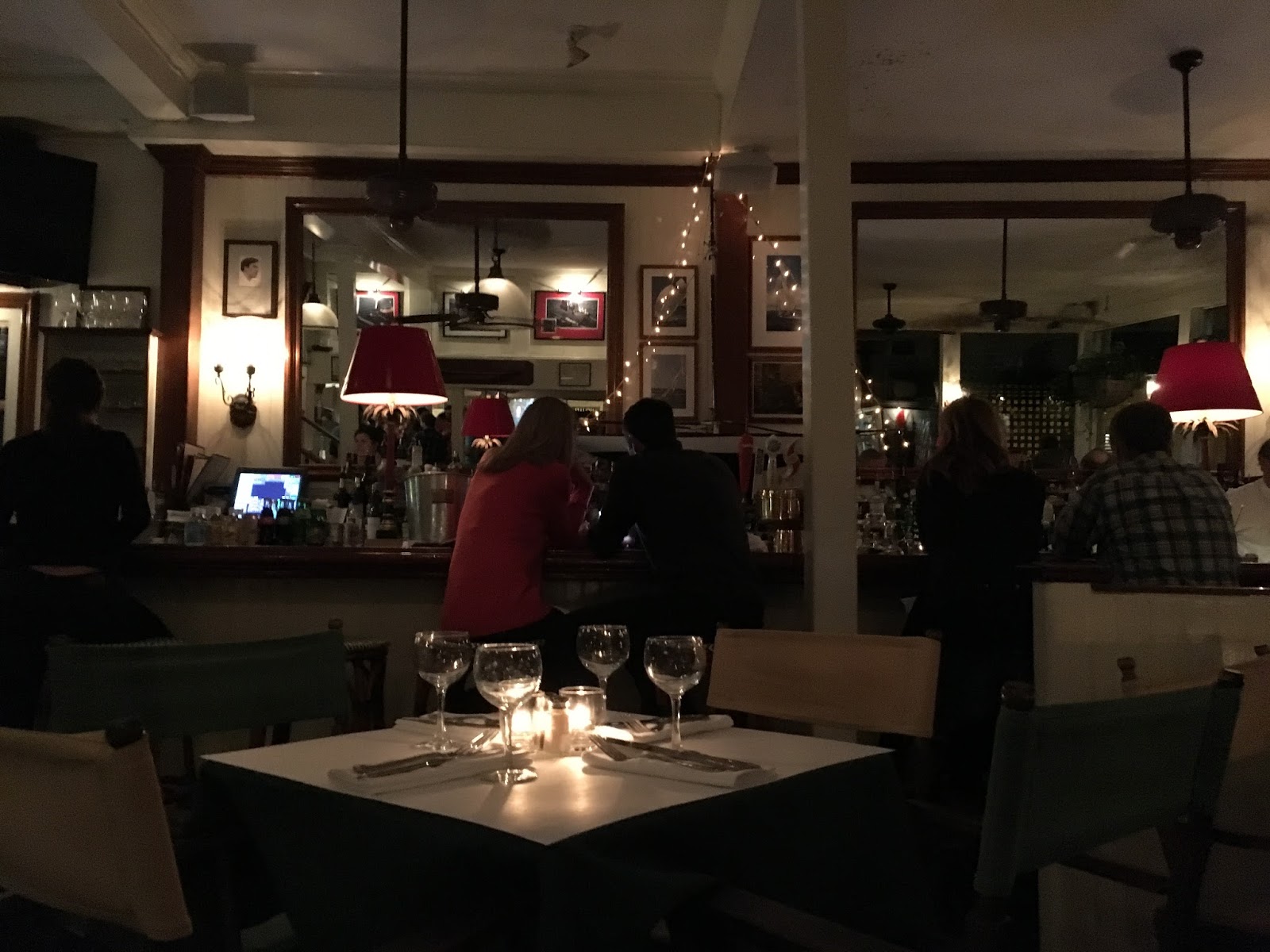 (This was the table next to ours and you really can’t appreciate the size of the table in this photo).

We were up bright and early the next morning because a couple mansion tours were on the agenda!  After all, family vacations have to include everyone’s interests!  Actually, I toured the mansions many years ago but I thought it would be good for the boys (and my husband) to learn a little about the history of Newport.

We just bought a 2-House ticket.  I didn’t want to overwhelm them with too much opulence in one day.  Plus, we had other plans for after lunch.  The first house (or cottage as they were called) was the famous, Breakers. 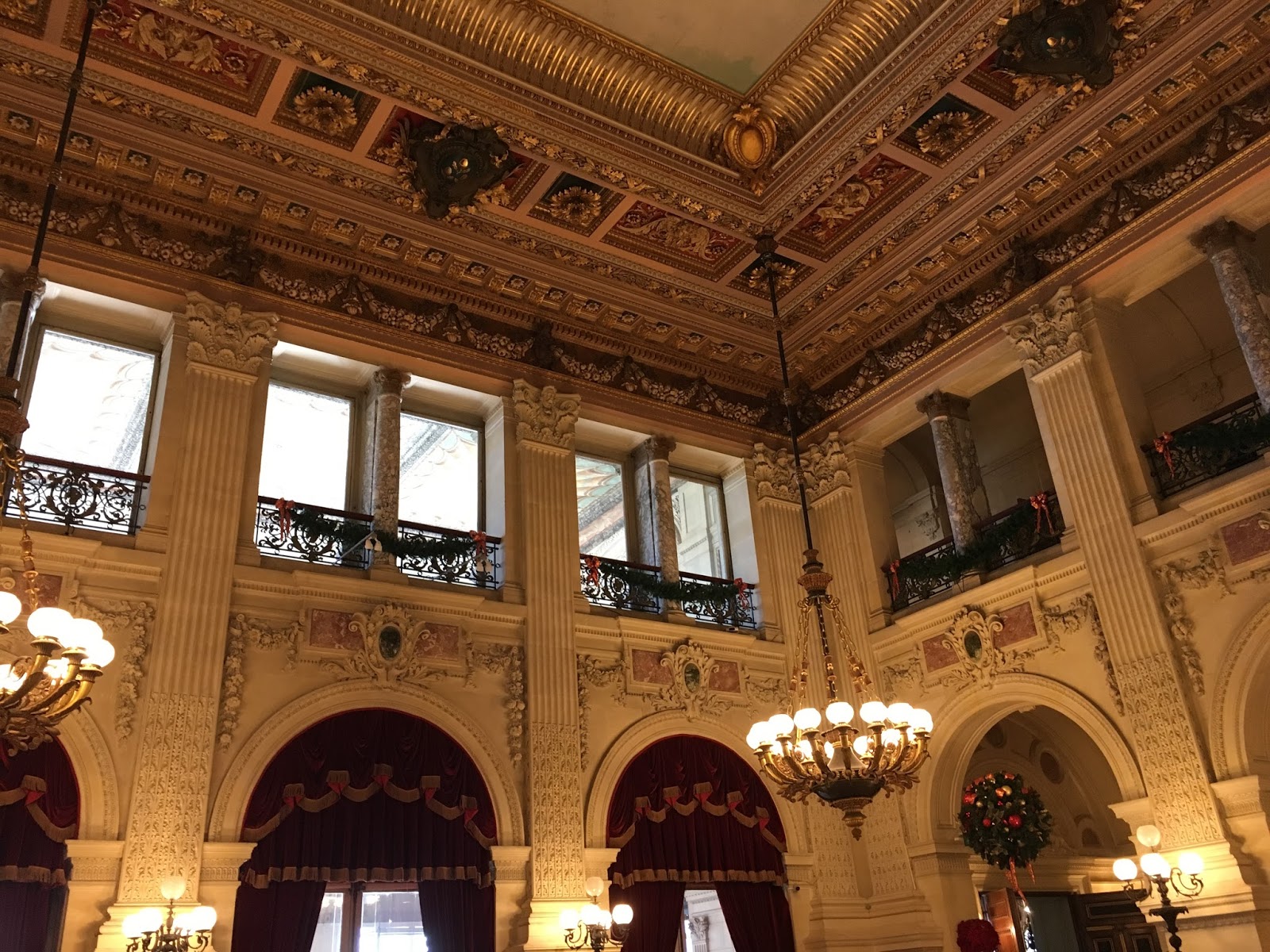 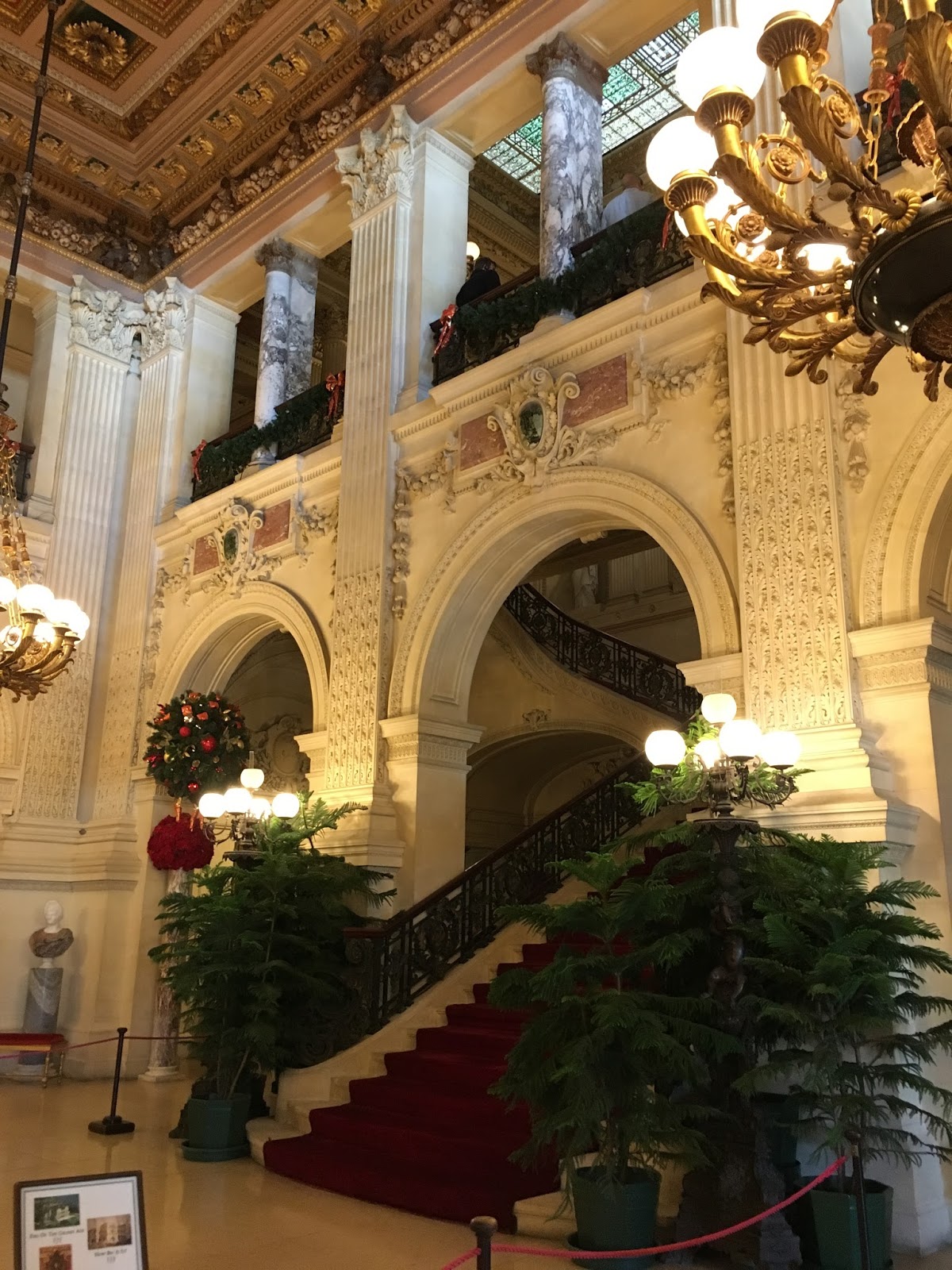 We made sure we listened to the headset audio tour to learn as much as we could about the fascinating Vanderbilt family.  It was so cute how when entering each room my younger son would push my play button at the same time as his so we could be in sync with each other.  When the recording said something surprising or really interesting, we would look at each other with wide open eyes.  I think he really enjoyed it.  Actually, we all did. 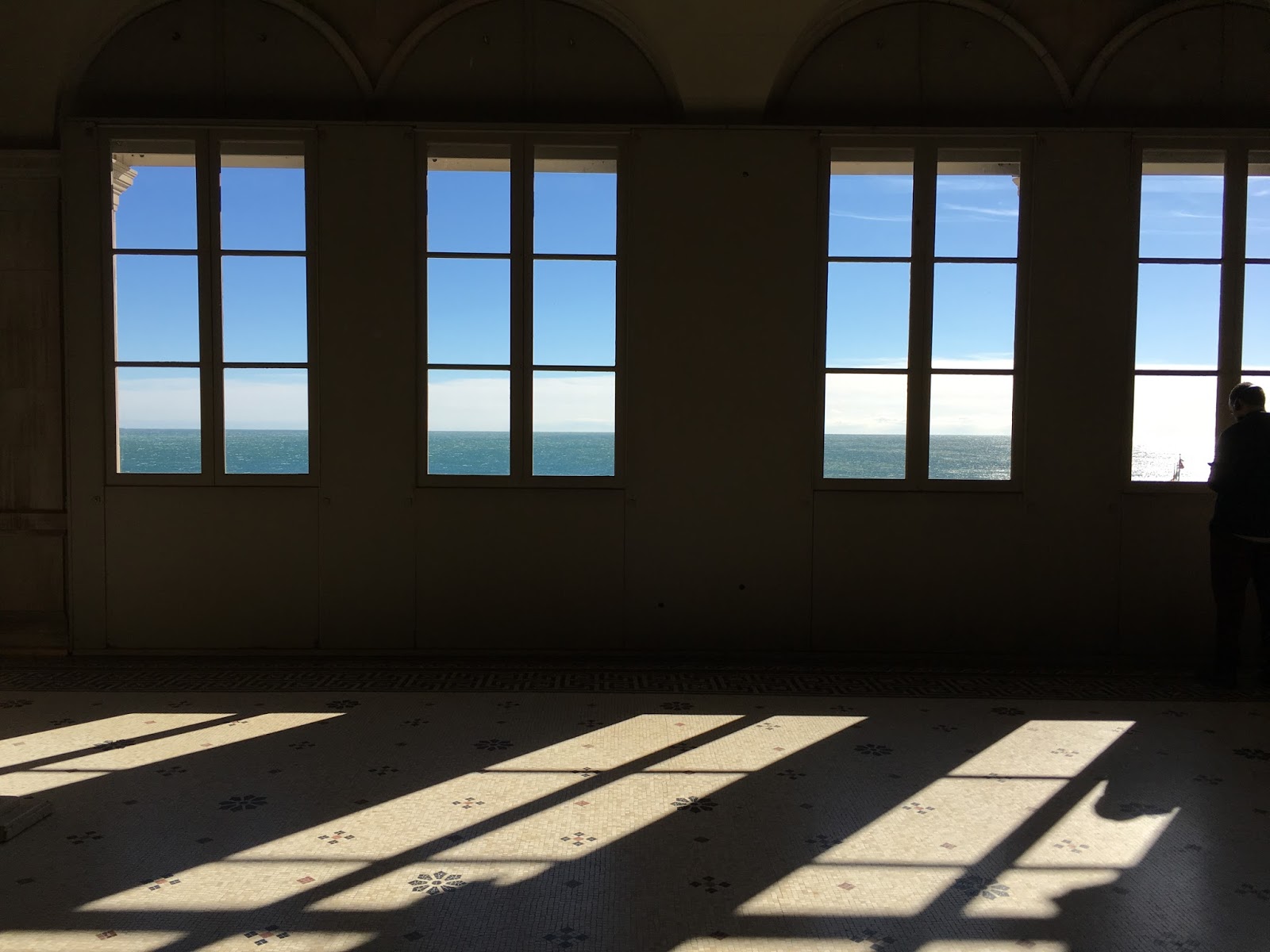 As you can see by the view out the windows, the ocean is right there.  AND if we had been able to walk the Cliff Walk, we would have had some amazing views of the mansions from that angle. 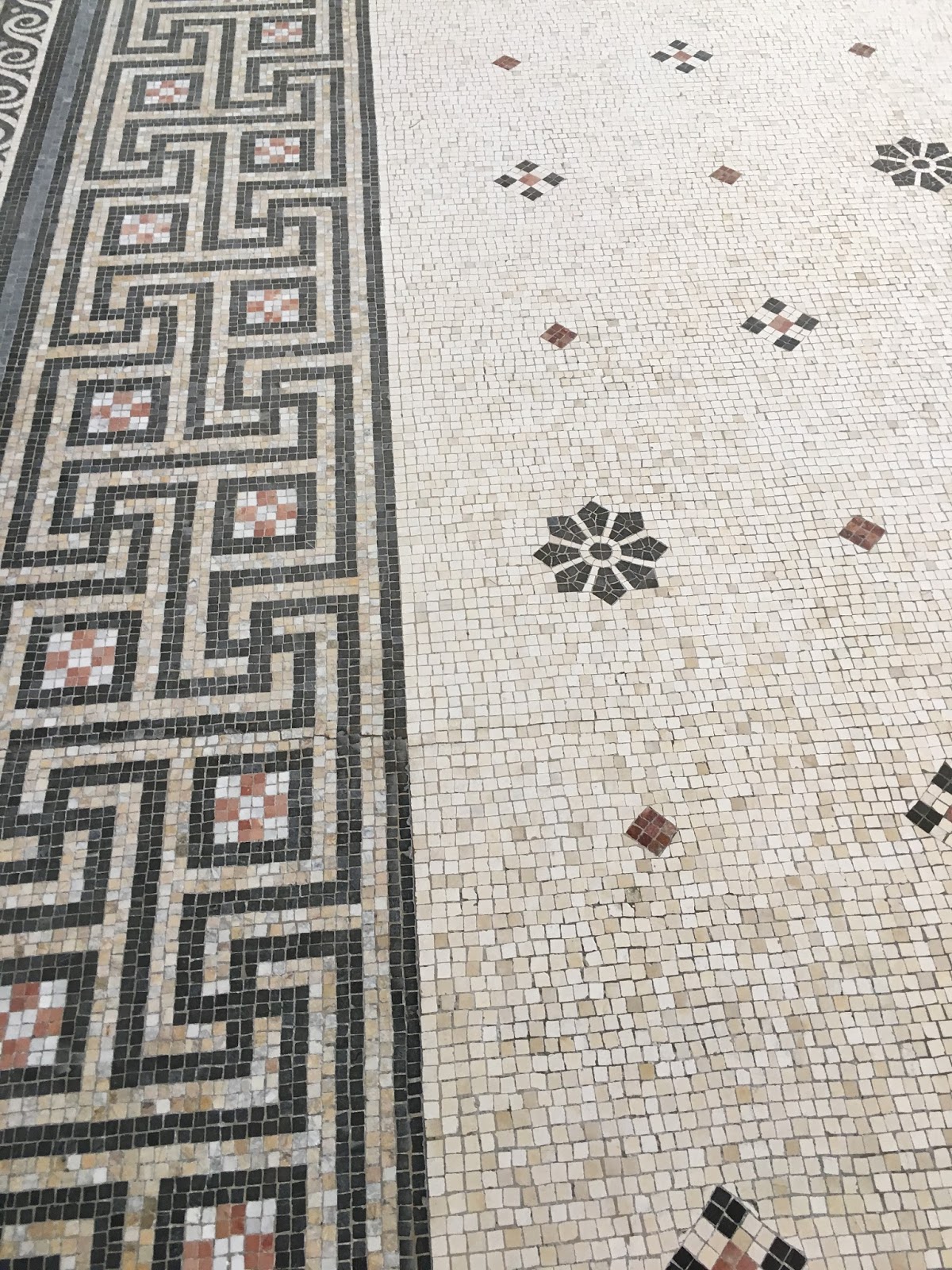 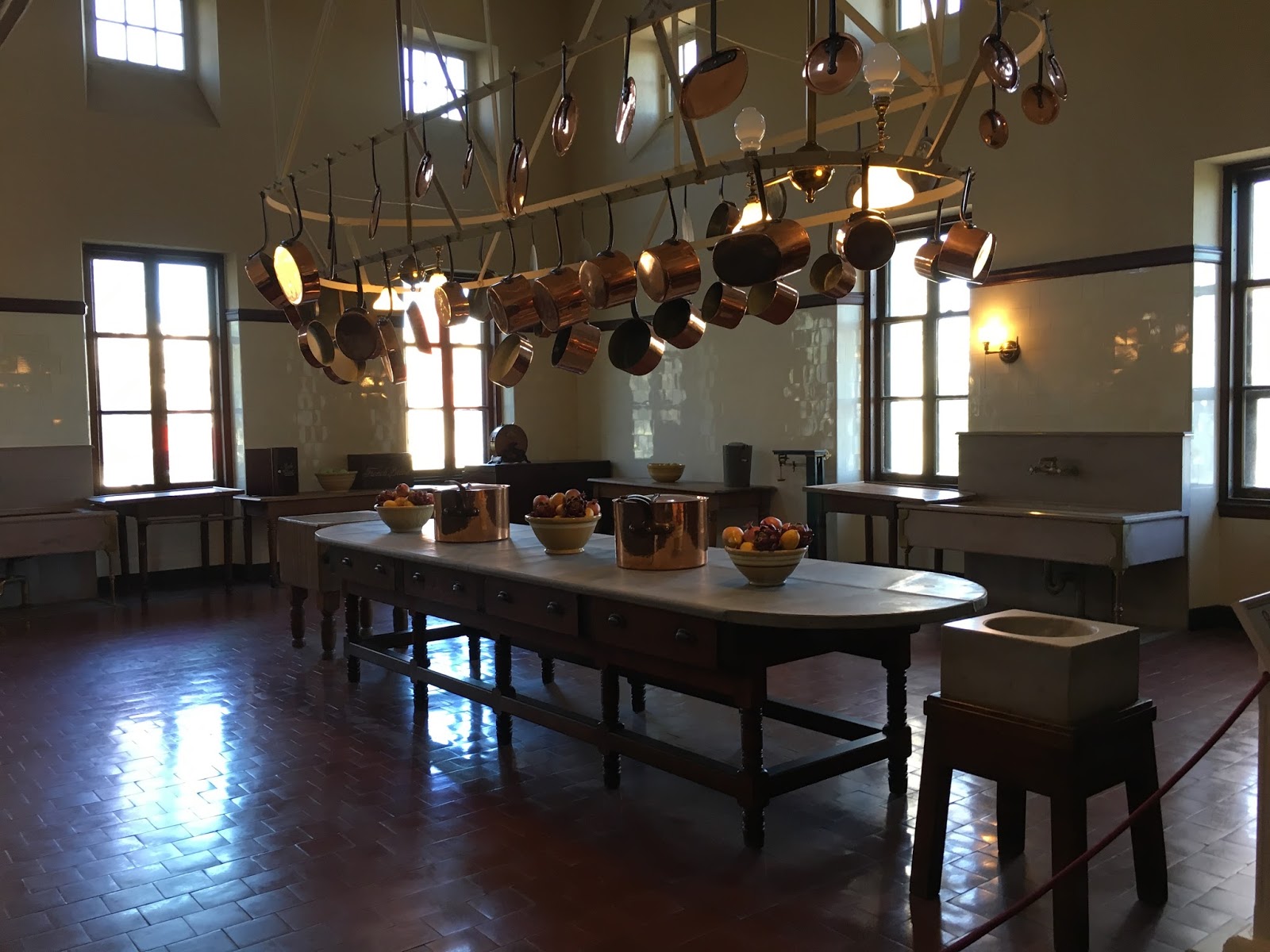 Quite a kitchen for its time, huh?

Next we were off to Marble House.  You can actually walk from mansion to mansion but that day it was absolutely freezing and windy so we opted to drive.  Parking was just across the street. 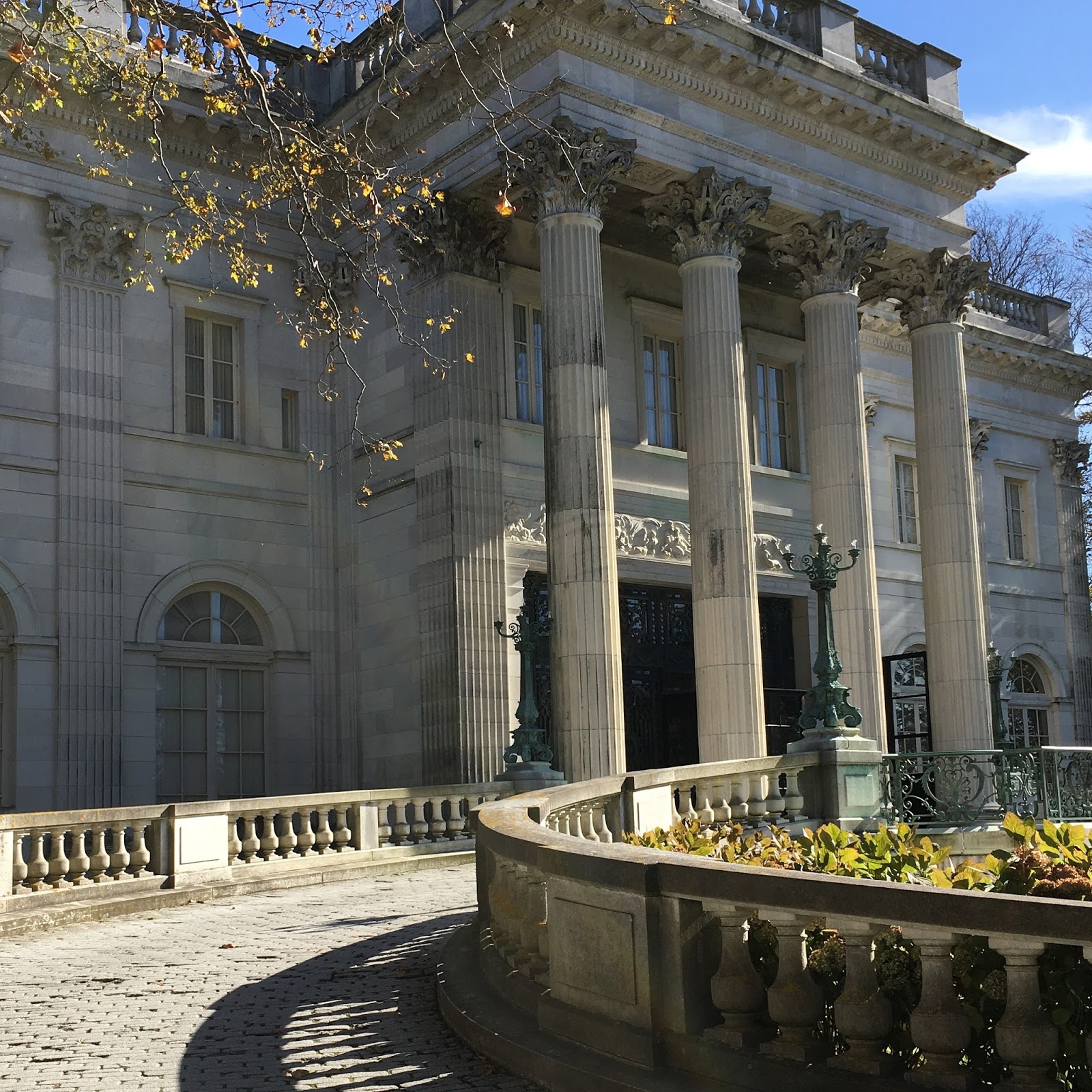 Another tour with more interesting Vanderbilt stories.  This house was actually a gift from William K. Vanderbilt to his wife, Alva for her 39th birthday!  Gee, I don’t remember receiving any gifts like that for my birthday… 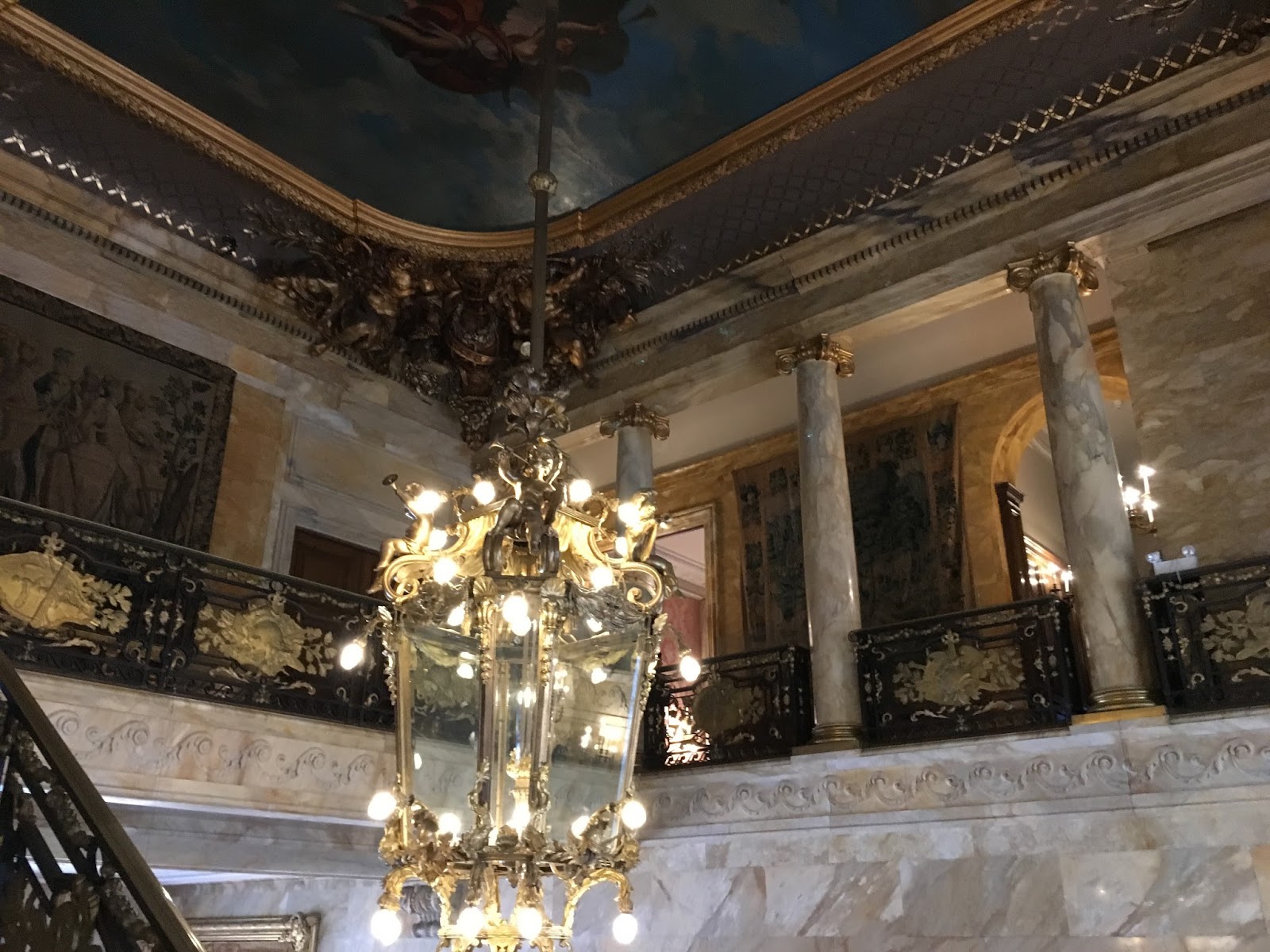 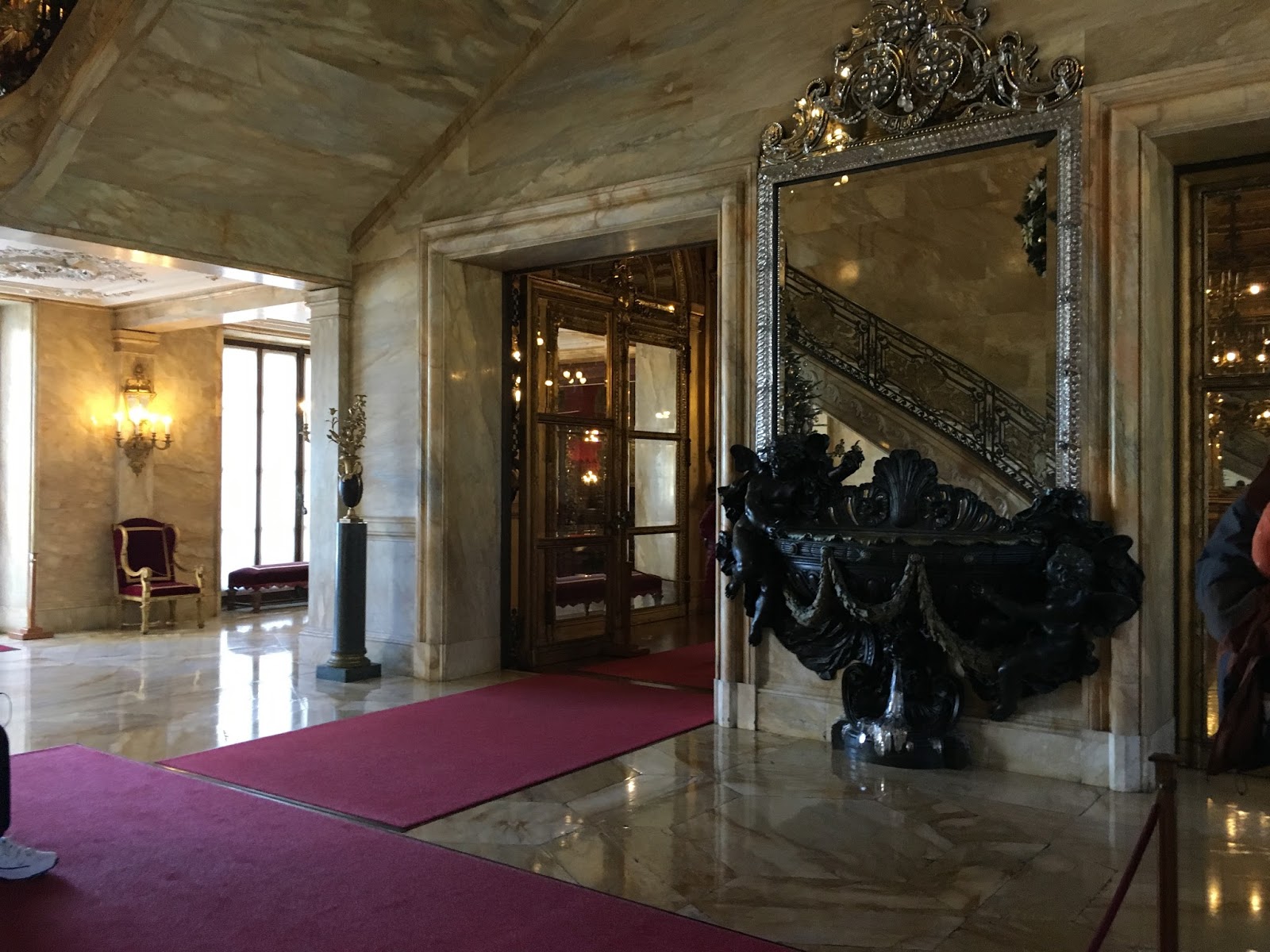 Two mansions were just enough for the boys, so we refueled with some lunch at the Mooring Restaurant and hopped back in the car for a 10 minute drive to Portsmouth, RI.

Because just one car museum is not enough for one trip…

Yes, this time we visited the Newport Car Museum which had even more cars on display than the museum the day before. 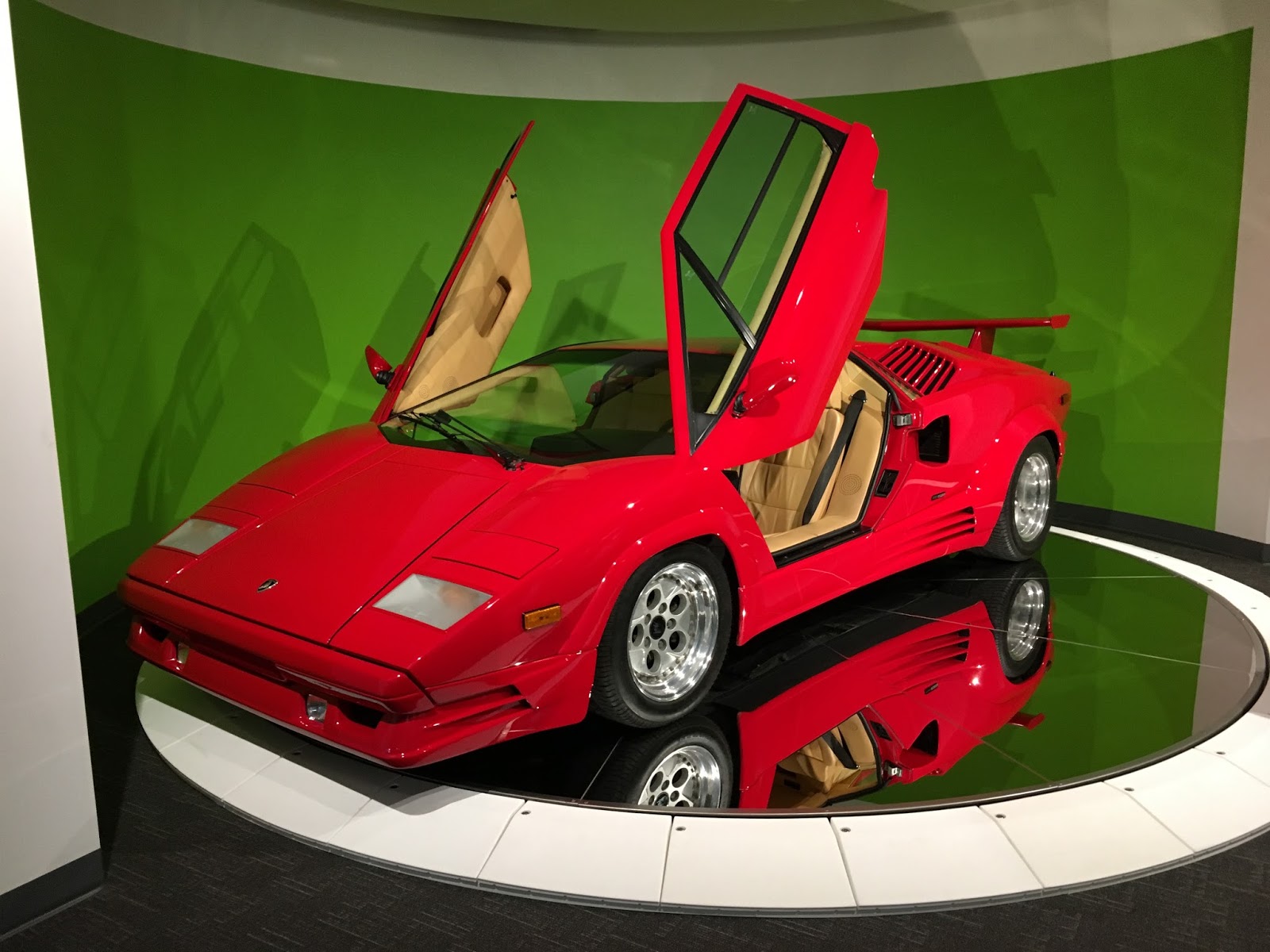 And even more sports cars like the kids wanted to see! 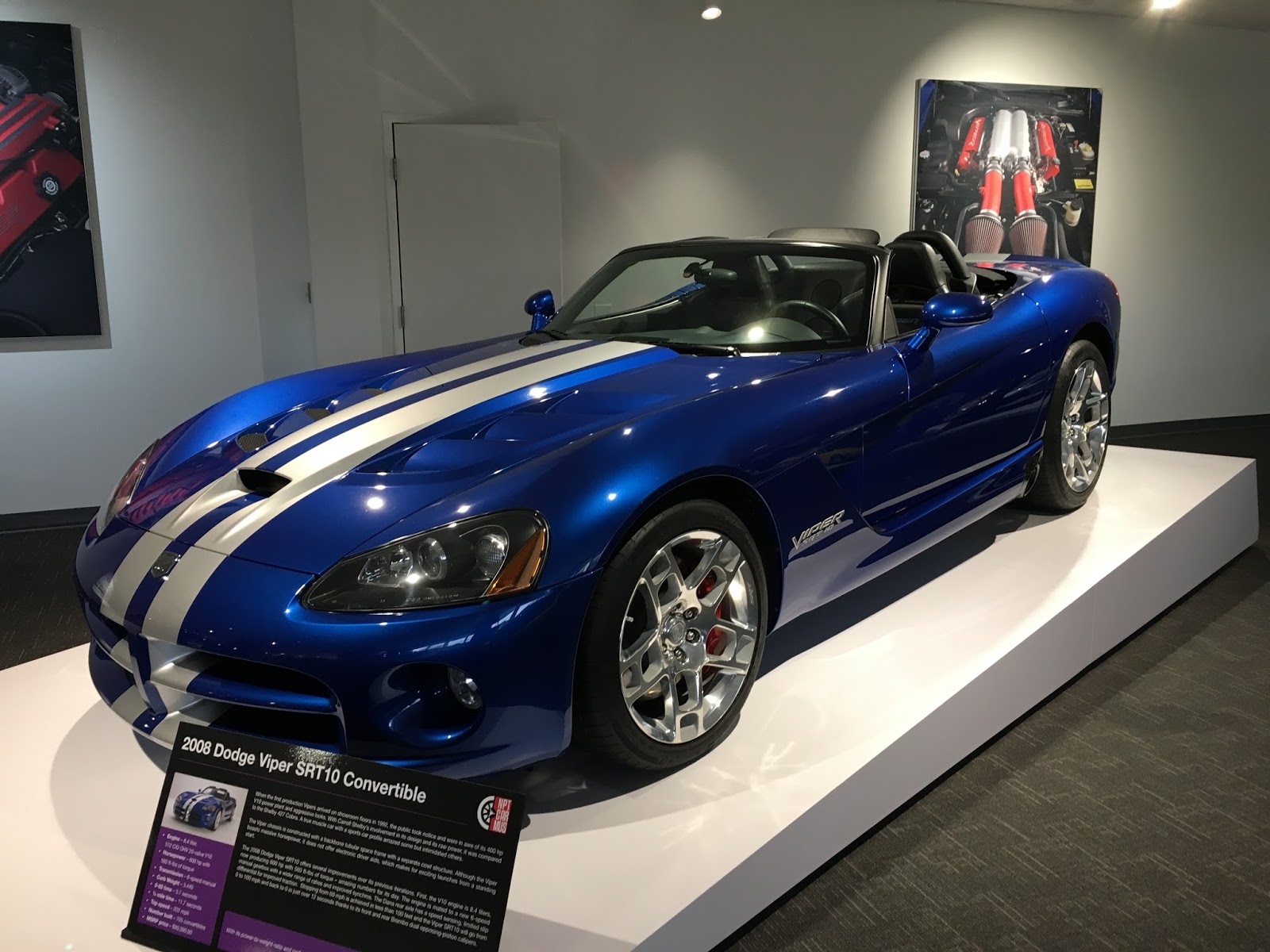 They were completely blown away with the cars which, by the way, are owned by one collector! 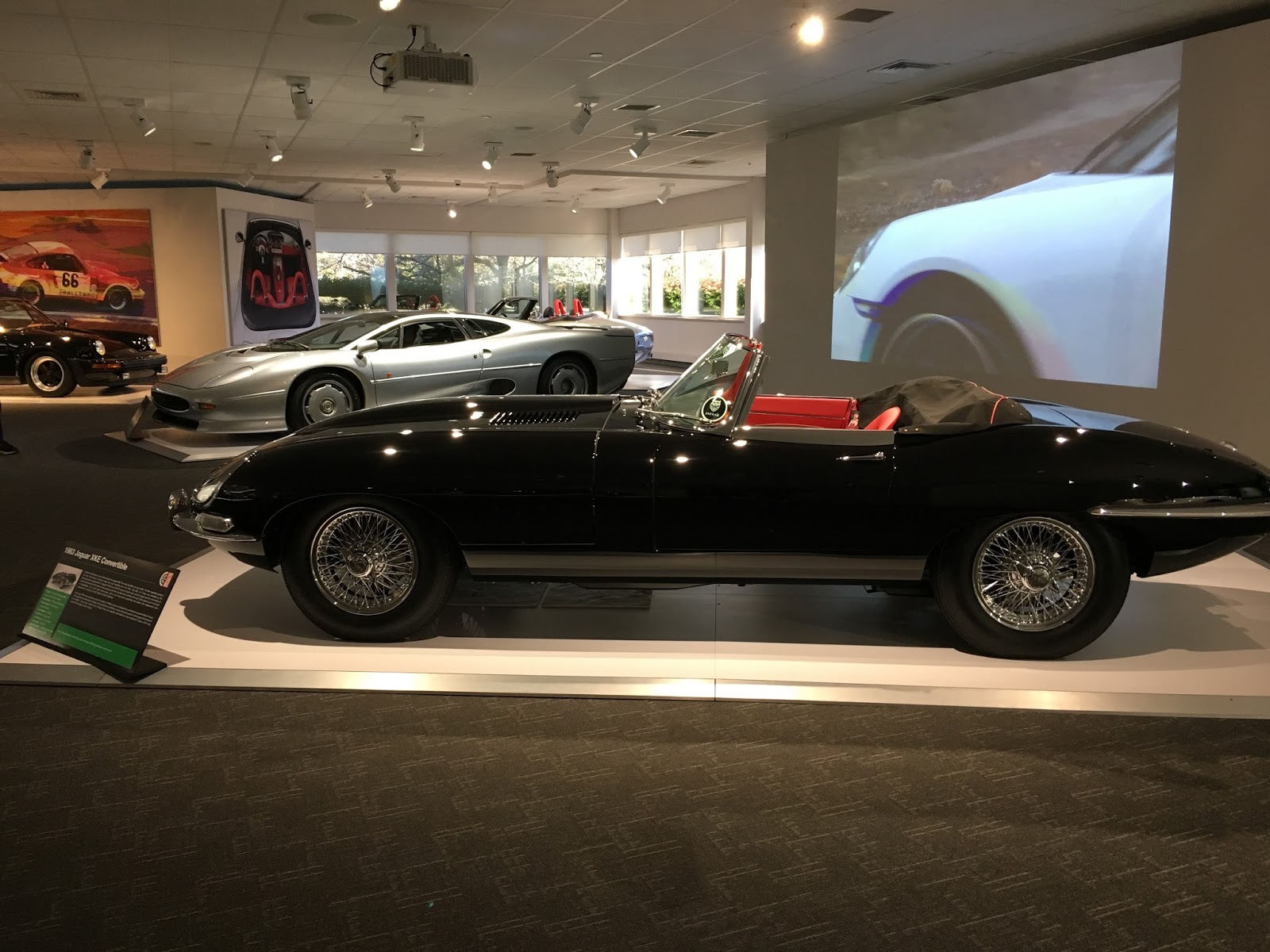 So between the two car museums, the boys definitely got their fix!

And this museum had an added bonus… 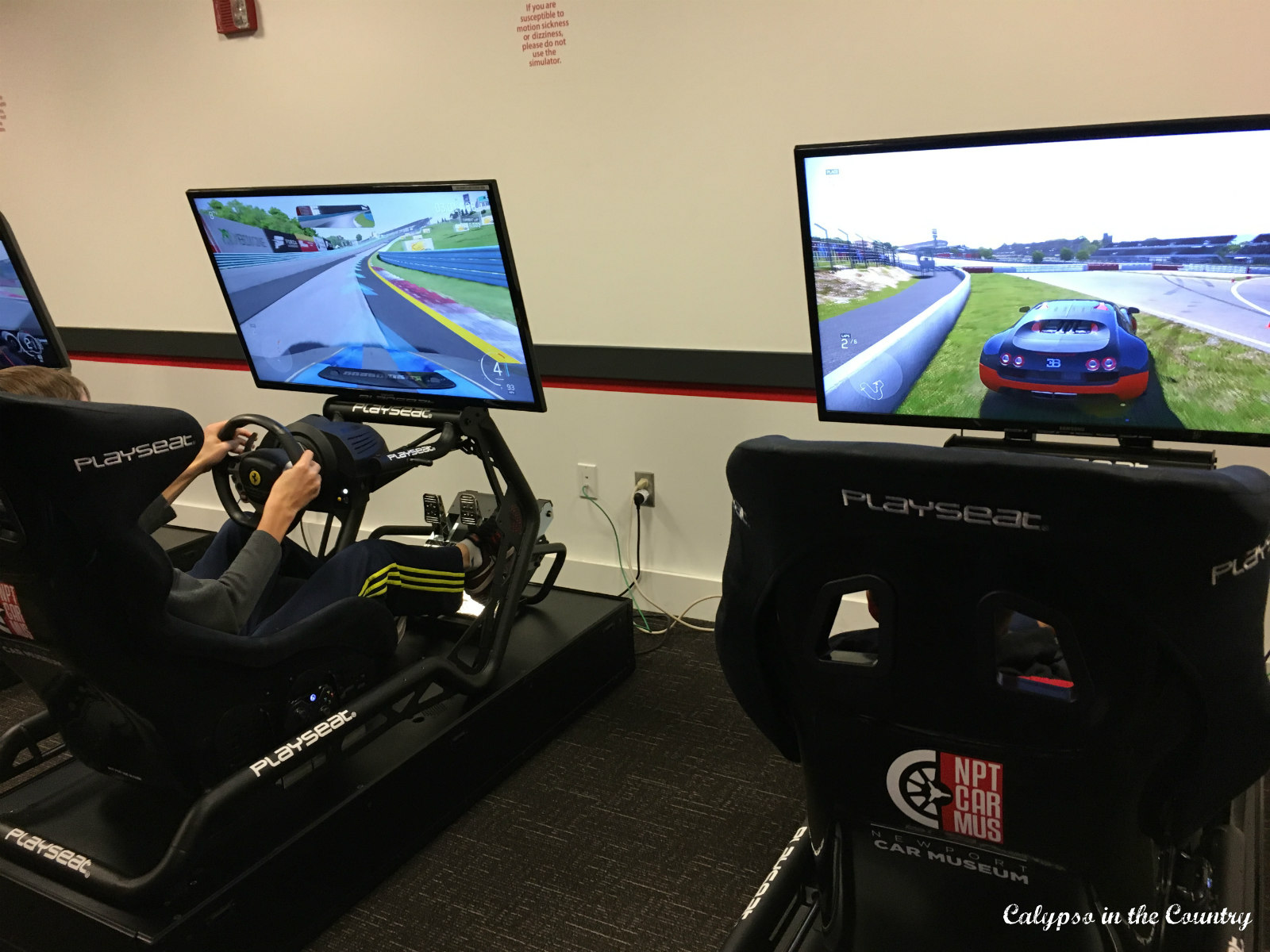 Driving simulators!  This may have been the highlight of their trip!

Afterwards, we spent the late afternoon in the game room at the hotel. 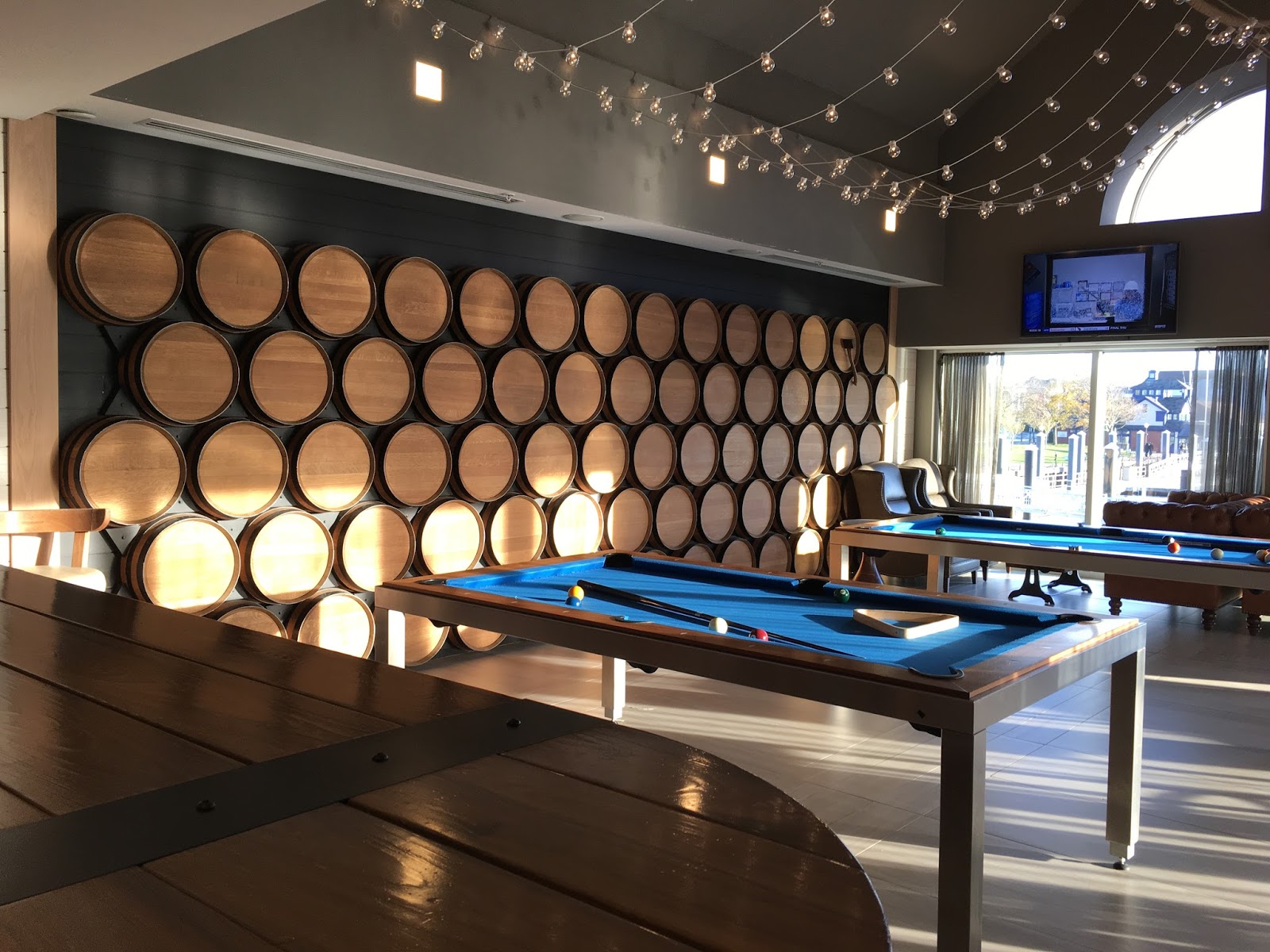 A couple rounds of shuffleboard before dinner. 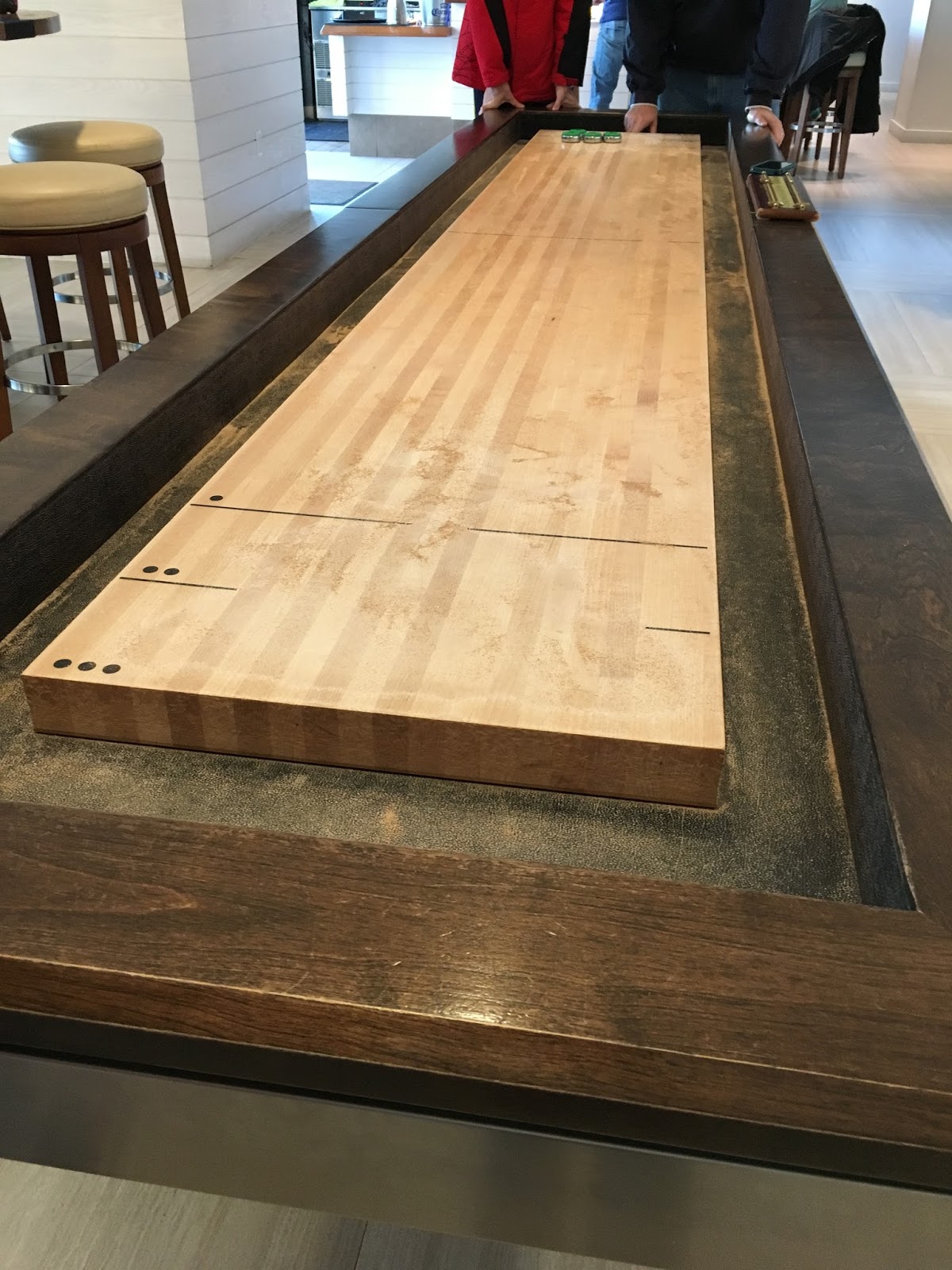 Even though it was freezing that night, we walked to dinner at 22 Bowen’s.  Another delicious meal with our 3rd and favorite clam chowder of the trip!

We wimped out and took an Uber back to the hotel though.  We had enough of the cold by then!

After a big breakfast the next morning, we were on the road.  A short but sweet trip with a bunch of memories made!

We only scratched the surface with all the things there are to do in Newport.  For a few days with kids in the off-season, we made the best use of our time!

Next time, we would love to do these things:

Cliff Walk (Next time we will make it a priority!)

Shopping in the cute waterfront stores

A sunset cruise on a sailboat in the harbor (in summer)

Attend a Polo Match (during the summer season)

Have you been to Newport, Rhode Island in the off season? 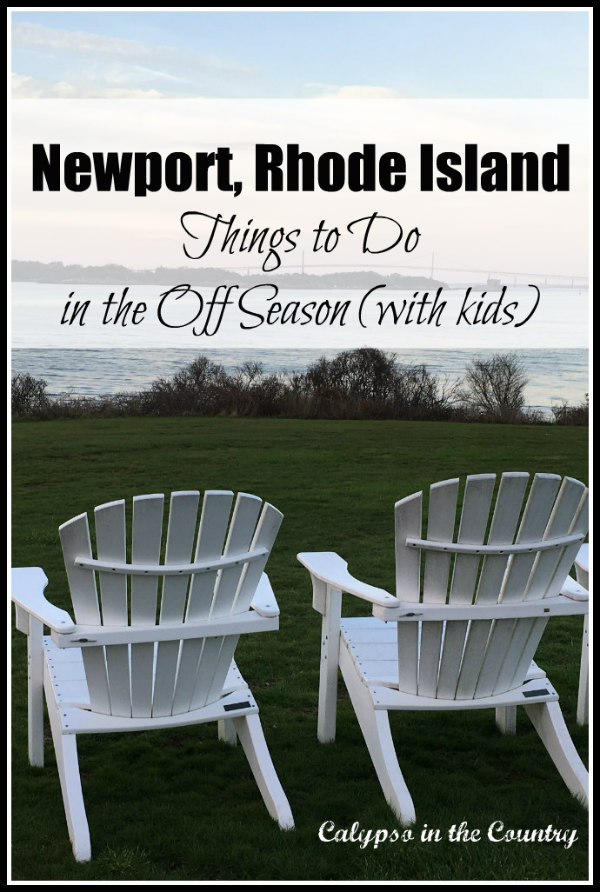