Finally, we are getting to the end of this renovation!  This week, the guys came to install the white subway tile backsplash.  At that point, I still had a couple quick decisions to make.  Did I still think white subway tile with white grout was the way to go?  Did I want to change the backsplash pattern above the stove area…maybe have them lay that subway tile in a herringbone pattern?

Before I tell you how I decided on the pattern and grout color, let’s back track to when I was undecided about which white subway tile to use… 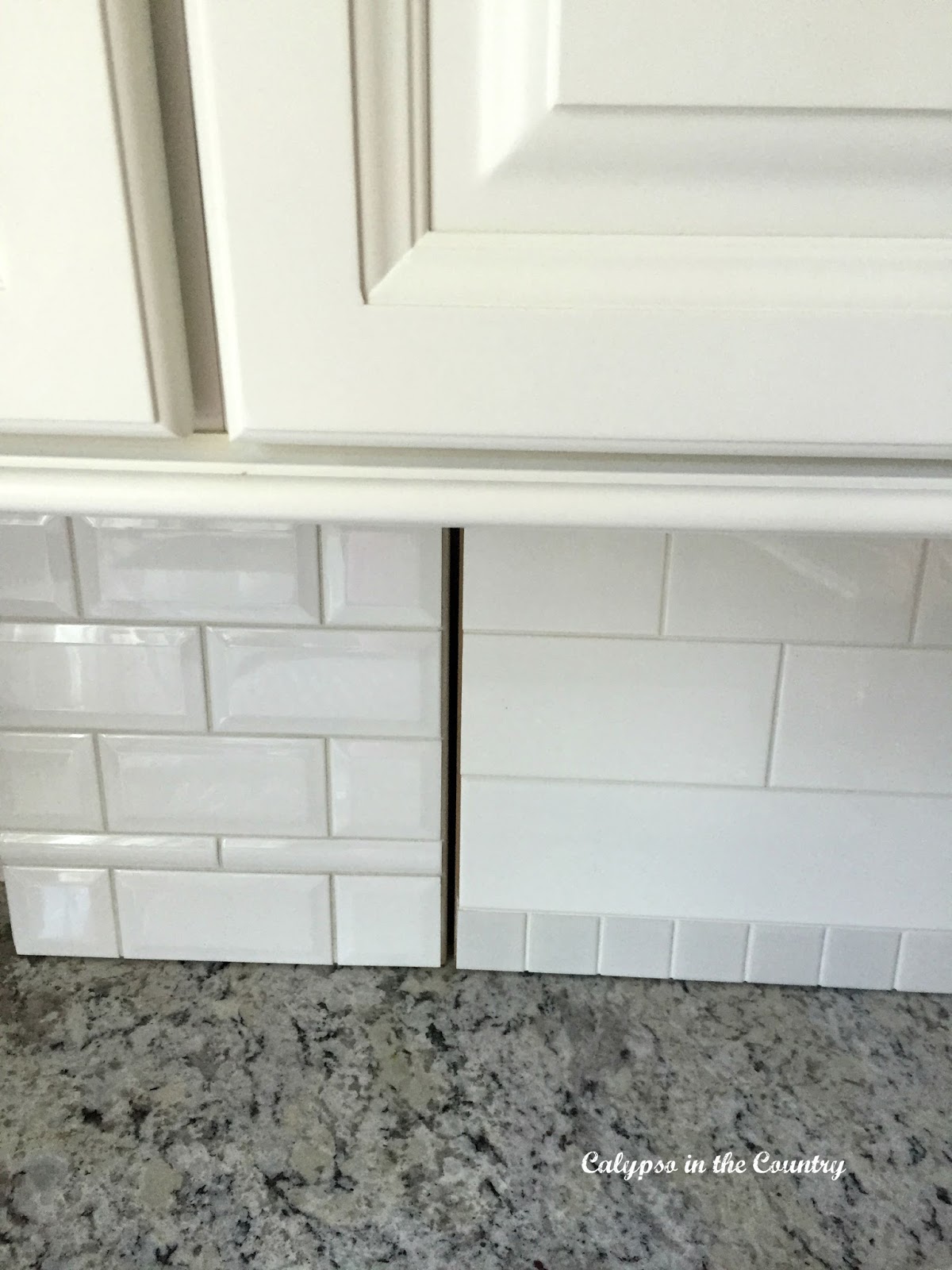 Once I decided to go with glossy white subway tiles, I narrowed my choices down to two styles – beveled and plain.  Even though I love how the beveled subway tiles (on left) add some dimension, I prefer the way the plain flat ones don’t distract from my raised panel cabinets.  Plus, I think the standard plain ones were cheaper…you gotta save where you can! 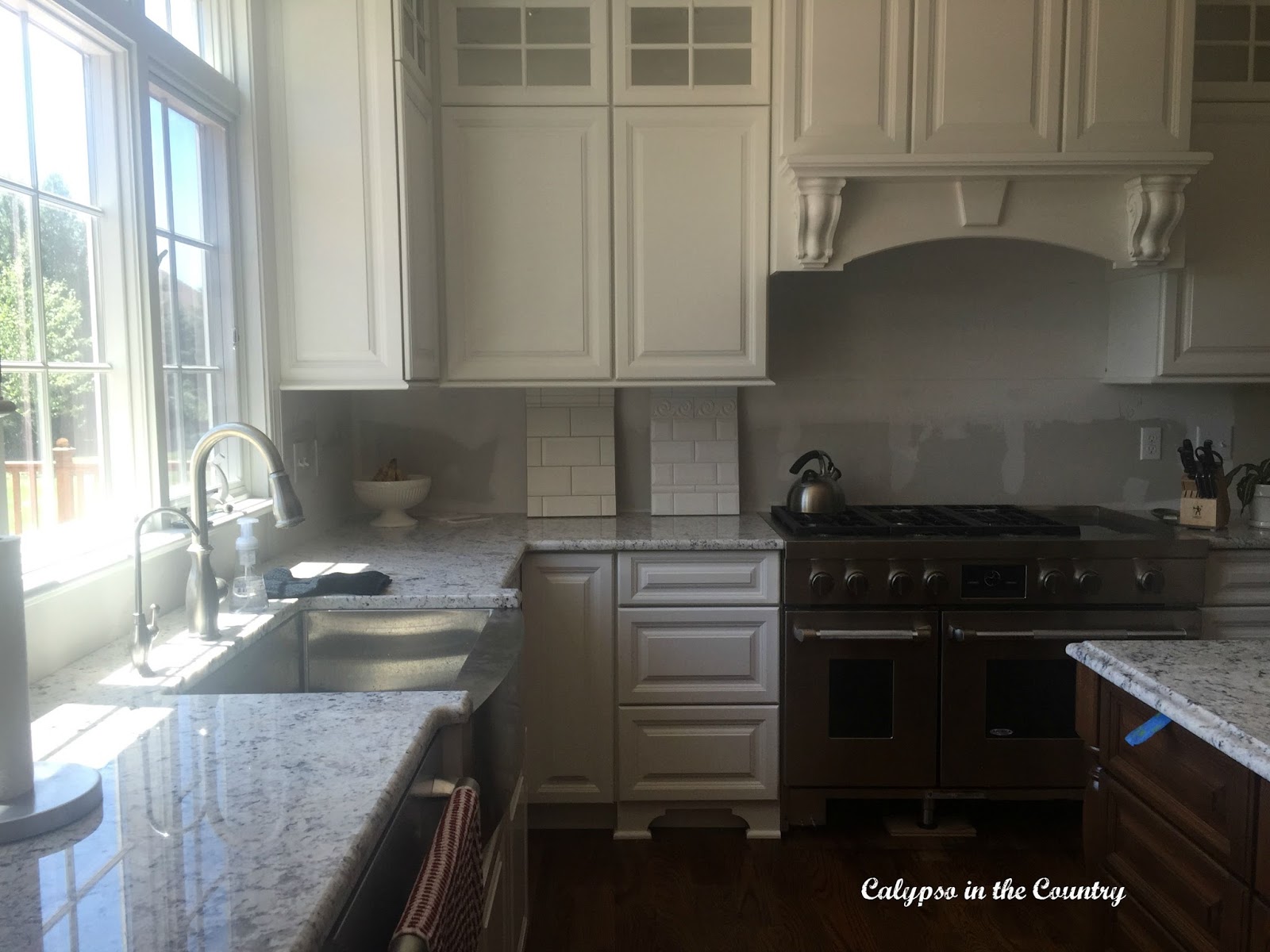 Also, I went back and forth between a cream color and pure white subway tile.  Since my cabinets are White Dove, I had a hard time with that decision.  Finally, I decided on the whiter tiles since they looked better with the White Ice granite.  All along, I knew I wanted to lay the tiles in the traditional subway tile pattern.  At least that decision was easy!

But then there were more decisions… 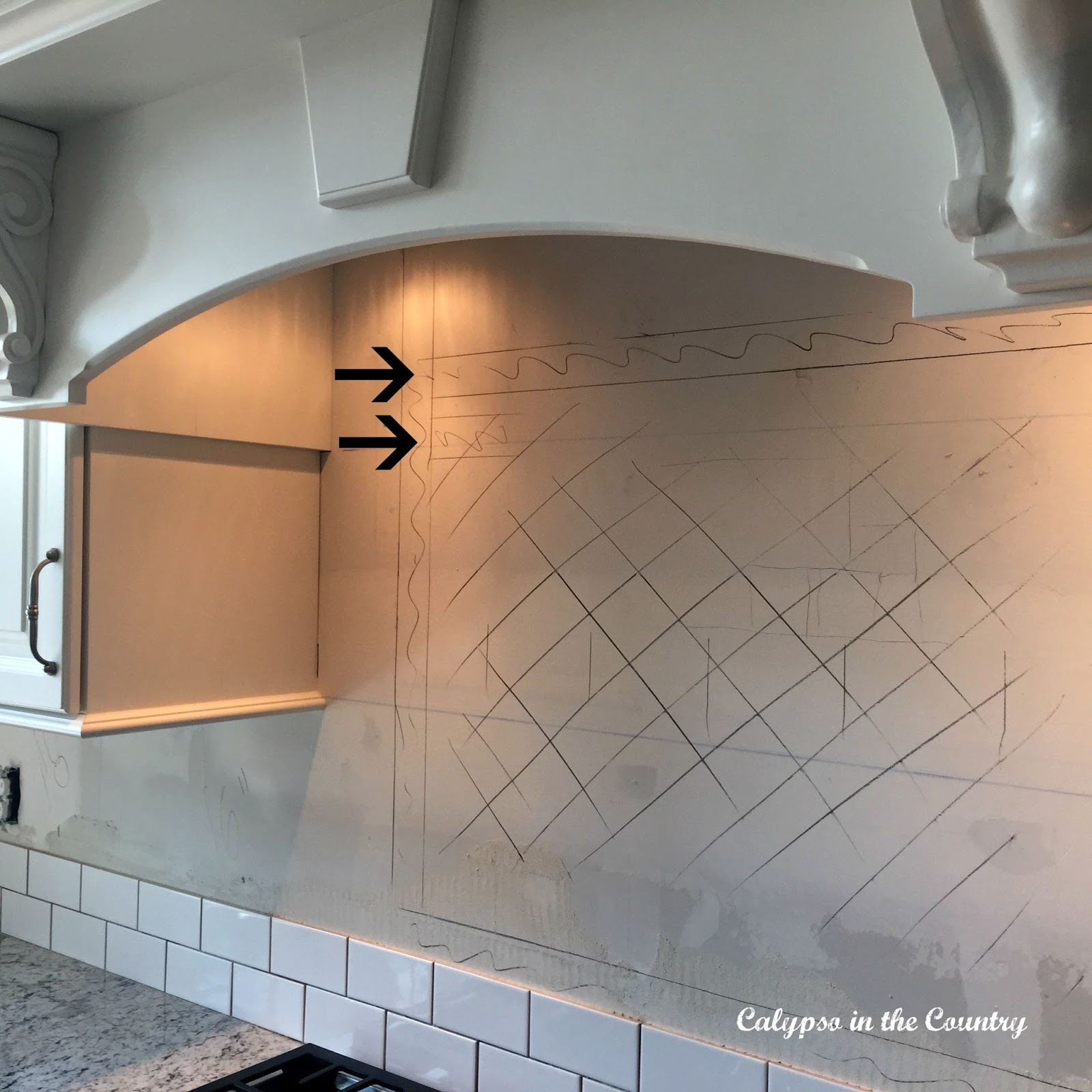 Originally, I had planned to just continue the subway tile in the traditional brick pattern for the area above the stove.  At one point, I think my kitchen designer had suggested doing a creative tile pattern in that area but I wasn’t ready to commit to anything early on.  Once I was ready to purchase the subway tiles, I consulted with Jessica from my favorite tile store, Charles Tiles.  She also suggested we try something different over the stove and recommended that we set the subway tiles in a herringbone pattern with a border.

At that point, I thought it sounded like a good idea so she emailed me a drawing for the contractor to follow.  Of course, at the last minute I panicked because I felt the whole boxed in section looked too big.  Basically, I was worried you wouldn’t see the top border from a distance because of the range hood.

As you can see in the photo above, my two options for the top border are marked by the arrows.  These were the only two options if we wanted to avoid cutting the border tiles which would look weird.  All along, I was leaning towards the original plan but I called and emailed the tile store just to make sure it made sense.  Jessica agreed that going with the top line would look better so we went with it. 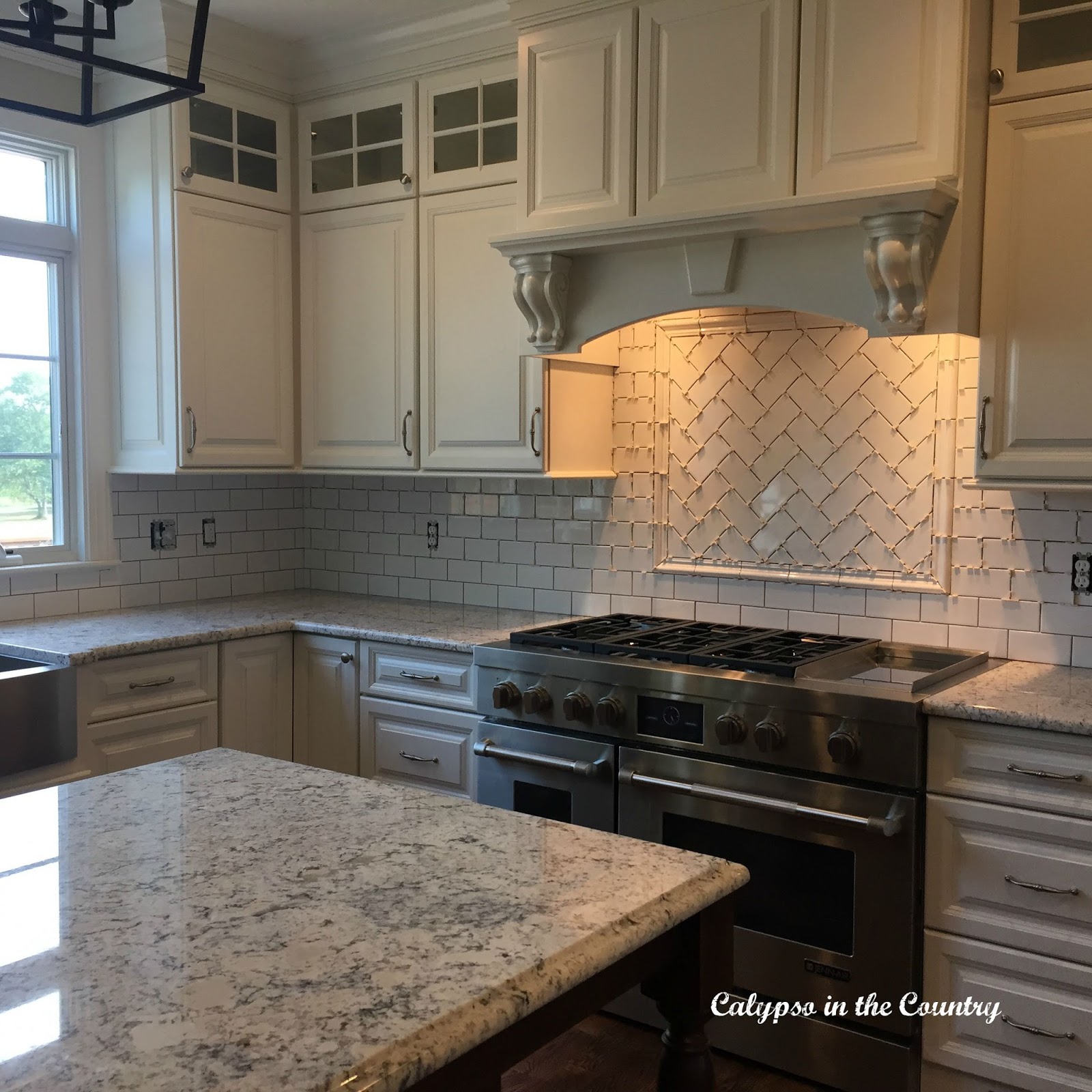 Overall, I was happy with the decision.  Now when you are in front of the stove or sitting at the island, you see the whole box.  When you are standing across the room, the top is a little hidden behind the range hood, but it’s totally fine!  If we had lowered the top border, it may have looked a little squished. 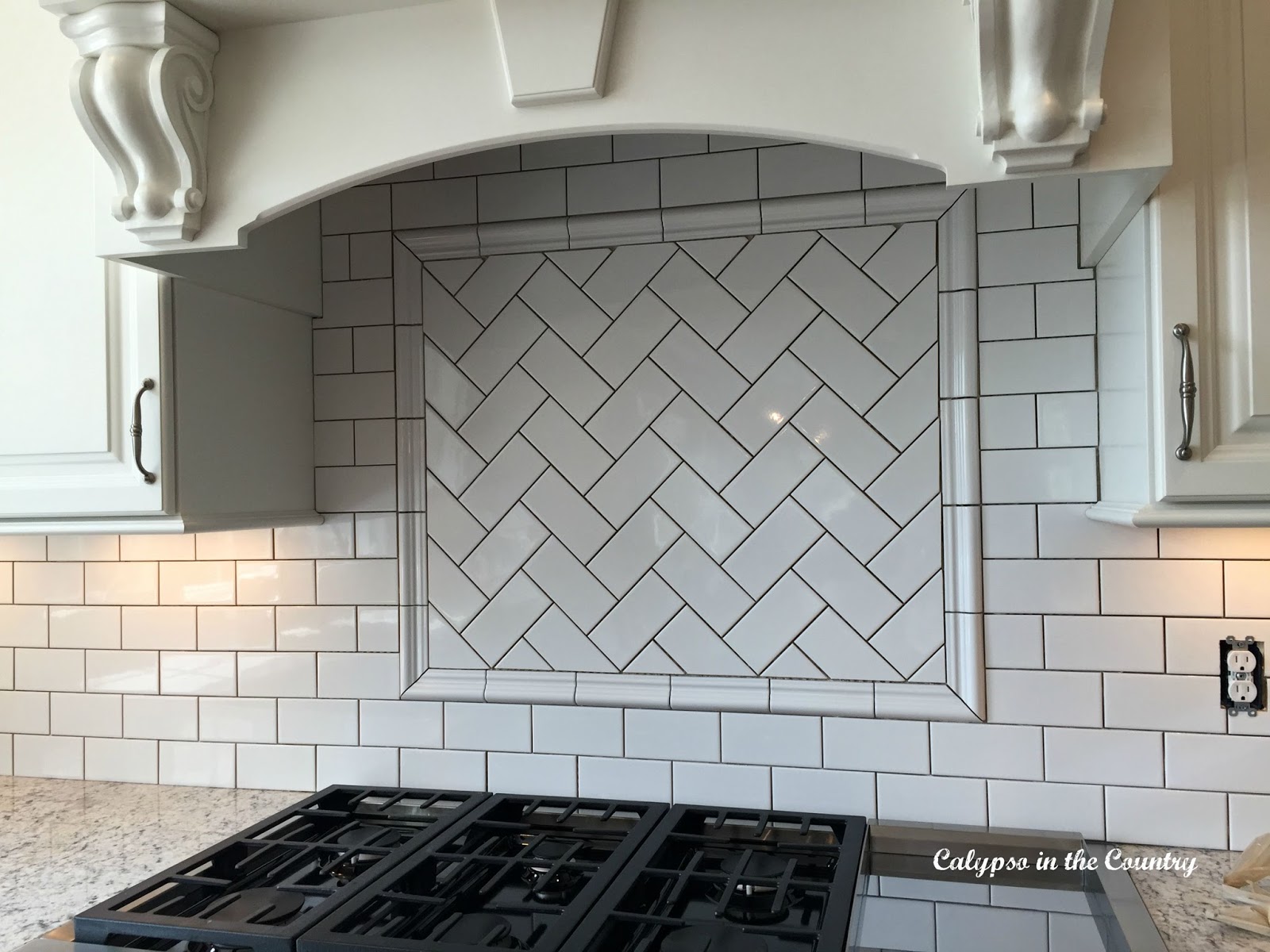 When the guys left for the evening I stared at the non-grouted tile for awhile.  Of course, I kind of fell in love with the idea of maybe doing a more noticeable grout…like a gray grout.  Maybe I was just getting used to looking at the tile this way but wow, it was definitely an option!  Using a gray grout would give a more modern farmhouse look to the kitchen.  If we used a gray grout for the backsplash, the herringbone pattern over the stove would stand out more as well. 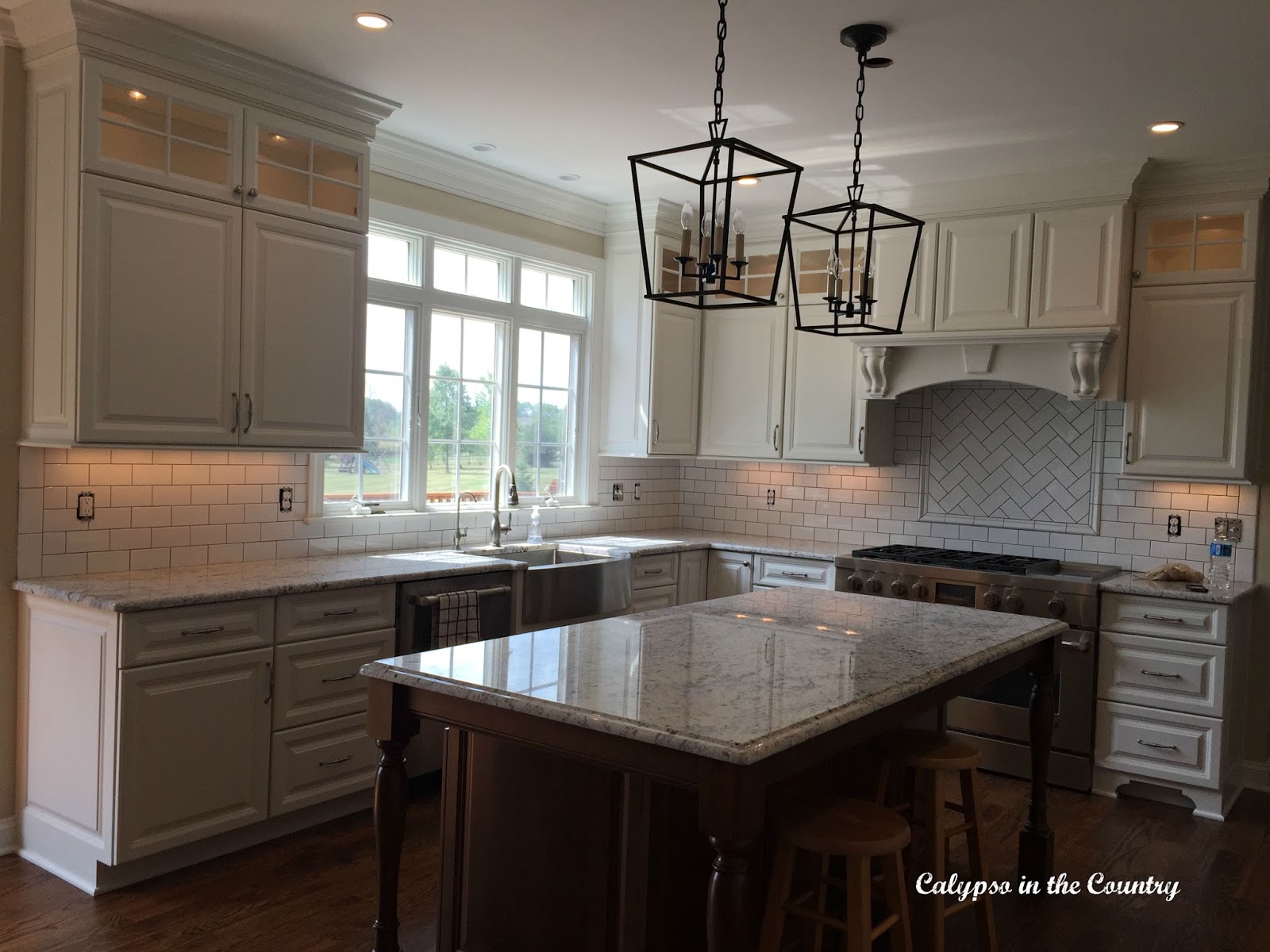 Here is the room from a distance before they applied the grout.  Sure, I could have gone the white subway tile with gray grout route…Plus the gray would pick up the colors from the granite.

But in the end, I went with my original plan… 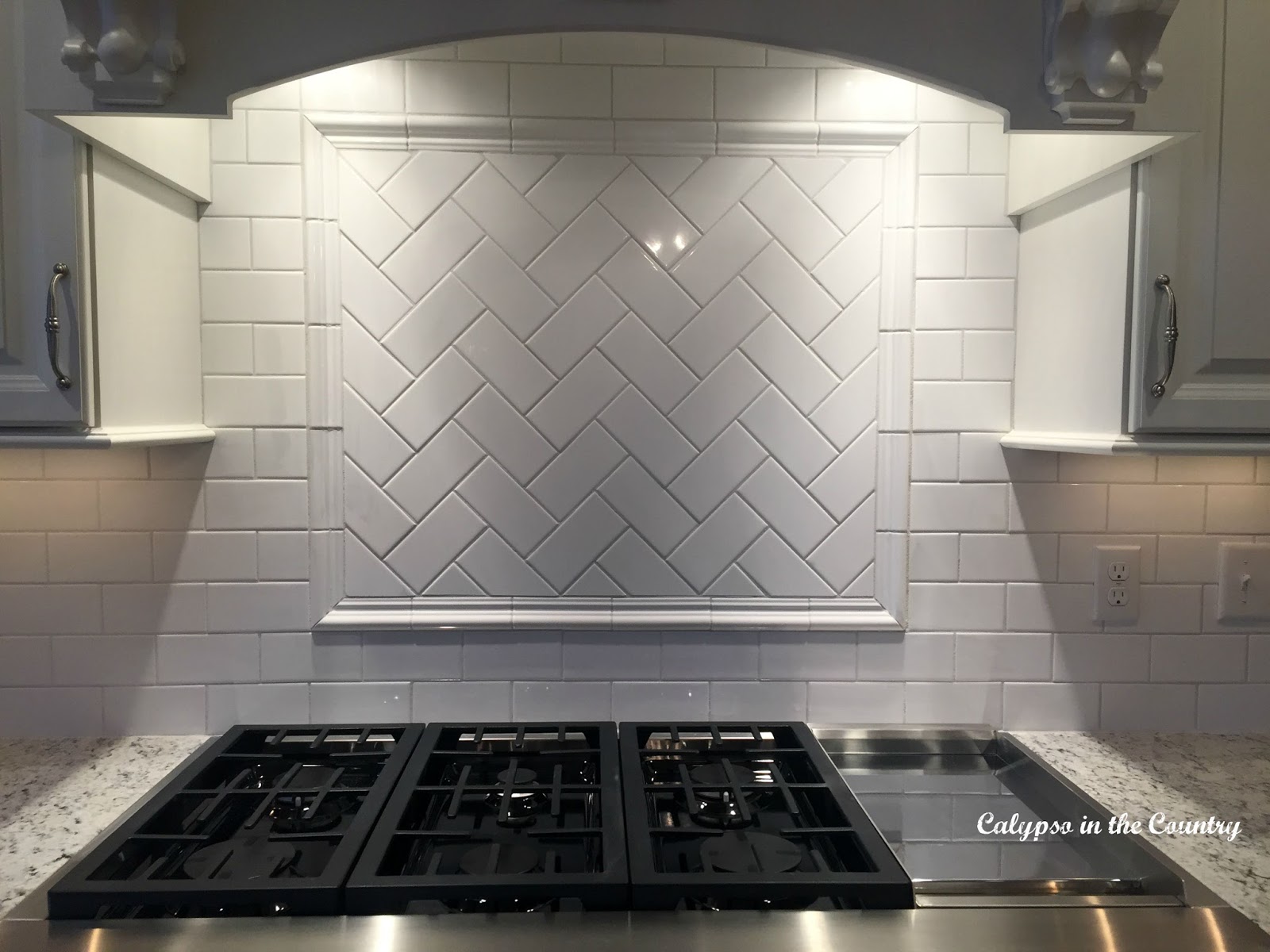 Here is the finished white subway tile with white grout.  After considering using a gray grout, I decided against it.  In the end, I didn’t want the grout color to compete with the granite.  Our white ice granite is busy enough on its own.  Plus, I think the white subway tile with the white grout is more timeless and the herringbone pattern in the backsplash is more subtle. 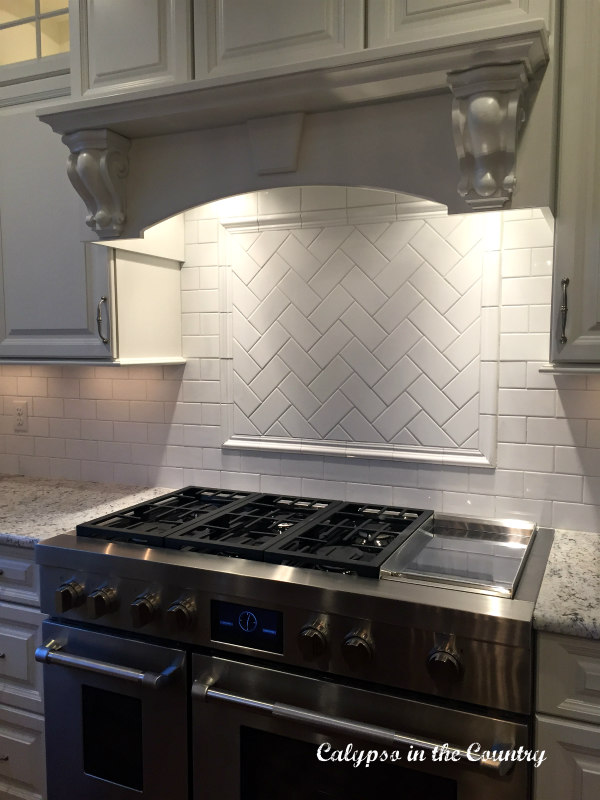 Seriously, I could not be happier! 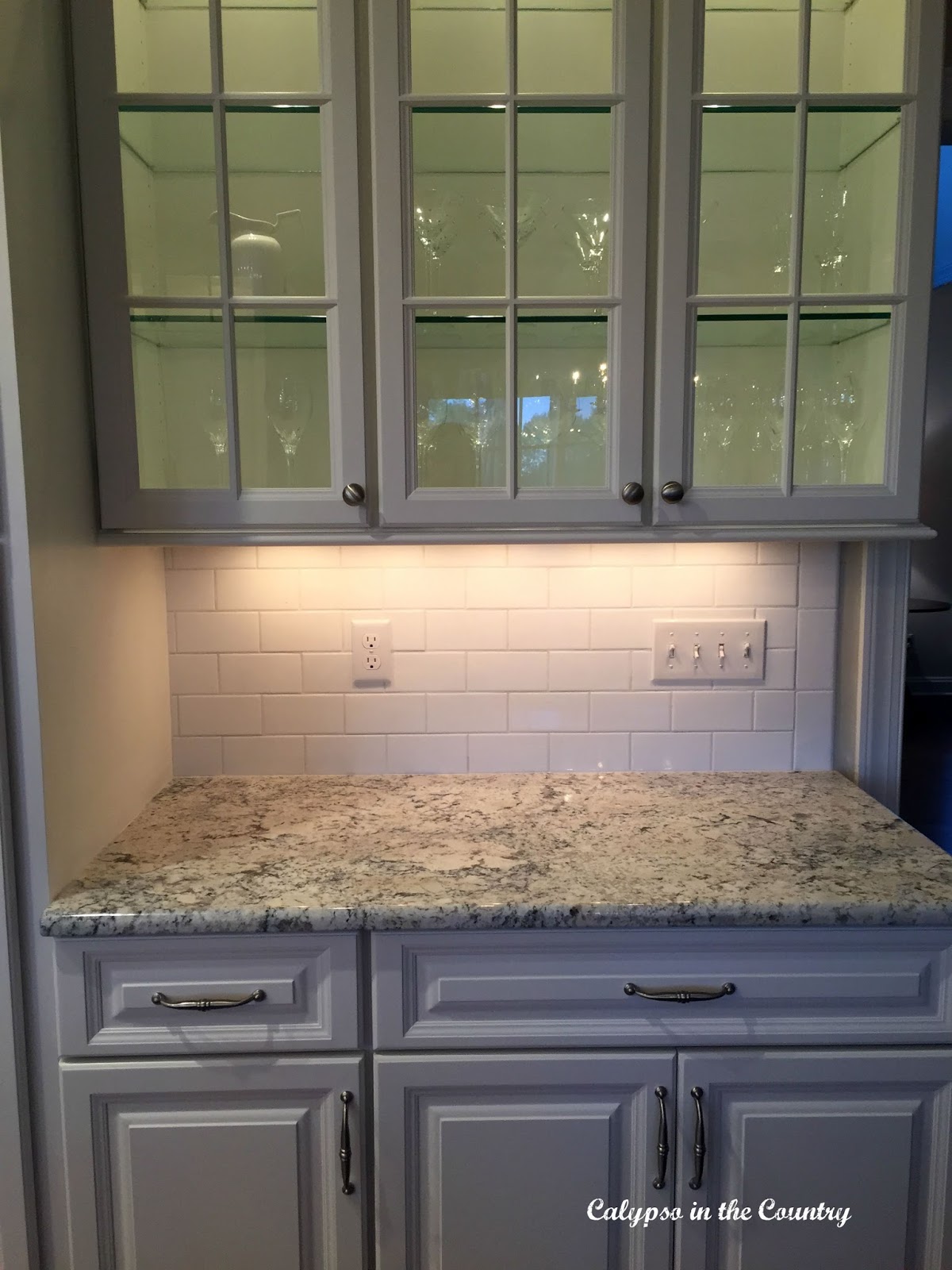 As things are moving along, I am starting to think how much fun it will be to set up a little cocktail area over here!  (Some cocktails will definitely be in order after this renovation!) 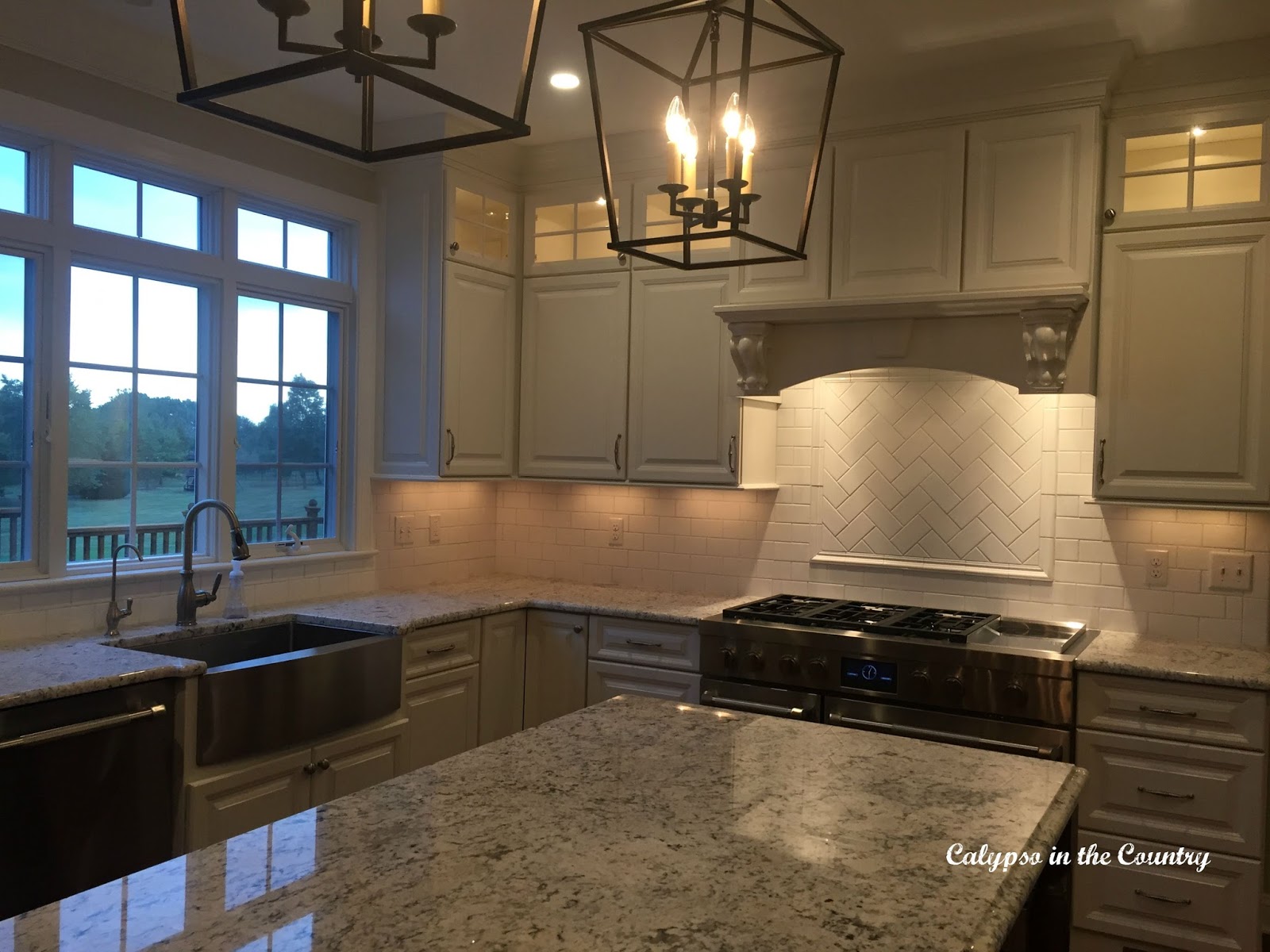 Here is the kitchen last night.  I love the glow of the subtle under cabinet lighting and the way it highlights the white subway tile.

Only a few more small details and we will be done!! 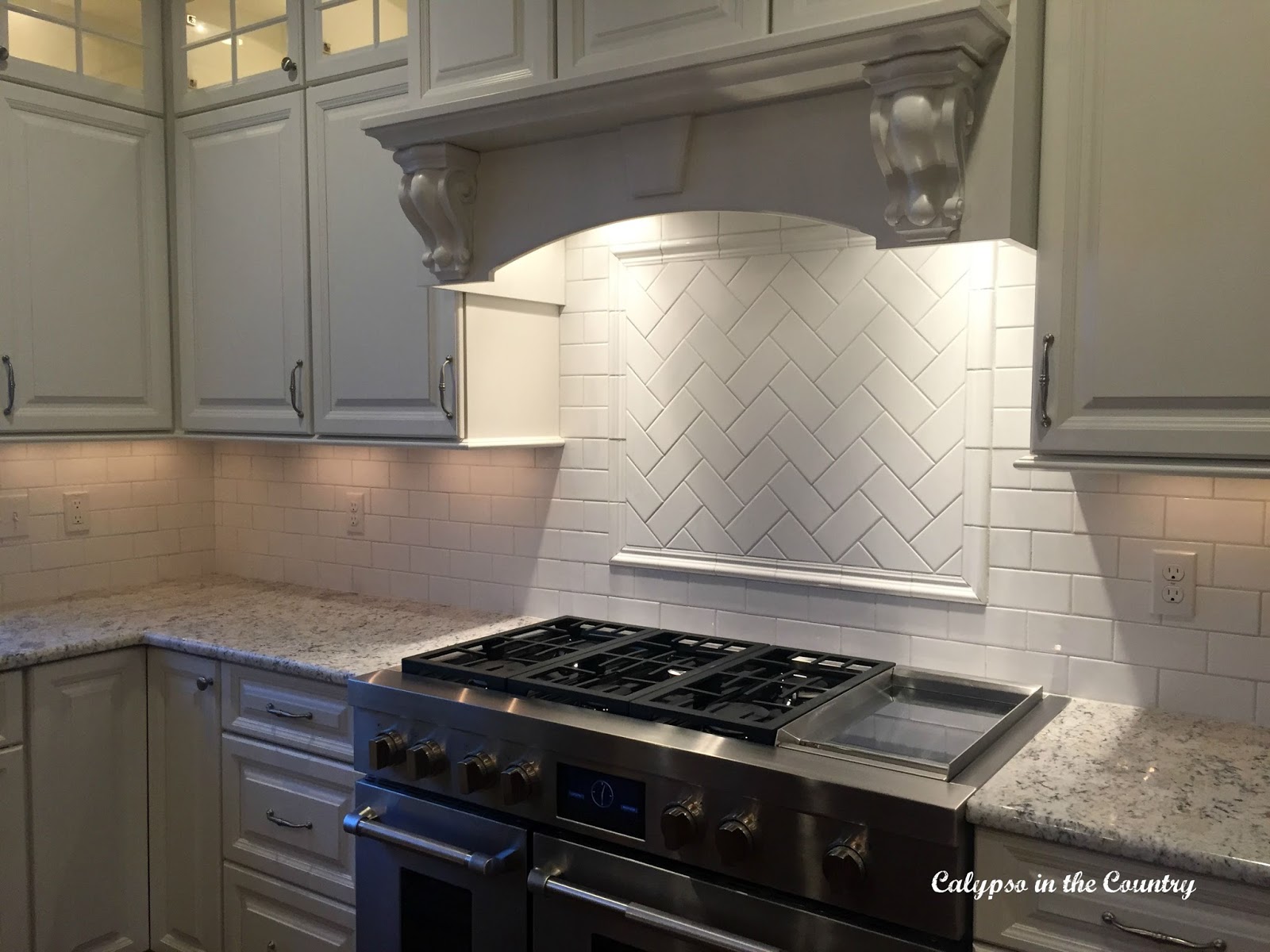 Well, I guess it’s time for a dinner party!

You also might notice in the photo above that we switched the handle on that door in the left corner.  Thank you for all of your advice on that.  You were all so right!

*If you are following along with my kitchen renovation, here is the finished kitchen reveal!

Would you have chosen the white subway tile with white grout? 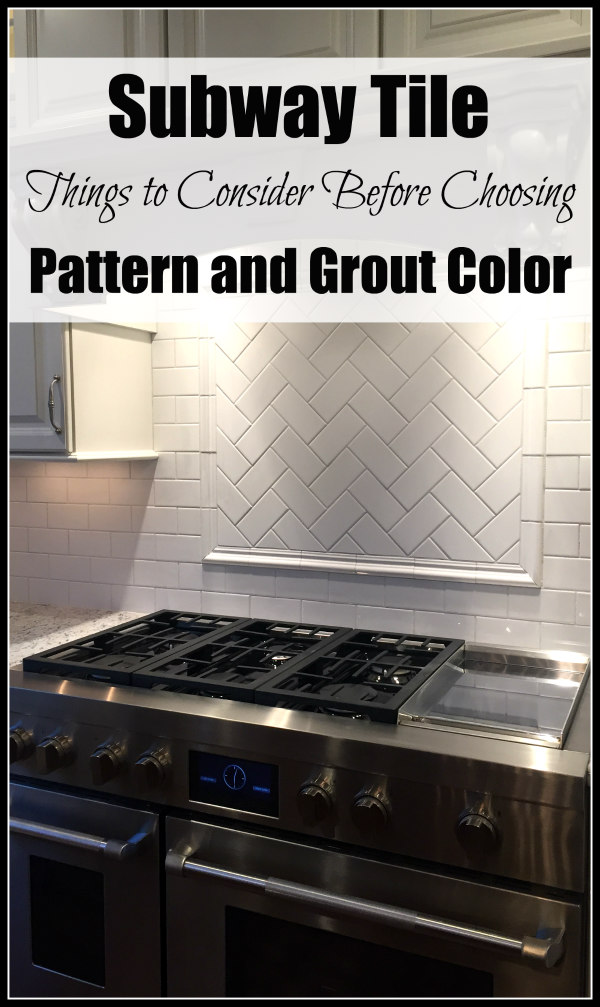